CCTV captured the moment man armed with a meat cleaver and boy, 17, chased father-to-be, 25, and stabbed him to death with a kitchen knife in revenge killing after bitter family feud

CCTV shows the horrifying moment a teenager hunted down and murdered a father-to-be in broad daylight with a huge knife in a revenge killing.

Karl Marler, 17, chased down 25-year-old Charlie Elms armed with a kitchen knife after his family’s property in Oldham, Greater Manchester came under attack during a petty feud.

Manchester Crown Court heard the two rival factions had fallen out after a drunken row that led to Elms and a group of friends armed with weapons vandalising the home owned by Marler’s family.

After throwing an e-scooter at the window and damaging the front door and a vehicle parked nearby, Elms and a friend tried to flee on foot as they were chased by the group of teenagers.

During the short pursuit, Elms slipped and fell but as he got to his feet Marler plunged the 15 inch blade into his back.

Elms suffered fatal wounds and died at the scene. His girlfriend would later give birth to their child Archie just three days before his funeral.

On Thursday, Greater Manchester Police issued dramatic CCTV images of the last moments of Elms’ life as Marler was jailed for a minimum of 16 years for murder. 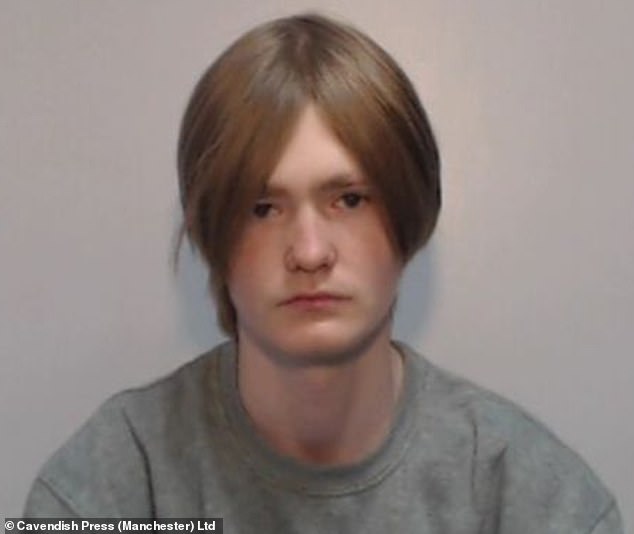 Karl Marler, 17 (pictured) showed ‘no remorse or regret’ after he plunged a 15in kitchen knife into the back of 25-year-old Charlie Elms following a dispute in Oldham 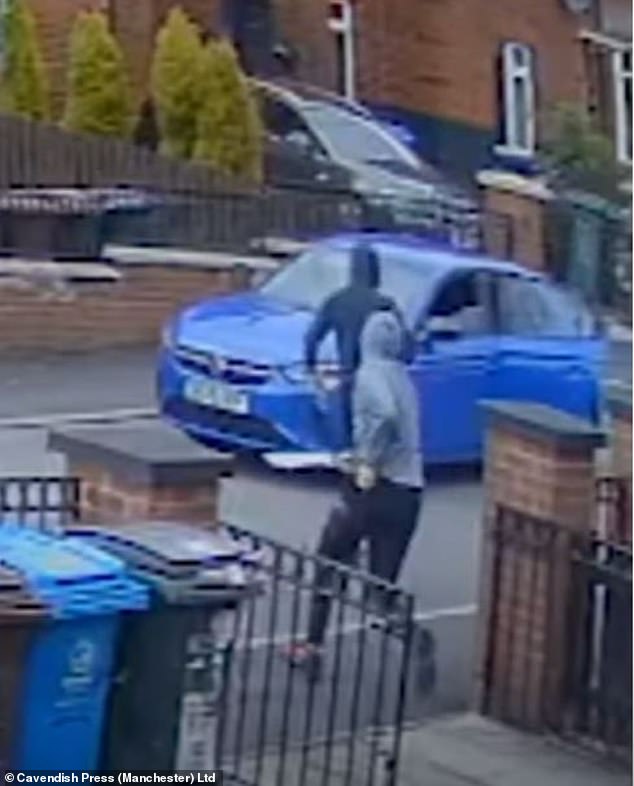 The teenager chased down 25-year-old Charlie Elms armed with a kitchen knife after his family’s property in Oldham, Greater Manchester came under attack during a petty feud 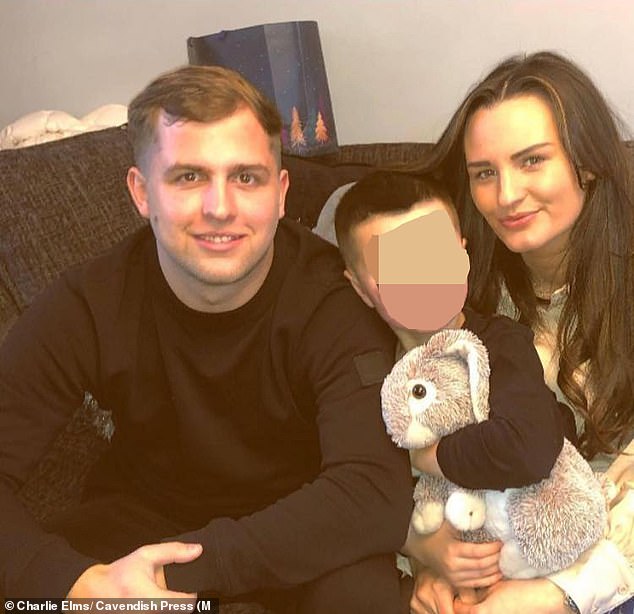 Charlie Elms, 25, (left, with his partner Demi Leigh O’Shea) slipped and fell as he was pursued by Marler, who plunged a 15in blade into his back, killing him at the scene in Oldham

The tragedy occurred after the two men had got caught up in a trivial row between two friends linked to Marler’s aunt at her home in Limeside, Oldham, Greater Manchester.

One of the friends had been asked to leave the house and complained of ‘losing face’ and it sparked a bitter dispute in the small community which created ‘allegiances and loyalties’ between rival families, Manchester Crown Court heard.

In the weeks before Elms’ death, windows at Marler’s aunt’s house had been smashed and later Marler himself and two other men went to the another house and kicked the door in, shouting for the occupant’s partner.

Matters came to a head on May 26 this year when Elms and six other men pulled up in a blue Vauxhall Corsa car outside Marler’s aunt’s home and began attacking the front door with a machete and a child’s scooter which they picked up from the front garden. 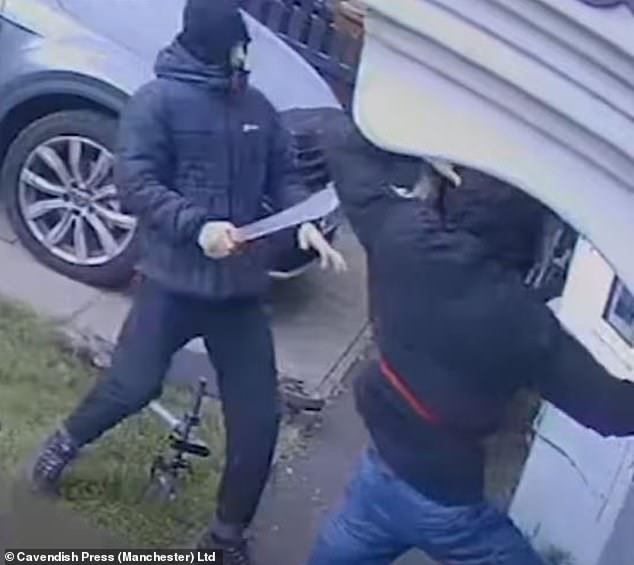 Charlie Elms and a group of accomplices attacked the home owned by Marler’s family in Oldham, before they were chased away by the teenager and his gang 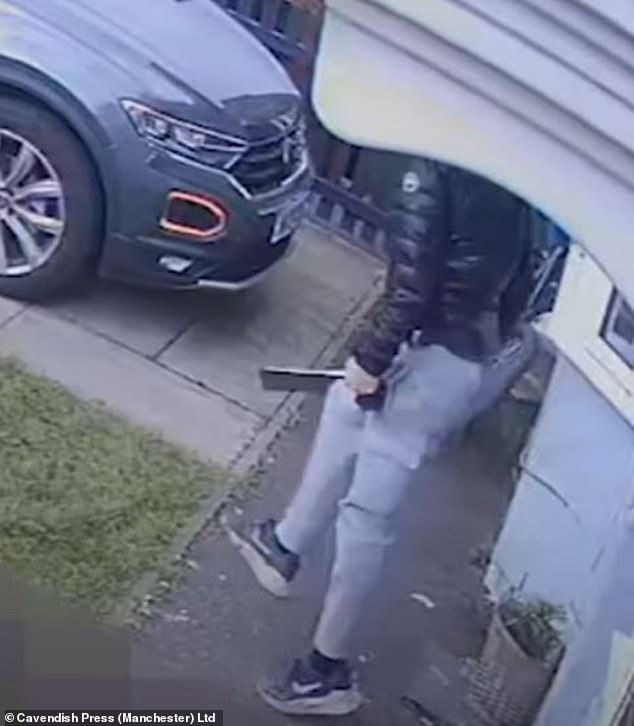 One person inside the house, a 16-year-old, emerged from the front door wielding a large meat cleaver 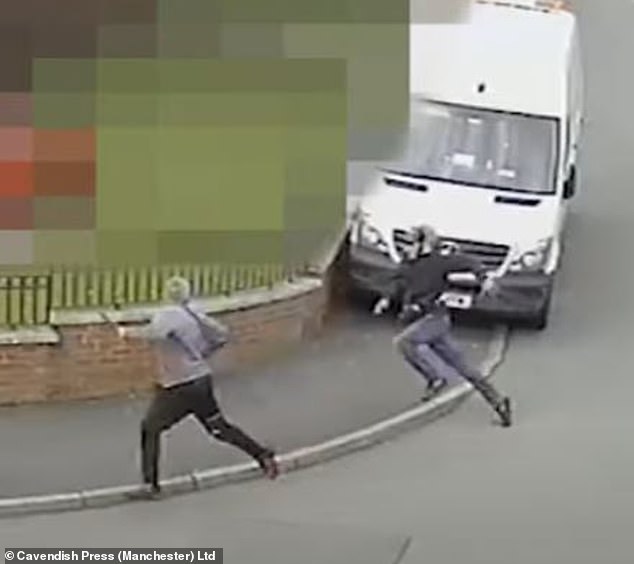 Elms (left) tries to flee from a pursuing Marler, but slips and falls. He is then stabbed in the back with the 15ins blade 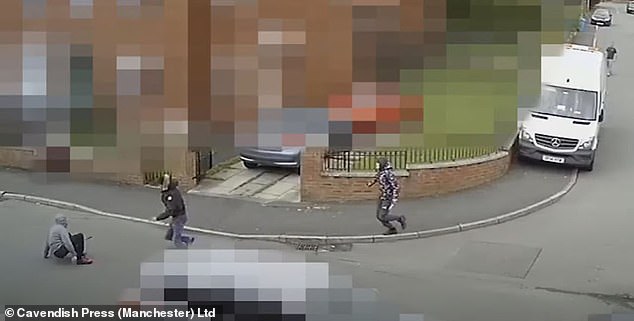 As the teenagers rush over to Elms (on the ground, left) they prepare to attack him with knives

Marler who was at the house with three other friends then emerged from the house armed with knives and a meat cleaver and forced Elms and his friends to flee.

The Corsa sped away but Elms and one of the gang were left behind and they sprinted down the road in a bid to get away. As they ran round a corner both lost their footing and Elms dropped the machete.

He was stabbed as he was about to get to his feet and bled to death despite efforts to save him. 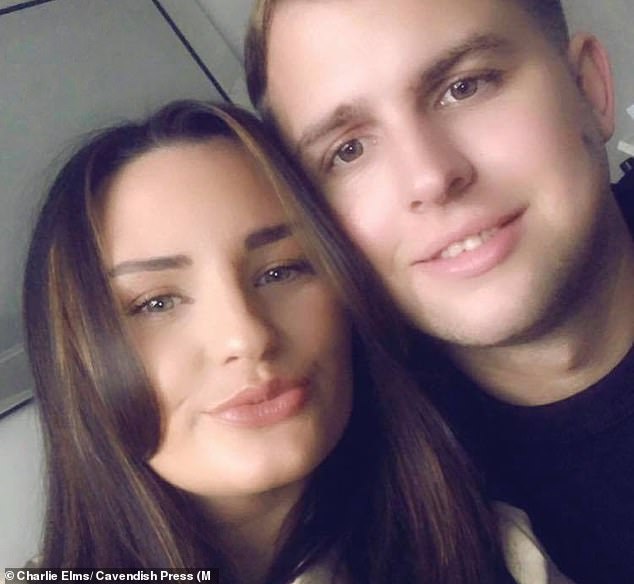 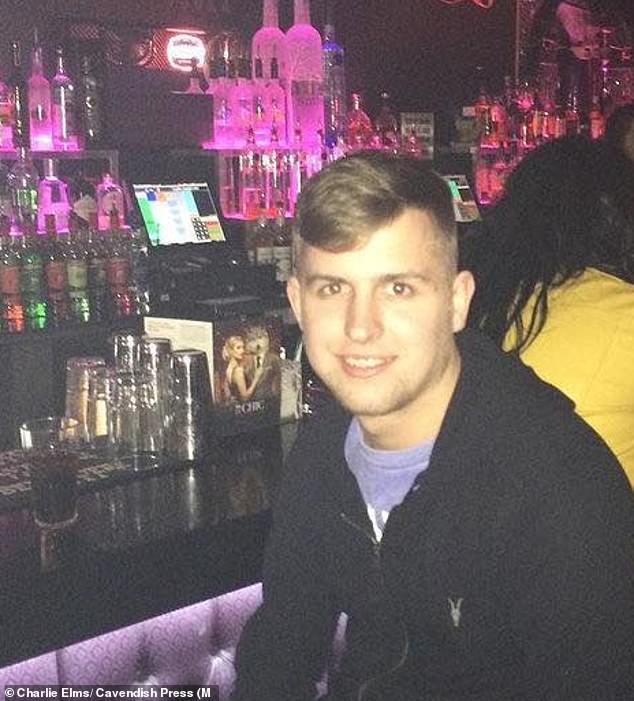 Elms, pictured above, was stabbed as he was about to get to his feet and bled to death despite efforts to save him

In a statement Elms’ partner Demi Leigh O’Shea said: ‘The life I thought was in front of me was absolutely destroyed. I knew he was the one, my soulmate. He was looking forward to being dad, it’s all he talked about.

‘Words do not explain the void and emptiness in my life. It is suspected I am suffering from PTSD. Accepting Charlie has gone is the hardest part.

‘The day I went into labour should have been a special day. Instead this day was horrific. Then three days later it was Charlie’s funeral.

‘At the funeral I caught Covid-19 feeling so empty and upset and I have not enjoyed being a new mum.

‘I resent the fact someone has taken this very precious time away from him. I remain in this constant state of hurt and upset… The grief is unbearable.

‘I want the court to know that no matter how long the person who did this spends in prison, for me I don’t see myself ever feeling better. I am lost without Charlie in my life.’ 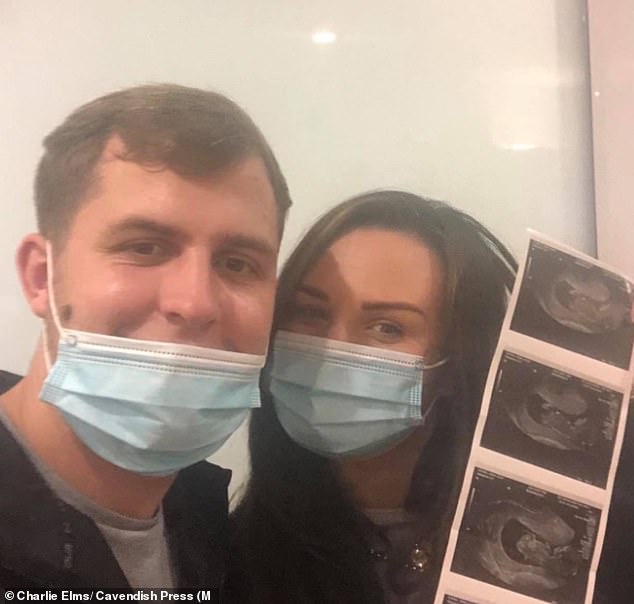 Demi Leigh O’Shea (right) was pregnant at the time of Charlie’s death. She would eventually give birth just days before his funeral

Marler picked up the discarded machete after the stabbing and went on the run ringing his mother to say: ‘Mum I can’t tell you, I’m going on the run. I love you and I’m going to ditch my phone.’

He was arrested on June 16. When asked how he felt about Elms’ death, Marler said: ‘I am upset and angry at myself.’

He denied murder but was convicted after a trial and was ordered to be detained for life At Her Majesty’s Pleasure. He will serve a minimum of 16 years behind bars before he can be considered for release on parole.

Sentencing Judge Patrick Field QC told him: ‘This was an unpleasant and pointless feud. You were allied to one group, Elms was part of the other and there was violence, threats and vandalism the weeks before.

‘That day you were expecting trouble and armed yourself to exact revenge. You had decided yourself to seek retribution and this was apparent from your relentless pursuit of Charlie Elms.

‘You undoubtedly had several opportunities to desist but the fact is you were utterly determined to make somebody pay for what had occurred.

‘There was not a hint of sorrow, regret or remorse for taking another man’s life. Whatever Charlie Elms might have done or did on May 26, he was still a young man when he died.

‘He had a partner of 18 months and was looking forward to becoming a father himself. His death was undoubtedly a tragedy.

After the case Det Ch Insp Carl Jones of Greater Manchester Police said: ‘This was a shocking episode of violence which very sadly led to the death of a 25-year-old man.

‘Charlie’s death at such a young age is something no family should ever have to experience and all our thoughts are with them as they continue to process this horrendous ordeal.

‘Knife crime can cause misery and fear to our communities and incidents such as these can have a devastating impact on not only those close to the family but the wider community and neighbourhood.

‘I hope today’s sentencing sends a stark warning and message that if you are caught using or carrying a knife then you will face the consequences of your actions and justice will prevail, as we have seen today.’

Two 16-year-old boys were given referral orders at earlier hearings.