The Pentagon said on Tuesday a recent Chinese missile launch in the South China Sea was ‘disturbing’ and contrary to Chinese pledges that it would not militarise the disputed waterway.

The South China Sea is one of a growing number of flashpoints in the US-China relationship, which include a trade war, US sanctions and Taiwan.

China and the United States have repeatedly traded barbs in the past over what Washington says is Beijing’s militarisation of the South China Sea by building military installations on artificial islands and reefs. 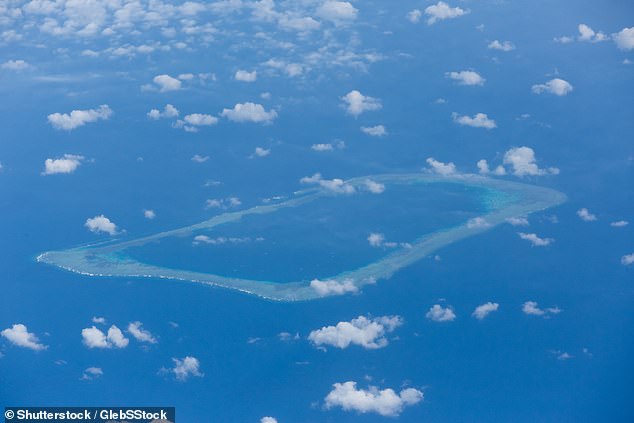 Aerial view on the The Spratly Islands, one of the major archipelagos in the South China Sea. A US official, speaking on the condition of anonymity, said China tested multiple anti-ship ballistic missiles over the weekend near the Spratly Islands

A US official, speaking on the condition of anonymity, said China tested multiple anti-ship ballistic missiles over the weekend.

‘Of course the Pentagon was aware of the Chinese missile launch from the man-made structures in the South China Sea near the Spratly Islands,’ Pentagon spokesman Lieutenant Colonel Dave Eastburn said.

‘I’m not going to speak on behalf of all the sovereign nations in the region, but I’m sure they agree that [China’s] behavior is contrary to its claim to want to bring peace to the region and obviously actions like this are coercive acts meant to intimidate other [South China Sea] claimants,’ Eastburn added. 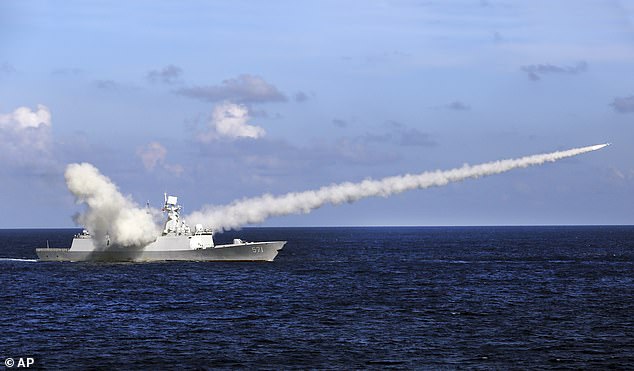 Chinese missile frigate Yuncheng launches an anti-ship missile during a military exercise in the waters near south China’s Hainan Island and Paracel Islands on July 8, 2016 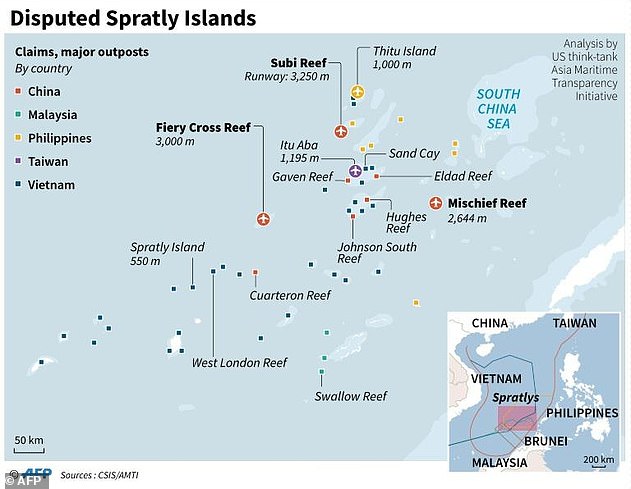 China claims nearly all the oil and resource-rich waters of the South China Sea and has ignored counter-claims from the Philippines, Vietnam, Taiwan, Brunei and Malaysia

The Chinese government has said that the military was carrying out drills between the Spratly and Paracel islands starting last weekend and ending on Wednesday, warning other shipping not to enter a designated area, according to South China Morning Post.

News of the China missile test was first reported by NBC News.

China’s claims in the South China Sea, through which about US$5 trillion in ship-borne trade passes each year are contested by Brunei, Malaysia, the Philippines, Taiwan and Vietnam.

The development comes as the US and China have reached a truce in their ongoing tariff war. US President Donald Trump and Chinese President Xi Jinping agreed over the weekend at the G20 summit in Japan to restart negotiations and not to implement new tariffs on goods.