Singapore: Beijing has cut off all diplomatic contact with the Australian government under the China-Australia Strategic Economic Dialogue.

The move, announced by China’s National Development and Reform Commission on Thursday morning, will make the task of repairing already strained diplomatic relations even more difficult as it will block contact between key government officials below the ministerial level. The decision is the first major Chinese government response to the Morrison government’s cancellation of Victoria’s Belt and Road agreement in April. 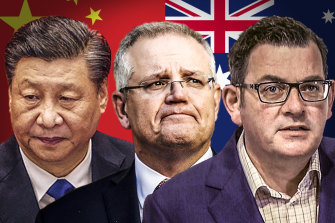 In a rare public proclamation published on the government website, the commission said Australian government officials had launched a series of measures to disrupt normal exchanges and cooperation between China and Australia “out of a Cold War mindset and ideological discrimination”.

“Based on the current attitude of the Australian Commonwealth Government toward China-Australia cooperation, the National Development and Reform Commission of the People’s Republic of China decides to indefinitely suspend all activities under the framework of the China-Australia Strategic Economic Dialogue,” it said in a statement.