MEXICO CITY, Mexico – From nondescript buildings in the industrial nucleus of Wuhan, across wavy seas to dusty tented super laboratories in the heart of Mexico, and then across the jagged southwest border and dispersing like a wild bomb ripping through every crevice of the United States, the growing presence of Chinese drug lords and cartels below the southern border is one that is killing an unprecedented amount of Americans.

According to multiple Mexico-based security and intelligence professionals, the bulk of the deadly work is carried out by the "Los Zheng" wing, identified as having "the largest presence in Mexico for the trafficking of fentanyl and methamphetamine."

As per intelligence findings by security firm Fortress Risk Management, obtained exclusively by Fox News, the Zhengs operate through seemingly legitimate shell companies that offer veterinary services, clothing sales, clinical laboratories and maintenance of computer systems in Mexico. They use the ports of Lázaro Cárdenas, Michoacán, Manzanillo Colima in Mexico and Ensenada Baja, Calif., for the commercialization of their products in the country. 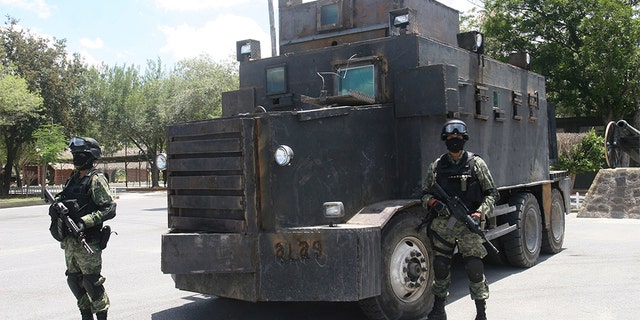 FILE PHOTO – Soldiers stand guard in front of a modified and armored truck as it is displayed to the media at a military base in Reynosa, in the Mexican state of Tamaulipas June 5, 2011. Soldiers seized a couple of modified and armored trucks at a warehouse in the municipality of Camargo during a patrol on Saturday, local media reported. According to the military, the vehicles were used by the CDG (Gulf Cartel) to transport drugs and hitmen.
(REUTERS/Stringer)

"They have the collaboration of customs authorities and members of the Sinaloa and Jalisco Nueva Generación cartels in Mexico," explained Lee Oughton, Fortress co-founder and COO. "Once in the country, the drug is transported by air and land to the United States through the states of Jalisco, Nayarit, Sinaloa, and Sonora."

This past June in Ohio, the U.S. Department of the Treasury's Office of Foreign Assets Control (OFAC) designated four Chinese individuals and one entity pursuant to the Foreign Narcotics Kingpin Designation Act (Kingpin Act) for "facilitating payments for the purchase of fentanyl analogs or other controlled substances, including synthetic cannabinoids or cathinones, for the Zheng Drug Trafficking Organization (DTO) – known for its endeavors in Colombia and Mexico – and directed by alleged Chinese synthetic opioid trafficker, Fujing Zheng.

Fujing Zheng, 37, who operated under the alias Gordon Jin and his father Guanghua Zheng, 64 – both of whom live in Shanghai – were indicted by the U.S. in 2018 "with conspiracy to manufacture and distribute controlled substances, conspiracy to import controlled substances into the United States, operating a continued criminal enterprise, money laundering, and other crimes."

Despite the recent arrests, the Zheng operation is said to only be proliferating on both sides of the snaking border.

Ed Calderon, a former Mexican law enforcement officer and narcotics subject matter expert, concurred that the Zheng-connected enterprises are ongoing – and that there are primary, secondary and backup facilitators to account for any arrests of personnel.

FROM BOMB-AFFIXED DRONES TO NARCO TANKS AND VENTILATED TUNNELS: HOW WELL-EQUIPPED ARE THE MEXICAN CARTELS?

And it is not just the Chinese drug lords and Mexican cartels that stand to boost their bottom lines.

"You can't bring anything into the country without paying off someone," Calderon asserted. "There are a lot of 'fixers' and guards assigned to these entry ports making a killing from China too."

Experts emphasize that it is a well-oiled machine in which each player has a distinct role and piece of the pie. Chinese-led money laundering procedures inside Mexico are said to be igniting faster growth and movement of the drug, which was initially developed for use as both an anesthetic and painkiller up to 100 times more potent than heroin.

Yet in cases such as Los Zheng, legitimate pharmaceutical and biotechnology companies are used as "fronts" or as a blurring between the legal and illegal missions.

And while Mexican cartels have, in recent times, upped the ante on their own production of fentanyl-related products, most still depend on Chinese counterparts for precursor chemicals and remain its biggest black market customers.

So with raw yet easy-to-cook and convert fentanyl costing around $2,000 per pound in China, its relative cheapness makes it highly profitable for cartels who then disperse the product on U.S. streets.

"For the past 12 years, Chinese criminal organizations have become the backbone to the drug cartels with chemicals supplied to the cartels and laundering tens of billions of the cartel profits in North America and Europe," said Richard Higgins, president of HTG, LLC, a strategic security and information warfare consulting who previously served on the National Security Council as the director for strategic planning. "Chinese-organized criminals south and north of the border are very sophisticated using WeChat and other forms of encrypted communication."

According to the Drug Enforcement Administration (DEA), Mexico and China "are the primary source countries for fentanyl and fentanyl-related substances trafficked directly into the United States." 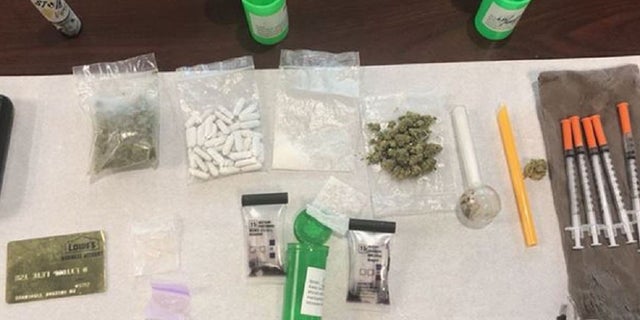 A police officer in Oklahoma was administered an opioid overdose drug last week after he was exposed to fentanyl following a drug bust.
(Bartlesville Police Department)

The DEA continues to pinpoint the Sinaloa and the New Generation Jalisco (Cártel de Jalisco Nueva Generación or CJNG) cartels as the primary culprits responsible for plundering fentanyl to the States from Mexico via "corridors in Mexico that connect to California and Arizona, indicating drugs passing through these associated areas would need to be approved by these organizations."

Moreover, Chinese nationals implicated in illicit webs are documented to cross through the southern border of Mexico at Frontera Corozal, in the state of Chiapas, into Tapachula, where there is a sizable ethnic Chinese community, and then journey by train to the Atlantic coast through territory controlled by Los Zetas. Others enter directly from Asia, passing through ports on the Mexican Pacific coast, including Puerto Vallarta in Jalisco, Manzanillo in Colima, and Coyacan in Mazatlan or arrive by air directly to Mexico City "where the activity of Chinese trafficking networks has been publicly reported by the Attorney General's Office."

But over the past two years, especially, there has been a steady drip of related seizures as a result of U.S. and Mexican authorities working on joint missions.

For one, the Mexican navy seized more than 25 tons of Chinese fentanyl en route to Culiacán, Sinaloa—the Sinaloa cartel's Mexico flagship – in August last year, and the Administration claims to have intercepted more than 1 million fentanyl pills in Phoenix and Arizona in 2019 alone. 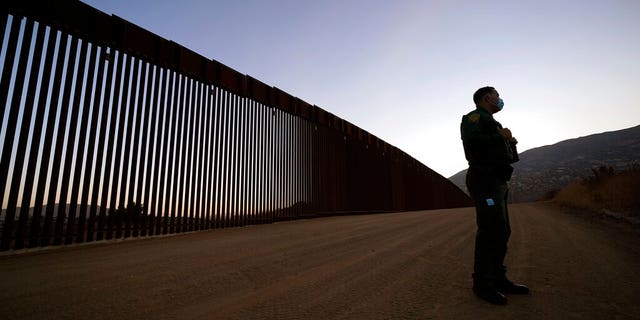 Aside from Zheng's apprehension five months ago, numerous other arrests inside the U.S. have also been made in recent years pertaining to Chinese involvement in the drug trafficking trade.

Last month, six Chinese nationals were slapped with various charges connected to a conspiracy that allegedly made more than $30 million over the past 12 years distributing drug money to Latin America from U.S. soil, and according to the Department of Justice (DOJ), entailed a complex operation of offering bribes to undercover informants, cryptocurrency exchanges, as well as purporting to create fraudulent identities and fake U.S. passports in the long-running scheme.

In June, Chinese national Xueyong Wu pleaded guilty for his role in laundering over $4 million in drug profits in conjunction with organizations in Latin America and Mexico, through to Virginia.

In March, Chinese national Xianbing Gan was convicted in Chicago of laundering narcotics money – totaling more than half a million dollars – from his homeland bank accounts and remitted to trafficking operatives in Mexico.

In 2007, Zhenli Ye Gon, a Chinese-Mexican businessman, was one of the first to fall under the iron fist "under suspicion of trafficking precursor chemicals into Mexico from Asia." While licensed by the Mexican government to import substances to feed his legal official Mexican pharmaceutical corporations, he was arrested by federal authorities in Maryland and charged with illicit dealings to siphon methamphetamine into the U.S., and hundreds of millions in cash was seized from his southern home. Gon has since maintained his innocence and was extradited to Mexico in 2016.

But since then, observers stress, such criminal activity between the two major bodies has only grown in depth and sophistication in the name of big cash rewards.

Calderon highlighted that smuggling and packaging techniques have also advanced in recent times, with cartels investing heavily in "pressing pill" technologies and moving from fentanyl-laced marijuana or heroin to regular pharmaceutical bottles and labels. These can be easily transported over-the-border and sold unbeknown to someone on the U.S. side seeking an oxycodone hookup.

Indeed, this has made the synthetic drug especially deadly – just a hint sprinkled into a counterfeit pill can be fatal, not to mention highly addictive.

The sudden onslaught of the coronavirus earlier this year provided an initial blow to the illegal drug industry, incapacitating the supply chain and flow of critical chemicals from the contagion's Wuhan epicenter to cartel counterparts in Mexico; intelligence gathers say it did not take long to adapt and tweak the business model and alter production mechanisms.

And with the unparalleled economic strain of the ongoing health pandemic, experts note that demand for drugs has only soared and worsened the opioid overdose crisis that President Trump deemed a "public health emergency" just over 3 years ago.

During the first three months of 2020, according to preliminary estimates released by the Centers for Disease Control and Prevention (CDC), drug overdoses deaths rose 10% compared to the same time period last year.

Furthermore, last year, as per data from the Centers for Disease Control (CDC), more than 72,000 Americans died of drug overdoses, of which "illicitly manufactured fentanyl, heroin, cocaine, or methamphetamine (alone or in combination) were involved in nearly 85% of drug overdose deaths in 24 states and the District of Columbia during January–June 2019."

Officially, U.S. authorities have maintained that the Chinese Communist Party (CCP) is not complicit nor absolved in the illegal industry emanating from its terrain – yet some are skeptical that there isn't an inch of trade that the leadership doesn't have some form of engagement or watchful eye over.

"As part of the CCP's unrestricted warfare model, they have progressed significantly against America with their enhanced role in the drug business. They can make multibillions and, at the same time, undermine the security of America," claimed Derek Maltz, a retired special agent in charge at the DEA. "A kilogram of fentanyl can kill 500,000 people, so the administration should look at the death rates and treat this as a serious national security threat as opposed to only a public health crisis." 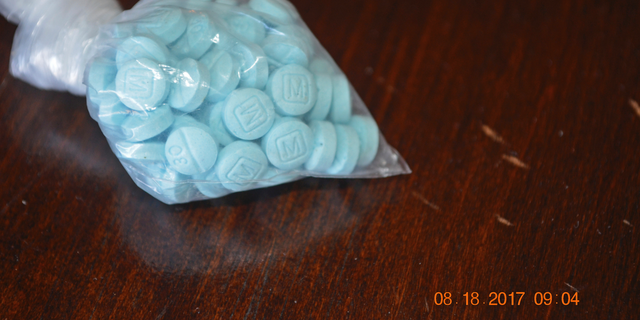 U.S. anti-narcotics authorities warn that the deadly drug deluge into America will only continue to modernize and multiply in the forthcoming months amid the protracted pandemic and rising demand, posturing as one of the biggest national security threats for the incoming administration to grapple with.

"Drugs are now the primary source of funding for most terrorist organizations throughout the world," Higgins added. "Go after the drug profits. Follow the money, not just drugs. Less money in cartel pockets means fewer chemicals and drugs, less violence and weapons, and less ability to corrupt the rule of law."