The King who says thank you to Britain every Christmas: This week, the tree will go up in Trafalgar Square – as it has each year since 1947. But few know it’s a gift on behalf of a Norwegian monarch who never forgot the sanctuary we gave him from the Nazis

From the moment it is felled, the giant Norwegian spruce — known as the Queen of the Forest — is revered and cosseted by foresters.

When the time comes for it to be transported to London, towards the end of November, schoolchildren in Norway gather to sing carols while the Mayor of Oslo holds one end of a saw and the Lord Mayor of Westminster the other.

The ceremony is only for the cameras, as the complicated job of cutting through the trunk, lifting the tree into the air on a crane and delicately lowering her into a carefully constructed cradle is done by experts.

For every year since 1947, a 20-metre tall tree has been donated to the British people as a thank-you from the Norwegians for British support during World War II.

This year’s, measuring 24 metres (78ft), will be put up on Thursday, as is traditional, in London’s Trafalgar Square.

Since 1947, the 20-metre tall tree in London’s Trafalgar Square (pictured in 2017) has been donated to UK as a thank-you from Norwegians for British support during World War II

Although well-known as a symbol of Christmas, not many people know the true story of heroism behind the annual gift, and the courageous role played all those years ago by the King of Norway.

For as wicked and misguided as the human race has so often been, occasionally there has arisen a person of bravery, integrity and decency, at a point in history when those qualities were under threat.

By his refusal to surrender those values to unspeakable evil, by his love of the country of which he ruled during exile in Britain, King Haakon VII of Norway was such a man — and made popular broadcasts to his country via the BBC through the war.

Aware that he was likely to be found and apprehended by the Nazis after the invasion of neutral Norway in April 1940, he slept in his uniform, fearful they would be able to publish humiliating photographs of him in pyjamas.

Then aged 67, tall, thin, moustachioed, he was a man in grief. Less than two years earlier, his English wife, Maud, the third daughter of Edward VII, had died of cancer.

The royal couple were very popular in Norway, liked for being a personal presence almost in the medieval tradition. Over the years it is estimated that the King gave tens of thousands of private audiences.

However, Maud was always homesick for England and stayed in their house on the Sandringham estate in Norfolk, a wedding present from her father, as often as she could.

There, she could indulge her twin passions, riding and — by taking trains from King’s Lynn to London —clothes shopping.

Her diminutive, beautifully clad figure, teetering down Bond Street, usually accompanied by one of her dogs, was a familiar sight in the mid to late-1930s.

During a UK visit in November 1938, Maud died. The King was desolate. He and their much-loved only son Crown Prince Olav, then 35, accompanied her body back to Oslo on HMS Royal Oak, lashed by storms.

After the German invasion of Norway on the night of 8-9 April, 1940, the country’s chief weapon against the Nazis was surprise.

For more than 150 years, Norway had been at peace. None of her army officers had ever known combat and Hitler was convinced King Haakon would agree to his demands that he should dismiss his ministers and appoint a government led by the contemptible Vidkun Quisling, leader of the Norwegian Nazi Party. 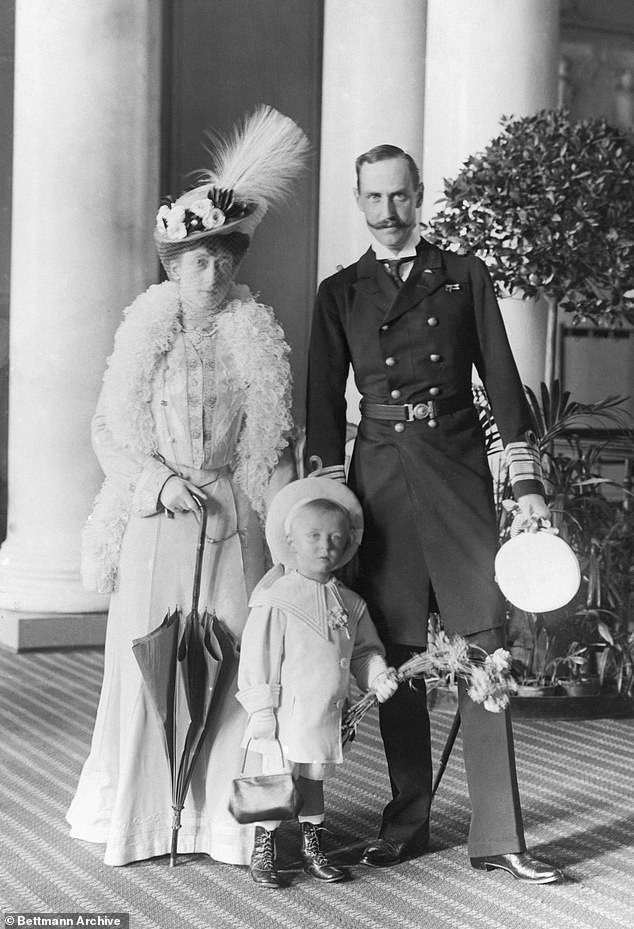 Not many people know the story of heroism behind the gift, and the courageous role played all those years ago by King Haakon VII of Norway (pictured with Queen Maud and Prince Olav)

Denmark surrendered just six hours after Hitler’s troops crossed its border. To do otherwise would be to risk further bloodshed and almost certain defeat. But Haakon and his government were determined Norway would not collaborate with the Nazis.

Not for one moment did they depart from the principle they held dear: namely free, democratic government, legality which followed the will of the people.

The Norwegians had the measure of the gangster state they faced even at this early stage.

As German warships neared Oslo, the national gold reserve, 53 tons of ingots worth about £2billion, was smuggled from the Bank of Norway to a hiding place on the shores of a fjord, with just hours to spare.

The Germans arrived to find the vaults empty and the King gone. He had escaped to a hotel in a village 135 miles north-east of the capital. With him were his son, the government and members of their parliament.

On hearing that they had rejected the German ultimatum to surrender, Hitler ordered that the King should be taken dead or alive.

Soon, low-flying planes were roaring over the tiny village. At one point, father and son threw themselves face down in the snow beside the road as the air attacks took place.

Explosives and incendiary bombs were falling all about them, but King Haakon remained calm as he picked up a machine-gun bullet which had fallen between him and Prince Olav.

‘A greeting to me personally from Germany,’ he remarked quietly.

For the next two months, the King and his party moved from place to place to evade the Germans.

By April 21, he was sheltering on a farm, where, during a Cabinet meeting held in his bedroom, the windows rattled with exploding bombs.

The King was next to a window and someone suggested changing places. ‘We sit where we are,’ Haakon replied.

In the coastal town of Molde, they had to retreat to the woods, for six days in freezing conditions.

From there, they boarded HMS Glasgow which lay low in the water due to its secret cargo of a large part of the national gold reserve on its way to the Bank of England.

But the King was not ready to leave Norway yet.

While the warship headed for Britain, a small fishing vessel took him to the Arctic port of Tromso.

His arrival there was supposed to be top secret, but German intelligence had discovered his whereabouts, and planes were soon pursuing him.

So, for the next month the royal party hid in the snow-covered mountains — the King and Prince Olav sleeping in one small chalet and using another as an office and audience chamber.

On June 7, shortly before the Germans finally overran the country, the King travelled back to Tromso to preside over a Cabinet meeting for what could have been the last time on Norwegian soil, his voice breaking as he said ‘God bless Norway’ to his ministers.

That afternoon, he, Olav, and a few members of the Government boarded destroyer HMS Devonshire, and set sail for the Scottish port of Gourock.

From here they travelled by train to London’s Euston, where they were met by King George VI and driven to Buckingham Palace.

The London exile had begun.

When the citizens of Oslo heard their King had left the country, they felt abandoned. Only in the unfolding months was it clear the King was not fleeing out of cowardice.

He was taking with him, as the most precious of cargoes, their idea of themselves as a nation.

His broadcasts from Britain reminded them to keep their values and his moral fortitude cheered them, just as he was cheered by the defiance of the greater part of the Norwegian people.

Rather than saying ‘when we win the war’, he spoke of the day he would ‘come home’. Loyalty to their constitutional monarch provided the focus for Norwegian resistance.

One of the jobs assigned to the thuggish henchmen of Quisling’s pro-German administration was to rip flowers out of the button-holes or hats of those who wore them on the King’s birthday.

For his part, the King of Sweden told Haakon to give up.

But with unbridgeable stubbornness, he held to his declaration that the government of Norway continued in England. 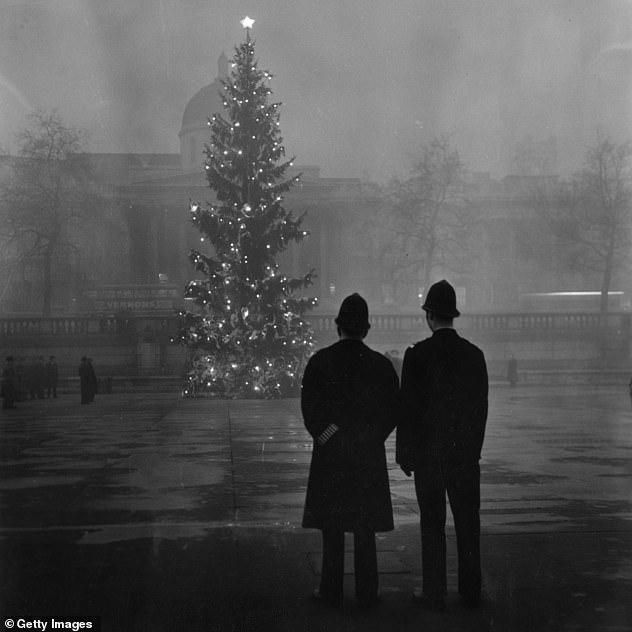 King Haakon passed the tree on to Londoners and it was first erected in Trafalgar Square in the middle of the war (pictured in 1948) with no electric lights, but evergreen with defiant hope

Alongside regular meetings with his ministers, the King presided over councils of state held in the Norwegian embassy, a beautiful building in Kensington.

He also remained in close contact with all serving forces, land, sea and air, who had left Norway, often lunching at the United Service Club.

Meanwhile, nearly 1,000 merchant vessels and 30,000 Norwegian merchant seamen were at the disposal of the Allies and played a vital role in keeping Britain fed.

Their work was praised by Philip Noel-Baker, parliamentary-secretary in the Ministry of Transport: ‘If Norway had done as stronger nations did, and said: ‘What’s the use?’

‘I can imagine that we would not have been able to hold out when things were at their worst. Great Britain will never forget what Norway has done.’

Norwegian forces clearly could not regain their country by conquest of the mighty Wehrmacht, but in exile they could plan to make life difficult for the German invaders, sometimes with the help of British intelligence.

But for one such operation in February 1943, history would have been horrifically different.

A raiding party of nine Norwegians were dropped into their homeland, carrying high explosive charges. With these, they blew up an industrial facility in the mountains of Southern Norway.

It was the only place in the world producing ‘heavy water’, which the Nazis planned to use in developing a German atom bomb.

Another success which shone a light in the darkness was a seemingly small event the year before.

Urangsvag cut down a Norwegian pine in an arboretum, intending it as a gift to exiled King Haakon. It was taken by tanker and transported to the King’s temporary home at Foliejon Park, his home in exile at Windsor.

Among its admirers was George VI, who wished his ‘dear Auntie Maud could have lived to see this beautiful tree, which seems, in a strange way, a symbol of all our hopes in these dark days’.

As a result, King Haakon decided to pass the tree on to Londoners.

So it was first erected in Trafalgar Square in the middle of the war. No electric lights — there was still a blackout! — but evergreen with defiant hope.

The year after, the King returned to Norway, the people of Oslo remembered the gift, and so began the tradition, kept thereafter.

These days, the lights are energy-efficient LED bulbs. But they will still be beacons of an imperishable light, reminding us how much difference can be made to history by just one individual possessing the rare gift of moral courage.