Closing in on victory: Remarkable photos of the last days of WW2 show Allied tanks entering Germany, soldiers treating an injured Italian boy and troops posing in the ruins of the Reichstag

They were taken by Sergeant Charles Hewitt, of the Army Film and Photographic Unit.

He was present at many of the important offensives of 1944 and 1945 including the Battle of Monte Cassino during the Italian Campaign and the Allies advance into Germany following the D-Day invasion. 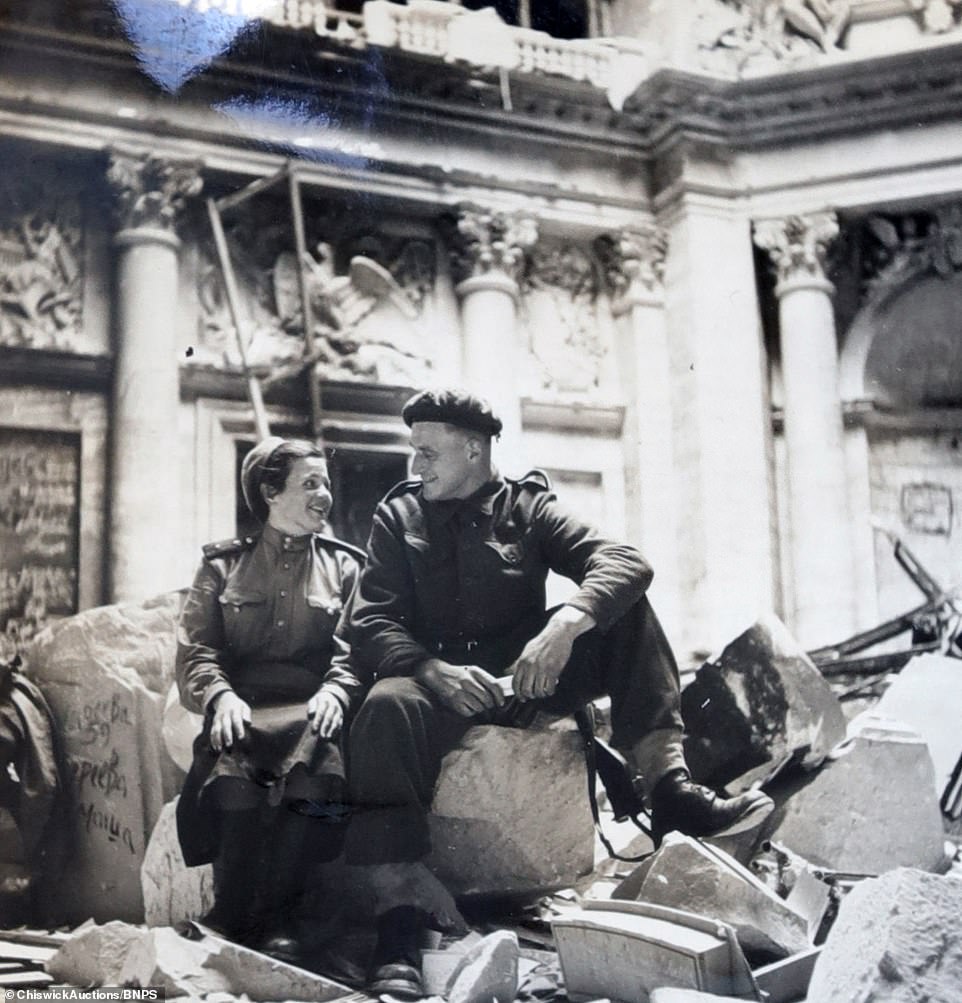 Allies inside the Reichstag – constructed in Berlin to house the Imperial Diet of the German Empire – after heavy bombardment. These images were taken by Sergeant Charles Hewitt, of the Army Film and Photographic Unit, who later went on to work for the Picture Post and the BBC 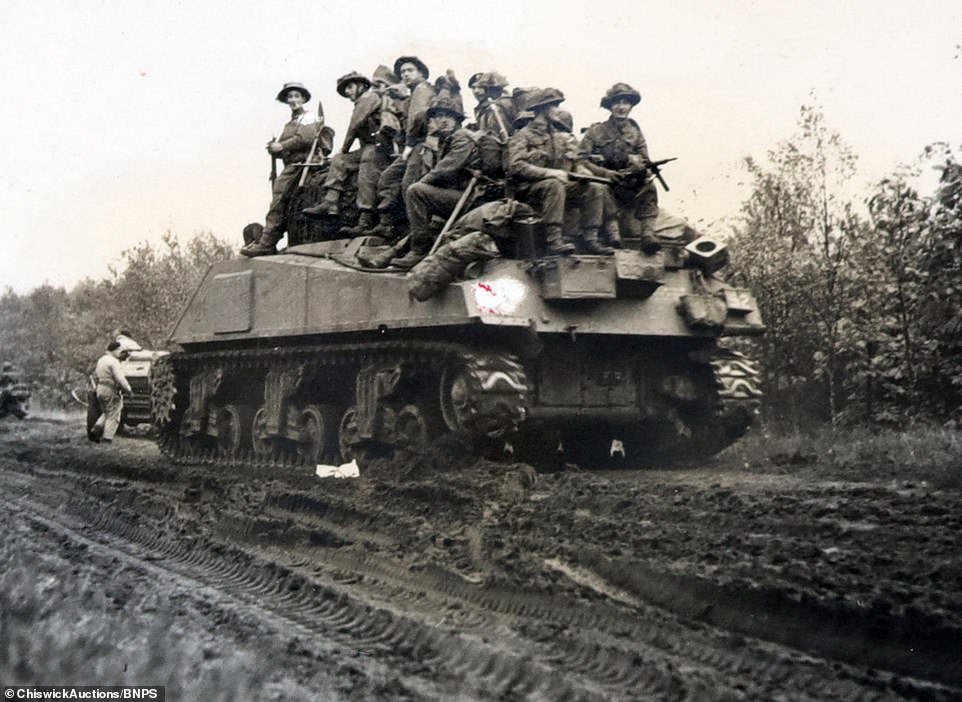 Sergeant Charles Hewitt, of the Army Film and Photographic Unit, captured this image of Allies entering Germany on a tank following the D-Day invasion. Hewitt was present at many of the important offensives of 1944 and 45 including the Battle of Monte Cassino during the Italian Campaign

While many of his photos appeared in the international press at the time, this selection from two personal, unpublished photo albums he kept of the conflict have only now emerged.

There are dramatic images showing the Allied soldiers in the heat of battle at Monte Cassino, and a moving snap of a soldier tending to a wounded Italian boy caught in the crossfire.

Other striking snaps are of surrendering German soldiers, but there are also charming images of troops relaxing away from the front line. 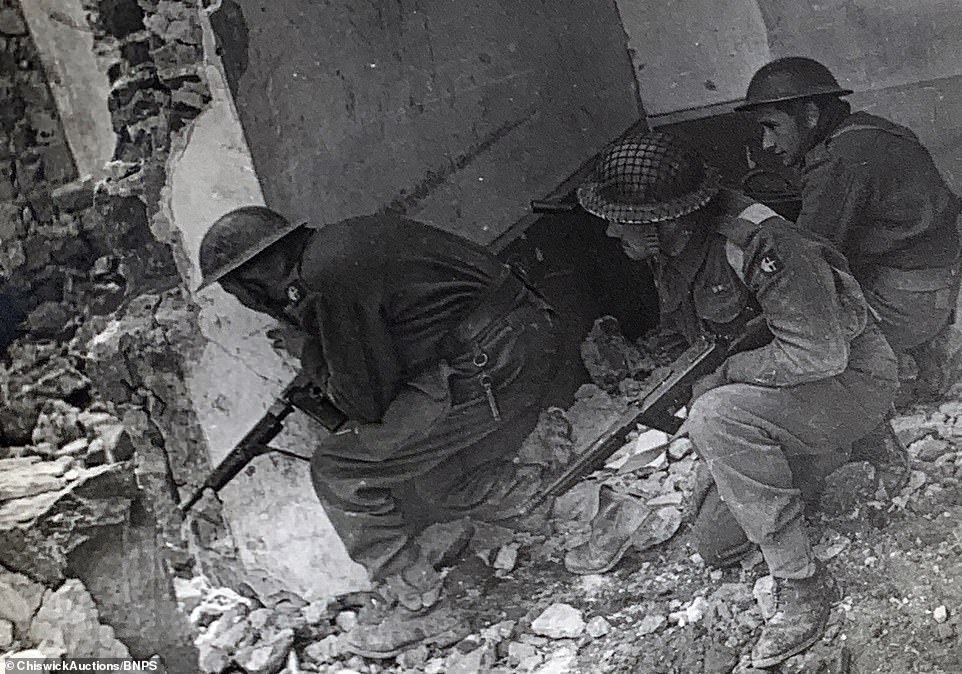 Tommies taking cover during the Italian campaign at Monte Cassino. Tommy Atkins (often just Tommy) is slang for a common soldier in the British Army. German soldiers would call out to ‘Tommy’ across no man’s land if they wished to speak to a British soldier. French and Commonwealth troops would also call British soldiers ‘Tommies’ 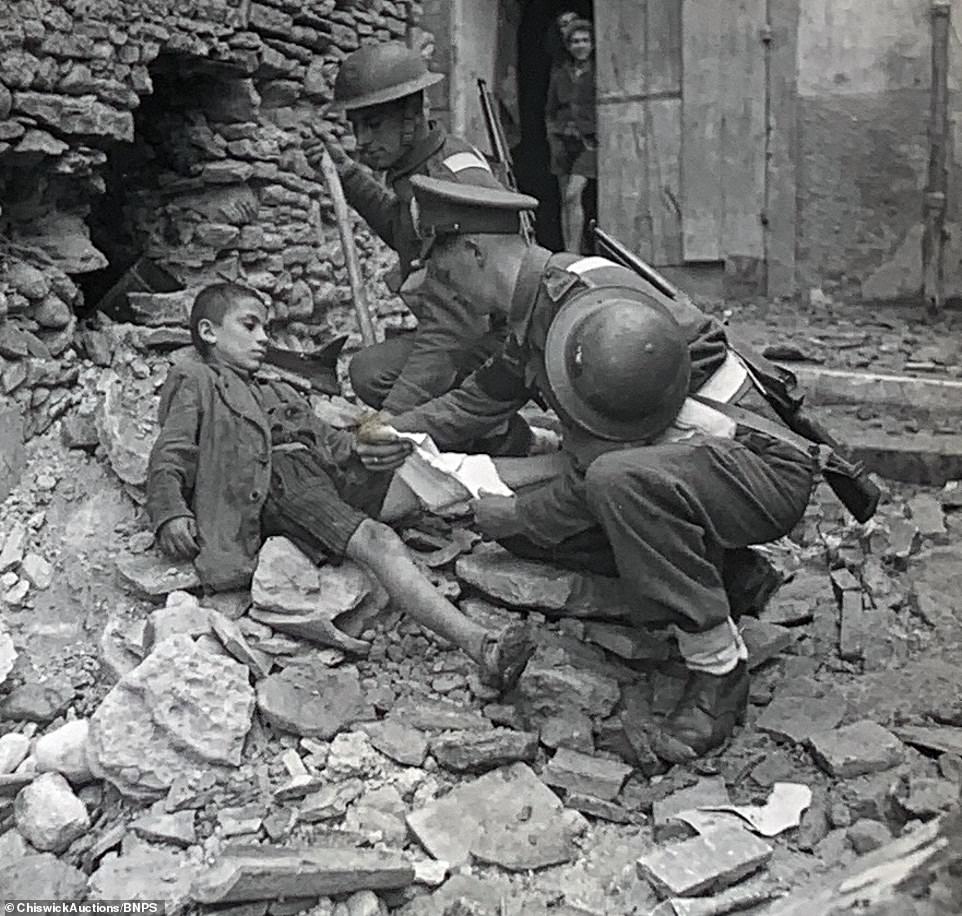 Allies helping an Italian child following a shell raid on Monte Cassino. The Battle of Monte Cassino was a costly series of four assaults by the Allies against the Winter Line in Italy held by Axis forces during the Italian Campaign of World War II

Allied soldiers made themselves at home at the Olympic Stadium complex in Berlin, with one taking a leap off the 10m diving board into the pool.

Others posed in the rubble of the Reichstag, with one snap captioned ‘Hitler’s dining room’.

Sir Winston Churchill is shown arriving in Berlin in July 1945, and the seminal moment is captured when a British flag is unfurled to signify victory. 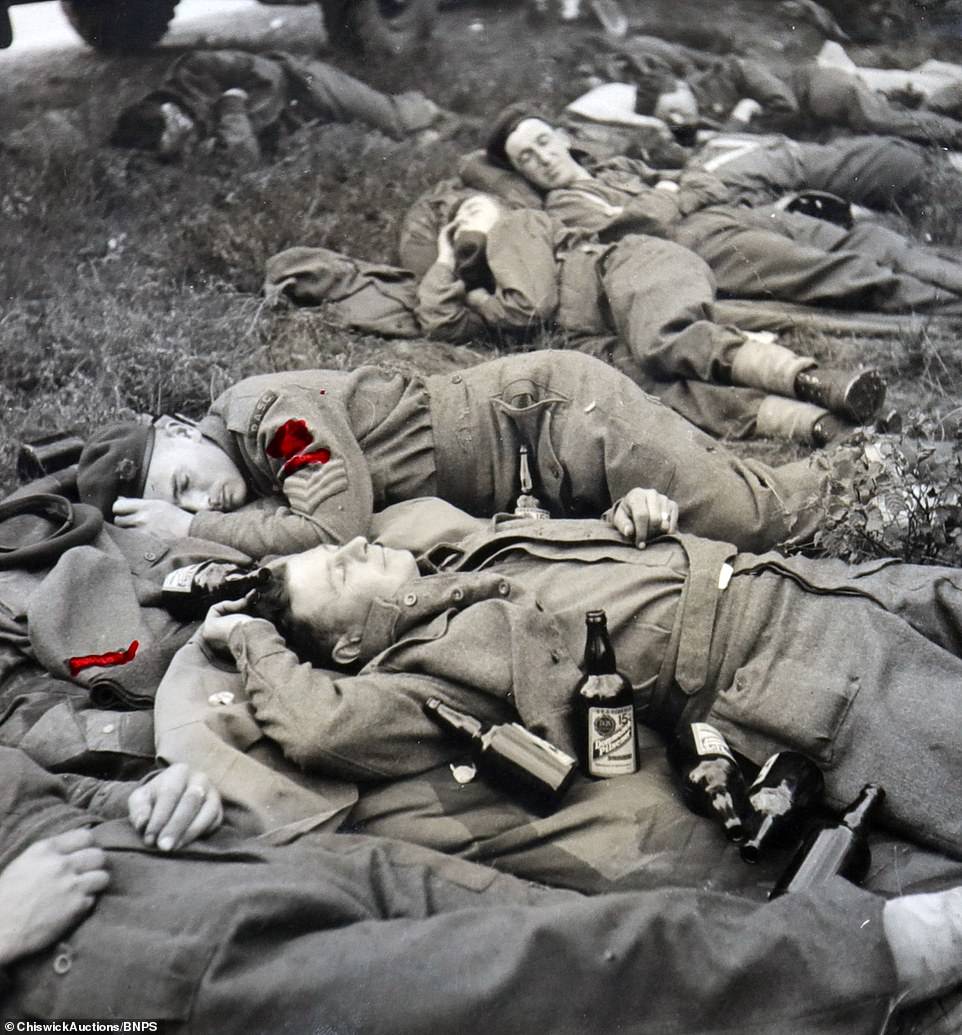 Troops relaxing at Arnhem. The Battle of Arnhem, 17 Sep 1944 – 25 Sep 1944, was a major battle of the Second World War at the vanguard of the Allied Operation Market Garden – which itself was a failed operation that aimed to create a 103 km salient into German territory with a foothold over the River Rhine, creating an Allied invasion route into northern Germany 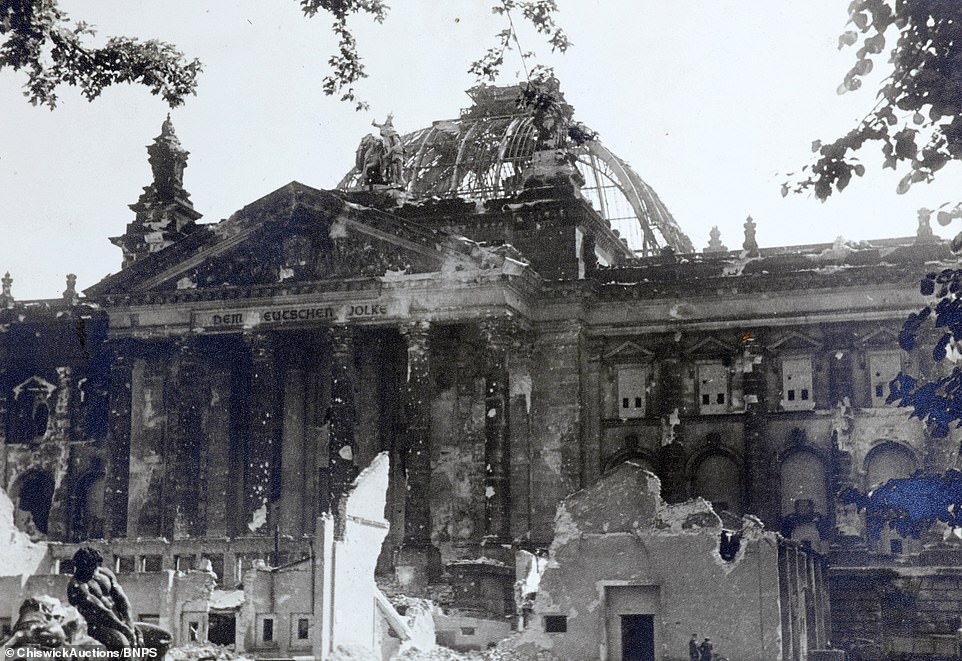 The Reichstag after heavy bombardment. While many of his photos appeared in the international press at the time, this selection from two personal, unpublished photo albums he kept of the conflict have only now emerged

Sgt Hewitt, who was known as ‘Slim Hewitt’ due to his tall and slender frame, also photographed a traditional German family in their home.

And he took pictures at the Red Cross school for young children and Russian mothers at Belsen, the site of the notorious concentration camp.

After the war, Sgt Hewitt worked for the Picture Post until it folded in 1957 then joined the BBC, contributing to their ‘Tonight’ programme. 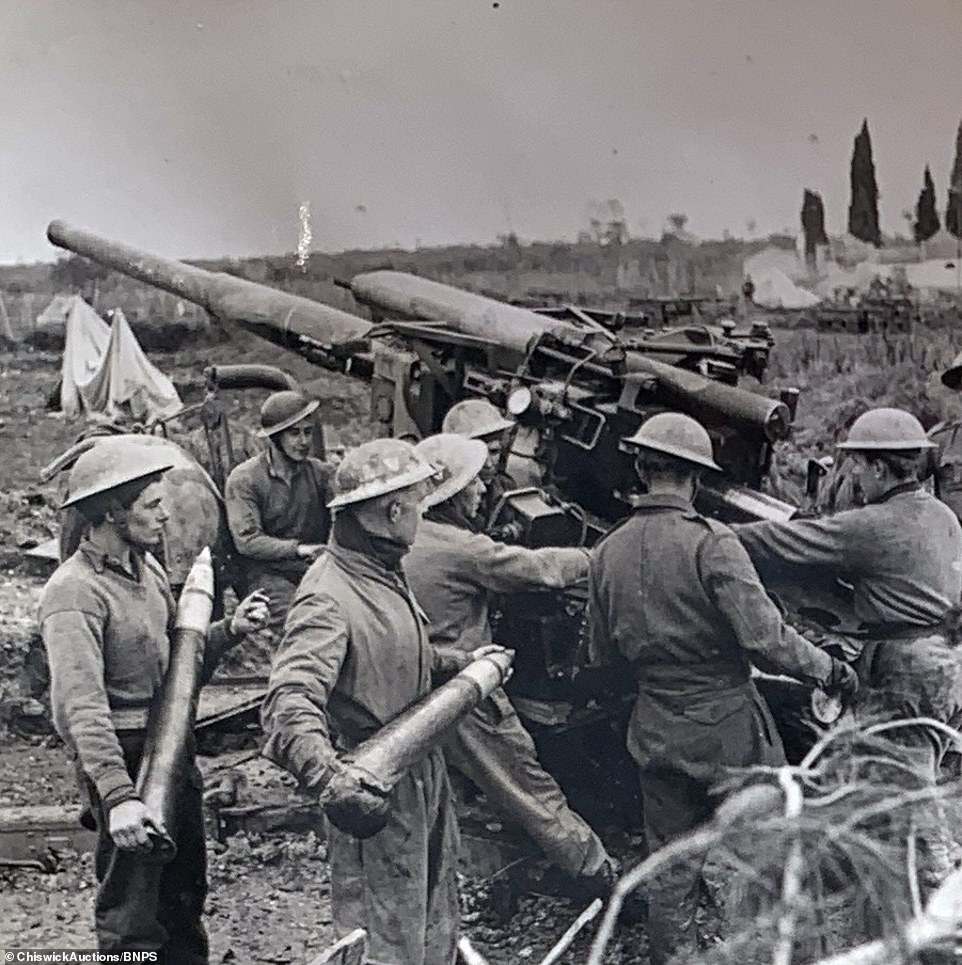 Allies loading shells during the attack on Monte Cassino. Monte Cassino is a hill in Italy, about 130 kilometres southeast of Rome. The allies, by bombing the hill, were attempting to make their way to the Italian capital. On 15 February 1944 the abbey was almost completely destroyed in a series of heavy American-led air raids. The Commander-in-Chief Allied Armies in Italy, General Sir Harold Alexander of the British army ordered the bombing 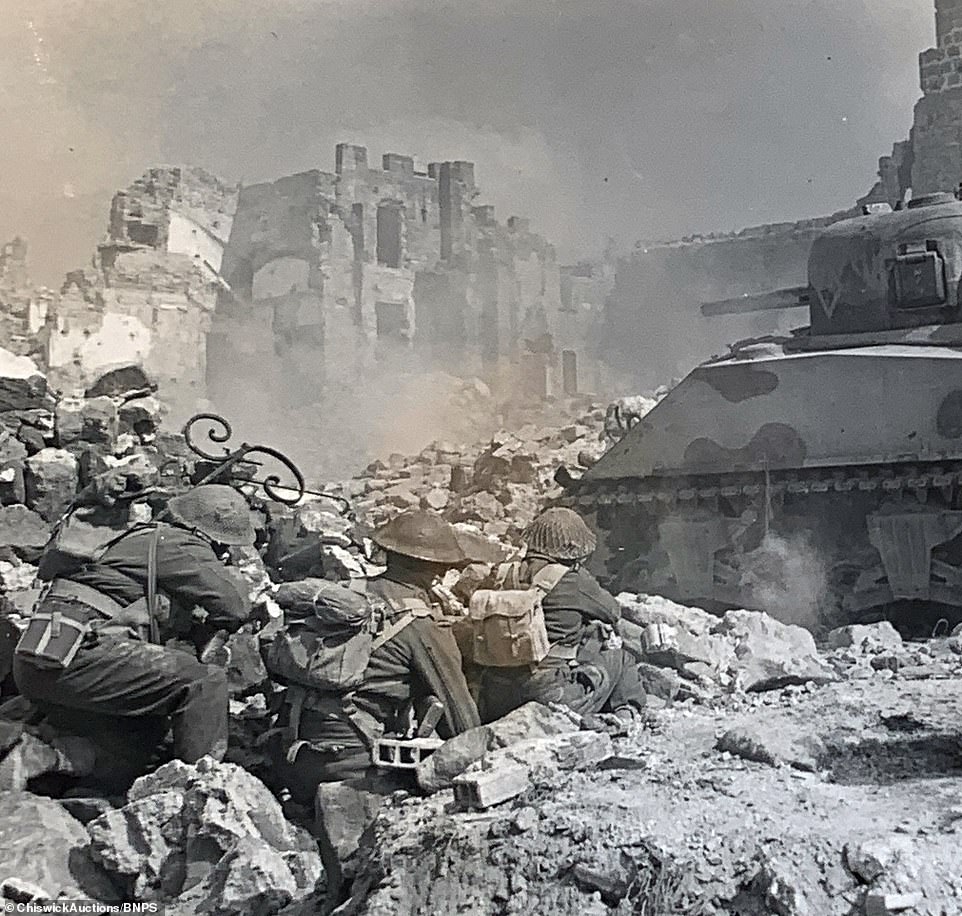 Allies launching the assault at Monte Cassino. Considered a key observational post by both sides, the Allies made the insurgency into the abbey on the hill believing German troops were using it. The abbey was not initially utilised by the German troops as part of their fortifications, owing to General Kesselring’s regard for the historical monument. It turned out that the Allied attack killed 230 Italian civilians seeking refuge at the abbey

Now, she has consigned them for sale with Chiswick Auctions, of London, who expect them to fetch £1,200.

Austin Farahar, specialist at Chiswick Auctions, said: ‘These important albums contain a fascinating insight into the closing stages of the war from a highly skilled professional photographer on the front lines with the Army film and photographic unit. 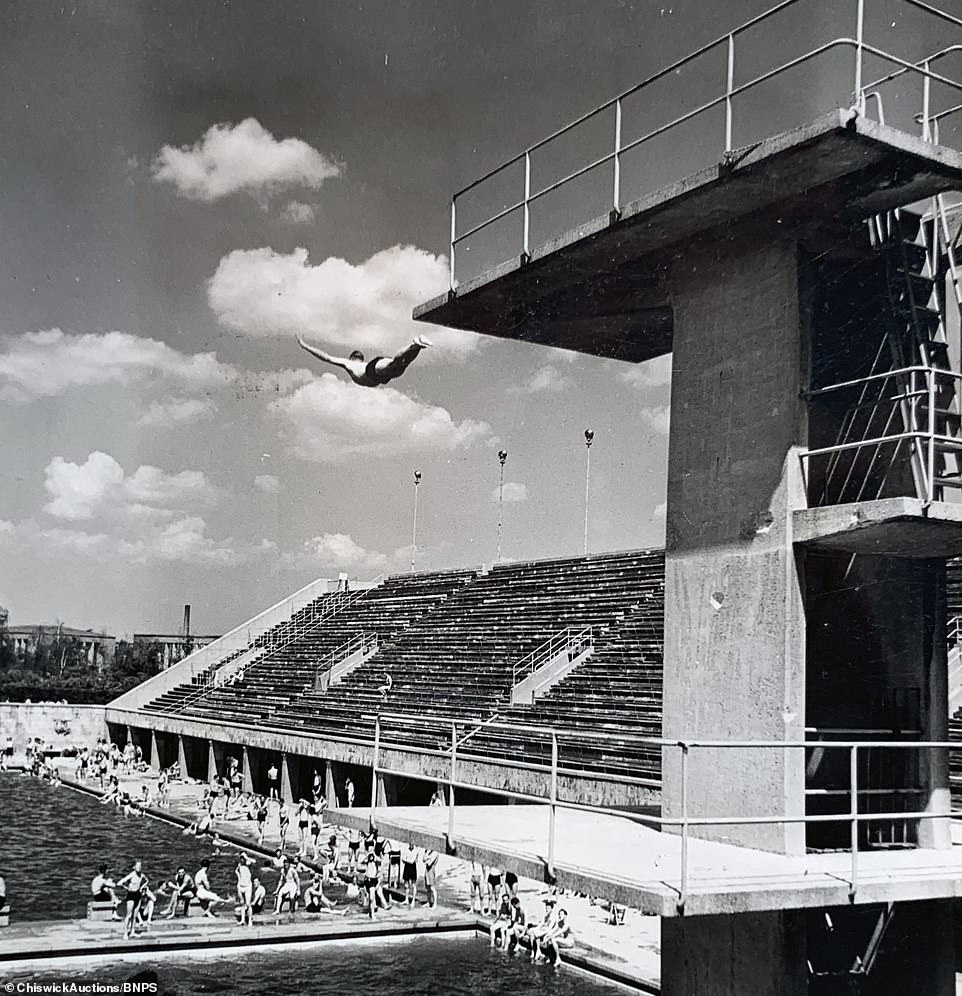 Allies dive from the board at the swimming stadium at the Berlin Olympic stadium complex. The most significant battle around the Olympiastadion was in April 1945 when the Soviet army fought to capture it. This was during the final battle of the Second World War in Europe 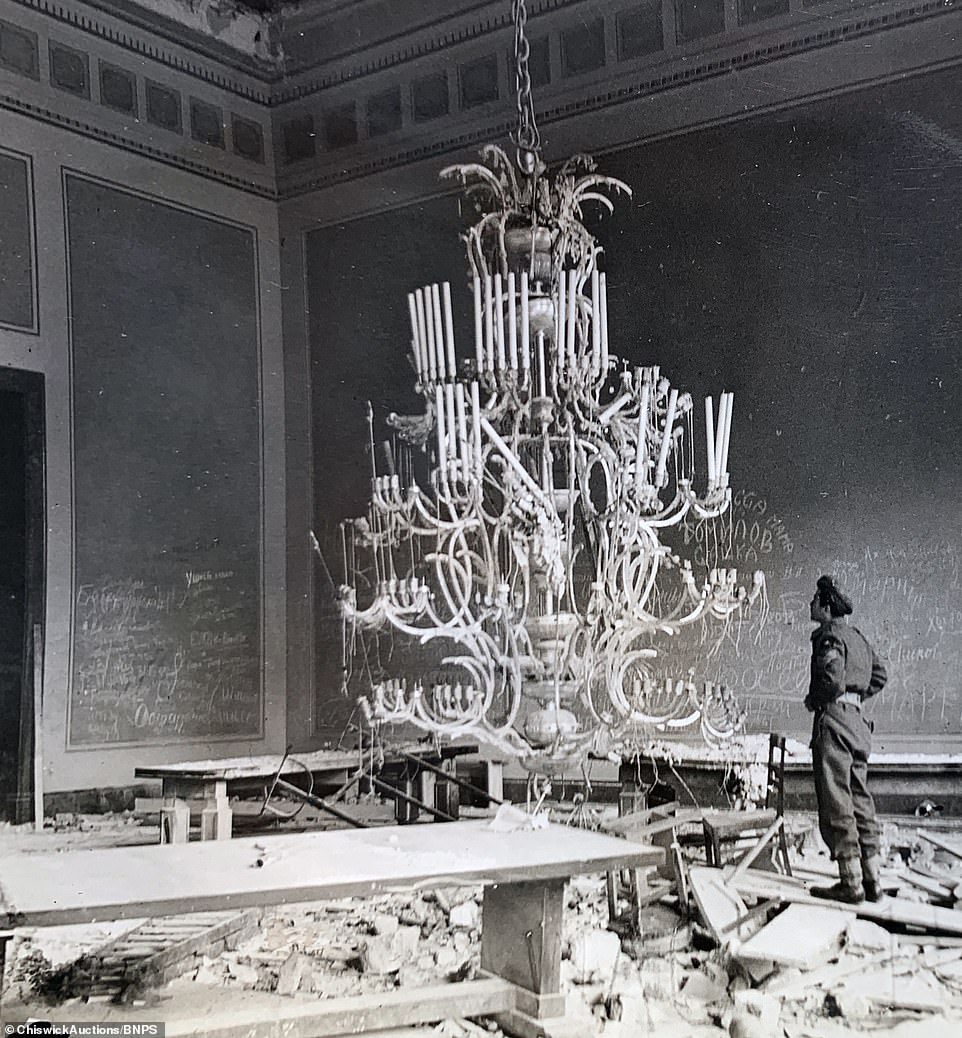 The remains of Hitler’s dining room inside the Reichstag, Berlin, May 1945. The Reichstag was torched when the Nazis seized power in 1933 and shelled by the Soviet troops who stormed the capital of the Third Reich in 1945. The image of the hoisting of the Red Flag over the Reichstag 2 May 1945 has come to represent the ‘total victory’ of Soviet Russia over Nazi Germany 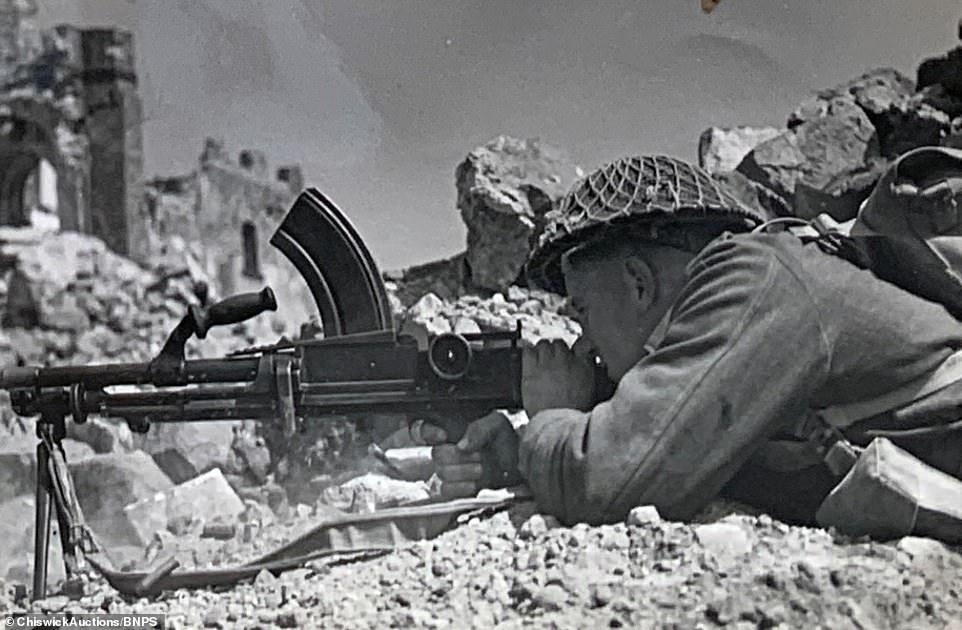 An allied gunner during the attack on Monte Cassino. The Abbey was rebuilt after the war and In the early 1950s, President of the Italian Republic Luigi Einaudi gave considerable support to the rebuilding. Pope Paul VI consecrated the rebuilt Basilica on October 24, 1964 but during the Italian campaign, it was a shadow of its former, and current, self – being reduced to rubble

‘Much of his work was published internationally at the time but this sale features two of his personal and unpublished photograph albums from this stage of his career.

‘Many men in this unit went on to have highly successful and decorated careers in film and photography.

‘At this time, these men and women were responsible for nearly all of the imagery and propaganda films that the public had access to. 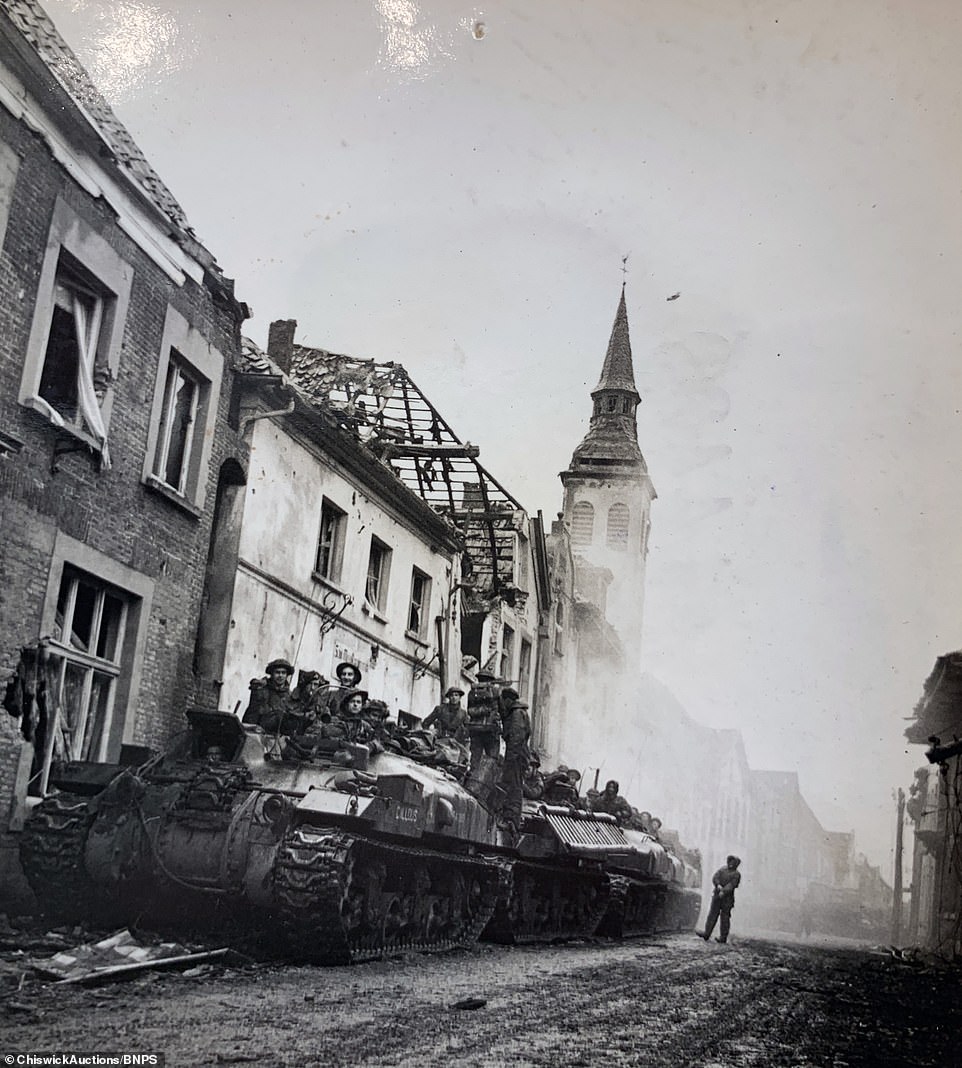 Allied troops liberating a town in tanks. The photographer died aged 72 in 1987, with the collection of 370 photos being passed to his daughter. Now, she has consigned them for sale with Chiswick Auctions, of London, who expect them to fetch £1,200 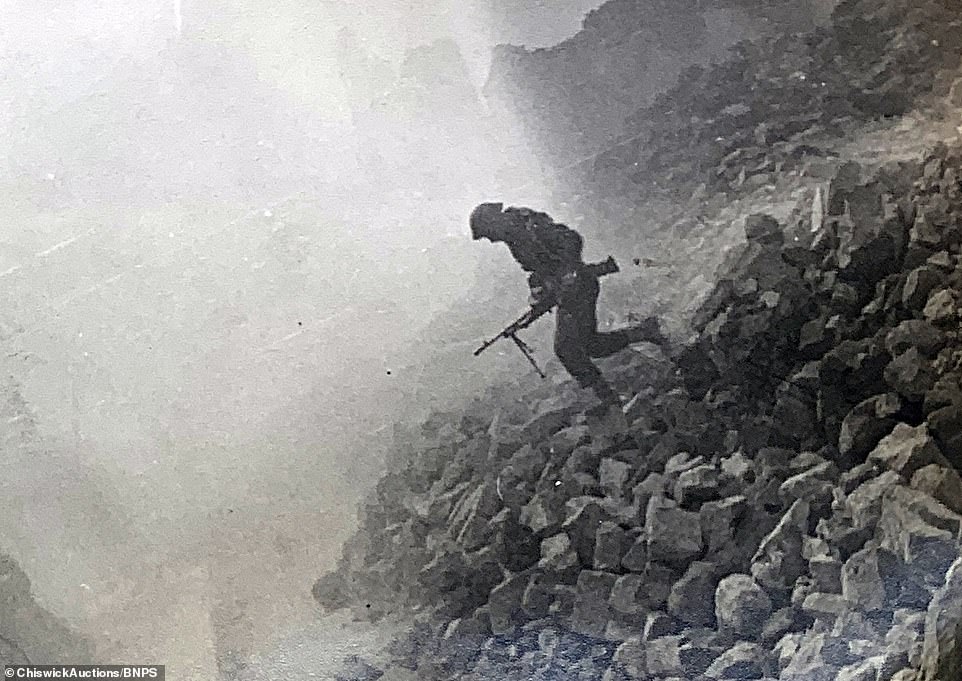 Allies in the heat and dust during the attack on Monte Cassino. The loss of life during the ill-advised campaign on the abbey was huge, with the Allies lost 55,000 soldiers and an estimated 20,000 German soldiers were killed and wounded 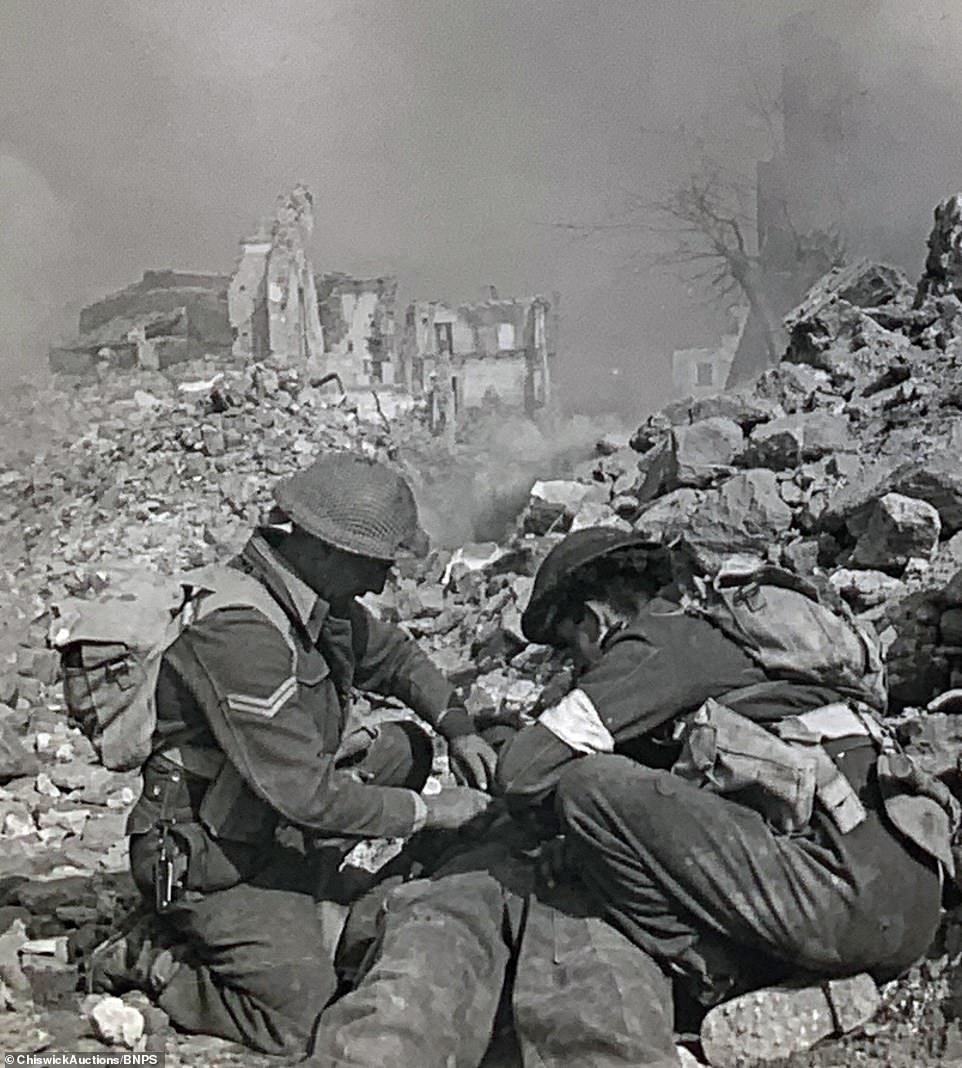 Allies tend to a wounded comrade at Monte Cassino. Whilst the loss of life was huge as a result of this battle, efforts were made to save precious artifacts inside the structure. According to the abbey’s website, prior to the start of the Battle, German officer Captain Maximilian Becker and Austrian officer Lieutenant Colonel Julius Schlegel had arranged for the majority of the abbey’s artifacts, library archives and documents, and numerous other treasures to be moved for safe-keeping at the Vatican City in Rome. This massive task took months to finish, along with hundreds of men and monks to accompany everything

‘The technical proficiency with both exposure and framing exhibited in all of these images sets them apart from more ordinary albums from this period.

‘The proximity to the front line where Hewitt was operating make them incredibly insightful.

‘Much of Hewitt’s story telling abilities through still images that is apparent in his later works for Picture Post and for the BBC can clearly be seen in their earliest incarnations across this pair of albums.’

The sale takes place on Thursday. 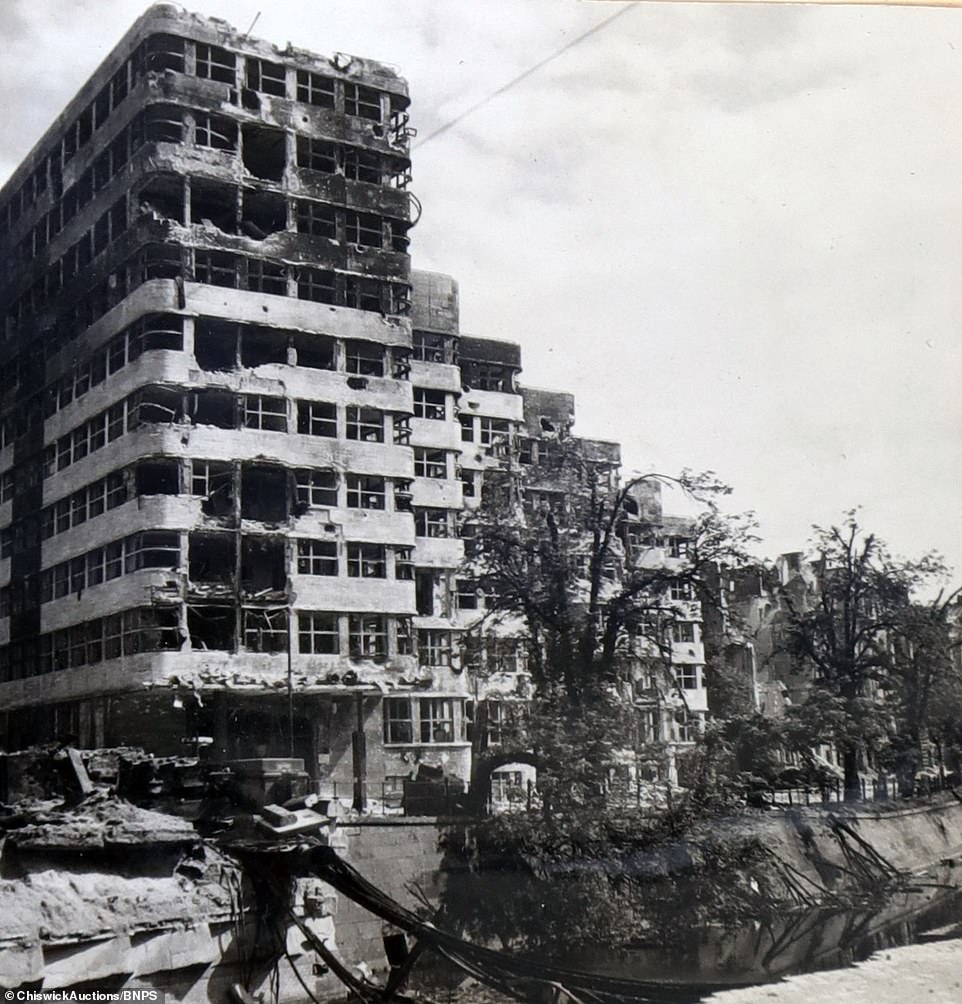 Berlin is pictured after Allied bombing. The city was decimated by air raids as German forces dropped their own bombs on the UK, specifically London, Liverpool and Birmingham. Estimates place causalities at 400,000 as a result of bombing on Berlin. Among the devastating bombs dropped was the RAF’s ‘Grand Slam’ – a 22,000 lbs monster bomb that left a crater some 70 feet deep and 130 feet around during a top-secret test in March 1945 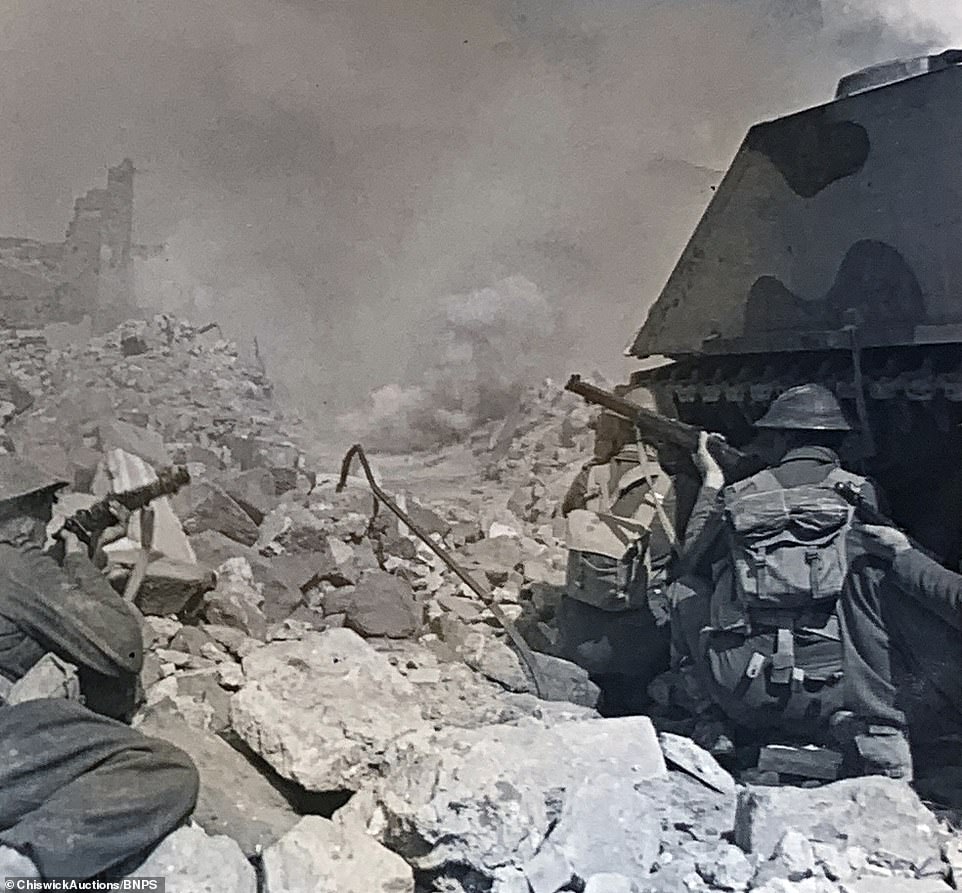 Allies launching the assault at Monte Cassino. On Oct. 13, 1943, one month after Italy surrendered to Allied forces, it declared war on Nazi Germany, its onetime Axis powers partner. Mussolini brought Italy to war but belief in him diminished upon arrival of the Allies. The dictator was ousted on July 25 and his replacement, Gen. Pietro Badoglio, sought peace with the Allies, and reached an armistice on Sept. 3 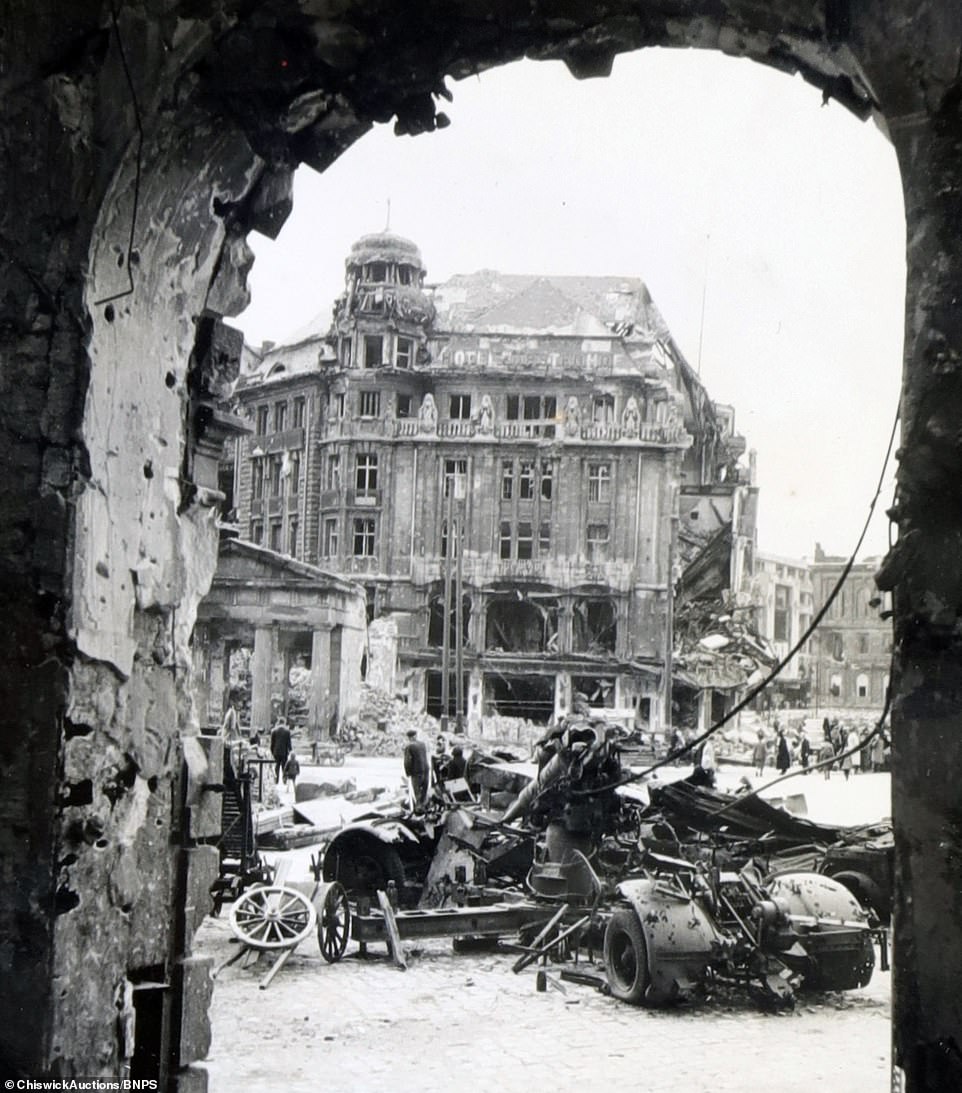 Berlin in ruins following the bombardment from the allies. World War II fatality statistics vary, with estimates of total deaths ranging from 70 million to 85 million. Italy had around 457,000 civilian and military deaths with the Soviet Union having 24,000,000 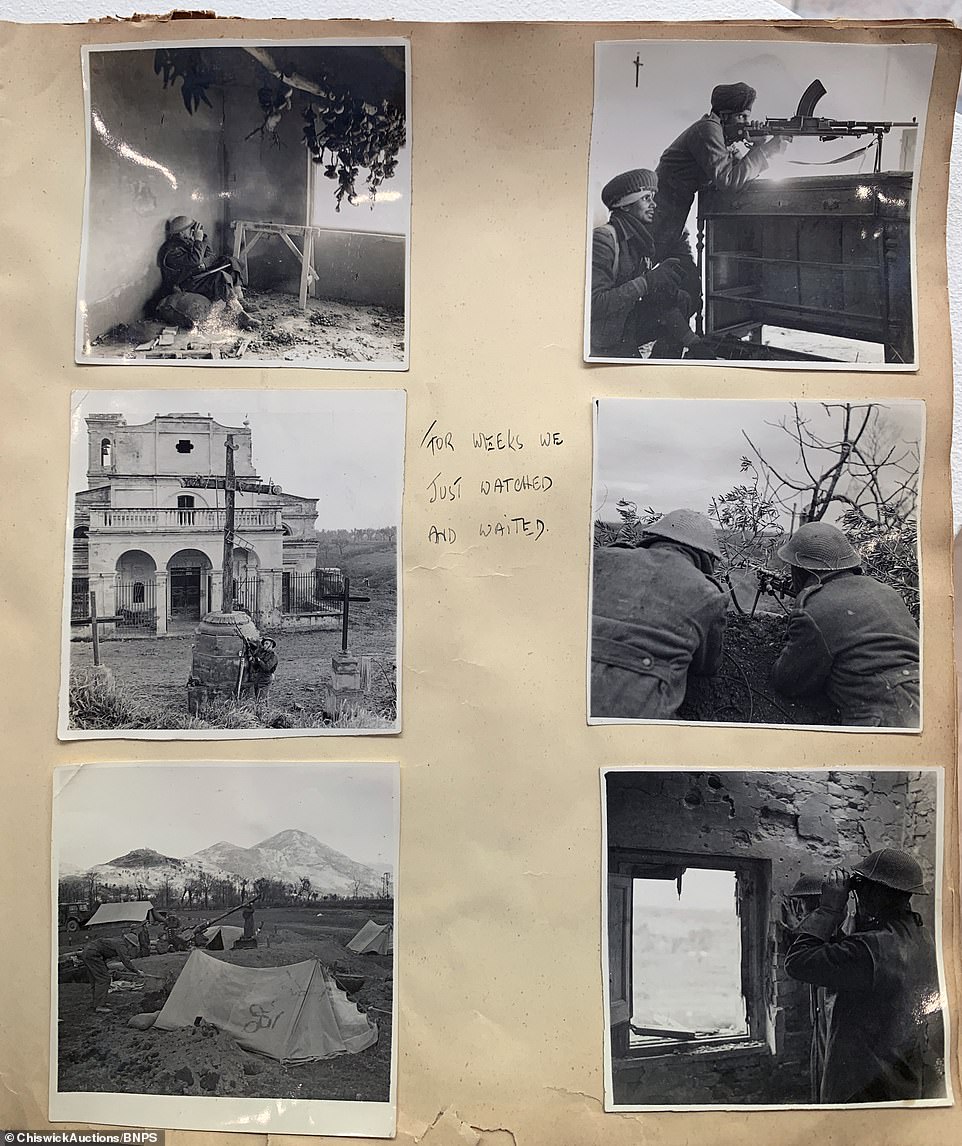 ‘For weeks we just waited and waited’ is the text accompanying pictures in a scrap book from Hewitt. It shows Allies waiting to launch the attack on Monte Cassino