Republicans’ ability to control the Senate is in the balance by just 140 votes as of Thursday afternoon as Georgia Senator David Perdue fell below the 50 per cent of the vote he needs to avoid a runoff election.

The incumbent Republican is now just around 140 votes shy of avoiding a runoff as he holds 49.9997 per cent of the vote with 98 per cent of precincts reporting – just short of the threshold needed to outright win.

While two per cent of the vote still needs to be counted in the Peach State, they are largely coming in from Democratic areas, meaning it’s likely his lead could drop even further below the 50 per cent line.

Fellow Georgia Republican Sen. Kelly Loefller’s runoff against Democrat Raphael Warnock will be held in January after they earned 26.1 per cent and 32.7 per cent respectively.

The Senate election count stands at a tie 48-48, as the two independent members, Senators Bernie Sanders of Vermont and Angus King of Maine, caucus with Democrats.

If Republicans were to hold onto control of the Senate and Democratic nominee Joe Biden were to emerge as the victor in the presidential race, he would essentially find himself in a gridlock unable to do much he has promised he would if he won the White House.

Hurdles Biden would have to face if he were at odds with the Senate during his presidency would include an inability to stack the Supreme Court, like Democrats have threatened to do after Republicans were able to force through Amy Coney Barrett’s nomination just days before Election Day.

He would also have problems getting through key legislation as well as cabinet appointments. 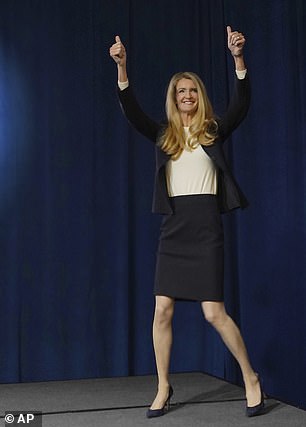 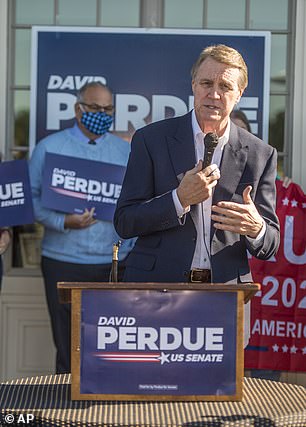 The makeup of the Senate come January could entirely depend on the two races in Georgia, where Republican Sen. Kelly Loeffler (left) is already headed for a runoff election in January. Fellow Republican Sen. Dvid Perdue (right) fell below Thursday afternoon the 50 per cent margin needed to avoid a runoff 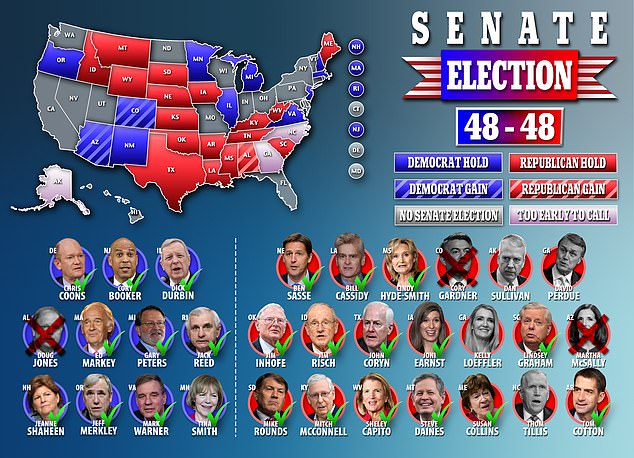 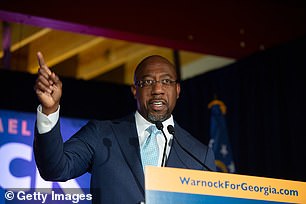 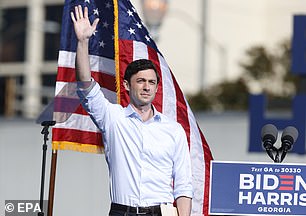 The latest Senate race called was on Wednesday night for Senator Gary Peters.

The victorious reelection bid brought the race even closer as it remains up in the air which party will control the Senate in either Trump’s second term or Biden’s first.

The Democrat incumbent was able to hold on to his seat narrowly against Republican challenger John James in one of the most competitive and closely watched Senate elections in the nation, earning 49.9 per cent of the vote to James’ 48.2 per cent – a margin of 1.7 per cent.

Polls got it wrong again with the Michigan Senate race, indicating ahead of Election Day that Peters would solidly take the win with at least 5-7 per cent of the vote.

This outcome means the makeup of the Senate will mostly rely on elections held in January in Georgia, a state that requires candidates to earn 50 per cent of the vote to outright win or else force a runoff election.

Loeffler still wouldn’t have won the needed threshold even if she secured the 20.1 per cent of voters who were siphoned off by Georgia’s Republican Representative for its 9th District, Doug Collins, who launched a Senate bid.

The Georgia senator was never actually elected to her seat. Instead, in December 2019, she was selected by Georgia Governor Biran Kempy to succeed Senator Johnny Isakson, who resigned for health reasons.

Perdue, the other Republican senator for Georgia, has not yet been declared the winner – leaving it up-in-the-air whether he could also face a runoff against Democratic challenger John Ossoff.

With 98 per cent of the vote reporting as of Thursday morning, however, Perdue in a 2.3 per cent lead holding exactly 50 per cent of the vote. As the last few ballots filter in, if the Republican incumbent can hold onto that lead, or widen it, he could be declared the victor.

With such a close margin for a majority in the Senate, it’s likely that the final decision could come down to whether Loeffler and Perdue were to win their respective races – which may not be known until days before the swearing in of the 117th Congress. 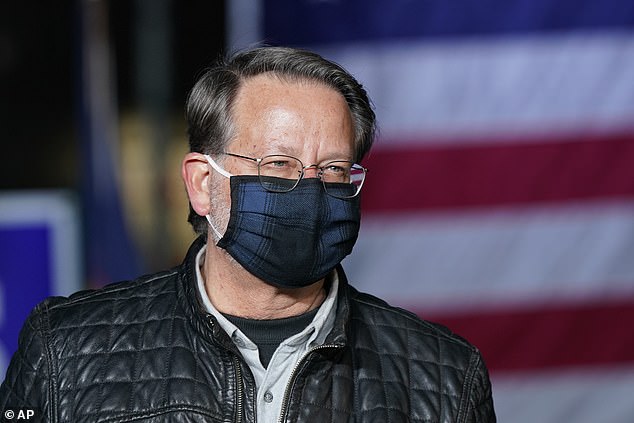 The latest Senate race to be called was late Wednesday night for Democratic Senator Gary Peters (pictured) in his reelection bid in Michigan. He won despite a closer-than-anticipated challenge from Republican John James 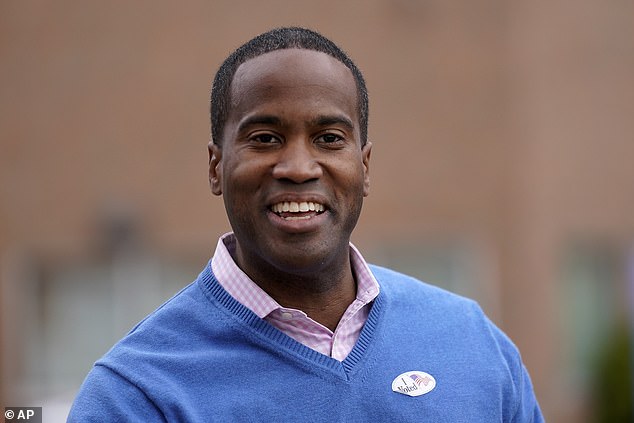 John James (pictured) gave the incumbent candidate a run for his money, only losing by 1.7 per cent despite polls indicating Peters was in a solid lead and would win by 5-7 per cent

Senator Thom Tillis of North Carolina was also one of the Republicans thought to be most at risk in the 2020 election. Although the race has still not been called in the Tar Heel State, Tillis is leading with 48.7 per cent of the vote with 93 per cent reporting.

His Democratic challenger Cal Cunningham holds 46.9 per cent of the vote – a slim 1.8 per cent margin.

Even though presidential Democratic nominee Joe Biden held a solid polling lead through the summer and fall in Michigan, it soon turned into one of the most hotly contested Senate battlegrounds.

James, who ran again after outperforming expectations and losing by 7 points in 2018 against Democratic Sen. Debbie Stabenow, returned to deliver an even closer race in 2020.

The rust belt state is also one of the battlegrounds most important for either Biden or President Donald Trump securing the White House.

Although Michigan has already been called for Biden with 99 per cent reporting showing a 2.7 per cent margin between the two candidates, Trump has launched a lawsuit against the state.

Trump’s campaign claims poll watchers in the state where not allowed to observe as ballots were counted – furthering his insistence that mail-in ballots are just a ploy for Democrats to ‘steal’ the election for Biden.

If the Senate were to maintain a GOP control, it would set Biden up for a lame duck presidency where he would face several blocks from the legislative branch – even with a Democrat majority House. 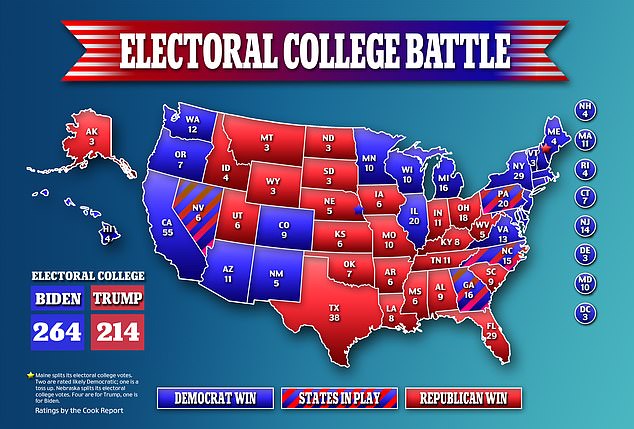 After defending his Senate seat on Tuesday and as majority leader, Mitch McConnell is in charge of controlling what comes to the upper chamber floor for a vote.

It’s likely McConnell and other Republicans would block any cabinet secretaries’ whom they don’t like – especially those they may feel are too progressive.

Biden also wouldn’t be able to get through federal court nominations.

Biden’s biggest obstacle, however, could be that he wouldn’t be able to ‘stack’ the Supreme Court.

The Democratic nominee has vowed to start a commission on expanding the courts – a move meant to counter Trump, with McConnell’s help, rushing through Judge Amy Coney Barrett’s confirmation to the Supreme Court days before the election.

Any move by Biden to expand the court to dilute its conservative bend would be stopped by McConnell, who would also be able to prevent any Biden appointments from getting a vote.

And it’s not just judicial and cabinet appointments that a Republican Senate could stop.

For one, Biden’s healthcare proposals include supporting an expanded public plan option similar to Medicare that would be available on the healthcare exchanges. Republicans are staunchly against this.

Biden has called for making public college tuition free for families earning $125,000 a year or less, which Republicans will also oppose because of the cost.