Crime fell overall by 32% during lockdown while drug and violent offences continued to rise the longer the restrictions were in place, figures reveal

Crime fell overall by 32 per cent during lockdown while drug and violent offences continued to rise as the longer the restrictions were in place, new figures have revealed.

Drug crime rose by up to 44 per cent during the coronavirus lockdown in England and Wales, compared with the same period last year, according to to the Office for National Statistics.

As lockdown continued, drug offences rose, reaching levels far higher than the same time last year. In May 2019, 14,343 offences were reported, compared with 20,687 four months ago.

Throughout the months of April and May, violent crime against the person also rose, but remained around the same average compared to last year.

A telephone survey of 6,470 households about their experiences of crime was carried out by the ONS and found it had fallen by around 32% compared to last year.

The ONS report, published on Wednesday, put this down to ‘proactive police activity in pursuing these crimes during lockdown’.

There are concerns some crimes, such as sexual offences – which fell during lockdown, went unreported as victims not feel safe informing police. 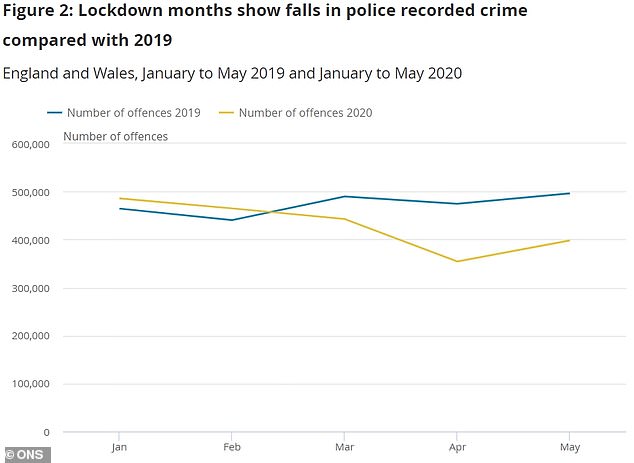 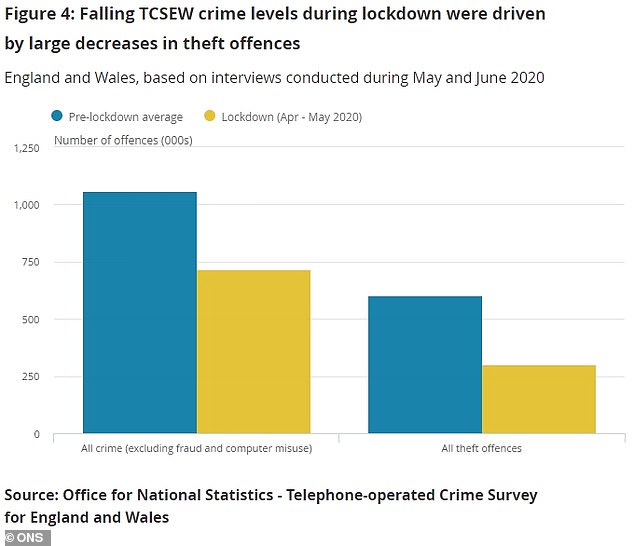 Crime fell by around 32 per cent in lockdown compared to this time last year, figures from the Office for National Statistics show

The ONS’ report said the rises were driven largely by drugs possession offences with ‘early indications’ suggesting this was ‘particularly evident in London’ where the Metropolitan Police had increased the number of drugs-related stop and searches it was carrying out during that time.

Overall police-recorded crime during lockdown was 25% lower in April and 20% lower in May compared with the same period in 2019.

It also fell 5% in March compared with February, the report said.

In particular, reports of theft fell in April and May to ‘almost half the level recorded’ during those months in the previous year.

But reports of crime rose again as lockdown restrictions began to ease, it added. 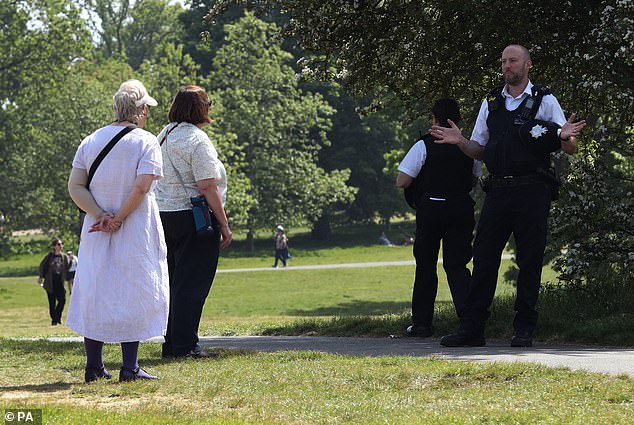 Police were out patrolling Victoria Park, London, and other open spaces during lockdown, but with people restricted from going outside, most crime rates fell

Billy Gazard, from the ONS Centre for Crime and Justice, said: ‘There was a significant fall in crime at the height of the coronavirus pandemic across England and Wales.

‘This was driven by reductions in theft offences, particularly domestic burglary and theft of personal property.

‘As this period coincided with the majority of people spending long periods at home during lockdown, it is not unexpected.’

But he said the ‘exception was police recording of drug offences, which increased through April and May’, adding: ‘This reflects proactive police activity as overall crime levels reduced.’

Crimes such as robbery and theft plummeted for obvious reasons during lockdown, however so did sexual offences.

Diana Fawcett, chief executive of the charity Victim Support, fears that a drop in report may not necessarily mean there was a drop in offences.

She said: ‘We know that while some crimes such as burglary and theft reduced during lockdown due to the restrictions, people contacting us for help as a result of other crimes such as domestic abuse, sexual violence, hate crime, fraud and anti-social behaviour increased as lockdown eased. 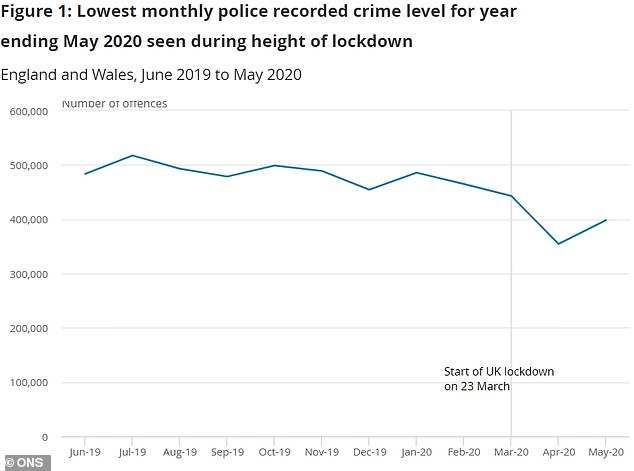 While reports of sexual offences may have dropped, victims may not have been able to safely make police aware of an offence, a support charity has warned

‘It is also important to highlight that many crimes have been under-reported during lockdown as victims may not have been in a position to safely report incidents to the police.

‘As lockdown restrictions continue to ease, we’ve seen a significant rise in the number of people contacting us for help and support, and we are still anticipating further increases.

‘While official statistics show that there was a fall in reported crime during the coronavirus pandemic, this does not mean that crime or the impact it has on people had gone away.’

The report gives the first official indication of some police-recorded crime figures since the pandemic took hold in the UK.

But its findings are limited due to the difficulties in gathering statistics posed by the circumstances caused by the pandemic and because some figures are not yet available.

For example, police reports of domestic abuse are recorded quarterly, so official figures indicating the prevalence of this crime during lockdown are yet to be made public.