Career criminal who ‘dodged justice’ for nearly 30 years is finally jailed for killing WW2 veteran, 71, and his sister, 74, who were beaten and restrained during bungled burglary in 1993

A career criminal has been jailed for life with a minimum term of 32 years for killing a World War Two veteran and his sister nearly 30 years ago.

Danville Neil, 65, will die behind bars after he killed the elderly brother and sister in a bungled burglary in August 1993.

Mrs Castle suffered a heart attack and Mr Bryan went into cardiac arrest after being beaten and smothered as their flat was ransacked in the search for valuables.

Police found Mrs Castle’s body slumped in an armchair, with her brother lying on the floor.

A hammer and a screwdriver were recovered from the crime scene.

The murders went unsolved for nearly 30 years until Neil’s DNA was found on the knot of a strap used to tie Mr Bryan’s hands.

The court heard that Neil was a career criminal with a string of convictions for some 15 burglaries between 1973 and 1998. 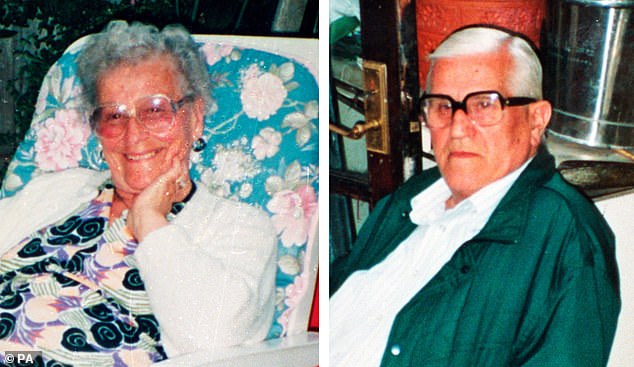 Neil pulled two wedding rings and two diamond rings from Mrs Castle’s fingers, but failed to find some £4,000 in cash – some of which had been stashed in socks, the Old Bailey was told.

No-one witnessed the attack, but screams were heard by neighbours, suggesting a ‘prolonged burglary and attack’, jurors heard.

Jurors were shown images of the scene, with cushions up-ended on the sofa, broken glass from a vase, a lampshade askew in the corner, a pair of glasses on the floor, and Mrs Castle’s handbag on the ground with the contents spilling out.

Following a trial at the Old Bailey, Neil was found guilty of Mr Bryan’s murder and of Mrs Castle’s manslaughter.

Sentencing him on Friday, Mrs Justice Cheema-Grubb said: ‘You dodged justice for nearly 30 years, now justice has caught up with you.’

She later said: ‘This was a notorious and universally appalling crime, both because of your history and the doubly fatal consequences of what you did.’

The judge told Neil his actions were ‘unscrupulous’ and ‘lacking in mercy’, and the siblings died ‘as a result of your greed’. 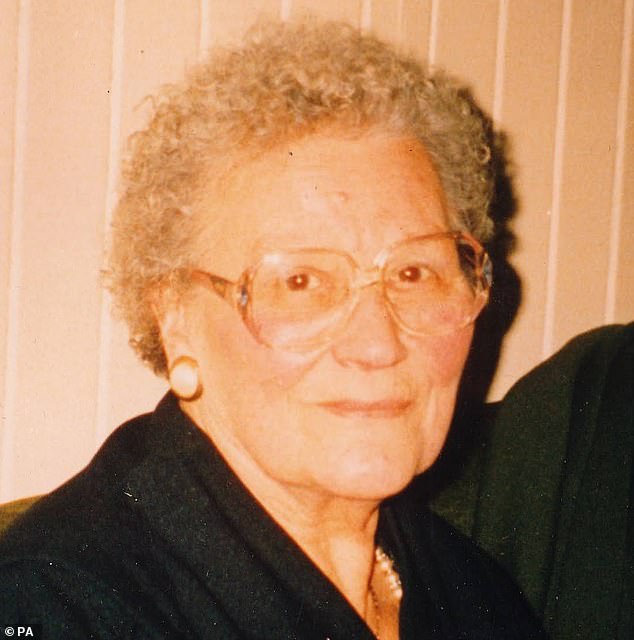 Police found Mrs Castle’s body slumped in an armchair, with her brother lying on the floor

She added: ‘You were a well-established and experienced career burglar by 1993.

‘But you had it in you to offend in a way which was far more serious.’

In 1984, he carried out two home invasions in three months in which the occupants were physically assaulted. 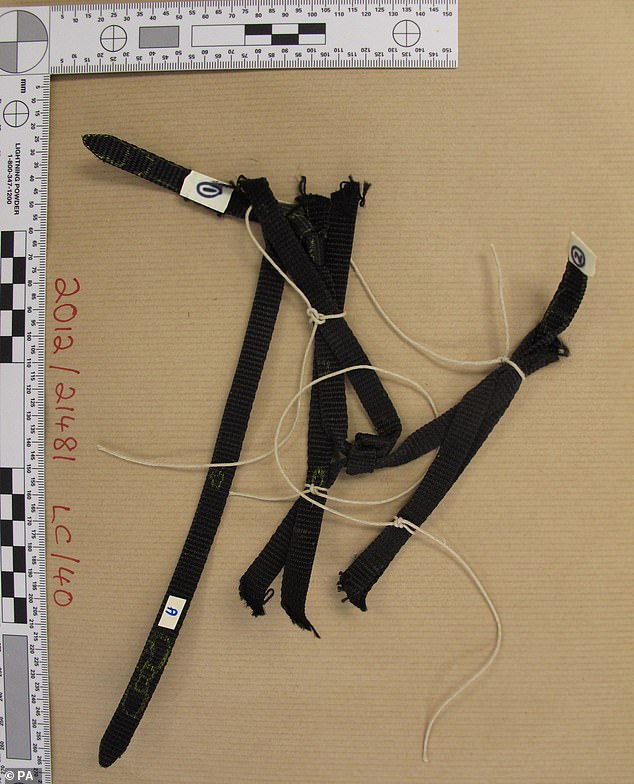 He was jailed for the two violent burglaries and released on licence in August 1992 – a year before the double murders.

During his trial, Neil had accepted his DNA was found at the scene of the killings, but denied he had been there or knew the victims.

He claimed an innocent explanation for the forensic link was that he had sold Mr Bryan binoculars at a car boot sale and it was the strap which was used to bind him.

But Mrs Castle’s grandson remembered his great uncle was keen on gadgets and had two sets of binoculars which he would have bought new.

Jurors heard that the victims had lived together in a flat in Bethnal Green since Mr Bryan was invalided out of the Army in 1945, with Mrs Castle being widowed in 1987.

A statement from Mrs Castle’s granddaughter, read out to the court, described her as a ‘pillar of the community who was well loved and respected by everybody’.

It went on to say the pair ‘showed all the things which are good in people’.

Another family statement said ‘for almost 30 years a weight has been over our shoulders’.

Mrs Justice Cheema-Grubb told the court: ‘The suffering of one of them was compounded by knowing that the other had died or was dying, that is inescapable.

‘They were left virtually opposite each other, it is not difficult to imagine, though no-one would want to, the anguish they must have endured at the suffering of the other.’

Cheers and applause were heard in the public gallery as the sentence was given.

His hands were tied with a black binoculars strap and his feet with a brown dressing gown cord.

Neil was finally arrested in 2020 after his DNA was found on the binoculars strap.

He had 13 convictions recorded against him for burglary between 1973 and 1998.

Neil and accomplice William Victor Norris had raped two women in their homes in south London in 1984.

Neil and William Norris were both jailed for 12 years at the Old Bailey in 1985 and Neil was let out a year before the murders of Mr Bryan and Mrs Castle.

He denied but was convicted of the murder of Mr Bryan.

Neil was cleared of murdering Mrs Castle, but convicted of her manslaughter.

Neil initially refused to attend his sentencing hearing but later appeared over video link from HMP Belmarsh wearing a black face covering and holding a cane.

Reading the family impact statement, Alison Morgan, prosecuting, told the court of how ‘Annie’ and ‘Billy’ were both ‘brave, loving, and generous, thoughtful people’.

She said: ‘Billy was a kind-hearted, thoughtful and caring man. Annie was a caring mother, an extremely thoughtful pillar of the community. Well-loved and respected by everybody. Annie would do anything for anyone, she was loved by everyone.

‘The cowardly, greedy and thoughtless act by a completely uncaring person makes our loss harder to take.’

Mrs Justice Cheema-Grubb told Neil: ‘You dodged justice for nearly 30 years, but last week justice caught up with you.

‘You subjected the siblings to an atrocious ordeal. Two elderly people who were obviously vulnerable, both of them died as a result of your greed.’

She branded Neil’s acts as ‘a notorious and universally appalling crime.’

Describing the life of William and Anne as ‘peaceful’ the judge recalled them spending Sunday afternoons in the country club, trips bird watching and visits to the local family owned pub.

‘These were conventional past-times of people who had no enemies,’ she said.

Neil had ransacked the home of Mr Bryan and his sister as he searched for jewellery.

Police believed he grabbed thousands of pounds in cash but police later found £4,665 in bundles hidden around the flat.

‘They were beaten and restrained,’ said Ms Morgan.

‘William Bryan was beaten and smothered, which caused him to go into cardiac arrest.

‘It took nearly 30 years for Danville Neil to be identified as the person responsible for these terrible events.’

In June 1984, Neil broke into a house in Penge with Norris.

The house was occupied by a couple and their three children, all of whom were asleep when Neil and Norris gained entry.

Neil told the parents: ‘Your kid’s dead, right we’ve killed your little girl, got it. Tell us where the money is or we’ll smash your heads in.’

The children did not suffer any physical injuries during the incident.

‘The defendant and his accomplice beat the adult occupants with a metal bar and smothered [the woman] with a pillow such that she was unable to breathe,’ the prosecutor said.

‘Danville Neil attempted to pull [the wife’s] ring off her fingers. He only stopped when she said ‘What are you going to get for that, 30 bob?’.

‘Both robbers assaulted [the woman].

‘In due course she picked out Mr Neil on an identification parade as one of her attackers.’

Both Neil and Norris were convicted of raping the woman.

In August 1984, the duo broke into a different woman’s house in Norbury.

Norris put his hand over the woman’s mouth, ‘making it difficult for her to breathe’.

The pair also raped this woman.

They asked her where her cheque book, handbag and cards were before making off with a stereo and £15 in cash.

Neil and Norris were both jailed for 12 years at the Old Bailey in 1985.

Neil was released on licence in August 1992.

Mrs Castle had moved into Priam House in 1945 with her husband and her brother started living there when he was ‘invalided’ out of the army that same year because of tuberculosis.

Her husband died in 1987 and the siblings continued to live with each other.

Mrs Castle was ‘very security conscious’ and would ‘always’ use the chain on the door if she was unsure of someone outside.

Neil denied both murders, going to the address that night and rejects ever having gone to Priam House.

Up until the first day of the trial, Neil had offered no explanation as to why his DNA was found on the strap.

But Ms Morgan said ‘an innocent explanation’ was put forward just before the jury was sworn in.

He was arrested in October 2020 on suspicion of both murders.

Neil denied to officers ‘all knowledge of the burglary and the killing’.

‘He said he had never been to Priam House,’ Ms Morgan said.

‘He said at that time he stayed in his area, which was south London.

‘He said did not go to Bethnal Green.

‘He said he was unable to work due to a back injury.’

Giving evidence during the trial, he continued to deny that it was him, saying: ‘You can’t put me in the house.’

He received life imprisonment with a minimum term of 32 years to be served before he can be considered for parole.

Anne’s daughters, Janice and Cynthia, said: ‘Our mother spent her whole life in east London where she raised her five children, who went on to give her 13 grandchildren and 15 great-grandchildren.

‘She was the most wonderful loving and caring mother and grandmother who was thoughtful in every way. She always put everyone before herself and was a great pillar of the community – well loved and respected by all who knew her.

‘When her brother Billy became ill after the war, our parents brought him to live with us and they both cared and looked after him with the greatest of attention.

‘He remained living with Mum until that dreadful day. The fear they must have experienced will never leave us. Uncle Billy was a kind-hearted, thoughtful and generous uncle to all the family. Always happy and so grateful for how he had been looked after.’