Daycare owner who shot her husband after being told he ‘molested the kids she looked after’ is DENIED bail: Devastated family say she is full of remorse but ‘didn’t want him to touch one more child on her watch’

The daycare owner who shot her husband after learning of allegations that he’d been molesting the children in her care was denied bond today despite growing pleas from her family for her to be freed.

Shanteari Weems, 50, shot her husband James Weems Jr, 57, on Thursday July 21 at the Mandarin Oriental hotel in Washington DC. She had just been told by one of the mothers whose child attends her daycare that James, a retired cop and security guard, molested their child.

It was the second time such an accusation had been made against him; Baltimore Police started investigating him earlier this month over other abuse claims.

Weems’ attorney told DailyMail.com that she drove to the hotel to confront her husband but that when she arrived, he became ‘violent’.

She shot him, allegedly in ‘self-defense’, and then was arrested an hour later. He was taken to the hospital and survived, and he is now facing child abuse charges himself.

On Friday, Shanteari appeared before a judge at the Superior Court in Washington DC, supported by her adult children but the judge deemed her a safety risk and denied her bail. 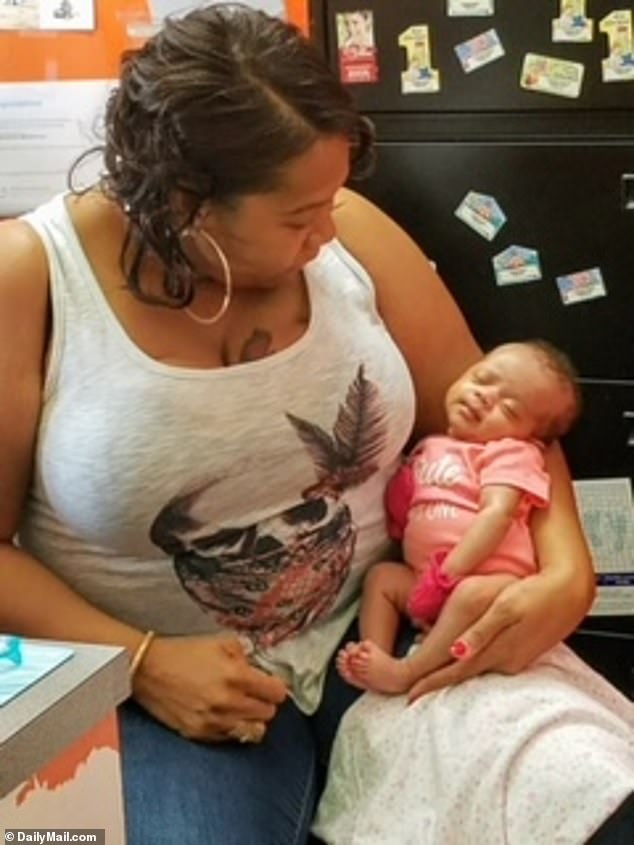 Daycare owner Shanteari Weems, 50, in a photo provided to DailyMail.com. She has spent 20 years working in childcare before her husband was accused of child molestation earlier this month 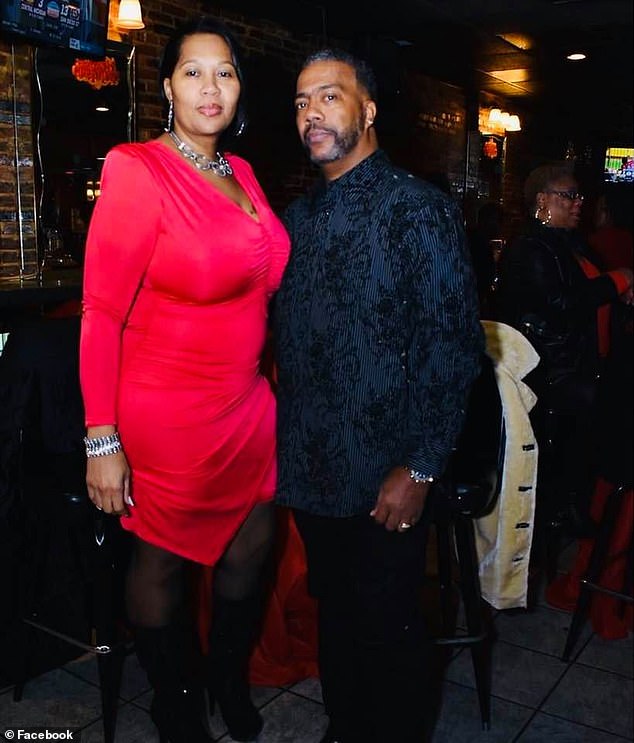 Shanteari Weems, 50, and her husband, James Weems Jr., 57. Today, she is in custody on intent to kill and weapons charges after shooting him, and he is in the hospital. He has been arrested with child sex offenses relating to alleged abuse at the daycare center his wife has run since 2015

Prosecutors argued that she could not be trusted in society because she had written a manifesto which read in part ‘on my way to shoot James’.’

Weems’ son Andrew Barrett was visibly outraged by the decision.

Speaking to DailyMail.com afterwards, family attorney Tony Garcia said: ‘It’s ironic that they think she is a safety risk when the only reason she’s in jail is because she was trying to protect the safety of children.’

He added that she was ‘relieved’ her husband had been charged with child sex crimes because it proves ‘she was right’.

‘She is remorseful but it’s a relief that law enforcement believes he molested children.

‘He was denying it, but now that it’s been confirmed. She was right. He was molesting them. And in fact, it’s worse than what she thought because there are three children involved, not two.’

Weems will return to court on August 9.

There are growing calls for her to be freed by many who do not blame her for shooting her husband in light of the heinous allegations against him.

Weems, a mother herself who has spent 20 years working in childcare, drove from her home in Randallstown, Maryland, to DC in a frenzy after being told by one of the parents at her daycare that her husband had abused their child.

It was the second accusation against him; the first shuttered Lil Kidz Kastle, the daycare Shanteari runs where her husband worked as a bus driver. 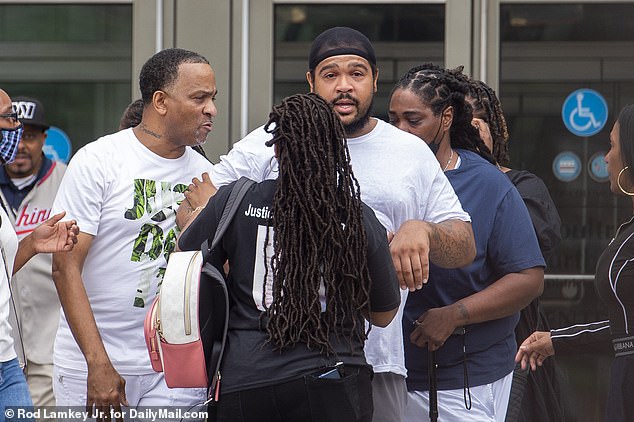 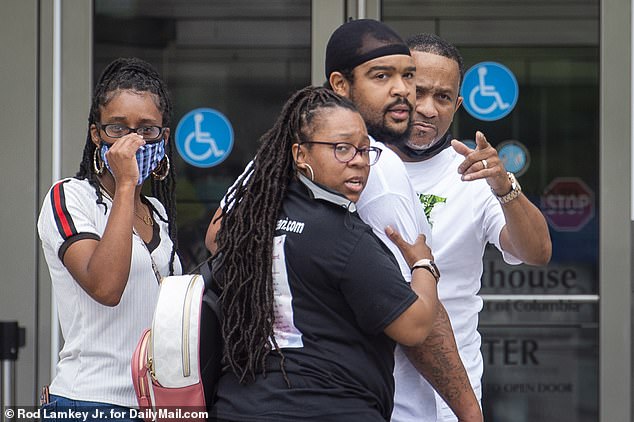 The woman’s family had gone to court in a show of support, begging the judge to free her 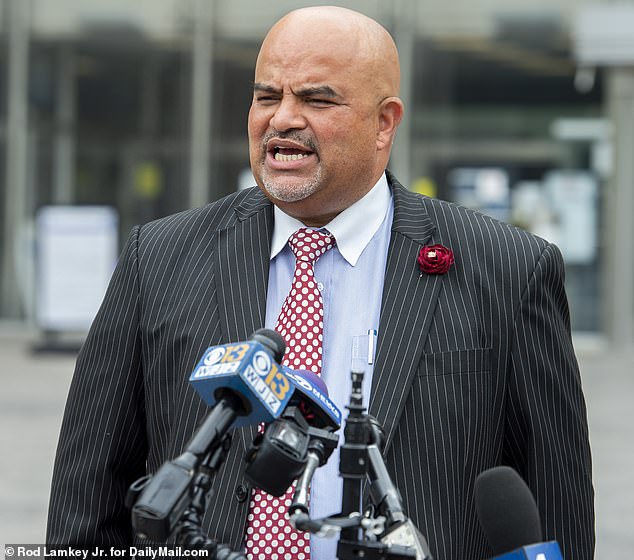 Shanteari’s lawyer Tony Garcia told DailyMail.com she used her own gun to shoot her husband but that she takes it ‘everywhere’. He said she was remorseful about shooting him, but was determined to protect the kids at her daycare center

When Shanteari heard the second allegation, she drove 50 miles south to Washington to confront him in his room. Her lawyer claims he became violent, and that is when she fired a weapon at him in self-defense. It remains unclear whose weapon it was.

Now, Shanteari’s lawyer and family are fighting for her to be freed, while James awaits his first court date on child sex abuse charges.

‘She is in hell. This is a woman who was completely and utterly traumatized by having these mothers come to her.

‘She did not want him to touch another child… not on her watch – that’s for damn sure.

‘She has been doing this for 20 years. She built this business from scratch. Her whole life’s work is that mothers trust her and allow her to care for their kids while they go to work. To have this happen… and it is not even an employee. 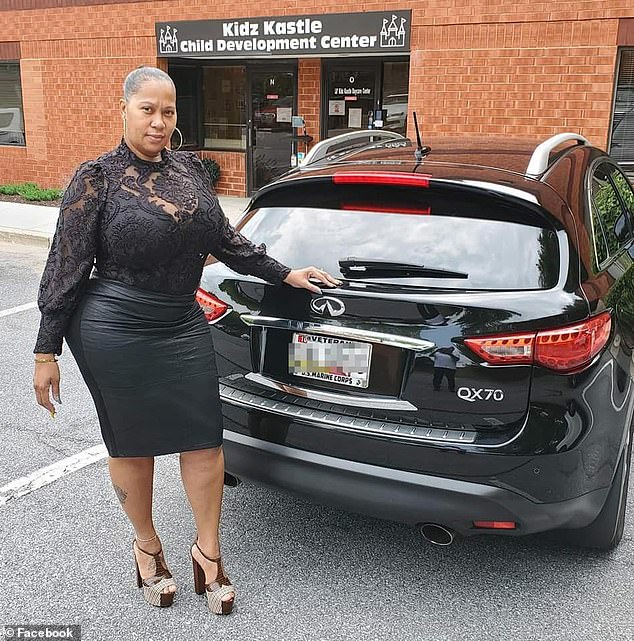 Weems is shown outside the daycare center in Owings Mills, Maryland. She was furious when the center was closed earlier this month after the first allegation against her husband 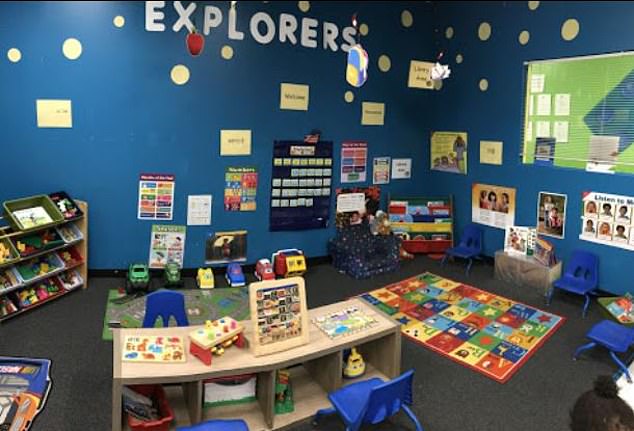 An interior of the Lil Kidz Kastle Child Development Center. Shanteari’s attorney told DailyMail.com: ‘She has been doing this for 20 years. She built this business from scratch. Her whole life’s work is that mothers trust her and allow her to care for their kids while they go to work. To have this happen… and it is not even an employee. It’s her husband’ 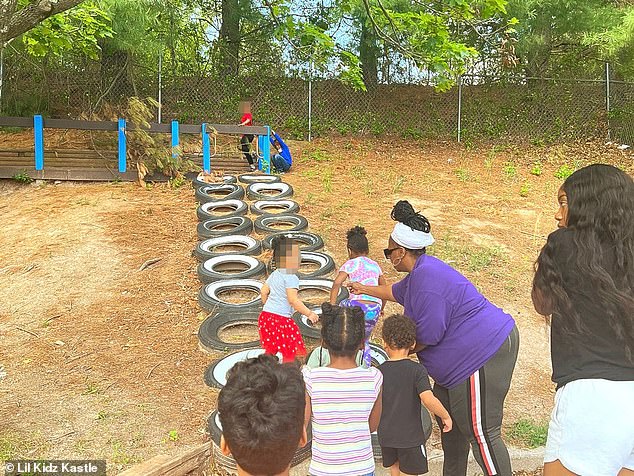 The first allegations were made against James Weems earlier this month. As a result, the daycare was closed abruptly.

Weems is a 57-year-old retired cop who had been working in private security, and who had been helping at the daycare by driving a bus.

Before the incident at the hotel on Thursday, the daycare center in Owings Mills, Maryland, was shut down by the first allegation against him.

It’s unclear whether all of the children involved are boys or girls but there are believed to be three separate allegations against Weems now.

On Thursday, he was in DC and his hardworking wife, who also volunteers for a street-cleaning nonprofit, heard from another mother.

‘She wanted to see him to ask him if it was true or not so she drove to DC. Now he is a retired marine, he is a former cop, he’s worked in executive security and he is armed. She went hoping that the allegation was not true.

‘He responded violently to being accused and she had to defend herself.’

What exactly happened inside the room for the next hour is unclear. Police arrived after an alarm in the room was triggered.

During a one-hour standoff inside, James cried out that he had been shot in the leg and in the head. 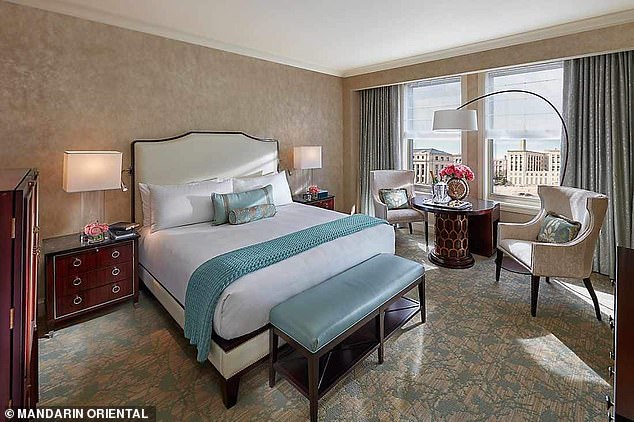 The couple had been at the $400-a-night hotel in Washington DC for James, a retired cop, to attend an event 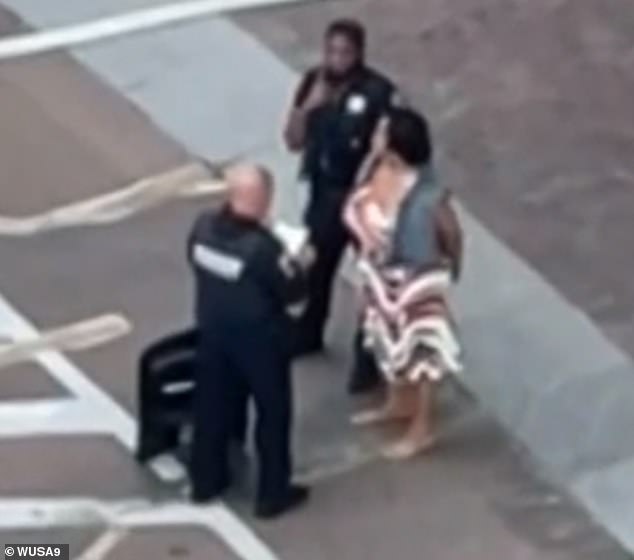 Daycare owner Shanteari Weems, 50, is shown being taken into custody on July 20 after shooting her husband in the head. She had just been told that he was molesting some of the kids in her daycare

Shanteari started writing down notes which included her desire to ‘paralyze’ her husband. She said she wanted him to ‘pay’ for what he had done to the kids, and her only regret was ‘not putting a bullet through his head’.

Eventually, she was arrested and he was taken to the hospital, where he remains with a broken femur.

He is conscious and is expected to survive the incident, despite claiming to have been shot in the head.

Shanteari’s friends and family are rallying behind her, vowing to fight for her freedom on social media and launching GoFundMe campaigns to pay her legal fees.

‘We hope to get bail, that is our hope,’ her attorney said. She will appear in court on Friday.

The details of the allegations against Weams remain scarce. Maryland Child Protective Services declined to comment on the case citing privacy laws.

A spokesman for the Department of Education would not confirm when specifically it received complaints against Weams. 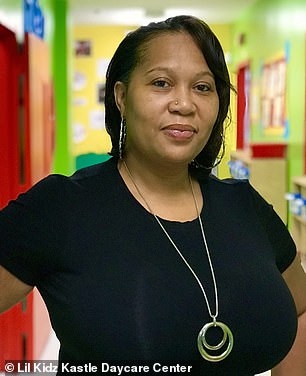 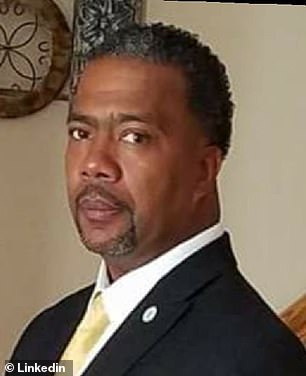 Shanteari Weems, 50, is the owner of Lil Kidz Kastle in Owing Mills, Maryland

The Baltimore County Police Department said it had been investigating Weems since earlier this month.

‘Baltimore County detectives began to investigate Weems earlier this month after they were notified of the abuse. Weems faces multiple charges.

Meanwhile the woman’s friends are fighting for her to be freed.

‘Shanny and I have been friends for 32 years… for the last few years she has supported my student-workers and Baltimore Clean Streets program.

Her adult children set up a GoFundMe account dedicated to raising money for her defense but it was torn down at the last minute. 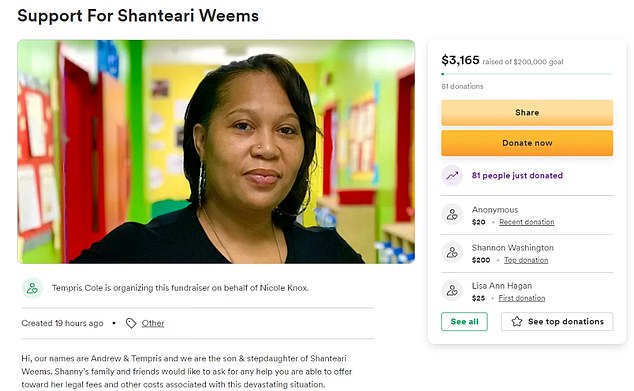 A GoFundMe page set up to pay for her defense raised $3,000 before the website took it down, and people are now inundating the daycare’s Facebook page demanding for her to be released. Her next court appearance is on Friday.