Ancestors of William Barak are making a last-minute plea to philanthropists to help return significant art works created more than 120 years ago by the esteemed Aboriginal leader to the Wurundjeri people.

The items will go under auction in New York on Thursday, the day Australians pause to mark National Sorry Day and the start of National Reconciliation Week. 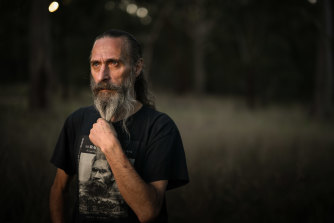 The feature piece, a painting titled Corroboree (Women in possum skin cloaks) is expected to fetch close to $500,000, while a parrying shield containing rarely seen traditional designs has a estimated price in the vicinity of $20,000.

Both were created by Barak, the Wurundjeri Woi Wurrung ngurungaeta – or headman – in the final years of the 19th century. 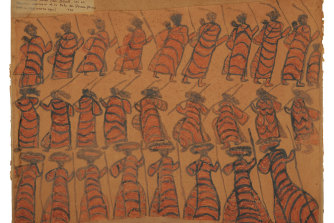 “Anybody who wants to do something about reciprocity: These are more than cultural artefacts. They are windows into our culture. This is Uncle William’s way of preserving our history. He’s seen the impacts of colonisation from day one,” Hunter said.

As a boy, Barak witnessed the arrival of European colonists on his Country in the 1830s and it’s said he was present when First Nations clan elders met with John Batman’s party on the banks of Merri Creek.

As a clan leader in his later years, Barak produced about 50 culturally rich works, many of which were “gifted” to non-Indigenous colonisers before he died in 1903.

The two pieces being auctioned in New York were presented to Jules de Pury, a young man from Switzerland visiting family who had settled in the Yarra Valley area.

Sotheby’s catalogue notes say de Pury returned home with the works in 1897 or 1898. The pieces remained with the de Pury family for more than 100 years. They were passed to Sotheby’s Geneva recently after the death of de Pury’s grandson, Pascal.

Another descendent and Wurundjeri traditional owner, Mandy Nicholson described the items as priceless. She said they should be handed back, not sold to international collectors and dealers.

“We are the traditional custodians of the knowledge embedded in that image,” she said.

“It is priceless, there shouldn’t be a monetary tag attached to something like this. It’s one of the few visuals we have of our traditional cultural practice. He is the main one who has provided us with a stepping stone into the past so that we can rekindle today that cultural knowledge that he painted in there,” Nicholson says.

“Barak’s images represent a tangible connection to ancestral knowledge and a precious record of Aboriginal ways of life both before and on the frontier,” Russell-Cook said.

In April, the Wurundjeri Woi Wurrung Cultural Heritage Aboriginal Corporation launched a crowdfunding project with the aim of acquiring the work outright. As of Tuesday, it had attracted about $60,000. Sotheby’s estimates the painting will sell for between $430,000 and $570,000.

In 2016, another late 19th century artwork by Barak titled Ceremony was sold for more than $512,400 by another international auction house. The work showed how the Wurundjeri Woi Wurrung people traditionally painted their bodies and dressed during a cultural gathering, as well as depicting their traditional use of possum skin drums.

The Age has tried to contact de Pury via the auction house.