Diane Abbott has signalled her opposition to Boris Johnson’s plans to toughen up sentences for terror offences in the wake of the London Bridge attack.

Mr Johnson has committed to introducing mandatory minimum sentences of 14 years for the most serious terrorist offences and he has said some offenders should never be released.

His approach has been characterised by some as a promise to ‘lock ’em up and throw away the key’.

Ms Abbott suggested she is against such tougher sentencing as she tweeted a quote from, and a link to, a column published by the Guardian entitled ‘locking up extremists isn’t working in our cash-strapped prisons’. 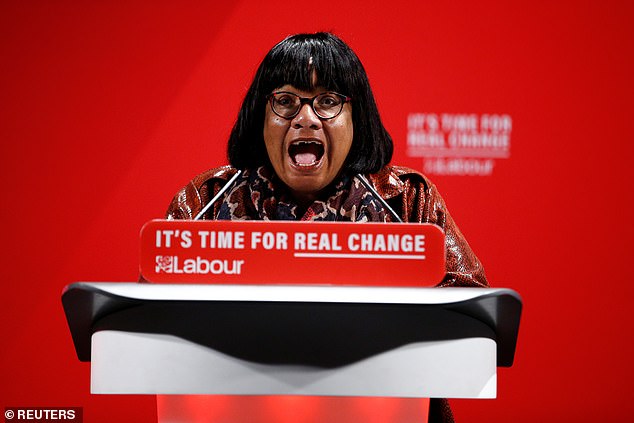 Diane Abbott, pictured at an election campaign event in London on November 26, has signalled her opposition to longer sentences for terror offences

The column, written by the newspaper’s former home affairs editor Alan Travis, cites cuts to prison and probation services and argues that there should be a focus on improving deradicalisation programmes because most convicted terrorists will be released ‘eventually’.

Ms Abbott tweeted the following concluding comment from the column: ‘The “lock ’em up and throw away the key” battle cry may suit a panicked politician in the middle of a general election campaign, but it isn’t going to keep us safe from another Usman Khan.’

It comes after Labour leader Jeremy Corbyn said yesterday that convicted terrorists should ‘not necessarily’ have to serve the entirety of their prison sentences.

Mr Corbyn said today that convicted terrorists should only be released from prison after completing a ‘significant proportion’ of their jail sentences.

He also stressed that they must have been rehabilitated so they present no threat to the public and must also remain under strict supervision.

Labour’s shadow attorney general Shami Chakrabarti told the BBC it was ‘unedifying’ to talk about ‘throwing away the keys’.