New York: Once upon a time, a 7-year-old refugee living in a homeless shelter sat down at a chess board in school and learned how to play. His school then agreed to his mom’s plea to waive fees for him to join the chess club.

The boy wasn’t any good at first. His initial chess rating was 105, barely above the lowest possible rating, 100. 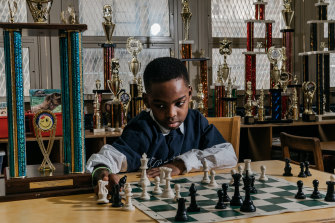 But the boy, Tanitoluwa Adewumi — better known as Tani — enjoyed chess as an escape from the chaos of the homeless shelter, and his skills progressed in stunning fashion. After little more than a year, at age 8, he won the New York state chess championship for his age group, beating well-coached children from rich private schools.

I wrote a couple of columns about Tani at that time, and readers responded by donating more than $US250,000 to a GoFundMe campaign for Tani’s family, along with a year of free housing. It was heartwarming to see Tani running around the family’s new apartment, but I wondered: Is this kid really that good?

It turns out he is. This month, as a fifth grader, Tani cruised through an in-person tournament in Connecticut open to advanced players of all ages and won every game. He emerged with a chess rating of 2223, making him a national master.

At 10 years, 7 months and 28 days old, Tani became the 28th-youngest person ever to become a chess master in the United States, according to John Hartmann of US Chess. Tani had one of the fastest rises, for he began playing chess only at the relatively late age of 7. And he’s aiming higher. 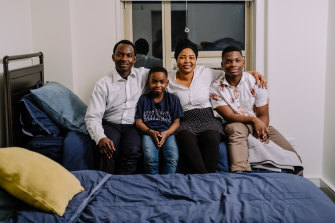 Tanitoluwa Adewumi, 8, his brother, Austin, and their parents, Kayode and Oluwatoyin, in the apartment they obtained after a GoFundMe drive raised more than $US200,000 on their behalf, in 2019. Credit:Christopher Lee/The New York Times

“I want to be the youngest grandmaster,” he told me. “I want to have it when I’m 11 or 12.” The youngest person ever to become a grandmaster, Sergey Karjakin, achieved that honour at 12 years, 7 months.

“I’m delighted to see Tani’s rapid progress,” said former world chess champion Garry Kasparov. “The sky is the limit, and I’m the last person to say that chess is not a viable career path.”

Tani has watched the Netflix series The Queen’s Gambit, about an orphan girl and outsider who proves a chess prodigy. “I definitely did see myself in it,” he said.

He may see himself more directly on the screen. A book Tani and his parents wrote about their journey has been optioned for a feature film by Paramount Pictures. The script is being written by Steven Conrad, who wrote The Pursuit of Happyness, and Trevor Noah is to produce.

“We look back and see where we came from and where we are today, and where we hope we’re going — and every time we look back we give thanks to God,” said his mother, Oluwatoyin Adewumi. She has just qualified as a patient care technician and is looking for work.

The family fled Nigeria because of fears of Boko Haram, the Islamic militant group, according to his father, Kayode Adewumi, who now is a real estate agent with Douglas Elliman Real Estate.

When Tani won the state championship, several private schools offered him places, but the family decided to keep him in the public school that had nurtured him. The Adewumis also used the $US250,000 contributed by readers to start a foundation that helps other homeless people and refugees.

The Adewumis now live on Long Island, paying their own expenses, and the pandemic has been a struggle. Told that Tani needed a top chess coach to develop, the family scrimped and hired a grandmaster, Giorgi Kacheishvili, to coach Tani three times a week. “When the money is too much, I reduce it to two times a week,” his father said.

Another challenge is travel. Tani is sometimes invited to tournaments abroad but can’t go while his immigration case is pending for fear he might not be allowed back into the United States.

The larger lesson of Tani’s story is simple: Talent is universal, while opportunity is not. In Tani’s case, everything came together. His homeless shelter was in a school district that had a chess club, the school waived fees, he had devoted parents who took him to every practice, he won the state tournament (by a hair) and readers responded with extraordinary generosity.

But opportunity shouldn’t require a perfect alignment of the stars. Winning state chess tournaments is not a scalable solution to child homelessness.

My challenge as a columnist is that readers often want to help extraordinary individuals like Tani whom I write about, but we need to support all children — including those who aren’t chess prodigies. That requires policy as well as philanthropy, so let me note: President Joe Biden’s proposed investments in children, such as child tax credits and universal pre-K, would revolutionise opportunity for all struggling children.

Maybe we can be inspired by the wisdom of America’s newest chess master. I asked Tani how he feels when he loses.

“When you lose, you have made a mistake, and that can help you learn,” he told me. “I never lose. I learn.”