Berlin: A German court has ruled that a Muslim doctor should not be granted citizenship after he refused to shake hands with the woman presenting him his naturalisation certificate during his citizenship ceremony.

According to the administrative court of Baden-Württemberg, the Lebanese man had forgone his right to become a German because his refusal to shake the bureaucrat's hand was evidence that he saw her as "posing the threat of sexual seduction". 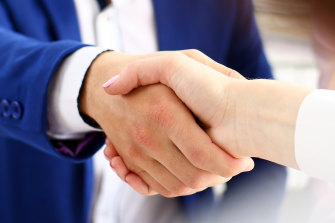 The doctor was denied citizenship after refusing a handshake. Credit:iStockphoto

The judges explained that obtaining German citizenship was dependent on the applicant being able to demonstrate that he lived according to the values set out in the German constitution, which enshrines sexual equality.

A handshake "has a long traditional of signalling greeting or saying farewell that exists irrespective of social status or sex", the ruling stated.

The handshake "holds a special importance" because of its formal use in the completion of a business transaction and as a signal of agreement in certain courts, the judges added.

The incident occurred in 2015 at a citizenship ceremony that was supposed to be a formality after the man had obtained the highest possible score in his citizenship test, an exam that probes how well immigrants understand German history and its democratic values.

When the female bureaucrat offered her hand and he declined to shake it, she refused to hand over his certificate.

The 40-year-old has an otherwise impeccable record of successful integration. He moved to the country as a language student in 2002 before qualifying as a doctor and working his way up to the position of consultant physician at a hospital in southern Germany.

To support his case, he said that he had made a promise to his wife never to touch another woman. But the court remained unswayed, describing his actions as "fundamentalist" and reflective of "a Salafist worldview".

The judges were also unimpressed by a statement he made to the effect that he would not shake anyone's hand in the future, be it a male or a female. They said that the man would have to use the gesture in the future in order to carry out important societal functions.

The judges added that they saw his concession on not shaking anyone's hand as a purely tactical move.

The man can now dispute the ruling at the federal level, his last chance to have the decision overturned.

The dispute over handshakes comes after a school in Berlin was forced to apologise after one of its teachers called an imam "a misogynist" when he failed to shake her hand in 2016.