Dominic Cummings has links with two of the four companies picked out in the National Audit Office’s damning report.

The former chief adviser to the Prime Minister, 48, has connections to artificial intelligence firm Faculty and research company Public First, which have secured contracts worth more than £3.8million.

Mr Cummings was not named in the public watchdog’s devastating report, which found that bidders with ‘VIP access’ to ministers were ten times more likely to win Covid contracts than those who did not.

Mr Cummings worked with Faculty – which was awarded three contracts worth £3million for data analysis – on the Vote Leave campaign in 2016. 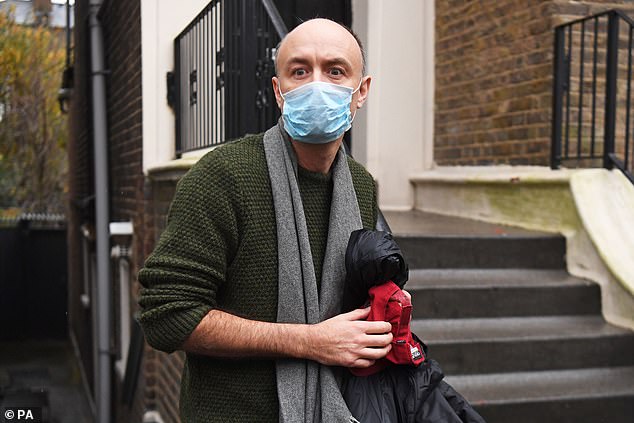 He also has long-standing links to Public First, run by James Frayne and his wife Rachel Wolf, who co-wrote the Conservative Party’s 2019 manifesto.

His association with Mr Frayne dates back to at least 2000, when they worked on a campaign against Britain joining the euro.

The NAO report criticised the fact that the £840,000 Public First contract was awarded retrospectively.

It identified that the company’s founders have also worked for Michael Gove, the Cabinet Office minister.

The report said there was no evidence that Mr Gove had been involved in the awarding of the contract, but added that it ‘found no documentation on the consideration of conflicts of interest’.

There is no evidence to suggest that Mr Cummings played any role in either firm securing the contracts. 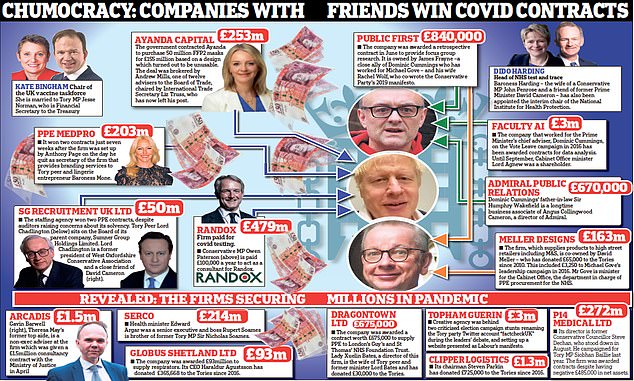 The former chief adviser to the Prime Minister, 48, has connections to artificial intelligence firm Faculty and research company Public First, which have secured contracts worth more than £3.8million

Another company scrutinised in the report is Ayanda Capital, which was handed a £253million contract to supply PPE.

The deal was brokered by Andrew Mills, who was one of 12 advisers to the Board of Trade, chaired by International Trade Secretary Liz Truss. Mr Mills is also a ‘senior board adviser’ to Ayanda Capital.

Some 50million masks, worth £155million, delivered by the company were of the wrong specification and cannot be used.

Ayanda said last night: ‘Suggestions that the masks are not fit for purpose or are somehow unsafe to use by frontline NHS workers are simply untrue and we are advised defamatory.’

On top of the three companies identified in the NAO report, the Mail can reveal 12 more included in the graphic above.

They include Meller Designs, which secured £163million in PPE contracts. It is run by Tory donor David Meller.