The US President, 73, called it a "devastating day" for Democrats, saying they have hurt themselves badly ahead of the 2020 presidential elections. 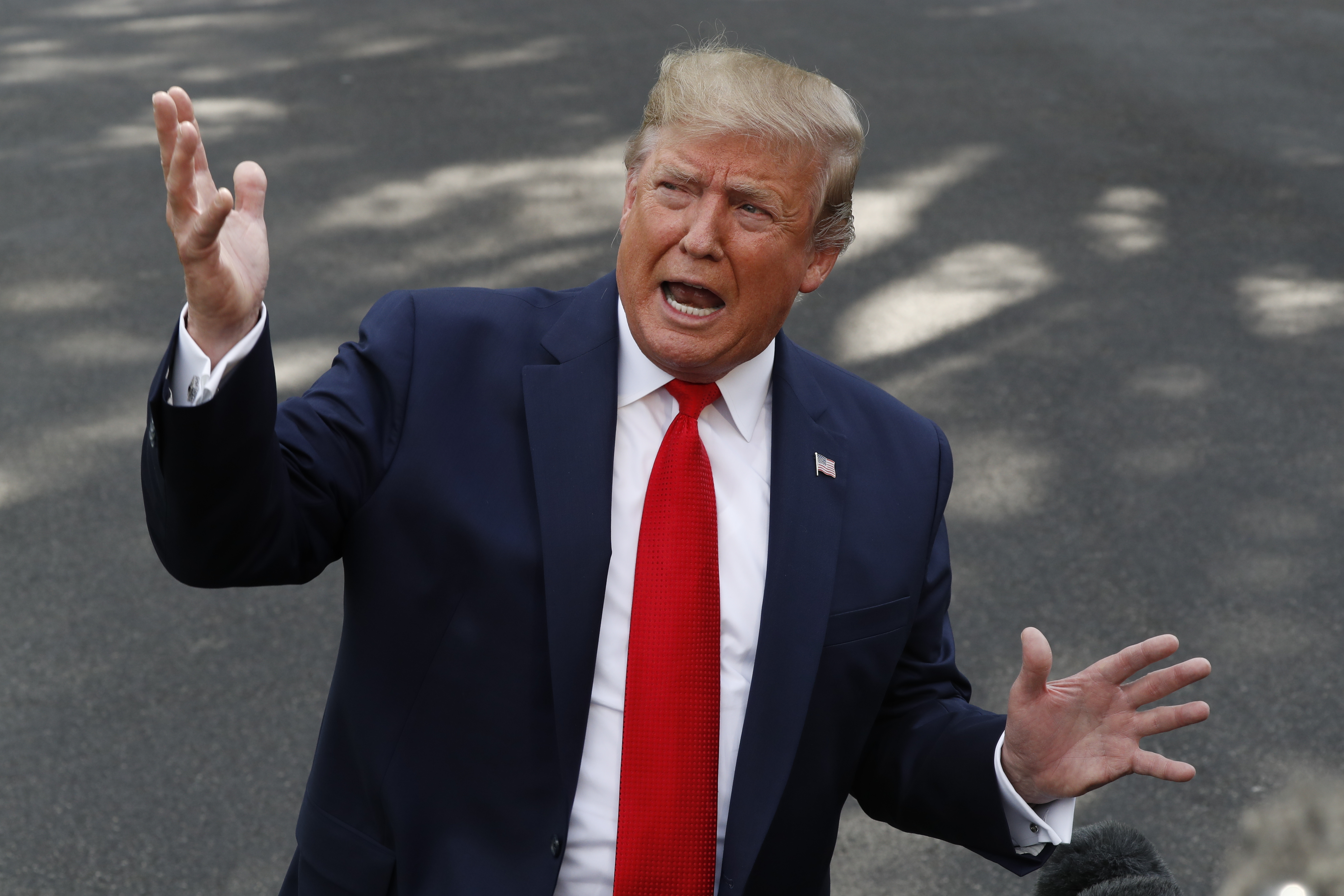 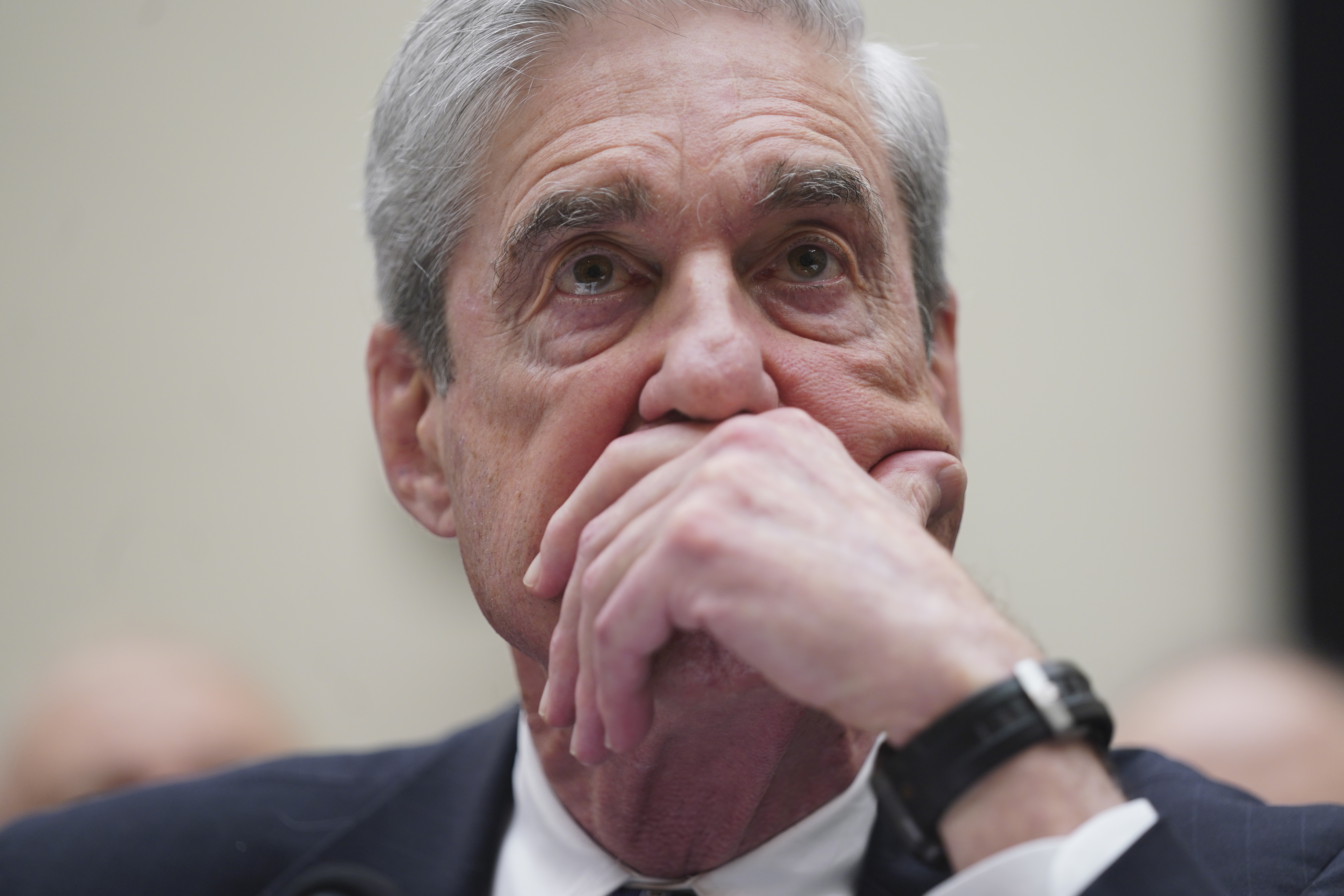 Special Counsel Mueller appeared before two congressional hearings on Wednesday to testify about his two-year investigation into Russian interference in the 2016 election.

But it was not a commanding performance from the ex-FBI director, 74, who viewers described as appearing “confused and disorientated”.

Trump seized on the criticism, saying: “If you listen to the internet, this was one of the worst performances in the history of our country.”

He added Mueller's testimony was “obviously not very good” and had a “lot of problems”. 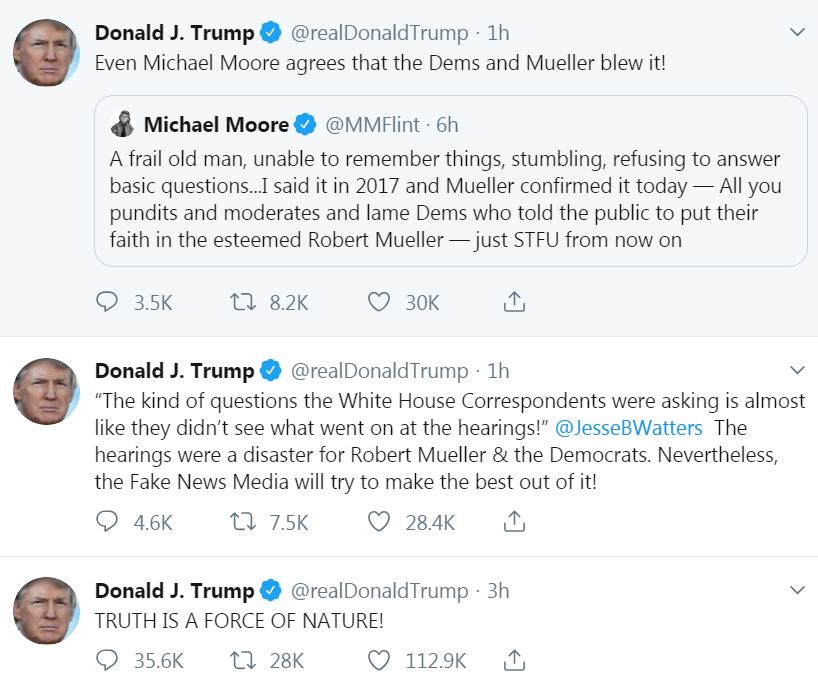 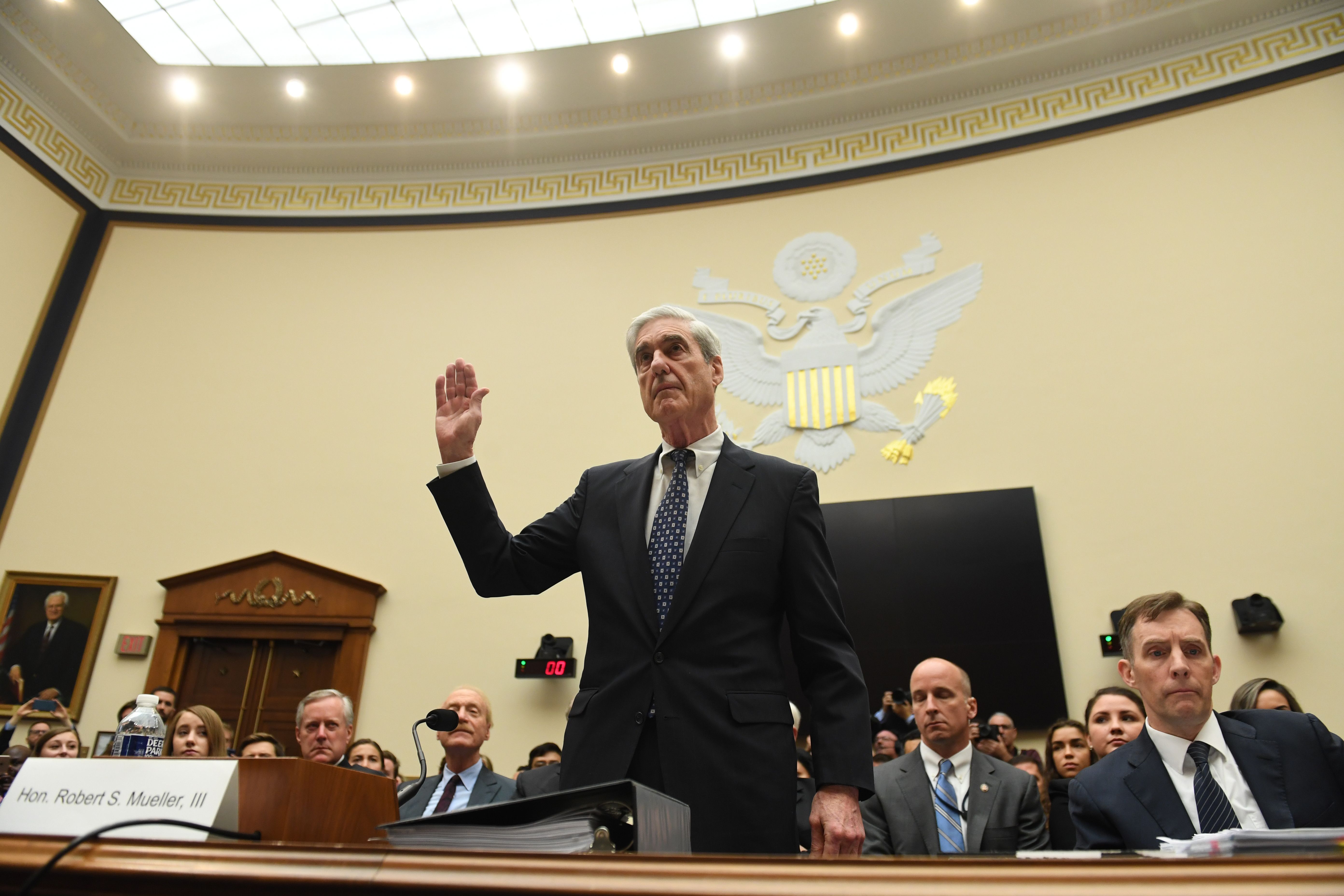 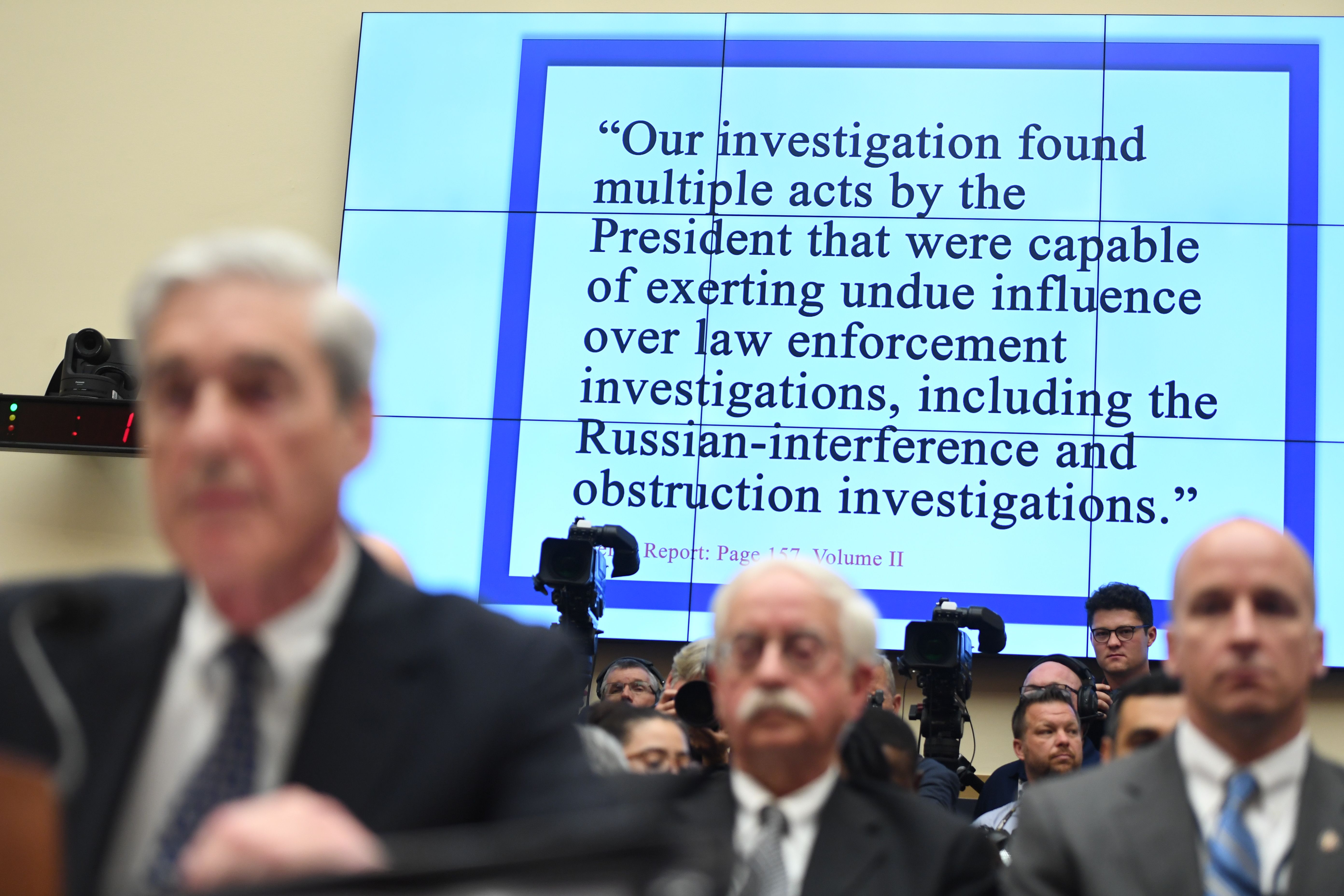 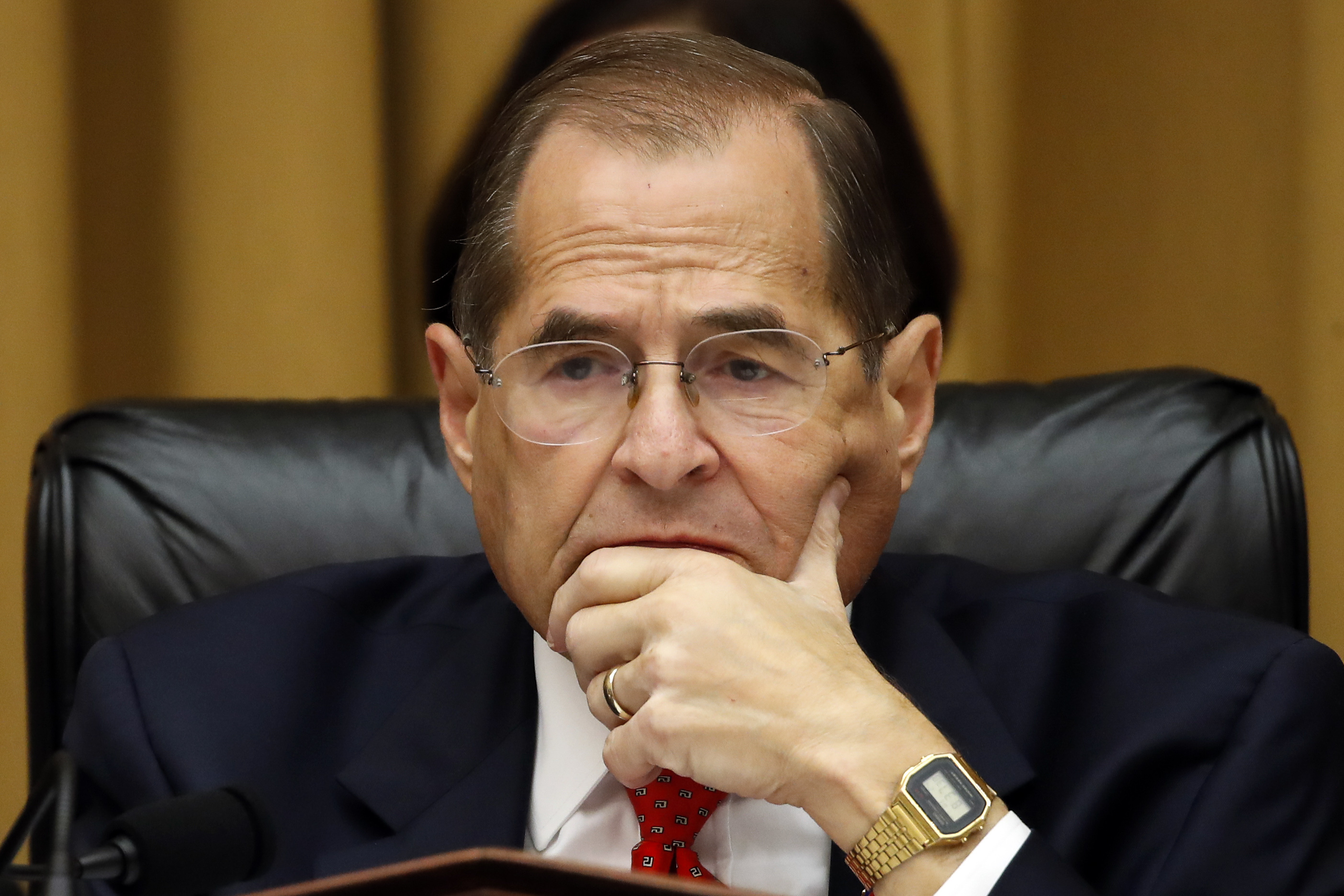 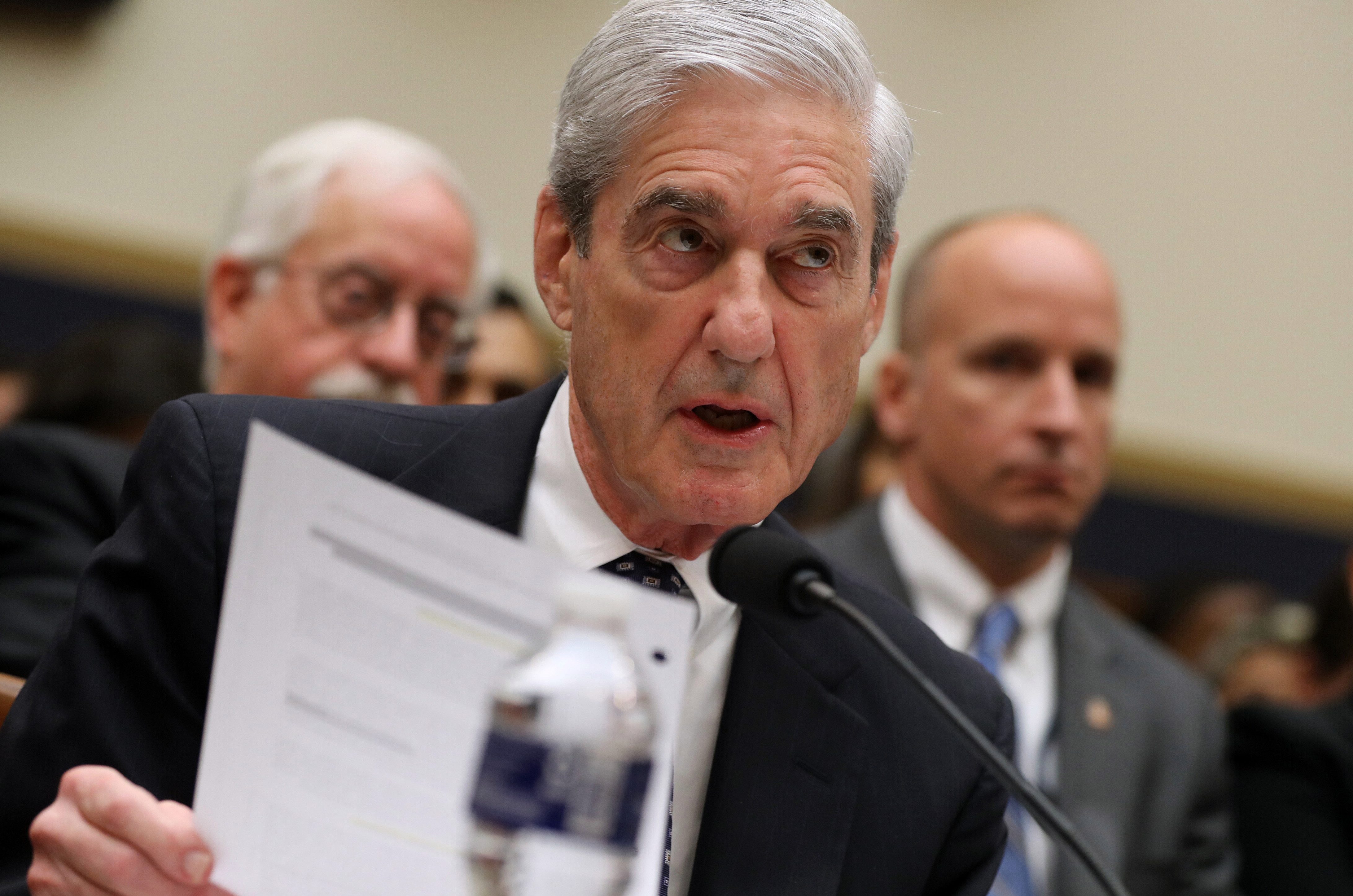 “Obviously he did very poorly today. I don't think there's anybody who would say he did well,” said Trump.

The President allowed that “in all fairness to him he had nothing to work with”.

In a series of tweets, Trump took a victory lap and even thanked Democrats for their part in the hearings.

He seized on criticism from online pundits – including Liberal filmmaker Michael Moore who branded Mueller “frail and stumbling”.

Trump replied: “Even Michael Moore agrees that the Dems and Mueller blew it!”

On numerous occasions, Mueller asked for questions to be repeated and responded with one-word answers.

At one point, he seemed to reach for the word "conspiracy" as he sought to answer whether his team found evidence of "collusion" between the Trump campaign and Russia.

A Democrat helpfully filled in the blank.

Mueller could barely be heard at times and mumbled through certain responses.

“I was surprised that Mr. Mueller was so disorientated,” Republican Arizona Rep. Debbie Lesko told The New York Post after the initial three-hour testimony.

“He was unable to answer some basic questions, which really surprised me,” she said.

“He also seemed to contradict previous statements he had made and some of the things in his report, so that was surprising to me, I wasn’t expecting it.”

“He can’t accurately remember facts, evidence, or even his own conclusion,” Meadows wrote on Twitter, calling the investigation “a weapon to target a president they hated.”

But Mueller did bluntly dismiss Trump's claims of "total exoneration" in the federal probe of Russia's 2016 election interference.

In the opening minutes of the Judiciary Committee hearing, Chairman Jerrold Nadler, a New York Democrat, asked about Trump's multiple claims of vindication by the investigation.

"Did you actually totally exonerate the president?" Nadler asked.

COULD TRUMP STILL BE PROSECUTED?

Nadler also asked whether the President "could be prosecuted for obstruction of justice crimes after he leaves office".

In March 2017, Mueller submitted a 448-page report detailing the findings of a two-year investigation into whether the Trump campaign colluded with Russia.

The report did not contain evidence of a criminal conspiracy between the Trump campaign and the Russian government.

But it did describe numerous occasions when the president possibly sought to obstruct investigations into allegations of a conspiracy, which would itself be a criminal offence.

Mueller also affirmed that he could not have said publicly that the president had committed obstruction of justice, even in in the event that that's what his investigation concluded.

This is because the Office of Legal Counsel, an office in the US Department of Justice, has said previously that a sitting president cannot be indicted for a criminal act.

The precedent was established at the time of investigations into possible criminal acts committed by presidents Nixon and Clinton.

Mueller said that to attempt to indict the president for obstruction of justice would have been "unconstitutional".

'NOT A WITCH HUNT'

When Rep. Adam Schiff, the Democratic chairman of the House intelligence committee, asked, "Your investigation is not a witch hunt, is it?"

"It is not a witch hunt," Mueller flatly replied.

In a long day of congressional testimony, Mueller warned that Moscow's actions represented and still represent a great threat to American democracy.

He condemned Trump's praise of WikiLeaks, which released Democratic emails stolen by Russia.

And he said of the interference by Russians and others: "They are doing it while we sit here. And they expect to do it during the next campaign."

His report, he said, should live on after him and his team.

"We spent substantial time assuring the integrity of the report, understanding that it would be our living message to those who come after us," Mueller said.

"But it also is a signal, a flag to those of us who have some responsibility in this area to exercise those responsibilities swiftly and don't let this problem continue to linger as it has over so many years.

The Mueller Investigation was launched in May 2017 to investigate allegations that the Russian government had interfered in the 2016 election, and that the Trump campaign had colluded with it.

The FBI had been investigating the activities both of Russian operatives and members of the Trump campaign since July 2016, four months before the November election.

Six months after becoming president, Trump fired FBI director James Comey, who would later claim he had lost his job after refusing a request by Trump that parts of the FBI probe be dropped.

Eight days later, Robert Mueller, a widely-respected lawyer, government official, and former director of the FBI, was appointed as a special counsel to take over the FBI’s work.

In the US, a special counsel can be appointed to investigate offences such as violations of the law, mismanagement, or abuse of authority by government employees or elected officials.

The investigation attracted swathes of media attention and speculation, and in March of this year Mueller submitted a 448-page report detailing his findings.

The report did not find evidence of an actual conspiracy between Russia and the Trump campaign, and ultimately declined to recommend that charges be brought.

It did, however, detail numerous examples of possible collusion, and of attempts by Trump to impede investigations into the allegations against him, including an attempt to have Mueller himself fired.

It added that: “Congress has authority to prohibit a President’s corrupt use of his authority in order to protect the integrity of the administration of justice.”

In other words, what happens next will depend on what Congress decides to do.

Trump, claiming vindication despite the renewal of serious allegations, focused on his own political fortunes rather than such broader issues.

"This was a devastating day for the Democrats," he said. "The Democrats had nothing and now they have less than nothing."

Mueller was reluctant to stray beyond his lengthy written report, but that didn't stop Republicans and Democrats from labouring to extract new details.

Trump's GOP allies tried to cast the former special counsel and his prosecutors as politically motivated.

They referred repeatedly to what they consider the improper opening of the investigation.

Democrats, meanwhile, sought to emphasize the most incendiary findings of Mueller's 448-page report and weaken Trump's re-election prospects in ways Mueller's book-length report did not. 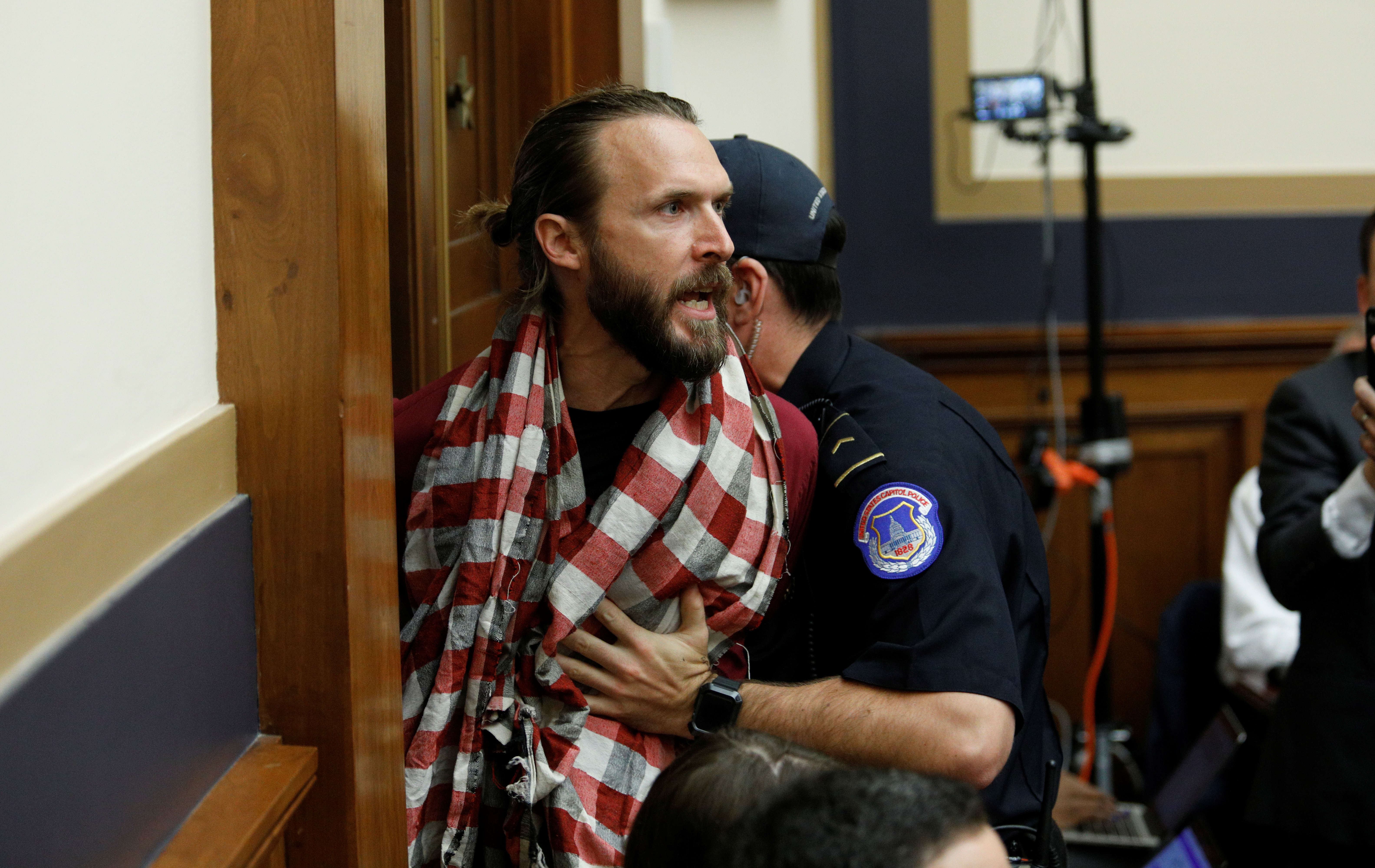 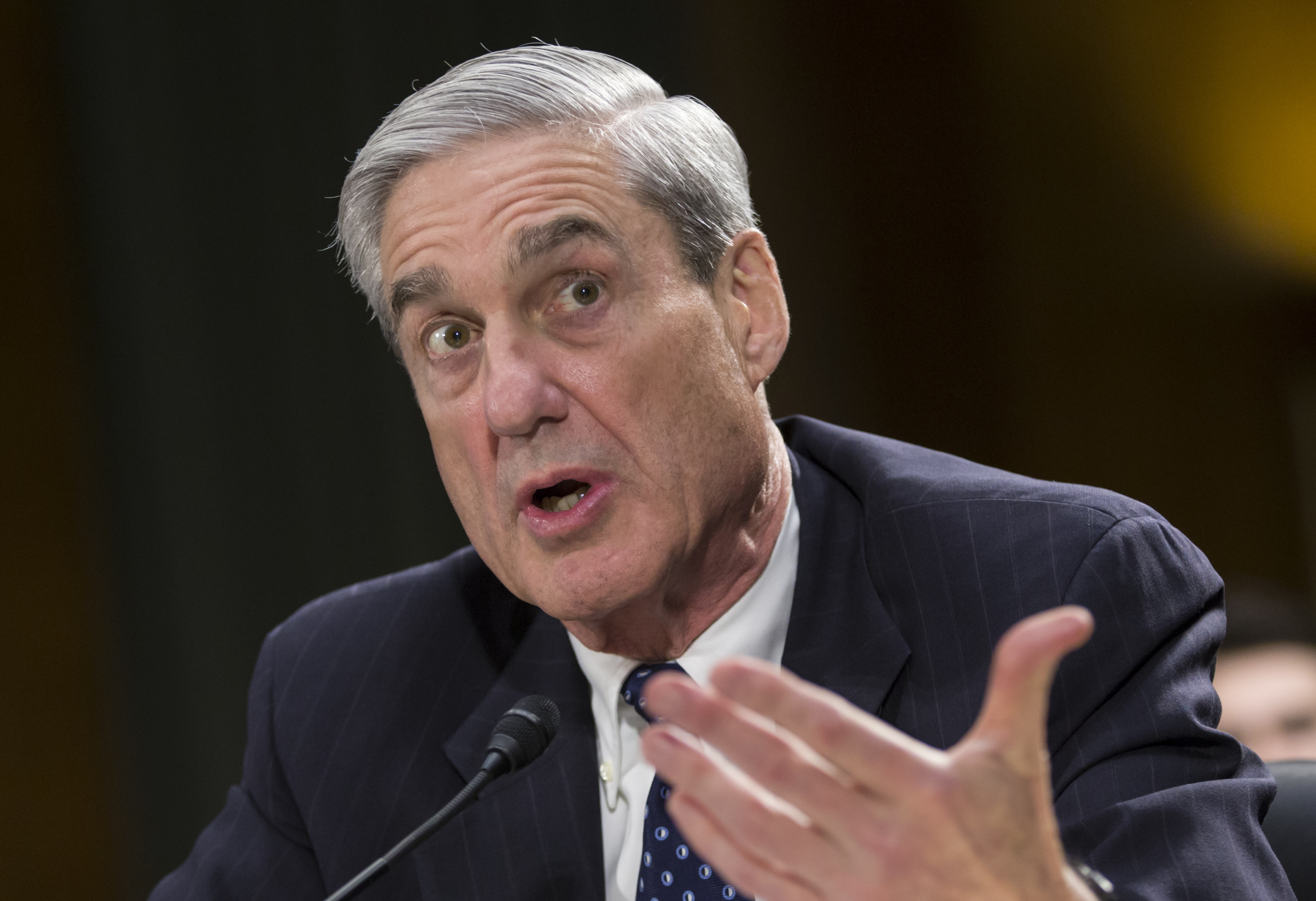 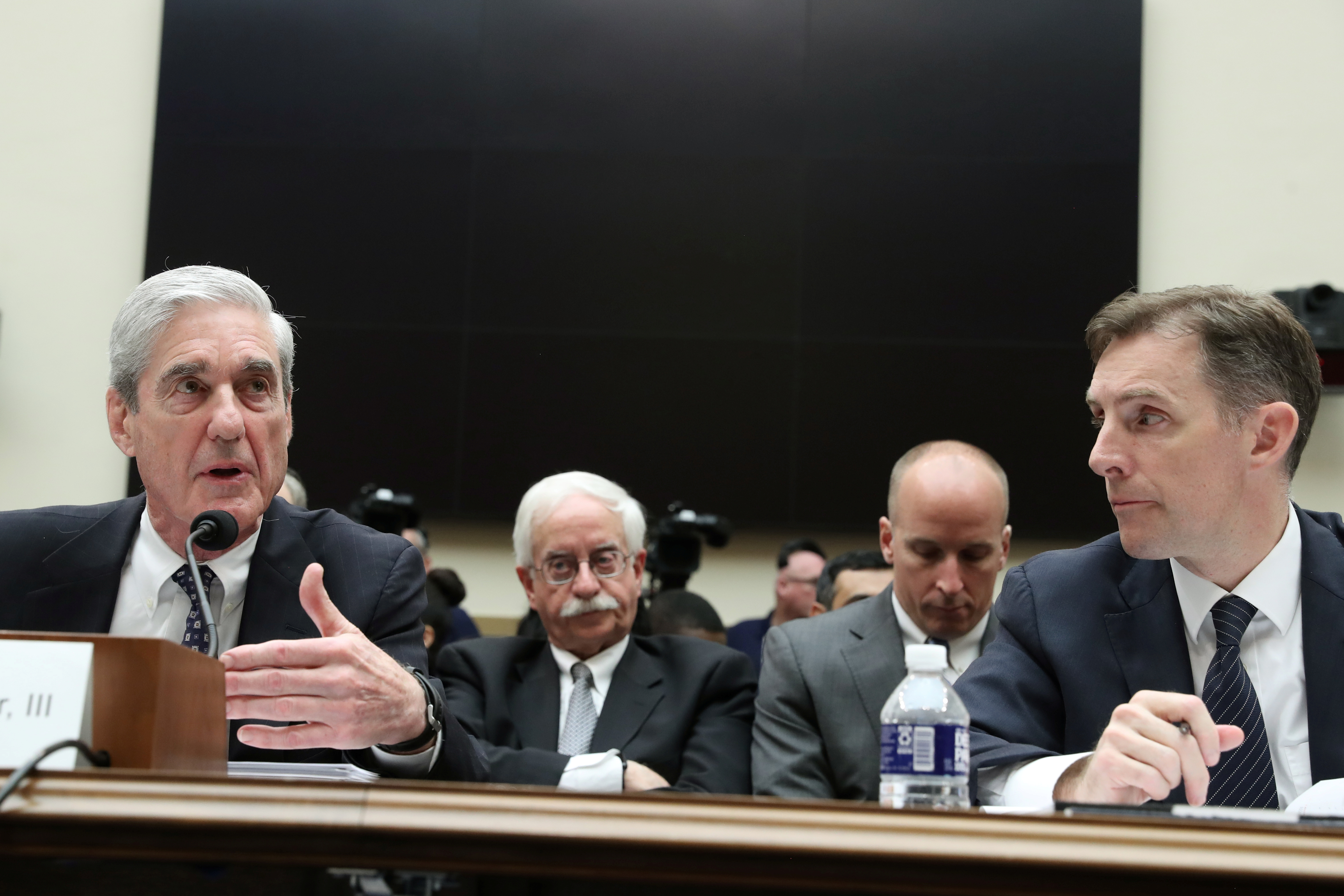 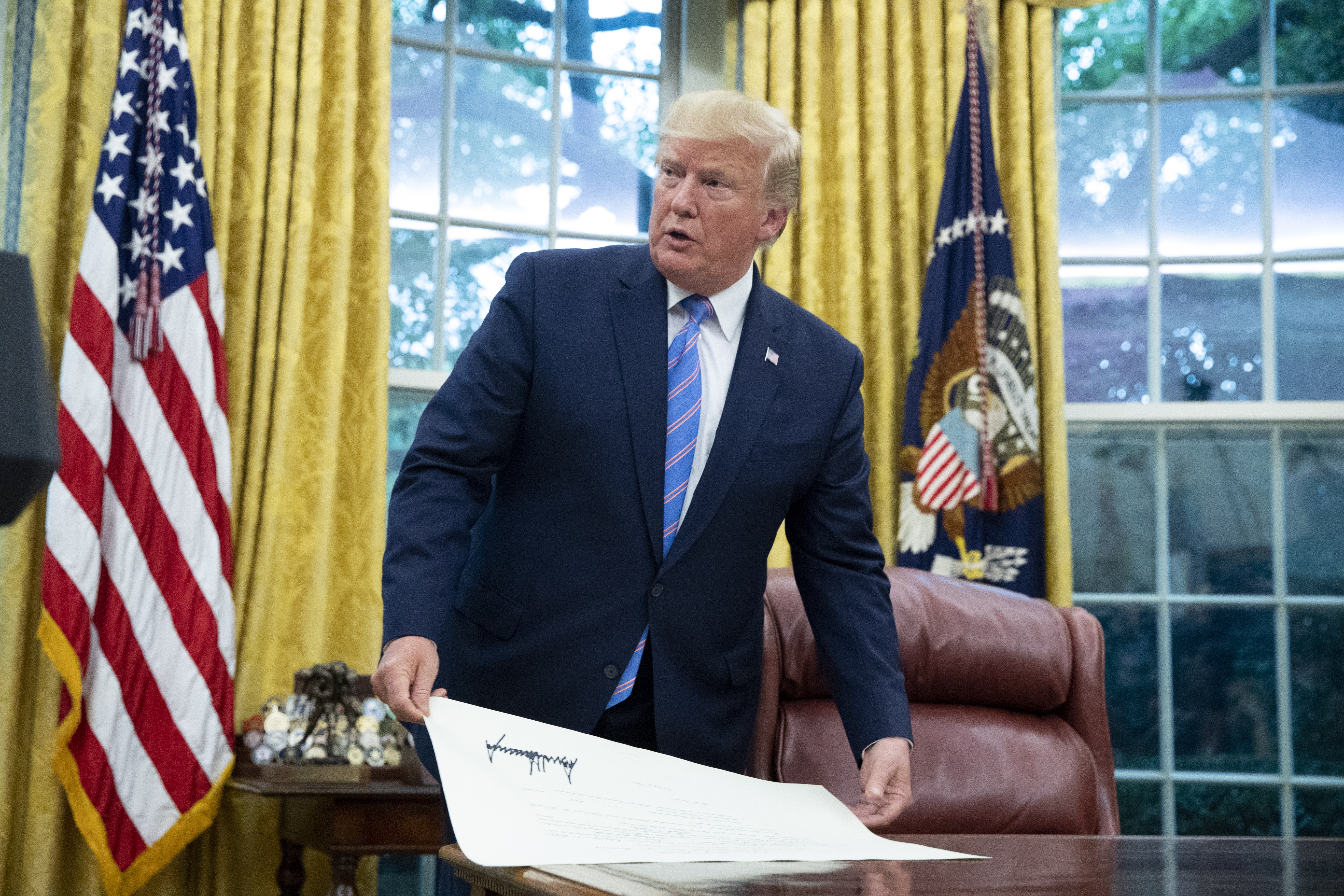