Washington: US President Donald Trump sent an extraordinary letter to his Turkish counterpart last week urging him not to be a "tough guy" and a "fool" by allowing thousands of people to be slaughtered in north-eastern Syria.

In the letter, released on Wednesday local time (Thursday AEDT), Trump told Turkish President Recep Erdogan that history would regard him as "a devil" if he oversaw mass bloodshed in the Kurdish-dominated region.

The release of the letter came during a dramatic day in Washington in which a meeting between Trump and Democratic House leaders descended into a slanging match, with US House Speaker Nancy Pelosi describing Trump going into a "meltdown" over a House of Representatives vote condemning his Syria withdrawal. 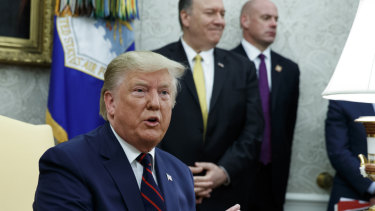 "Let's work out a good deal!" Trump said in the letter to Erdogan, dated October 9. That was the day Turkey sent troops into Syria, a decision that followed Trump's decision to withdraw US troops from the area.

He continued: "History will look upon you favourably if you get this done the right and humane way.

"It will look upon you forever as the devil if good things don't happen.

Michael Fullilove, executive director of the Lowy Institute, a foreign policy think tank, said: "I have spent a great deal of time in archives reading presidential correspondence. I have never seen anything like this."

Trump's combative meeting with Pelosi and Democratic Senate Leader Chuck Schumer was his first since Pelosi announced an impeachment inquiry into the President last month.

"He was insulting, particularly to the Speaker," Schumer said following the meeting.

"She kept her cool completely. But he called her a third-rate politician. … It was sort of a diatribe, a nasty diatribe not focused on the facts."

Pelosi later clarified that Trump called her a "third-grade politician".

"I pray for the President all the time, and I tell him that," Pelosi said.

"I pray for his safety and that of his family.

"Now we have to pray for his health, because this was a very serious meltdown on the part of the president."

During the meeting Trump reportedly attacked his former Defence Secretary James Mattis, describing him as "the world’s most overrated general".

Republicans and Democrats in the House joined together to approve a resolution opposing Trump’s decision to withdraw US troops from the region.

The House measure passed 354 to 60 – a rare instance where Republicans on Capitol Hill have decisively broken with the President.

At a press conference earlier in the day Trump said the fighting in Syria "has nothing to do with us" and that the Kurds in the area had not been "angels".

He said he believed his decision to withdraw US troops was "strategically brilliant" because other countries such as Syria and Russia were also opposed to ISIS and would not let the terrorist group regroup.

"I hope President Trump is right in his belief that Turkeys invasion of Syria is of no concern to us, abandoning the Kurds won’t come back to haunt us, ISIS won’t reemerge, and Iran will not fill the vacuum created by this decision," Republican Senator Lindsey Graham wrote on Twitter.

"However I firmly believe that if President Trump continues to make such statements this will be a disaster worse than President Obama’s decision to leave Iraq."