London: A 25-year-old man was charged Saturday with manslaughter and a trafficking conspiracy in connection with the deaths of 39 people whose bodies were found in a refrigerated truck in southeastern England, Essex Police said.

The man, the truck's driver, who was identified Saturday as Maurice Robinson of Northern Ireland, also faces 39 counts of conspiracy to assist unlawful immigration and money laundering when he appears at Chelmsford Magistrates' Court on Monday, Essex Police said in a statement. 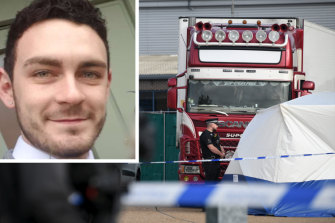 Mo Robinson, has been charged over the deaths of 39 people found in a lorry.Credit:Facebook/Getty Images

Robinson was originally arrested on suspicion of murder after the grisly discovery in Essex, England, this past week spurred an investigation that stretched beyond Britain's borders to Belgium, China, Ireland and Vietnam. The case bears all the markings of a global trafficking operation gone tragically wrong.

The charges were announced Saturday shortly after police in Ireland said they had arrested another man from Northern Ireland at Dublin Port in connection with an unrelated offence. But local news outlets reported he was wanted for questioning in the investigation of the truck deaths.

The man, another truck driver identified as Eamon Harrison, 23, of Mayobridge in County Down, Northern Ireland, was detained on a bench warrant on charges of assault and criminal damage in the Republic of Ireland, according to The Irish Times, which cited information from Detective Patrick Flood of the Garda National Immigration Bureau. Harrison appeared in Dublin District Court on Saturday to face charges.

He was arrested about 1.15pm Saturday on a truck coming off an Irish ferry at Dublin Port, having spent the last three days in France and disposing of a cellphone before travelling to Ireland, according to The Irish Times' court report.

A spokesman for Essex Police would not confirm Harrison's connection to the trafficking investigation, but authorities said in a statement Saturday night, "We are in liaison with the Garda police in relation to an arrest they have made today at Dublin Port."

Essex Police initially announced that the eight women and 31 men found dead in the truck container were Chinese citizens. But since then, community groups in Vietnam have said they believe some may have been from that country.

Police in Britain said the identification of the victims and verification of their nationalities would take some time, but the dearth of information has not stopped some Vietnamese from mourning victims they believe were once part of their community.

Reverend Anthony Dang Huu Nam, a Catholic priest in the remote town of Yen Thanh in Vietnam's northern-central Nghe An province, told Reuters news agency that many residents feared that relatives who had left home to find better lives abroad may be among the dead.

"The whole district is covered in sorrow," Nam was quoted as saying. Prayers for the dead could be heard over loudspeakers throughout the town Saturday, Reuters reported.

Rights activist Hoa Nghiem has said that the family of one Vietnamese woman, Pham Thi Tra My, 26, feared she might have been in the trailer. Vietnam's embassy in London also said it was working with British authorities after receiving requests for help from some Vietnamese families in verifying whether their relatives were among the victims.

Even as Detective Chief Inspector Martin Pasmore told reporters Saturday that police could not definitively confirm the victims' nationalities, the department said it was undertaking "the largest mass fatality victim identification process" in its history in order to put names to those found in the tractor-trailer.

All the bodies were moved from the truck at Tilbury Docks to Broomfield Hospital in Chelmsford for autopsies, police said.

A Vietnamese community group called Viethome said on its Facebook page that it had been in contact with British police to pass on 20 photographs that families had provided to help in the process. But Essex Police did not immediately confirm having received the images.

Three other people have been detained in the investigation: a man and a woman from Warrington, England, both 38, who are also believed to be originally from the Republic of Ireland, along with a 48-year-old man from Northern Ireland, taken at London Stansted Airport. They were arrested this past week on suspicion of conspiracy to traffic people and manslaughter, and remain in custody.

Officials have been trying to piece together a timeline to trace the path of the truck, find out why the 39 ended up in the refrigerated container and determine how they lost their lives.

Authorities said the cab of the truck entered Britain via Holyhead, a port town in Wales, last Sunday, having travelled from Dublin. The trailer arrived in the port of Purfleet, England, early Wednesday from Zeebrugge, Belgium. The cab and trailer left the port shortly after 1.05am, police said.

Someone called authorities to an industrial park in Essex shortly before 1.40am last Wednesday, and an ambulance service discovered the 39 bodies in the trailer.

On Saturday, Belgian news outlets reported that police there were on the trail of the driver who had transported the 39 people on the continental leg of their journey, after obtaining CCTV images of his vehicle from cameras at Zeebrugge.