Washington: At his campaign rallies, and on his Twitter feed, one of Donald Trump’s favourite themes was the need to bring American troops home from overseas.

“I was elected on getting out of these ridiculous endless wars, where our great military functions as a policing operation to the benefit of people who don’t even like the USA,” he tweeted in 2019.

Trump, a foreign policy isolationist by instinct, dramatically scaled back the number of American troops in Afghanistan and signed a peace deal with the Taliban last February. Under that arrangement, all US troops were supposed to withdraw from the country by May. 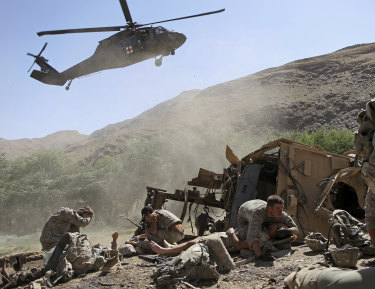 An Army soldier covers an injured comrade as a helicopter lands to evacuate the wounded after their armored vehicle hit an improvised explosive device in the Tangi Valley of Afghanistan’s Wardak Province in 2009.Credit:AP

But Trump’s election defeat meant he would not fulfil his goal to become the leader who ended the longest war in American history.

Instead – if he carries out the plan he outlined in the White House on Thursday (AEDT) – Joe Biden will go down in history as the US president who ended the 20-year War in Afghanistan.

It’s a reminder that, for all their differences in style, there is plenty of continuity between the Biden and Trump administrations on foreign policy. Politics moves in cycles and right now military interventionism is out of fashion in the US. The political calculus is that Americans are weary of overseas entanglements and want their country’s leaders to focus on problems at home. 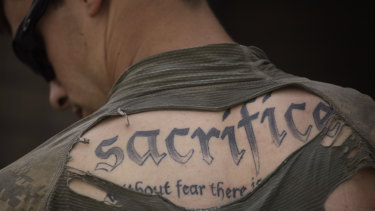 A tattoo on the back of US Army Sergeant James Wilkes seen through his torn shirt in Afghanistan’s Kandahar province in 2010. Credit:AP

“We cannot continue the cycle of extending or expanding our military presence in Afghanistan hoping to create the ideal conditions for our withdrawal, expecting a different result,” Biden said in a speech in the Treaty Room, the same location where George W. Bush announced the beginning of the war in 2001.

“I am now the fourth American president to preside over an American troop presence in Afghanistan. Two Republicans. Two Democrats. I will not pass this responsibility to a fifth.”

Politicians in Washington tend to get pigeon-holed as either foreign policy “hawks” or “doves”. Biden has been both in his long career. He voted to authorise the 2003 War in Iraq, but served as an in-house sceptic of the military as Barack Obama’s vice-president.

Biden strongly opposed Obama’s decision to surge troops into Afghanistan in 2009, and now says it’s time for all the troops to come home. 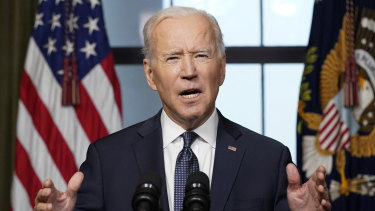 US President Joe Biden announcing the drawdown of troops.Credit:AP

The main difference from his predecessor’s plan is that Biden is delaying the full withdrawal date by four months. Under his plan all US troops will be out of Afghanistan by September 11.

“We went to Afghanistan because of a horrific attack that happened 20 years ago,” Biden said.

“That cannot explain why we should remain there in 2021…War in Afghanistan was never meant to be a multi-generational undertaking.”

He noted that he came to the issue with a first-hand perspective, as the first president in 40 years with a child who served in a war zone.

Biden said America’s reasons for remaining in Afghanistan had become increasingly unclear since the killing of Osama Bin Laden in 2011.

Biden could have stuck to Trump’s timeline on the grounds that he didn’t want to undermine the existing peace deal. 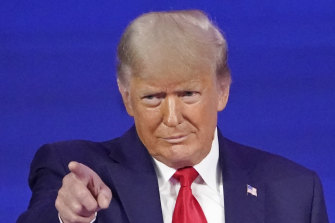 The Taliban has not targeted US troops over the past year, but has made clear that this policy was conditional on America leaving the country by May.

By setting his own date for a full troop withdrawal, Biden owns the issue. He’ll get the credit, or the blame, for what comes next.