Voters go to the polls today, with front-runner Macron holding a narrow lead over the far-Right leader.

However, there were fears last night that public apathy could mean the contest is closer than predicted.

Mr Macron warned supporters at a final rally on Friday night: ‘Hours before the Brexit vote, millions of people asked themselves what was the point of voting… the next day they woke up with a hangover.’

Ms Le Pen’s campaign has been dogged by accusations of racism and ties to the Kremlin, which were exacerbated yesterday as fresh allegations emerged that her party was paying £10 million to a Russian military contractor under US sanctions as settlement of a loan.

Polls predicted a narrow lead for Mr Macron when campaigning ended on Friday, with the incumbent ahead of Le Pen by 56.6 per cent to 43.5 per cent. 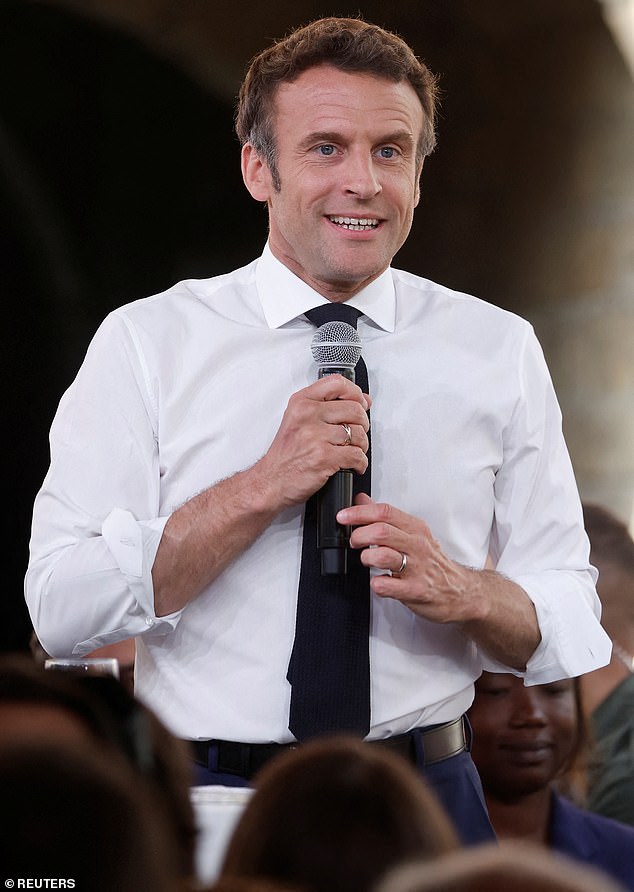 Voters go to the polls in France today, with front-runner Emmanuel Macron (pictured at a rally Friday) holding a narrow lead over the far-Right leader Marine Le Pen 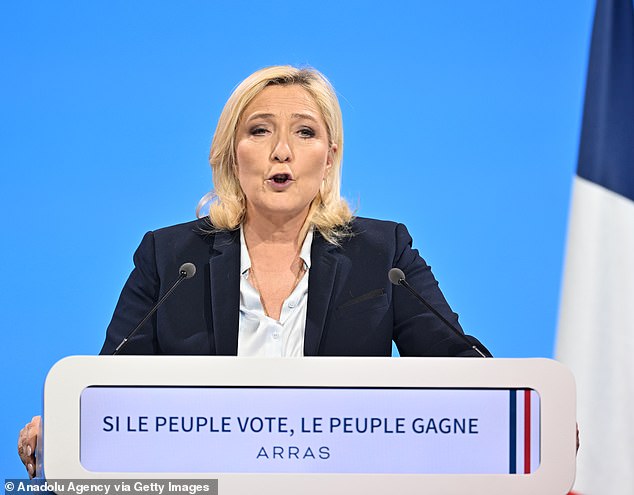 Ms Le Pen’s campaign has been dogged by accusations of racism and ties to the Kremlin (Pictured: Le Pen during a campaign rally on Thursday) 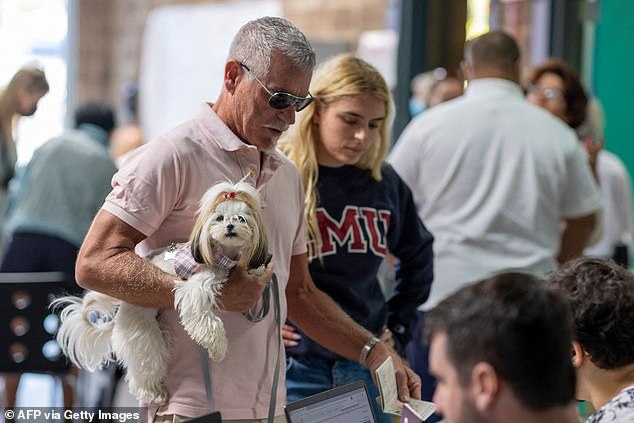 A man carries a dog as he registers to vote in the French presidential runoff election, in Burbank, California on April 23, 2022

The voting began in overseas French territories on Sunday.

The first vote in the election was cast by a 90-year-old man in the tiny island territory of Saint Pierre and Miquelon off the northern coast of Canada.

Polls subsequently opened in France’s islands in the Caribbean and the South American territory of French Guiana and in territories in the Pacific and then Indian Ocean.

A victory over far-right candidate Marine Le Pen in the election battle would make Macron the first French president in 20 years to win a second term.

All opinion polls in recent days converge toward a victory for the 44-year-old pro-European centrist – yet the margin over his nationalist rival appears uncertain, varying from 6 to 15 percentage points, depending on the poll.

Polls also forecast the potential of a record-high number of people who either vote blank or stay at home and don’t vote at all in this second and final round. 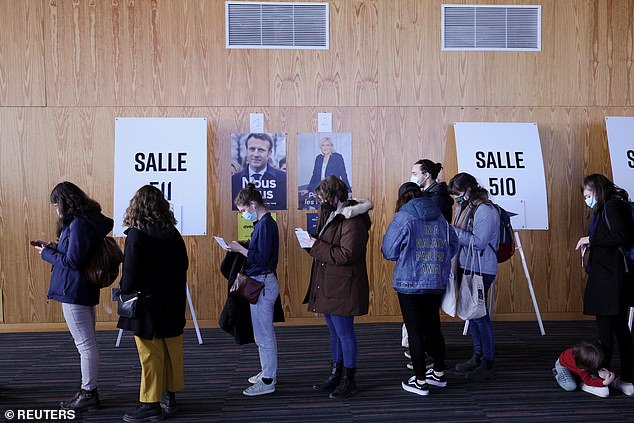 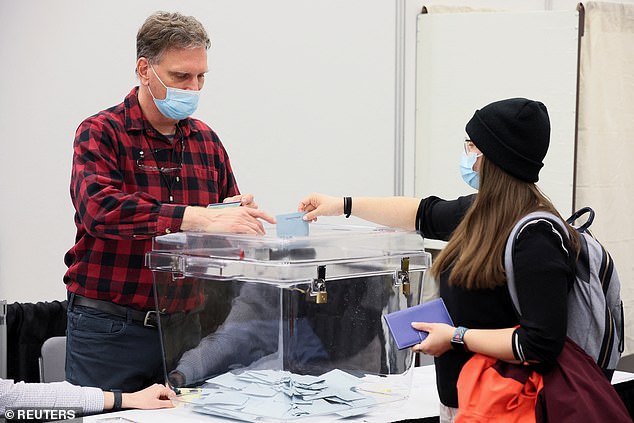 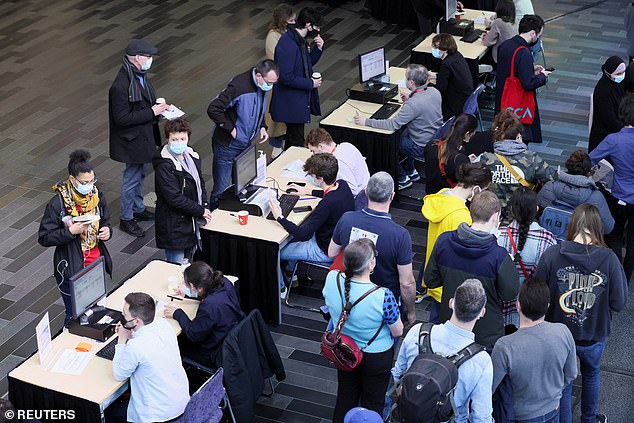 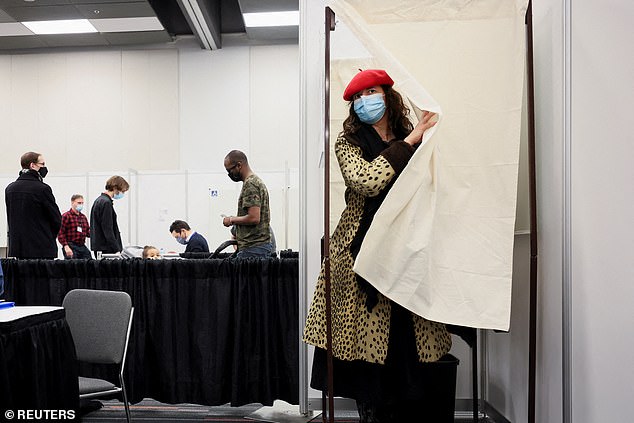 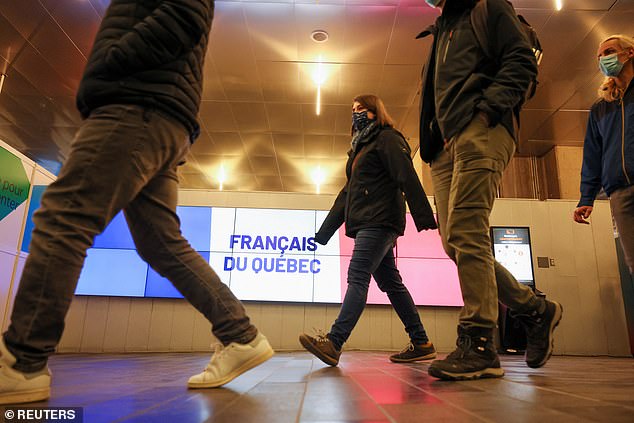 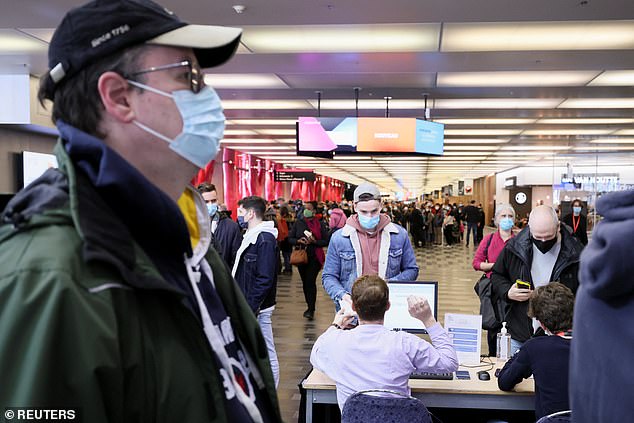 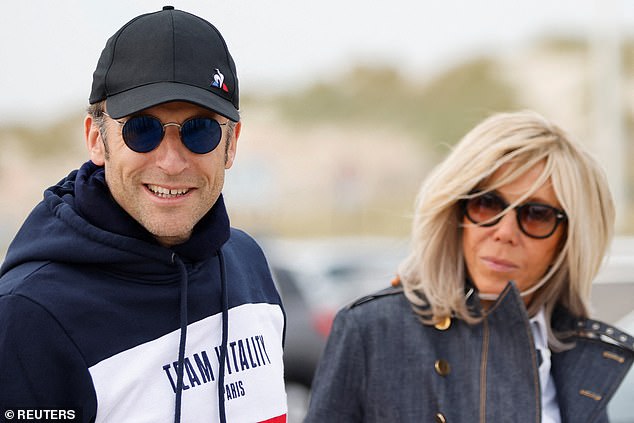 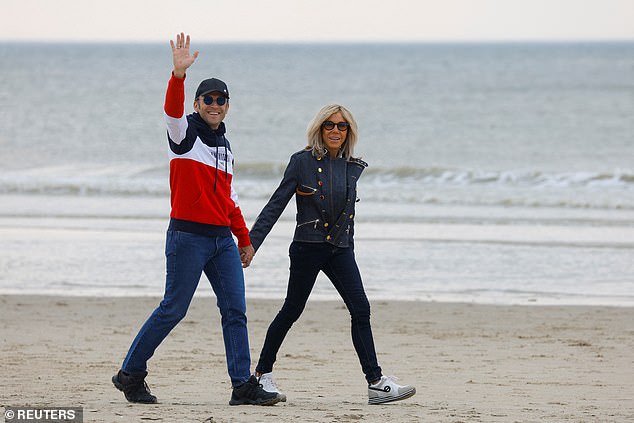 Emmanuel Macron on the beach with his wife Brigitte in Le Touquet-Paris-Plage, on the eve of the second round of the presidential election in France

And, speaking in Figeac, an idyllic medieval village in south-west France, Macron warned that ‘nothing is decided’.

Describing a potential win for Le Pen as a victory for ‘hatred’ and invitation to economic ruin, he also said: ‘Think about what British citizens were saying a few hours before Brexit or (people) in the United States before Trump’s election happened: ‘I’m not going out to vote, what’s the point?’ The next day, they woke up with a hangover.

‘So if you want to avoid the unthinkable…choose for yourself.’

In her final campaign stop in Pas-de-Calais, her heartland, Ms Le Pen also called for supporters to turn out.

She said: ‘Polls aren’t what decide an election.’ 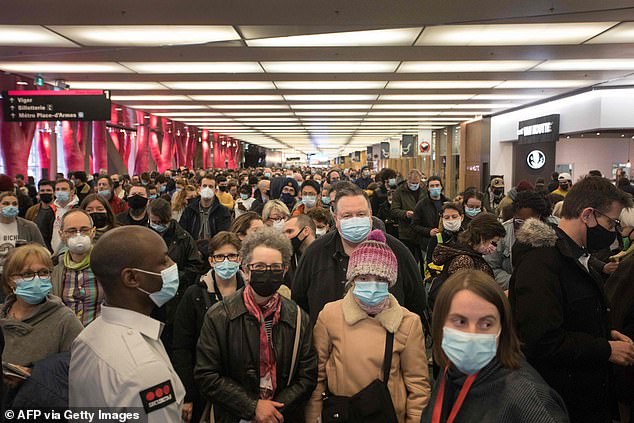 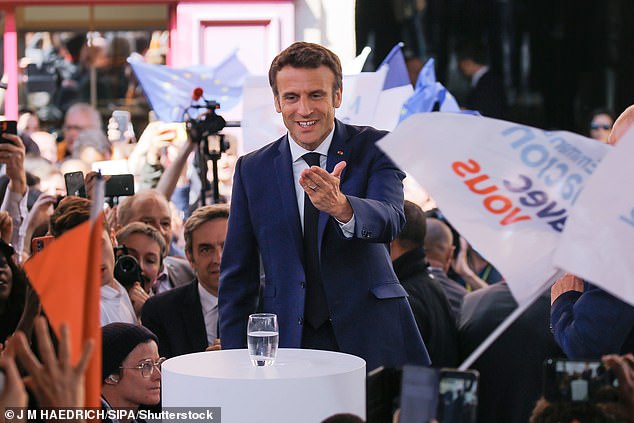 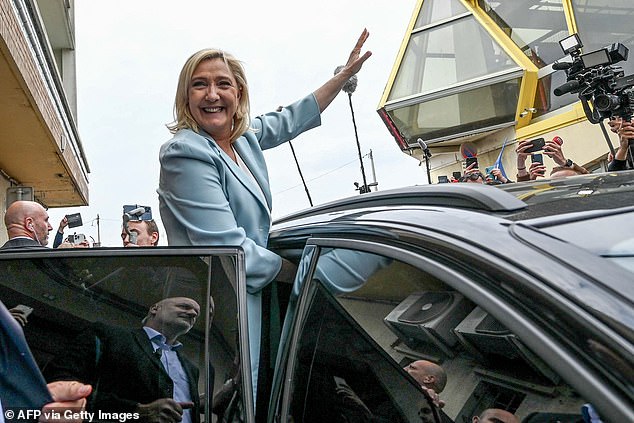 Analysts have also reported that Le Pen could upset the polls amid low voter turnout.

‘It could be bigger than Brexit,’ said Michael Hewson, of UK traders CMC Markets.

Also referring to the surprise election of Donald Trump as president of the US in 2016, Mr Hewson added: ‘It could be bigger than Trump, if Le Pen prevails.’

Strategists at Citi, the U.S. investment bank, suggested tactical voting combined with low turnout could yet mean victory for the far-Right French candidate.

‘Uncertainty stems from the risk of low voter turnout, as leftist voters refuse to give their vote to Macron, even at the risk of handing over to Le Pen,’ reads a research document.

‘Voter turnout is a factor that pollsters find particularly hard to forecast accurately.’

The April 10 first-round vote eliminated 10 other presidential candidates and the victor between Macron and Le Pen will largely depend on what people who backed those losing candidates do on Sunday.

It is complicated to predict what will happen, especially with leftist voters who dislike Macron but do not want to see Le Pen in power either.

A second term for Macron relies in part on their mobilisation, prompting the French leader to issue multiple appeals to leftist voters in recent days.

The two rivals both appeared combative in the final days before Sunday’s election, including clashing Wednesday in a one-on-one televised debate.

Macron argued that the loan Le Pen’s party received in 2014 from a Czech-Russian bank made her unsuitable to deal with Moscow amid its invasion of Ukraine.

He also said her plans to ban Muslim women in France from wearing headscarves in public would trigger ‘civil war’ in the country that has the largest Muslim population in Western Europe.

‘When someone explains to you that Islam equals Islamism equals terrorism equals a problem, that is clearly called the far-right,’ Macron declared Friday on France Inter radio.

Le Pen slumped in the polls after vowing to ban the Muslim headscarf and after Macron’s civil war warning.

During the debate, Le Pen confirmed that she stood by her controversial idea of banning the headscarf, which she called ‘a uniform imposed by Islamists’, but she said she was not ‘fighting against Islam.’

‘I’m telling it in a very clear manner: I think the headscarf is a uniform imposed by Islamists,’ Le Pen said. 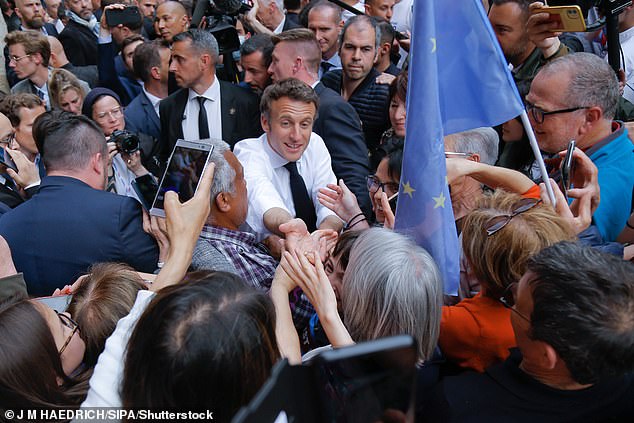 Describing a potential win for Le Pen as a victory for ‘hatred’ and invitation to economic ruin, Macron said: ‘Think about what British citizens were saying a few hours before Brexit or (people) in the United States before Trump’s election happened: ‘I’m not going out to vote, what’s the point?’ The next day, they woke up with a hangover’ 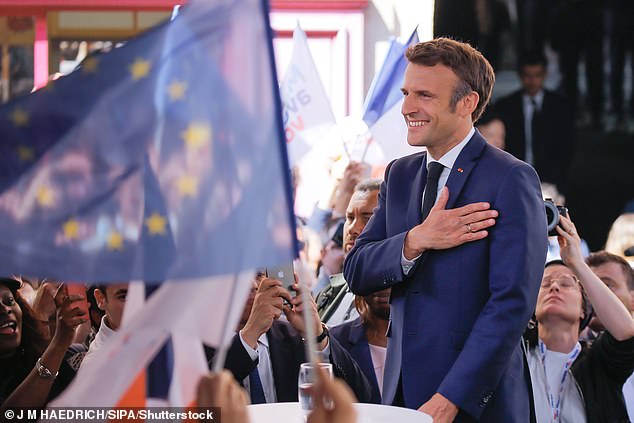 ‘I think a great proportion of young women who are wearing it have no other choice in reality.’

Survey results published hours after the face-off showed Macron on 59 per cent of the vote, and his right-wing right rival on 39 per cent, with 2 per cent abstentions.

A similar result on Sunday in the final round of the 2022 presidential election would see Macron win his second five-year term of office, and suggests a widening in the polls from yesterday when the pair were eight to 12 points apart.

The sitting President has said he would not ban religious clothing, but he has overseen the closure of numerous mosques, schools and Islamic groups, with help from a special team to root out suspected breeding grounds for radicalism.

The Macron government also passed a controversial law last year to fight ‘separatism,’ the word used to describe the mixing of politics with Islam, deemed dangerous to France’s prized value of secularism.

But Le Pen has pledged to take things a step further by placing an outright ban on religious clothing in public – a law she says would be enforced like ‘wearing a seatbelt in a car’.

In his victory speech in 2017, Macron had promised to ‘do everything’ during his five-year term so that the French ‘have no longer any reason to vote for the extremes.’ 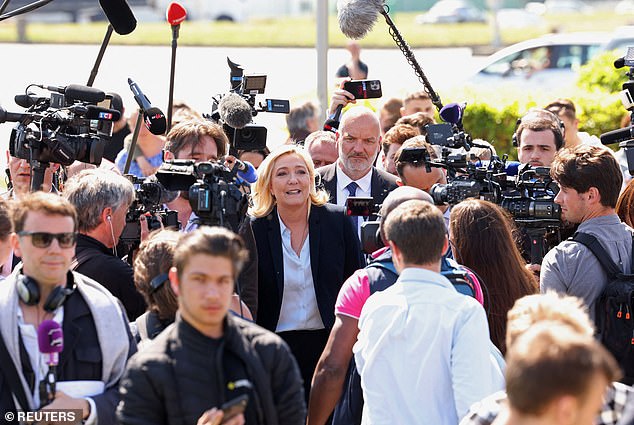 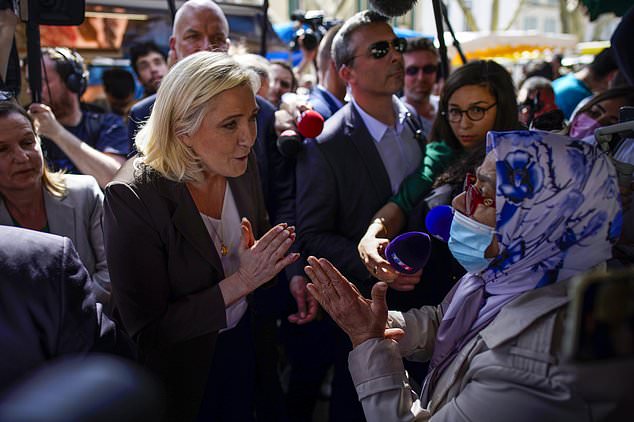 French far-right leader Marine Le Pen, left, talks to a woman in a headscarf as she campaigns in a market in Pertuis, southern France, Friday, April 15, 2022

However, Le Pen has since consolidated her place on France’s political scene, the result of a years-long effort to rebrand herself as less extreme.

Le Pen’s campaign this time has sought to appeal to voters struggling with surging food and energy prices amid the fallout of Russia’s war in Ukraine. The 53-year-old candidate said bringing down the cost of living would be a top priority if she was elected as France’s first woman president.

She criticized Macron’s ‘calamitous’ presidency in her last rally in the northern town of Arras.

‘I’m not even mentioning immigration or security for which, I believe, every French person can only note the failure of the Macron’s policies… his economic record is also catastrophic,’ she declared.

Political analyst Marc Lazar, head of the History Center at Sciences Po, told the AP he thinks that Macron is going to win again. Le Pen ‘has this lack of credibility,’ he said.

But if Macron is re-elected, ‘there is a big problem,’ he added. ‘A great number of the people who are going to vote for Macron, they are not voting for this program, but because they reject Marine Le Pen.’

He said that means Macron will face a ‘big level of mistrust’ in the country.

Macron has vowed to change the French economy to make it more independent while protecting social benefits at the same time. He said he will also keep pushing for a more powerful Europe.

His first term was rocked by the yellow vest protests against social injustice, the COVID-19 pandemic and the war in Ukraine. It notably forced Macron to delay a key pension reform, which he said he would relaunch soon after reelection, to gradually raise France’s minimum retirement age from 62 to 65. He says that’s the only way to keep benefits flowing to retirees.

The French presidential election is also being closely watched abroad.

In an opinion piece Thursday in several European newspapers, the center-left leaders of Germany, Spain and Portugal urged French voters to choose him over his nationalist rival. They raised a warning about ‘populists and the extreme right’ who hold Putin ‘as an ideological and political model, replicating his chauvinist ideas.’