PICTURED: Engaged teenage soldiers, 18 and 19, who died in a crash outside Army barracks on their way to a Halloween party – as parents of girl say ‘we will forever miss our angel’

Tributes have been paid to a teenage couple who died in a crash outside their army barracks while travelling to a Halloween party.

Jack Paolucci, 19, and his fiancée Courtney Jennings, 18, who both served in the British Army, died when a Renault Clio they were travelling in veered off the road near Tidworth last Friday night.

The pair were both based at the military barracks in Tidworth, Wiltshire, and had spent weeks preparing their Halloween outfits they were wearing at the time of the crash.

Today, the parents of Ms Jennings paid tribute to their ‘beautiful’ and ‘selfless’ daughter and said ‘we will forever miss our angel.’ 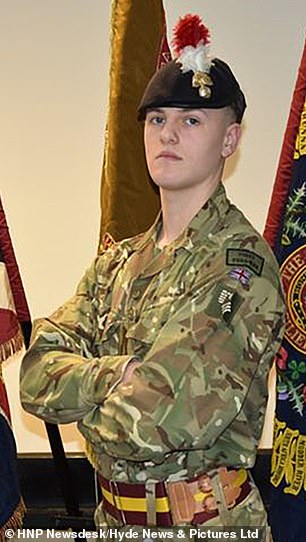 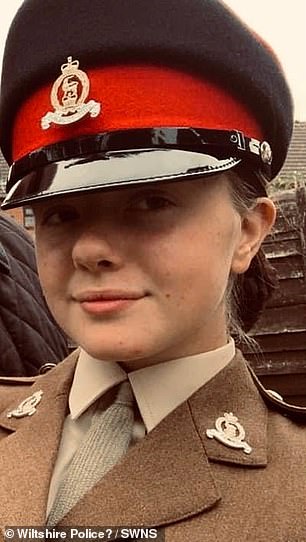 Jack Paolucci (left), 19, and Courtney Jennings (right), 18, who both served in the British Army, died when a car they were travelling in veered off the road near Tidworth

Ms Jennings graduated in September 2020 and was part of the Royal Electrical and Mechanical Engineers (REME) corps.

Her family – from Staffordshire – say they have been left heartbroken by her loss, describing her as having an infectious laugh and had made everyone proud by following her aspirations of joining the army.

Two other passengers remain in hospital, with one, a 27-year-old man, in a stable but critical condition.

In a statement released by Wiltshire Police,  the family of Ms Jennings said: ‘Courtney lost her life far too soon.

‘No parent should ever find themselves in this situation, but through all our heartache we have the memories of our daughter that will forever keep our hearts bright.

‘Courtney was 14 when she decided she was going to join the Army, and through her own aspersion and determination she succeeded and left home at 16 to join Harrogate Foundation college to achieve her dreams.

‘She made herself proud, and all around her as proud of her as they could be. She has the brightest smile and infectious laugh.

‘Once she started you could not help joining in. She was selfless with the kindest heart and was extremely close to her family. She always showed her love to everyone. 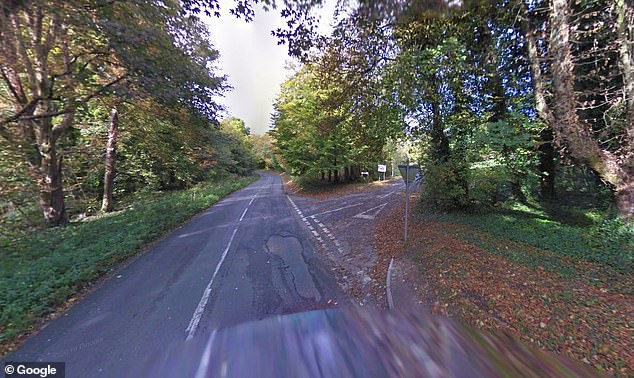 The couple died when the Renault Clio they were travelling in veered off the road near Tidworth last Friday night. Pictured: GV of the road

‘Courtney was determined and sometimes stubborn, but always saw the bigger picture. When she met Jack she was the happiest that we’d ever seen her. Jack truly looked after her, and that was reassuring to us as parents.

‘Speaking to her on FaceTime on Friday she was beaming about them going out to a nightclub together to celebrate Halloween. Her costume took weeks to prepare.

‘Unfortunately, she never made it and that breaks our hearts. We were really looking forward to her sending us pictures of the night.

‘She sent us pictures before they left and she looked so beautiful. We will forever hold that in our thoughts. We cannot believe that we will never get to hear her voice or hug her again.

‘It is absolutely tragic, and we will forever miss our angel.’

After the crash, two other men, aged 19 and 27, were taken to the regional major trauma centre at Southmead Hospital in Bristol with life-threatening injuries.

One was taken there via air ambulance.

A 29-year-old man suffered serious injuries, and the other occupant of the vehicle, a 20-year-old man, suffered minor injuries.

A spokesperson for Wiltshire Police said: ‘At approximately 10pm we responded to the road traffic collision involving a Renault Clio which had struck a tree after leaving the road.’

The circumstances of the collision remain part of an ongoing investigation and anyone with any information is asked to call 101 and quote reference number 54210105760.