Zurich: Swiss voters' concerns about climate change look set to give the environmentalist Greens strong gains in a parliamentary election that could dilute the centre-right's grip on power.

A solid showing by the Greens in Sunday's poll could vault them and allies into the mix for a seat in the grand coalition that has governed the conservative nation for decades. Changing just one member of the seven-seat cabinet would be a political sensation. 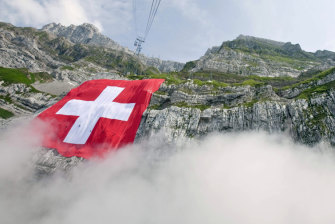 A Sotomo poll this month for broadcaster SRF showed the right-wing Swiss People's Party (SVP), which won record seats in 2015 amid Europe's refugee crisis, will dip 2.1 points to 27.3 per cent while the Green Party's share will rise more than 3 points to 10.7 per cent of the vote.

The smaller, more centrist Green Liberal Party (GLP) is also expected to advance, bringing their combined strength to a theoretical 18 per cent.

That would place them collectively third behind the SVP and the centre-left Socialists (SP), ahead of the centre-right Liberals (FDP), who all have two of the seats on the Federal Council that is Switzerland's government.

Cabinet seats have been divvied up among the SVP, SP, FDP and Christian People's Party (CVP) in nearly the same way since 1959.

In December, the two parliamentary chambers will elect the government, but in the past it has taken more than one national election cycle for that selection procedure to change the cabinet lineup to more closely reflect the results.

The Greens' success could hit all major parties, including the SVP, whose President Albert Roesti has called climate change a "eco-socialist scam against the middle class".

Analysts caution against expecting too radical a shift after a campaign that was light on typical hot button issues such as migration and Swiss ties with the European Union.

Green parties do not have a monopoly on ecological issues and many voters in the rural SVP heartland are loyal.

GLP founder Martin Baeumle told the Schweiz am Wochenende paper it was an "illusion" to think the Greens and GLP could mount a joint effort to seize a cabinet set. He noted differences in the two parties' economic and social policy, scant representation in the upper house of parliament, and the difficulty of ejecting a sitting member of government.

Polls close at midday (8pm AEST), with initial projections, including from the many postal votes, due soon thereafter.