A pilot who died in a plane crash that killed his four passengers near Essendon Airport in 2017 had failed an in-air competency test before the fatal flight, after being involved in a near-miss while carrying passengers over Mount Hotham two years before. 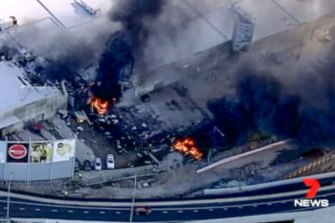 The aircraft crashed into the DFO shopping centre seconds after taking off from Essendon Airport.Credit:Seven

A coronial inquest into the Essendon Airport deaths heard on Tuesday that Mr Quartermain appeared stressed during the test in October 2015, and mixed up mechanical instruments during an in-air engine failure simulation, causing the CASA operator to terminate the assessment.

The inquest heard the 63-year-old then failed to undertake a six-month proficiency check. A series of non-compliance notices were issued over the following year after it was determined Mr Quartermain lacked some knowledge.

Mr Nishizawa told the inquest that after that initial test, he made a suggestion that Mr Quartermain undertake remedial training to “address areas of his shortfalling” before a future proficiency check. But he told the coroner CASA had no power to mandate that training.

He later passed Mr Quartermain. He told the Coroners Court everyone has their “good and bad” days. 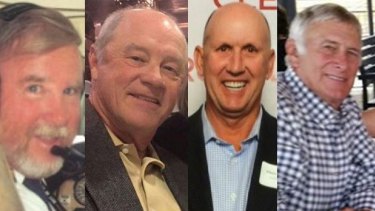 When asked whether CASA had the power to suspend, vary or cancel the pilot’s licence after such a “major failure” during the instrument-review flight, Mr Nishizawa said he believed Mr Quartermain was still in shock from the Mount Hotham incident a month earlier and any changes to his licence would have been “premature”.

Less than 18 months later, on February 21, 2017, Mr Quartermain was at the helm of a Beechcraft B200 King Air plane, bound for Tasmania, when it crashed into the DFO shopping centre seconds after taking off from Essendon Airport.

Mr Quartermain was killed in the crash, along with American tourists Greg De Haven, Glenn Garland, Russell Munsch and John Washburn, who were flying to King Island to play golf.

A subsequent Australian Transport Safety Bureau review found the aircraft’s rudder trim was in a full nose-left position during take-off.

The final aviation safety report into the 2017 crash is expected to be publicly examined for the first time as part of the inquest. How the rudder came to be in that position is also expected to be explored.

On Tuesday, the inquest heard Mr Quartermain was stressed at the time of his 2015 in-air instrument-proficiency check because he was facing difficulty ensuring the continued operation of the B200 aircraft after the owner allegedly lost interest in keeping it flying under his certificate.

The inquest continues on Wednesday.