Barcelona closes its bars, schools close across Europe and hospitals approach maximum capacity as the continent braces for covid amid nightmare scenario of a resurgence before winter

Catalonia shut down its bars and restaurants today while schools are closing again around Europe amid tougher restrictions across the continent as leaders face their nightmare scenario of a Covid-19 resurgence on the eve of winter.

The Spanish region centred on Barcelona has closed bars for 15 days in a ‘painful but necessary’ measure after adding nearly 11,000 cases in the space of a week.

With social life shutting down again across Europe, some governments have been forced to go further with Czech schools going back to distance learning and hospitals cancelling surgeries while Moscow has also sent pupils home.

Belgium has warned that intensive care units will hit capacity by mid-November while Germany saw another alarming spike in cases today and France is expected to unveil new measures later.

Scientists warn that the spread of winter flu and the largely indoor life of the European winter could make the virus even more dangerous in the coming months because hospitals will be more stretched and the disease can spread more easily. 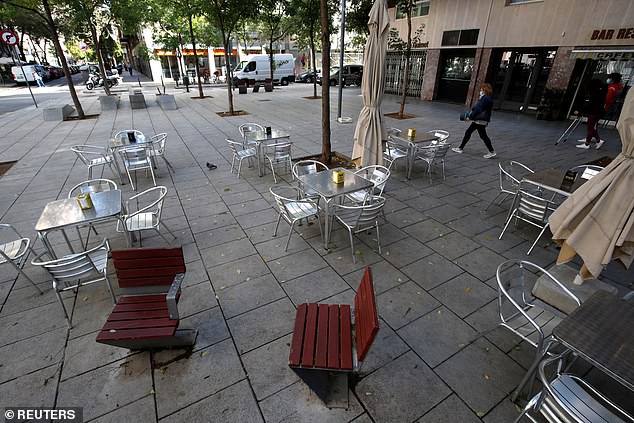 SPAIN: The empty terrace of a restaurant in Barcelona today as Catalonia shut down bars and restaurants for 15 days to slow rising infections 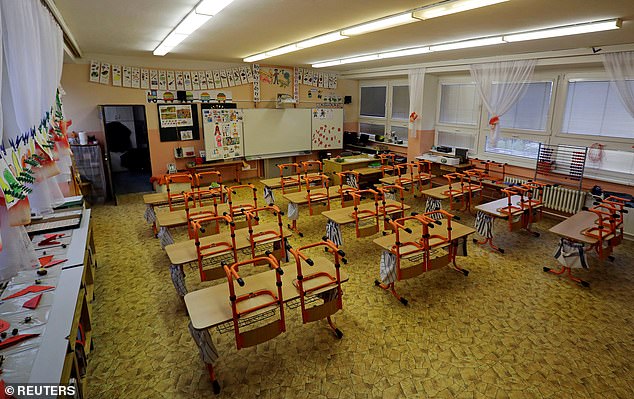 CZECH REPUBLIC: An empty classroom in Prague where the government has sent children back to distance learning to stem Europe’s worst infection rate 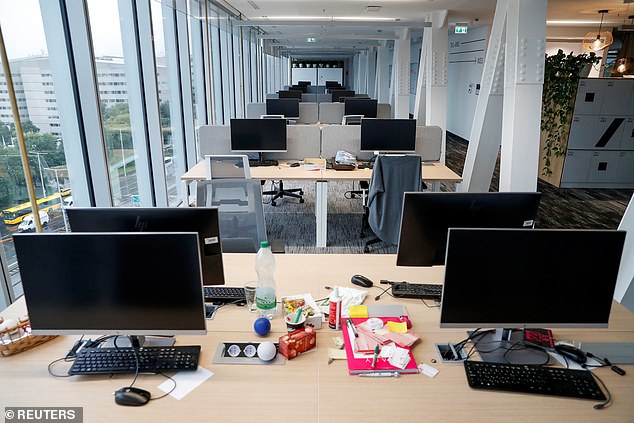 HUNGARY: An empty office at Magyar Telekom HQ as European governments face pressure to shut down economic as well as social life in response to rising cases 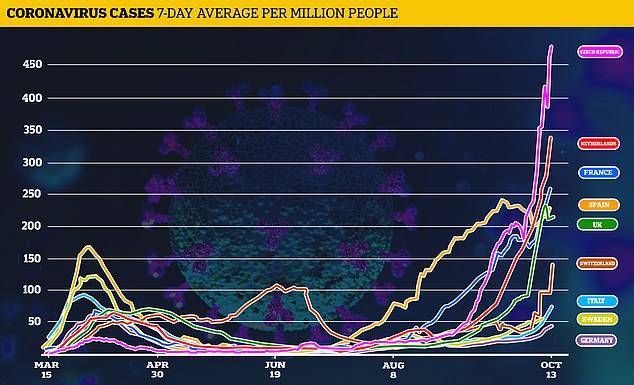 The infection rate per million people among a selection of European nations, with the Netherlands and Czech Republic now among the hardest-hit on the continent 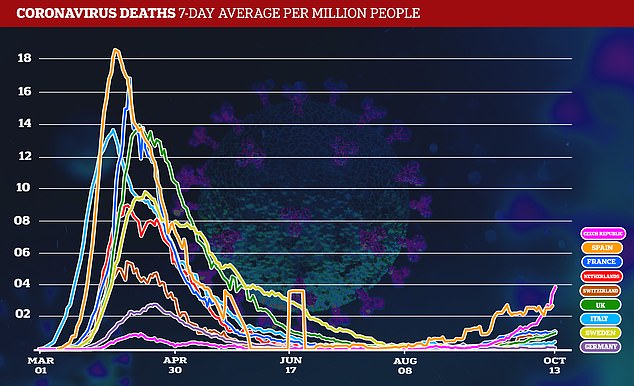 A graph showing the death rate per million people among the same group of nations reveals that fatalities are well below their first-wave peak, but are starting to increase, meaning the virus is circulating more widely than it did during the summer

Most European nations eased lockdowns over the summer to start reviving economies heading for unprecedented downturns from the pandemic’s first wave.

But the return of normal activity – from packed restaurants to new university terms – has fuelled a sharply-rising spike in cases all over the continent.

Bars and pubs were among the first to shut or face earlier closing in the new lockdowns, but surging infection rates are also testing governments’ resolve to keep schools open and non-Covid medical care going.

The Czech Republic, which has Europe’s worst rate per capita, has shifted schools to distance learning and hospitals started cutting non-urgent medical procedures to free up beds. Bars, restaurants and clubs have shut.

‘Sometimes we are at the edge of crying, that happens quite often now,’ said Lenka Krejcova, a head nurse at Slany hospital northwest of Prague.

In an echo of the first wave, builders have been rushing through the hospital’s corridors to turn a general ward into a Covid-19 department.

Poland’s ruling nationalists have prided themselves on acting swiftly and containing the pandemic in the spring, but the opposition and doctors have accused the cabinet of not preparing the health system for a second wave.

‘I don’t have any good information. We are on the brink of disaster,’ Polish immunologist Pawel Grzesiowski told private radio RMF.

He said Poland should be doing more testing, closing schools and supporting doctors in their fight against the pandemic.

Moscow authorities said on Wednesday they would introduce online learning for many students starting on Monday, while Northern Ireland announced a two-week schools closure.

Russia, where cases had been gradually coming down for months, has seen cases lurch upwards again in recent weeks and today piled up more than 14,000 in 24 hours for the first time.

Unlike in Western Europe, Russia’s daily death figures are higher than in the first wave, with average fatalities approaching 200 per day. 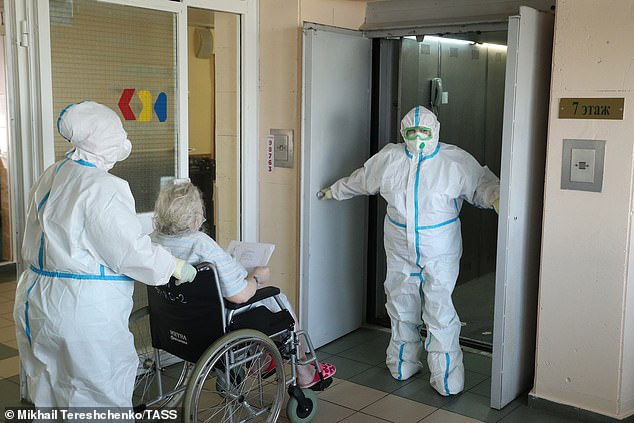 RUSSIA: Medical workers wearing full protective suits attend to a Covid patient at a clinical research centre in Moscow, where cases have been rising sharply again 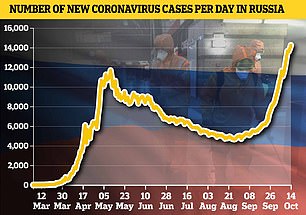 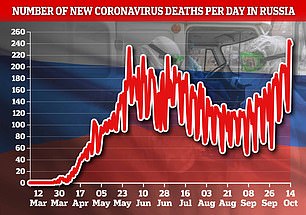 RUSSIA: Cases (left) rose to an all-time high of 14,231 today while deaths (right) have also risen above their spring and summer peak, in contrast to most of Western Europe 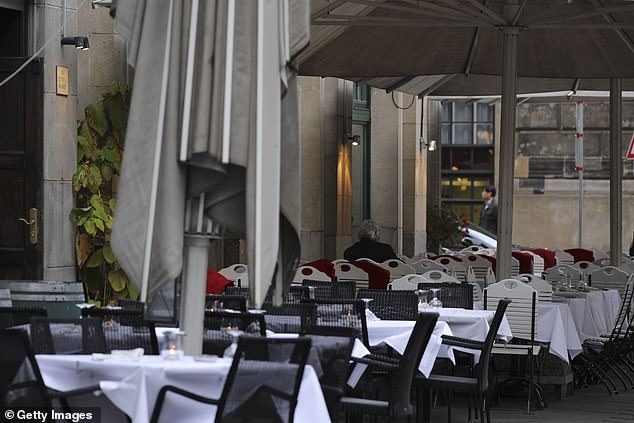 GERMANY: Empty tables outside a restaurant in Berlin, one of the cities which last week agreed new restrictions with Angela Merkel 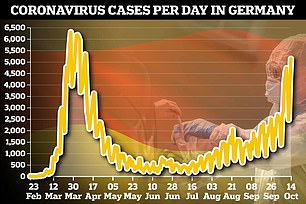 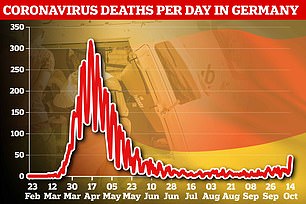 GERMANY: Cases have risen sharply while deaths spiked today in a country which has so far managed to keep its death rate relatively low

The larger economies of Germany, Britain and France have so far resisted pressure to close schools, a move that caused hardship during the spring lockdowns.

European daily infections have been running at an average of almost 100,000 a day, forcing governments to introduce a range of tightening restrictions.

‘It’s a mess, it’s a mess, my son, what can I tell you? We really don’t know how we are going to end up,’ said an Italian pensioner in Rome.

Italy, which suffered Europe’s first major outbreak in February and March, has seen average daily cases soar to nearly 5,000, with deaths also on the increase.

The Netherlands returned to ‘partial lockdown’ on Wednesday, closing bars and restaurants, but kept schools open.

In Germany, politicians are debating whether to extend the Christmas-New Year break to stop contagion among children spreading to the wider community.

However, critics say there is no evidence that schools have been infection hot spots.

According to a draft policy paper, chancellor Angela Merkel wants measures toughened up including requiring masks in more places.

Proposals to be discussed with regional premiers would see restrictions kick in once an area records 35 infections per 100,000 people in a week, instead of 50.

Merkel has in recent days repeatedly voiced alarm about the contagion, urging the country not to squander its early success in keeping numbers manageable.

She has said that keeping schools and the economy open is her priority, but infections continued their rise today with more than 5,000 cases in 24 hours.

The draft document asks citizens to ‘critically weigh up in each case, whether, how and in what extent private parties are necessary and justifiable’.

It also warned that yet further restrictions could be imposed if the upwards trajectory of new infections is maintained.

Lothar Wieler, the head of Germany’s disease control agency RKI, meanwhile urged vulnerable groups to get their seasonal flu shots this year to avoid overwhelming the health system with both flu and Covid-19 illnesses.

‘We’re in a situation where I think we can still flatten the exponential growth but for that we all need to make an effort,’ he said. 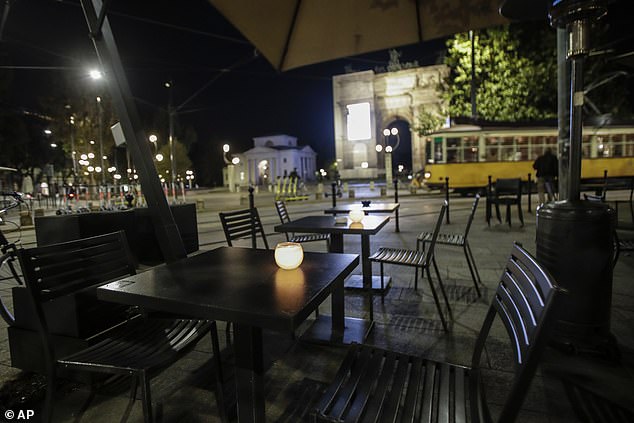 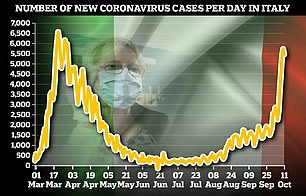 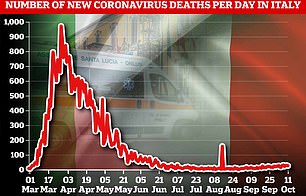 ITALY: The Mediterranean country has seen a sharp rise in coronavirus infections in recent days, though deaths have shown only a slight increase 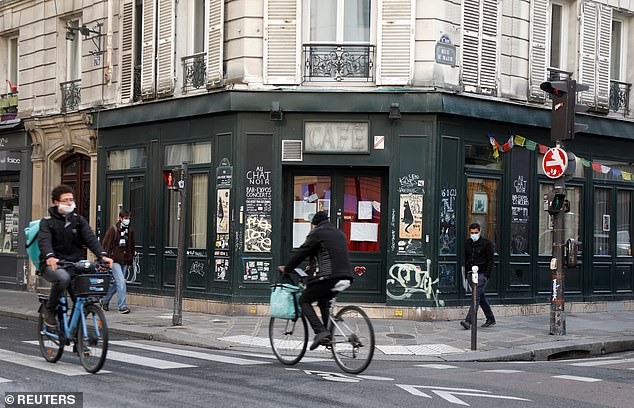 FRANCE: Cyclists ride past the Au Chat Noir bar in Paris which has been closed as part of stricter restrictions due to the coronavirus in Paris 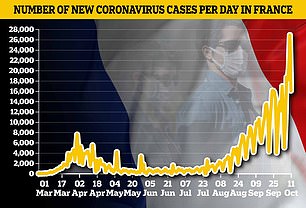 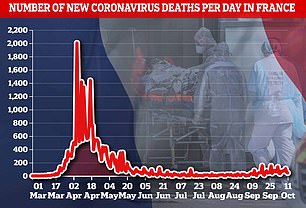 FRANCE: Has placed the cities of Toulouse and Montpellier under Covid measures while warning that full-scale lockdowns of the kind seen earlier in the year may follow, after cases spiked (left). Deaths have begun rising (right), but are nowhere near the peak 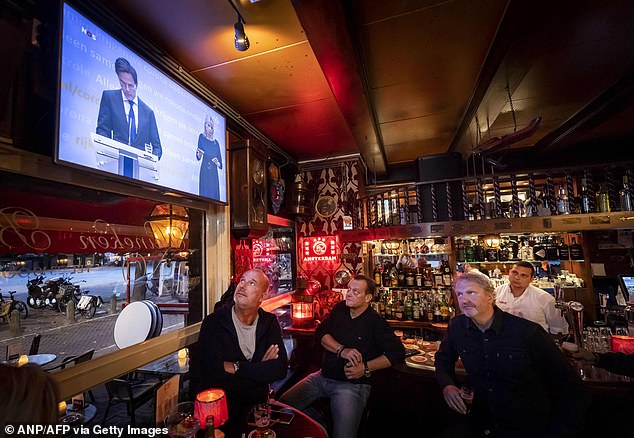 NETHERLANDS: Men in a in a bar listen prime minister Mark Rutte announce a month-long national shutdown starting on Wednesday that will see all bars and restaurants closed 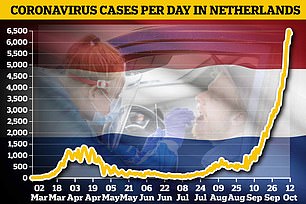 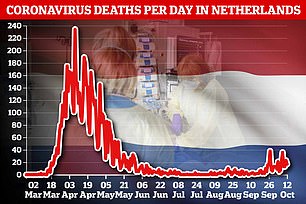 HOLLAND: A huge spike in Dutch virus cases has catapulted the Netherlands into the world’s top 10 countries by infection rate, with ministers struggling to get a grip on the outbreak

French president Emmanuel Macron is expected to unveil further restrictions on Wednesday, with reports that city curfews are under consideration.

Nearly 9,000 people are now in French hospitals with Covid-19, the highest level since late June, with more than 1,000 taken to hospital on Tuesday alone.

While France has ramped up intensive care capacity since the first wave, the number of people needing it has also risen steadily to its highest level since May.

British PM Boris Johnson is facing opposition calls to impose another national lockdown in England, but has so far resisted.

Hospital admissions, however, are climbing and field hospitals which were first set up in the spring are once more being readied.

In Spain, the Catalonia bar and restaurant closure will come into force on Thursday night and remain in place for an initial 15 days.

Nationwide, cases are approaching 900,000 and the death toll has risen by nearly 1,600 in the last two weeks.

In Belgium, with Europe’s second worst infection rate per capita, hospitals now have to reserve a quarter of their beds for Covid-19 patients.

‘We can’t see the end of the tunnel today,’ Renaud Mazy, the managing director of the University Clinics of Saint-Luc in Brussels, told Belgian radio La Premiere.

All virus indicators have deteriorated in recent weeks as the new surge in infections is also being reflected in rising hospital admissions and deaths.

There were 1,621 Covid-19 patients hospitalized in Belgian hospitals as of Wednesday, 281 of them in intensive care, while 33 deaths were recorded,

‘We will reach our maximum capacity of 2,000 beds by mid-November in ICUs if this kind of increase continues,’ said crisis center spokesman Yves Van Laethem said. ‘We absolutely need to avoid this scenario.’

Van Laethem said 152 new patients were admitted every day in Belgian hospitals over the past week, up 80 per cent.

Belgium last week introduced a series of measures that include local curfews, closing bars in Brussels for at least a month and limiting indoor sports activities.

Van Laethem said the country is currently the second-worst in Europe in terms of new coronavirus infections, behind the Czech Republic.