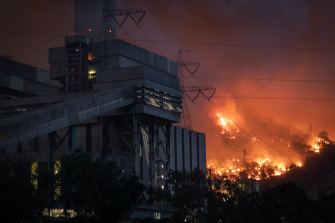 Fires burn at the back of a thermal power plant in Turkey, where the disaster has also become a political issue. President Erdogan accused opposition party members of a “terror of lies” for criticising the lack of aerial firefighting.Credit:Getty

Scorching heat, low humidity and strong winds have fed fires in Turkey and neighbouring Greece. In the last two weeks, fires in Turkey have burnt more than three times the area affected in an average year, as a European fire agency said, and Greeks have been forced to evacuate beaches to avoid the advancing flames. Last week fires tore through Italy and the Mediterranean island of Sardinia, creating scenes of glowing red night skies.

Climate scientists say this year’s onslaught is hitting harder and in places that have been spared global warming’s wrath in the past. Wealthy countries such as the US, Canada and Belgium are joining poorer and more vulnerable nations on a growing list of extreme weather events that scientists say have some connection to human-caused climate change.

The vulnerability is on full display in Turkey and Greece this week – as evident in the photos. 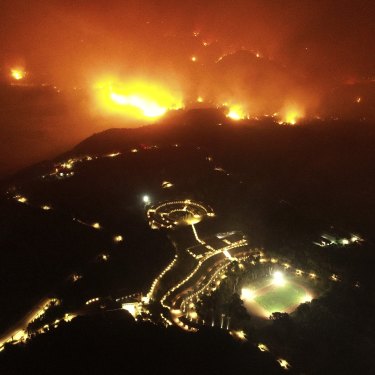 A wildfire approaches the Olympic Academy.Credit:AP

Greek scientists said the total destruction in just three days this month in Greece exceeded 50 per cent of the average area burnt in the country in previous years. An Athens Observatory report said an estimated 6000 hectares went up in smoke in the wildfires between Sunday-Wednesday — compared to 10,400 hectares in the whole of last year. 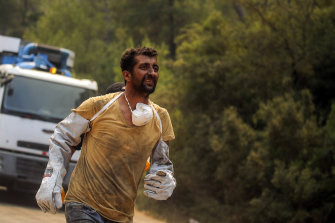 Turkish officials say 167 fires had been brought under control and 16 continued in five provinces. Thousands of firefighters and civilians were working to douse the flames. 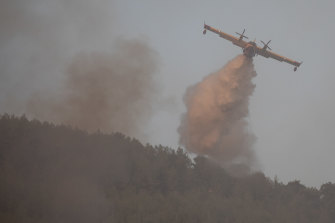 Firefighting planes from Spain and Croatia joined teams from Russia, Iran, Ukraine and Azerbaijan this week to battle blazes in Turkey after the country requested European support. 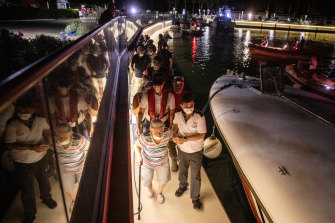 People are evacuated in Oren, Turkey.Credit:Getty

The fires have become a political issue in Turkey where President Recep Tayyip Erdogan accused opposition party members of a “terror of lies” for criticising the lack of aerial firefighting capabilities. 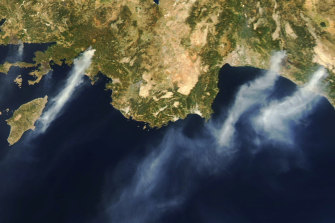 Visible from space: wildfires burn near the southern coast of Turkey. Credit:NASA

“It is not only a poor country problem, it’s now very obviously a rich country problem,” said Debby Guha-Sapir, from the Centre for Research on the Epidemiology of Disasters at Catholic University of Louvain in Belgium said of climate extremes. “They (the rich) are getting whacked.” 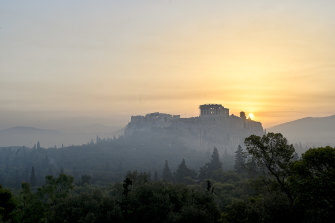 The Parthenon on the Acropolis in Athens.Credit:Getty Images

Greek firefighters pumped water from a swimming pool to douse the flames, and water-dropping buckets were attached to military helicopters. Authorities said more than 100 homes and businesses in Athens had been seriously damaged or destroyed, and more than 500 people were put up for the night in hotels. 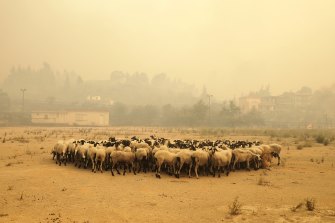 Sheep gather for cover during a wildfire on the Greek island of Evia.Credit:AP

Fire sent clouds of smoke over the Greek capital. It also raged close to a large forested estate and palace that once belonged to Greece’s royal family and is now a public park. 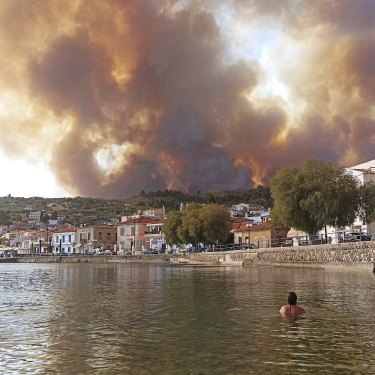 Seen from Limni on the Greek island of Evia.Credit:AP

Temperatures in Greece reached 45 degrees Celsius on Wednesday, in what authorities described as the worst heat wave since 1987. The worst heatwave in decades strained the national power supply as it worsened the wildfires. 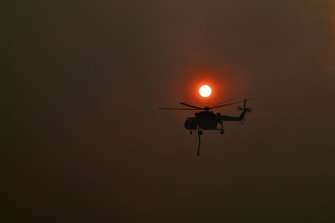 An helicopter over Olympia. Credit:AP

The causes of the Greek wildfires were unclear, but authorities say human error and carelessness are most frequently to blame. 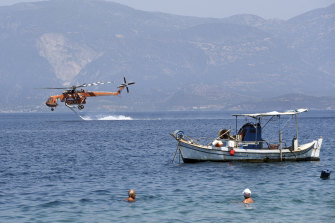 A helicopter fills up with water from the sea. Credit:AP

Outside Athens, low-flying helicopters and planes dumped water on charred forests, where more than 500 firefighters had battled through the night to contain the blaze.