Father, 43 and son, 20, are jailing for lying about who was driving when tragic crash killed their mother on way home from pub

A father and son have been jailed for lying about who was driving when a fatal crash killed their wife and mother.

Gary Botfield allowed his 20-year-old son Lewis to drive back from a pub on Dartmoor through pouring rain at 11.40 pm in a high-powered Mitsubishi Evolution 4 rally car.

Mrs Natasha Botfield was a back-seat passenger and she suffered fatal head and neck injuries when Lewis lost control on a country lane at Spitchwick Common, near Buckfastleigh and crashed into a hedge.

He was a learner driver and was not insured on the car that had no learner plates so his father told police he had been driving.

Both men continued lying to police and their own family while their wife and mother was in intensive care for five days at Derriford Hospital in Plymouth. 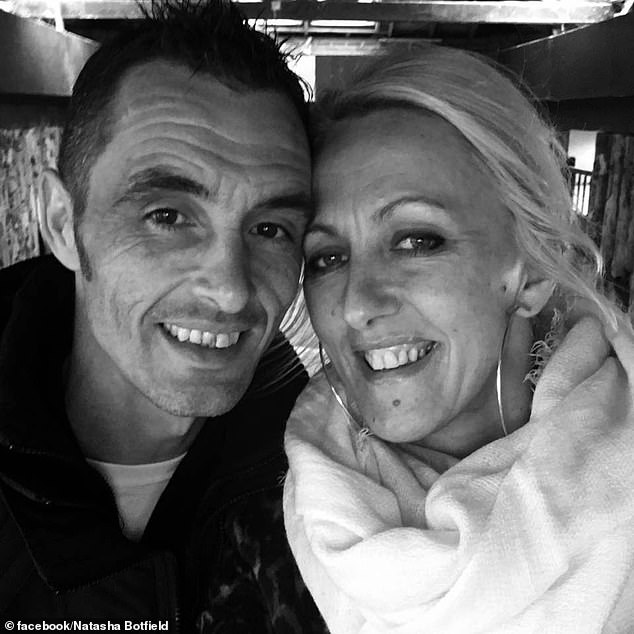 Mrs Natasha Botfield (woman pictured) was in the back of the car when her son lost control and she suffered fatal injuries. Man pictured: Her husband, Gary Botfield, who told police he had been driving

They lied to police in interviews after she died and replied no comment when they were interviewed again after a DNA test found Lewis’s saliva on the driver’s airbag.

The lies meant that Lewis was not breathalysed or screened for drugs on the night of the crash but his father was under the drink drive limit.

Mrs Botfield’s father and sister, who knew her as Tasha, wrote heart-rendering victim impact statements revealing how their devastating grief had been made worse by the charade.

Her sister Kelly was so disgusted at their behaviour that she refused to attend her sister’s funeral, which was delayed by more than a year by the police investigation.

They were both jailed for eight months and Lewis was banned from driving for 18 months by Judge Timothy Rose at Exeter Crown Court.

He told them: ‘I have to bear in mind the seriousness of what happened and the appalling outcome that you were covering up with your lies.

‘How on earth you, Gary Botfield, allowed your son to get into the car and drive that night is something I do not have an answer to. It is beyond belief.. Why Lewis decided to do so is also beyond belief.

‘The circumstances that you covered up should never have happened in the first place and inevitably played a part in the death of Natasha. You are not being punished in relation to any criminality related to her death.

‘Even in the days leading up to her death and you knew events had taken a dramatic and appalling turn for the worse, you did not correct the situation. You maintained your lies even when you knew of the death of your wife and your mother.

‘It is also relevant to reflect on the misery, harm and suffering of Natasha’s family which you added to by the way you continued to deal with them and the police. The victim impact statements make it clear it made things even more unbearable.

‘These lies may have started on the spur of the moment but they were magnified by every day that they continued. It is a particularly despicable feature, bearing in mind the loss of a wife and a mother, that you were still not prepared to come forward and tell the truth.’

Miss Mary McCarthy, prosecuting, said the family had spent the evening at a pub at Postbridge on March 6, 2019 and were turning home on a country lane on Dartmoor when the high-powered Mitsubishi crashed at around 11.55 pm.

It went up a bank and crashed and back seat passenger Mrs Botfield suffered fatal injuries despite wearing a seat belt.Gary told police he was the driver and was tested for drugs and alcohol while they were at Derriford Hospital.

He gave a detailed account in a police interview on March 21, ten days after his wife’s death and the pair only admitted what they had done on May 28, eight weeks after DNA tests showed Lewis was the driver.

Impact statements from Tasha’s sister Kelly and father David Gagg said they were heartbroken by her death and blamed the decision to allow an unqualified driver to use a powerful rally car in heavy rain.

Tasha’s father wrote: ‘When I was told she was going to die, it was the most heartbreaking news. I cannot contemplate life without my darling daughter. It was horrendous. They showed no sign of regret or sorrow and it brought more hurt to the situation. To my mind they were responsible for killing my daughter.’

Kelly said: ‘I did not go to the funeral because of the lies and disregard they showed towards my sister. I blame them both for her loss.’

Tasha’s older son Jordan flew over from his home in America to be at her bedside when she died.

Mr Barry White, for Gary Botfield, said has been devastated by the tragic loss of his wife, who had been his partner for 22years. He has been unable to work since and is living through the generosity of his family.

He said Botfield has no previous convictions and was motivated by a misplaced but natural desire of a father to protect his son.

Mr Lee Bremridge, for Lewis, said his grief and sense of guilt are immeasurable. He is currently acting as carer for his elderly uncle and want to train as a carer so he can follow the same profession as his mother.

He had not intended to drive that night but had fetched something from the car earlier in the evening and got into the driver’s door because the keys were in his pocket.