Female Roma gipsy is convicted of kidnapping British waitress, 22, who was stabbed, stripped naked and had her hair cut in a ‘ritual shaming’ after being accused of having an affair with a clan member in Portugal

A Roma gipsy has been convicted of kidnapping a British bar worker and stripping her naked before stabbing her and hacking off her hair in a ‘ritual shaming’.

Eliana Isabel Almeida Carvalho, 24, was sentenced to six and a half years in jail in the Algarve in Portugal, where she was tried for abducting and assaulting Leighanne Rumney, 22, from South Shields.

The attack on Ms Rumney took place in a Portuguese forest in May 2015 after Carvalho wrongly believed that the bar worker was having an affair with her partner.

Ms Rumney was stabbed and had her long blonde hair chopped off before fleeing with blood pouring from gashes in her back.

She crawled onto the road as she flitted in-and-out of consciousness and was able to flag down a car. 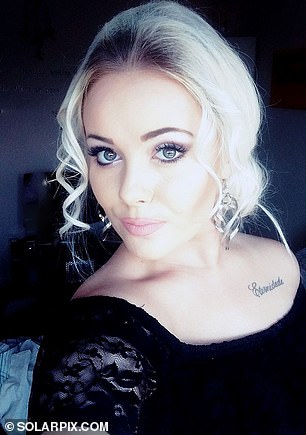 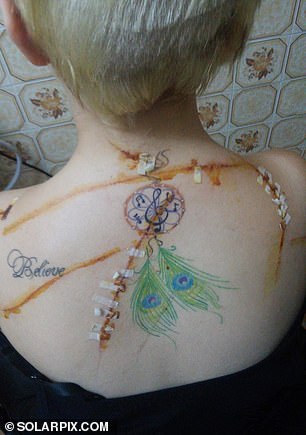 Leighanne Rumney, 22, from South Shields was the victim of the horrific attack in a Portuguese forest in May 2015. She was left with cuts all over her back (right)

After she was convicted of the horrific attack, Carvalho screamed abuse at the female judge, shouting ‘You are a wh***, a little wh***’ in Portuguese.

Her mother, Rute Isabel Fernandes Almeida, 40, and a third Roma gipsy tried over the attack were acquitted.

Despite her conviction for aggravated kidnap and her verbal attack on the sentencing judge, Carvalho was allowed to walk free from court pending an appeal.

Ms Rumney was not in court for the sentencing. 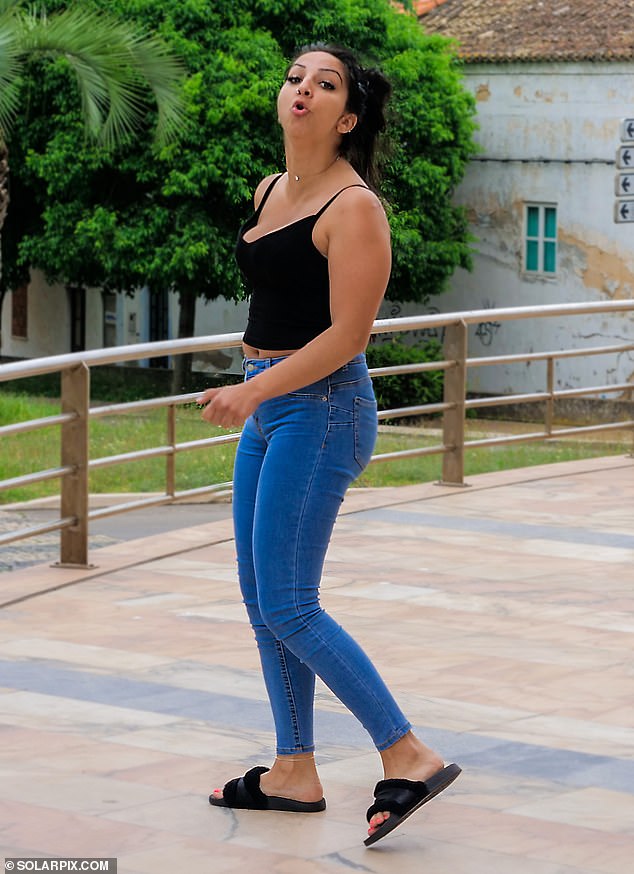 A furious Eliana Isabel Almeida Carvalho, 24, leaving court after she was convicted of the attacked and sentenced to six and a half years

The judge, one of three who tried the Roma gypsy trio, told the Brit’s attacker: ‘It was an aggravated kidnapping because it was accompanied by torture and it was cruel, degrading and inhuman treatment.

‘In deciding on the penalty, we considered the lack of regret and the fact that the violence used was excessive, gratuitous and senseless.’

She added: ‘The victim was left in fear of her life and she was forced to leave the country.’

Ms Rumney was working as a waitress at The Hot Shot Bar in the party resort of Albufeira when she caught the eye of a local gypsy regular.

She said she spurned his advances but his family became convinced they were having an affair and lured her into a trap to exact ritual revenge.

Prosecutors told the court two female attackers including Carvalho had turned up at the bar Ms Rumney was working at, persuaded her to get into a car driven by a third suspect, and took her to a remote spot where she was ‘abandoned to her fate in a wild, isolated and unfamiliar place, naked and seriously wounded and bleeding to death’ after being kicked and stabbed. 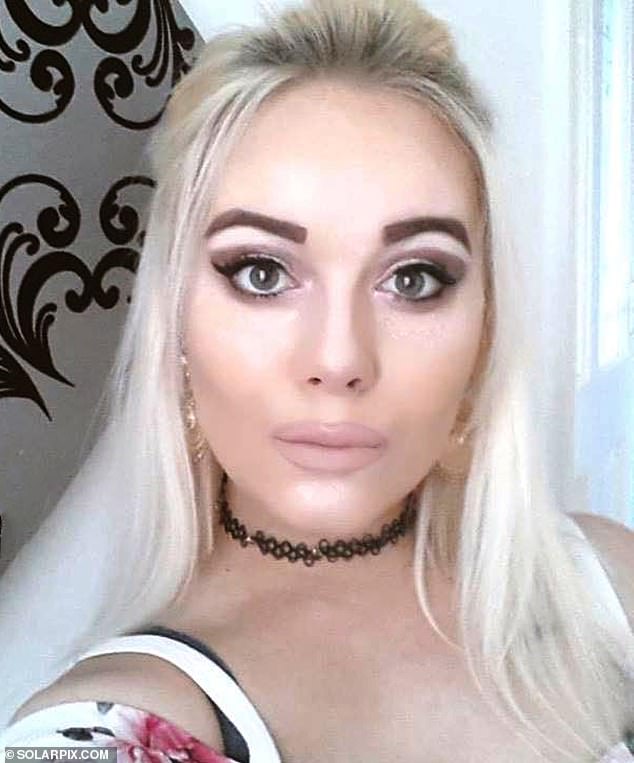 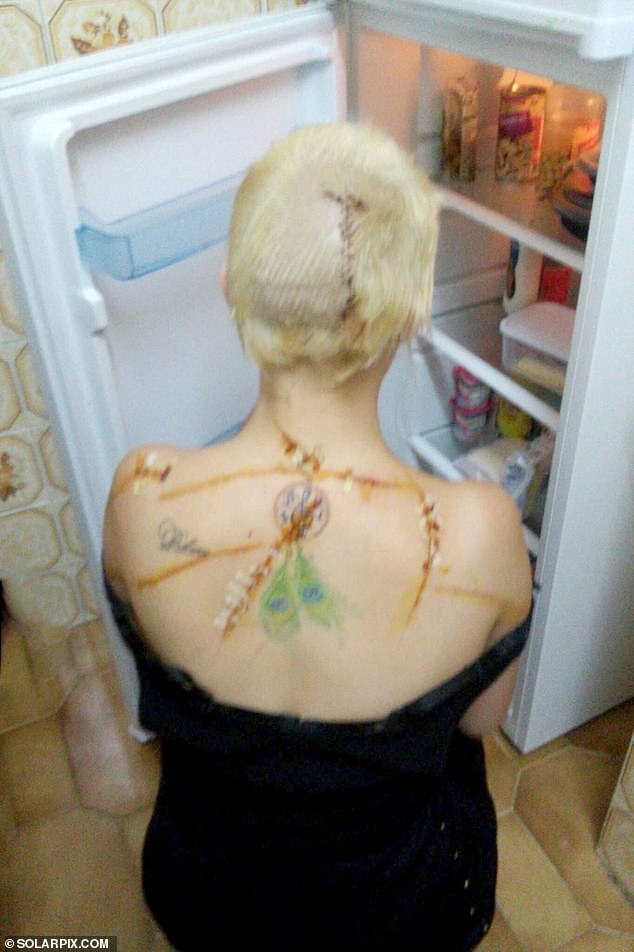 She lost two litres of blood and needed emergency surgery after staggering into the road to flag down a passing car.

Her attackers stabbed her and hacked her hair off with scissors before stripping her clothes off.

Her sister Kayleigh Ann shared an online appeal for financial help after the traumatic attack.

She wrote: ‘My sister moved to Portugal for a new exciting adventure only to be violently attacked by three people who punched and kicked her as well as attacking her with knifes and a pair of scissors.

‘She survived the ordeal with seven stab wounds, various marks and a 30cm cut on her head and she also lost two litres of blood.

‘They cut her hair off as a sick jealousy ritual. 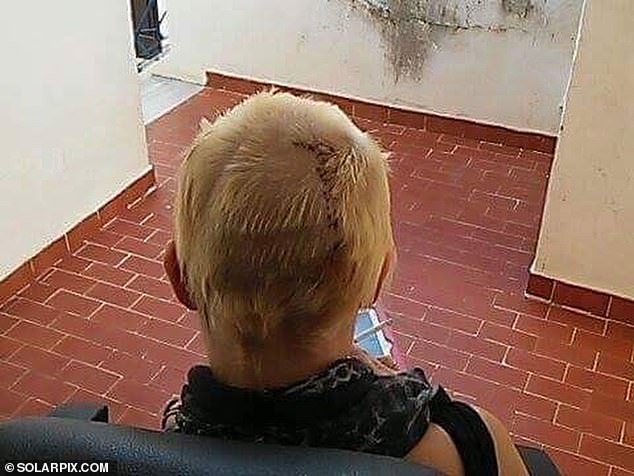 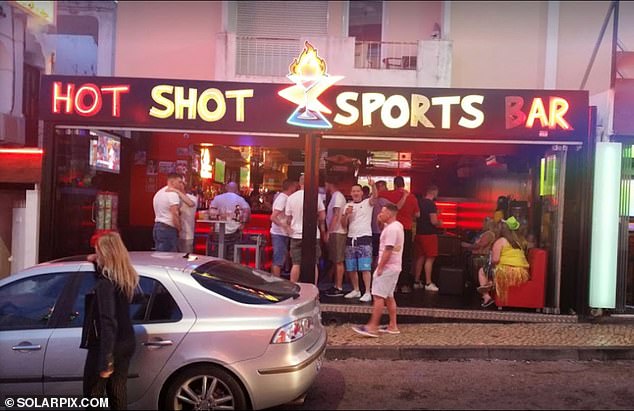 Ms Rumney was working as a waitress at The Hot Shot Bar in the party resort of Albufeira when she caught the eye of a local gypsy regular, allegedly Carvalho’s husband

‘I would like to raise as much money so we can fly out to see her as well as buy her a wig to replace her beautiful long blonde hair.

‘She is such a strong person and she escaped with her life. This could have been a lot worse. Please help me raise enough money to restore her confidence and get our family over there to see her and help her get justice.’

Ms Rumney, who is now back in the UK, revealed before the trial started that she no longer takes showers because she is haunted by the feeling of blood pouring down her back.

Speaking of the gipsy regular who she was accused of having an affair with, she said: ‘I noticed this man was taking an interest in me when I was working behind the bar but I didn’t fancy him and never dated him. 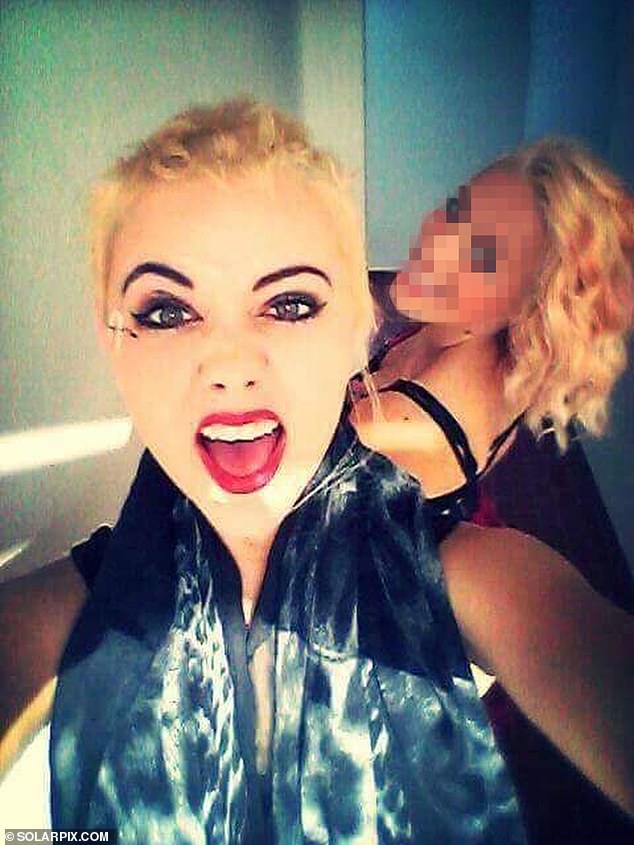 ‘But his family seemed to think we were having an affair and wouldn’t listen to me when I tried to explain nothing was going on.

‘I was very naive and made the mistake of accepting a lift home from them and realised straight away I was in trouble.

‘They drove me 45 minutes away from where I lived to a remote spot then opened a bag which I saw contained a knife and scissors.

‘I was convinced they were going to kill me and was so scared I didn’t move or speak as the two women stripped me naked and started stabbing me in the back.

‘They finally took the scissors and chopped off all my hair – it was some kind of a ritual to shame me – then left me with blood pouring from my wounds.

‘I thought I was going to bleed to death.’

The trio tried at Portimao court come from Porches near Albufeira.

Judge Patricia Avila, revealing why she was acquitting Eliana’s mother and alleged driver Tiago Filipe Loures Soutenho, 22, said: ‘This court finds it has been proven the guilty woman acted with the help of two other people, a male and a female, whose identities have not been able to be established.

‘There’s no conclusive evidence Tiago Soutenho perpetrated the crimes he was accused of and the Portuguese consulate in Dusseldorf has submitted evidence to show the other defendant was there at the time so couldn’t have been involved.’