Wealthy pockets of Sydney and Melbourne have some of the country’s highest vaccination rates, while poorer parts of Sydney’s west and south hit hardest by the latest outbreak have among the lowest coverage in NSW.

Melbourne’s west, which felt the full brunt of Victoria’s second wave, has the lowest vaccine takeup in the state, while parts of outback Australia are also lagging behind with fewer than 10 per cent of the population in some regional areas fully vaccinated, more than five months into the rollout. 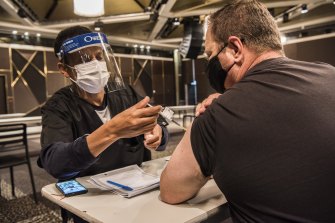 Sydney’s south-west, at the epicentre of the latest outbreak, has one of the lowest rates of fully vaccinated people in the state with 14.6 per cent having received both doses, followed by the inner south-west (16.1 per cent) and Parramatta region (17.7 per cent).

The eastern suburbs, North Sydney and Hornsby, Baulkham Hills, Ryde and the inner west have the highest number of eligible residents fully vaccinated.

More than one quarter of residents in North Sydney and Hornsby are fully vaccinated – the highest in the state – compared to only 13 per cent in the state’s Far West and Orana.

The only regions in NSW where more than 50 per cent of the population has received a first dose are the Southern Highlands and Shoalhaven. In Victoria, Bendigo, Warrnambool and South West, and Geelong have the highest first-dose vaccination rates, at 52.6, 51.6 and 51.4 per cent respectively.

Leading epidemiologist Mary-Louise McLaws described the scenario painted by the data as “shameful”, and called for an overhaul of the vaccination strategy.

Instead of vaccinating people in their 40s and 50s, she said authorities should be targeting young people in hotspots most likely to spread the virus, such as Sydney’s south-west.

Professor McLaws said up until now it had been up to individuals to try to get a vaccine, but there should be a concerted effort to reach vulnerable people working in essential jobs, who cannot work from home.

“They’re often working multiple jobs, and they have a greater representation of trade jobs, basically meaning they can’t take time off and make it up after hours,” she said.

“Go to people. Go to their employers … and help them roll out the vaccine for people who can’t, or feel obliged, that they can’t take time off.”

Handful of areas where one in four are fully vaccinated

Only seven areas of Australia have more than a quarter of their population fully vaccinated against COVID-19. And just seven areas have managed to get at least one dose to more than half of their residents aged over 15.

Launceston and North East Tasmania had 27 per cent of its residents fully vaccinated on August 1, the highest rate. Northern Sydney and Hornsby have the second-highest rate – 26.9 per cent, followed by Inner Perth and Geelong (25.9 per cent).

The lowest rates are all in regional areas, led by Western Australia’s outback (north) where 8.6 per cent of its adult population are fully vaccinated. The Queensland regional areas of Mackay/Isaac/Whitsunday had 10.2 per cent and Logan/Beaudesert 13.2 per cent full vaccine coverage rates.

Only NSW, Victoria and Tasmania have regions where more than 50 per cent of the population has received a first dose.

The highest take-up in Queensland is in Brisbane’s west, with 24.5 per cent of that population fully vaccinated and 46.2 per cent covered by one dose. In South Australia Adelaide’s south has the highest vaccination rate with 22.8 per cent fully immunised and 46.1 per cent partially vaccinated, while in inner Perth 48.9 per cent have received one dose and 25.5 per cent have had both.

On Tuesday Premier Gladys Berejiklian said one of the reasons the city’s south-west has one of the lowest vaccination rates was because the population in the worst affected areas is “younger than the state’s average.”

“Until recently, the health advice precluded a lot of people coming forward and getting vaccinated,” she said.

“That is why we have a concerted effort, whether it’s via mobile clinics, going to community hubs to vaccinate and ramping up pharmacy access,” Ms Berejiklian said.