A barrister acting for federal Liberal minister Christian Porter has told the Federal Court a fight to stop a Sydney defamation expert from representing him in his proceedings against the ABC is a “storm in a teacup” and she should not be restrained from acting in the case.

Jo Dyer, a friend of the woman who accused Mr Porter of rape, is seeking a court order to restrain prominent defamation silk Sue Chrysanthou, SC, from acting in the defamation proceedings because of an alleged conflict of interest. An urgent three-day hearing started on Monday. 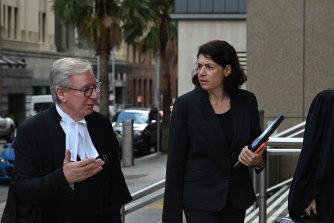 Sue Chrysanthou SC, right, arrives at the Federal Court in Sydney on Monday with her barrister, Noel Hutley SC.Credit:Kate Geraghty

Ms Chrysanthou gave free advice to Ms Dyer, who is expected to be a witness for the ABC in the defamation proceedings, on November 20 last year and on January 27 and 28 about an article in The Australian newspaper published after Ms Dyer appeared in a Four Corners broadcast last year about Mr Porter and other ministers.

The rape allegation, denied by Mr Porter, was not aired as part of that broadcast. The woman who accused him of raping her in the late 1980s, when they were both teenagers, took her own life last year after telling NSW Police she did not wish to pursue her complaint.

Christopher Withers, SC, acting for Mr Porter, told the court on Monday the bid to remove Ms Chrysanthou from the case was “just a storm in a teacup”. He said Ms Chrysanthou “gave some very limited advice” on November 20, with some follow-up earlier this year.

He said there was no risk of misuse of any “supposedly” confidential information, and the information was already in the public domain.

But Michael Hodge, QC, acting for Ms Dyer, said it could not “seriously” be suggested all the information was in the public domain. He said an affidavit sworn by a former boyfriend of the woman who accused Mr Porter of rape, Macquarie banker James Hooke, would sweep away “any last vestiges of doubt” about whether Ms Chrysanthou could continue acting in the proceedings.

Mr Hooke was present at a November 20 meeting between Ms Chrysanthou and Ms Dyer at the barrister’s chambers in Sydney. Mr Withers questioned whether the asserted confidential information that was sought to be protected was actually Mr Hooke’s and not Ms Dyer’s.

“Obviously, he has no right to seek to restrain Ms Chrysanthou from acting in this case because she was never his lawyer,” Mr Withers said.

The court has been told Ms Chrysanthou agreed to advise Ms Dyer as a favour to her friend, barrister Matthew Richardson, who was also present at the meeting. The court heard on Monday that there was correspondence between Mr Richardson and Ms Chrysanthou in March this year in which he attempted to dissuade her from taking on Mr Porter’s case because she had acted for Ms Dyer.

Mr Hodge said Ms Dyer’s legal team had tried not to “bring even more people into this” by calling Mr Richardson to give evidence about his recollection of the November 20 meeting, but would now ask him to give evidence in light of comments by Mr Withers that their failure to call him suggested he would not assist their case.

Mr Hodge said it was not yet clear whether an affidavit filed by Ms Chrysanthou in court provided what she believed was a “complete account of what was discussed” with Ms Dyer and Mr Hooke, or if she accepted that other topics were raised but said she couldn’t remember them.