As apples ripened at their Launching Place farm, David and Sue Finger faced a race against time.

International borders were still closed due to coronavirus and the backpacker and local workforce was in short supply.

Now, the arrival of six workers from Vanuatu will give them just enough labour to pick their apples before they pass peak maturity. 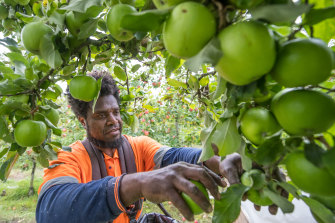 Massi Gregiore, one of the first Pacific Islanders to arrive under the seasonal workforce program, picks fruit at Vernview orchard in the Yarra Ranges.Credit:Jason South

“We would have struggled [without the workers],” Mr Finger said. “We would have slipped by a day or two every week and by the end of a month you are two weeks behind.”

The Pacific Islanders are among 200 pickers who arrived in Victoria this month under the federal government’s seasonal worker program.

Up to 1500 workers will quarantine in Tasmania and arrive in Victoria between now and June. Employers pay for airfares and about $2000 towards each worker’s quarantine. The Victorian government is spending $7.8 million to cover the rest.

In return for the workers quarantining in Tasmania, 332 Tasmanians will stay in Victorian hotel quarantine as they return from overseas. 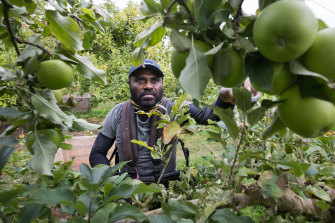 In one week picking fruit, Kaltak Takaua can earn the equivalent of a month’s wages from his Vanuatu poultry farm.Credit:Jason South

Kaltak Takaua – one of six workers to arrive at the Fingers’ Vernview orchard after quarantining for two weeks in Hobart – said travelling during the pandemic was a concern for the group but it was outweighed by the desire to help their families financially.

In one week picking fruit in Victoria he can earn the equivalent of a month’s wages from his Vanuatu poultry farm. He’ll send his earnings home to support his wife and four children.

Joel Piniwoh said he earned about $24 an hour and was sending the money back to his parents in Vanuatu, where the tourism industry had been devastated.

“Due to this pandemic every business is down,” he said.

Ms Finger said the orchard employed local people but it did not have the consistency of work needed to employ harvest numbers year-round.

She said the farm was lucky because it was receiving workers from the first plane to arrive in Tasmania, but other farmers still faced uncertainty.

“It is a particularly stressful time. You have to plan your labour requirements. This year we have perhaps one of the biggest apple crops going around Australia, so that’s actually added to the issues we’ve had.”

Victorian Agriculture Minister Mary-Anne Thomas said it had been a challenging year for growers.

“What the pandemic has exposed is the horticulture industry is over-reliant on overseas workers,” she said.

“The industry would normally rely on many backpackers. Backpackers are not coming back any time soon.”

Not all of the 1500 available Pacific workers had been taken on, so there were still opportunities for employers to plan ahead, Ms Thomas said.

The state government is also investing $76 million to support growers through programs to employ local workers.

An EY report predicted the Australian horticultural industry would be 26,000 workers short during the six months from October last year, with labour shortages peaking in March.

Ms Finger said the 1500 Pacific workers would not be enough to service Victoria.

“Victoria is one of the biggest horticulture states,” she said.

“Hopefully, approved employers and the state government can work together to do some workforce planning and ensure that we meet the needs of growers going forward.”