Supermarket shelves across Florida have been stripped bare as panicked locals prepare for the first major hurricane to make landfall in the sunshine state in four years.

Photos from the weekend showed lines of Floridians stretching back from supermarket registers through aisles stripped bare of bottled water and other essentials.

Shots from one Florida Costco showed an individual with two industrial sized pallets piled high with cases of water, while at Home Depot and hardware store’s people flocked to the construction materials aisle to load up on planks of plywood to board their windows up with.

Tropical Storm Ian is expected to strengthen into a hurricane on Sunday and reach ‘major’ hurricane strength – anything Category 3 or above – on Tuesday before it hits Cuba.

The storm is expected to make landfall in Florida midweek, either late Wednesday night or early Thursday morning, and bring with it 130mph winds.

Florida Governor Ron DeSantis declared an emergency across the entire state and its 67 counties on Saturday afternoon in a sign of officials’ high concern.

As of Sunday morning, the storm was roughly 540 miles off of Cuba’s western tip. The National Hurricane Center said it could reach ‘major hurricane strength’ before touching down on the Caribbean nation.

The cities of Orlando, Panama City and Tampa are all in Tropical Storm Ian’s path, according to the most recent projections The Weather Channel. Parts of Alabama and Georgia are also likely to be affected.

Residents in the expected path have been urged to make hurricane preparations as National Hurricane Center officials warn of the higher-than-normal degree of ‘uncertainty’ in the storm’s forecasted path and intensity.

President Biden also declared an emergency in Florida and activated federal disaster relief aid for the state, just an hour before he cancelled his Florida visit to campaign with Democrat midterm candidates. 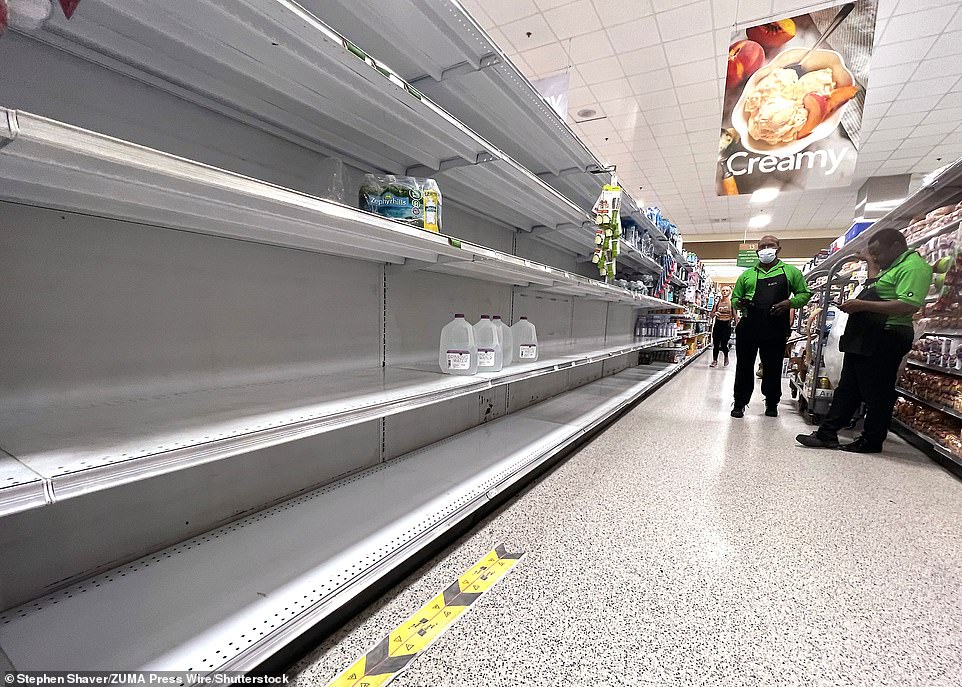 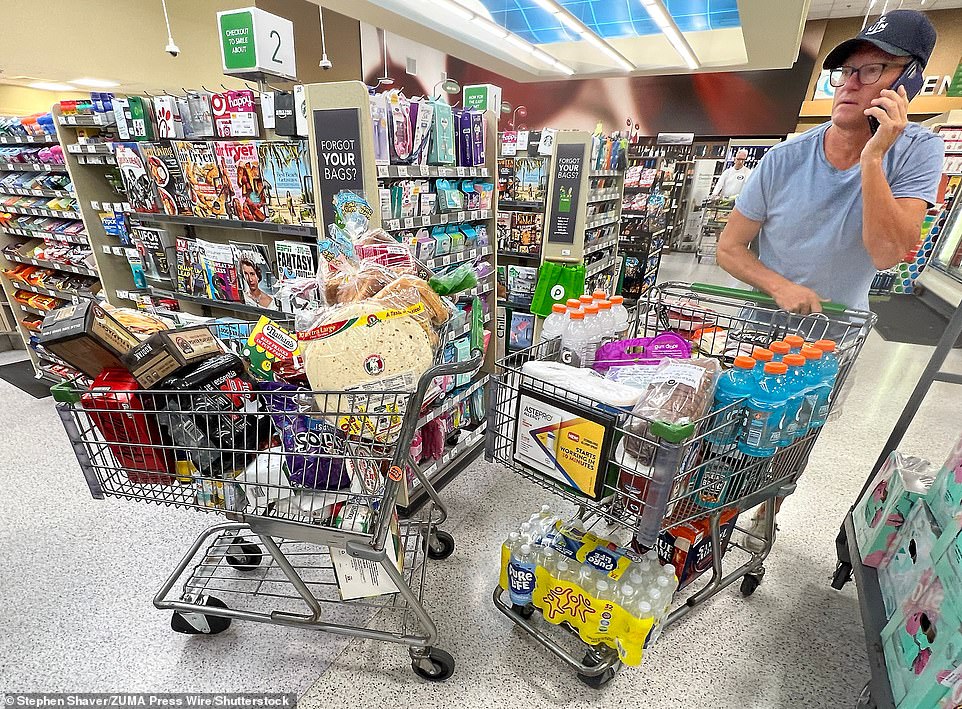 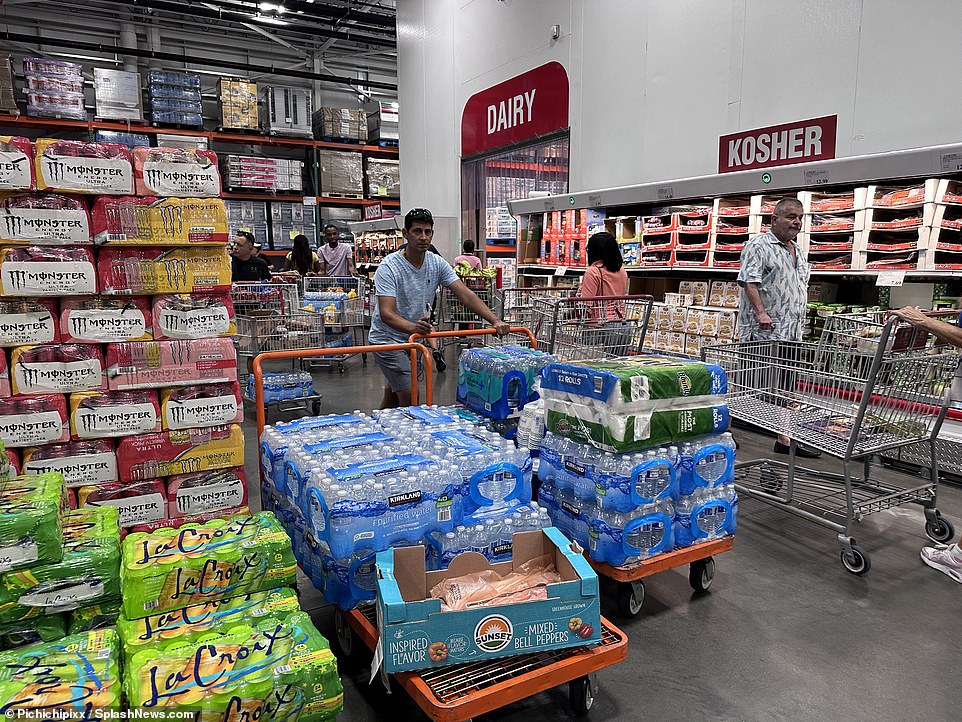 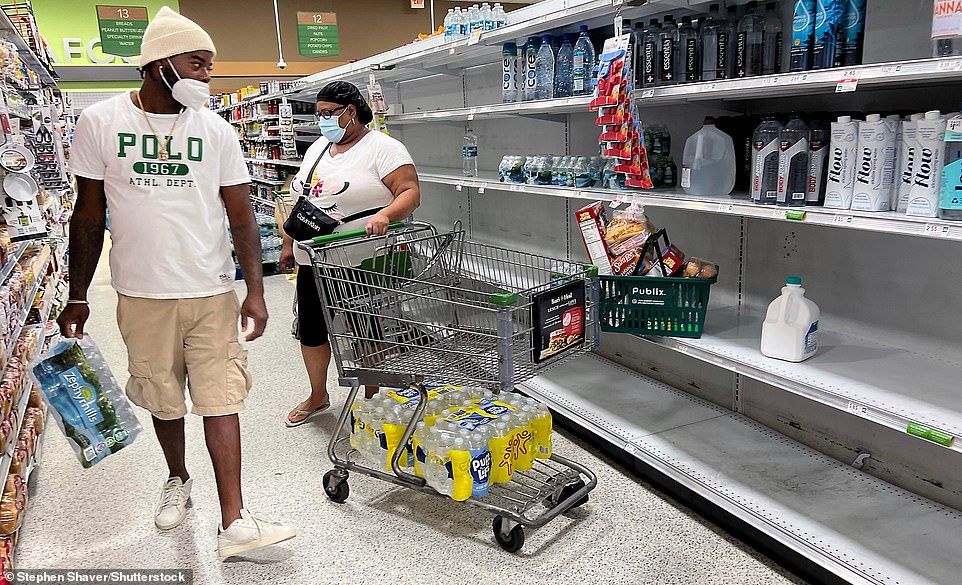 As of 8am on Sunday morning, Tropical Storm Ian was roughly 590 miles off of Cuba’s western tip 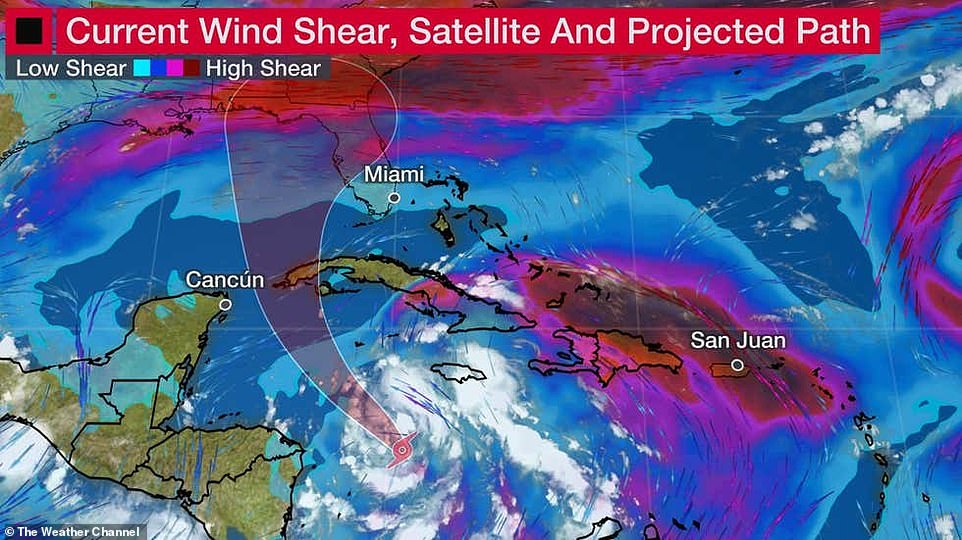 It was postponed over Tropical Storm Ian, which is expected to strengthen into a hurricane on Sunday before making landfall in Florida later this week 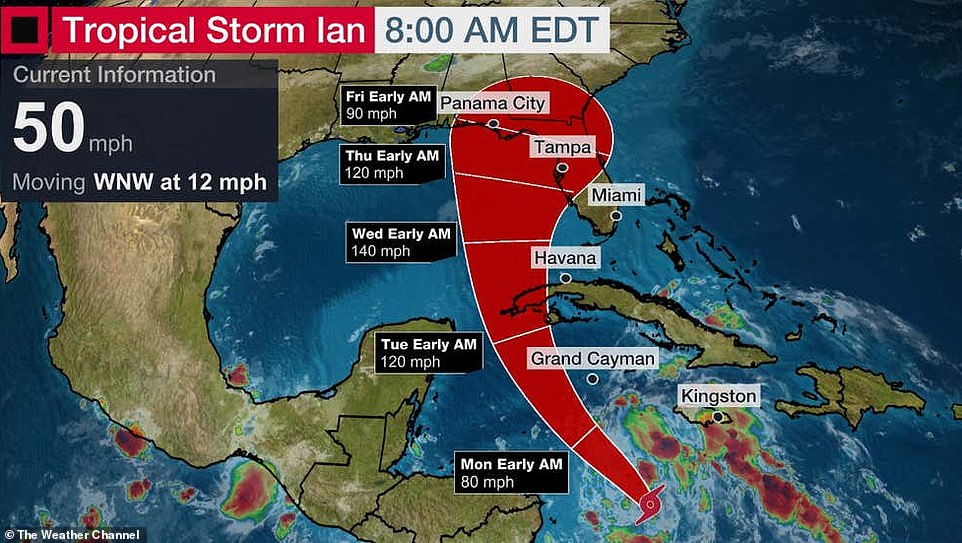 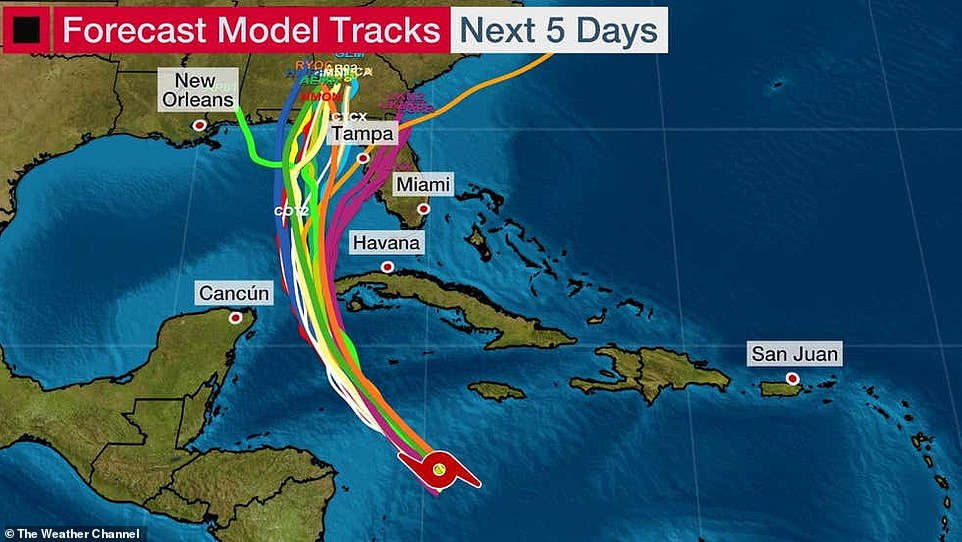 It’ expected to make landfall in Florida later this week, with projections indicating Thursday or Friday 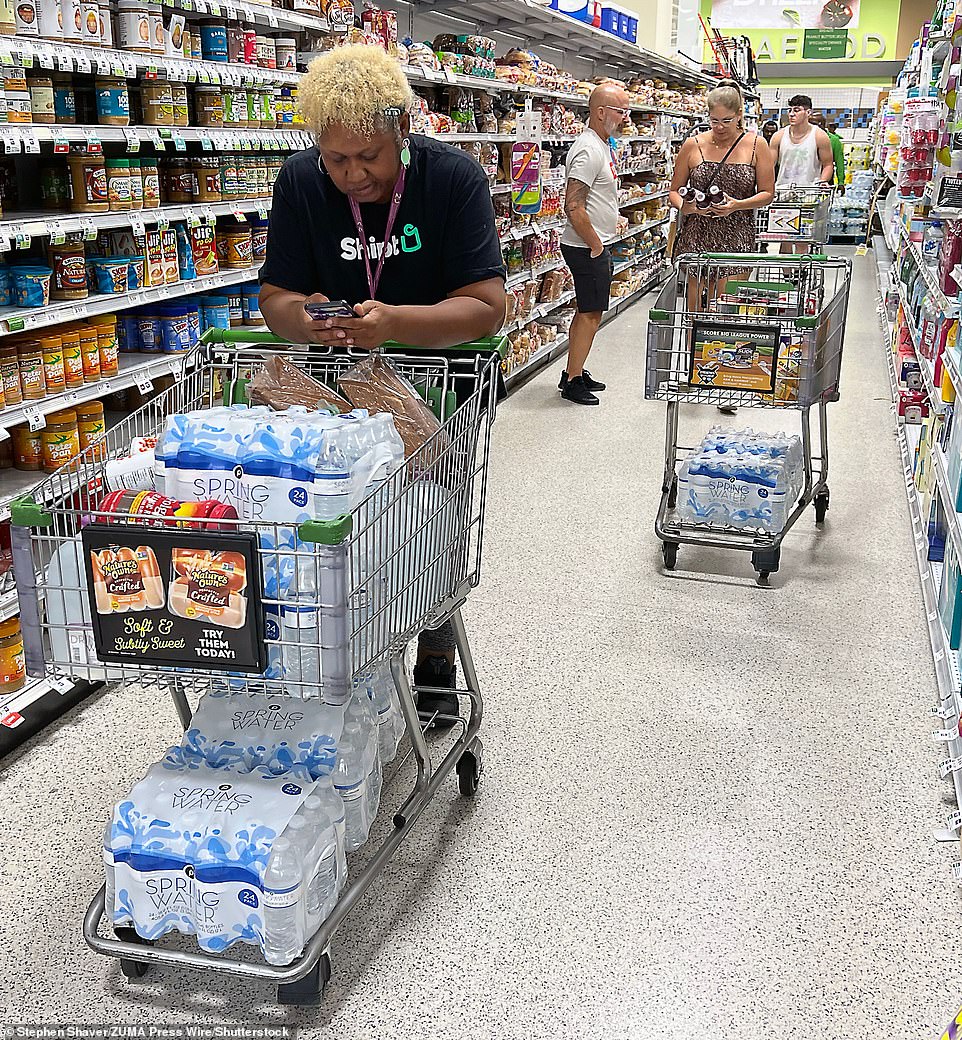 Shoppers stock up on emergency water and hurricane supplies at a supermarket in Ft. Lauderdale, Florida on September 24 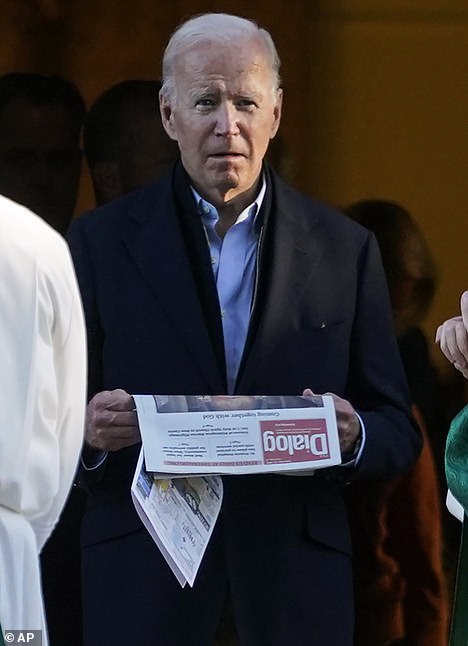 President Joe Biden’s DNC appearance in Florida on September 27 was postponed, the White House announced late on Saturday, just after he declared an emergency in the Sunshine State

Biden was due to appear in Orlando for a Democratic National Committee rally on September 27.

The White House announced on Saturday night that the trip would be postponed due to the incoming tropical storm.

The president was expected to call out Florida Republican Governor Ron DeSantis on his home turf in an appearance alongside his challenger, Democratic House Rep. Charlie Crist.

Crist, a former Republican who was governor from 2007-2011, is leaving the House of Representatives this year as he seeks a return to Tallahassee.

Polls show DeSantis with just a single-digit lead over Crist with less than two months until the midterms, as Florida tests out a new Congressional map largely drawn to favor GOP candidates.

When asked about a later date, the White House told DailyMail.com that it had nothing further to add at this time.

It’s not clear yet if the DNC is calling off the entire Tuesday event or if it will go on without the president.

Biden’s last planned trip to Florida was meant for July – but was called off when the president tested positive for COVID-19.

Though he hasn’t campaigned in the Sunshine State, Biden has not shied away from ripping its governor at public events elsewhere and holding him up as boogeyman to push Democrats to the polls.

The popular governor has seen a meteoric rise within the GOP for his vocal criticism of the Biden administration and culture war-influenced policies on education, LGBTQ issues and, now, the border crisis.

DeSantis outraged progressives and immigrants’ rights activists earlier this month when he sent a plane of undocumented migrants who crossed the US-Mexico border to the island of Martha’s Vineyard, a bastion of liberal wealth.

Local officials said they received no warning for the flights and it has been suggested by some migrants’ lawyers that they were sent there under false pretenses.

Biden tore into DeSantis and Republican Texas Governor Greg Abbott last week, accusing them of using migrants as political pawns. Abbott has been sending buses of people to New York City and Washington, DC, where the Democrat mayors have declared the population influxes to be a crisis.

‘Instead of working with us on solutions, Republicans are playing politics with human beings using them as props,’ Biden said at the Congressional Hispanic Caucus Institute Gala. ‘What they’re doing is simply wrong. It’s un-American. It’s reckless.’ 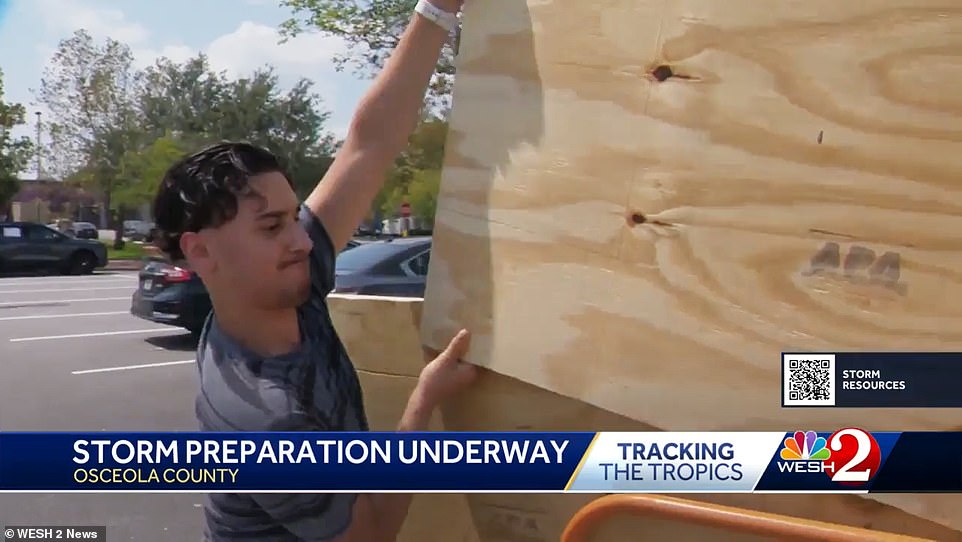 Bradley Sierra and his family load plywood to board up their home at Home Depot in St. Cloud, Fla., as they spent Friday stocking up. ‘We got a lot of water, food, gasoline, a generator in case the power goes out,’ he said 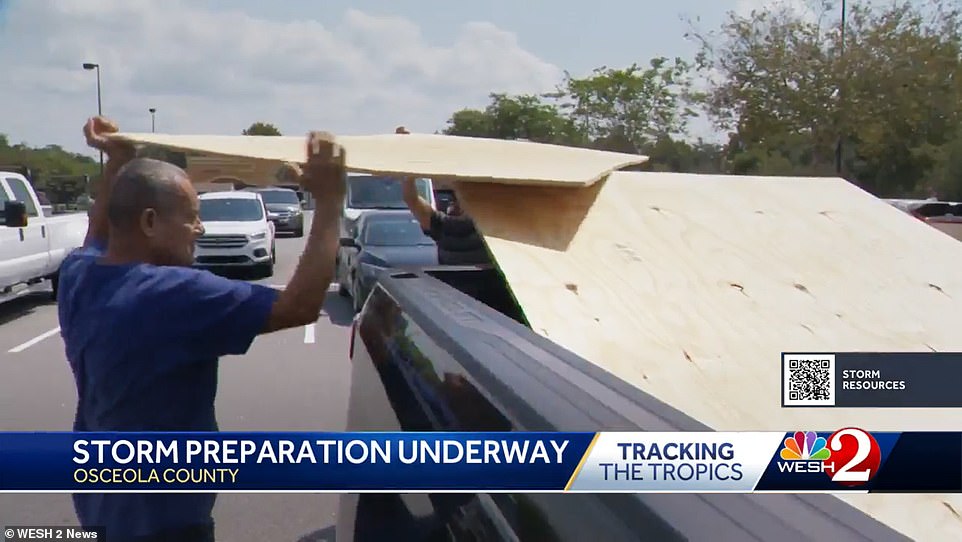 Residents in Osceola County, south of Orlando, are already stocking up on plywood boards 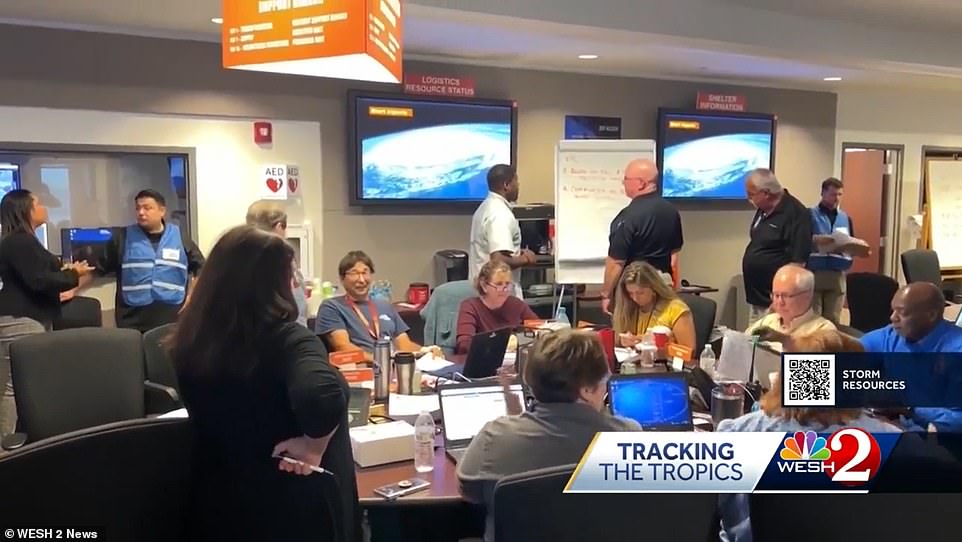 The National Hurricane Center has been tracking Tropical Storm Ian, forecast to strengthen into a hurricane within the next few days 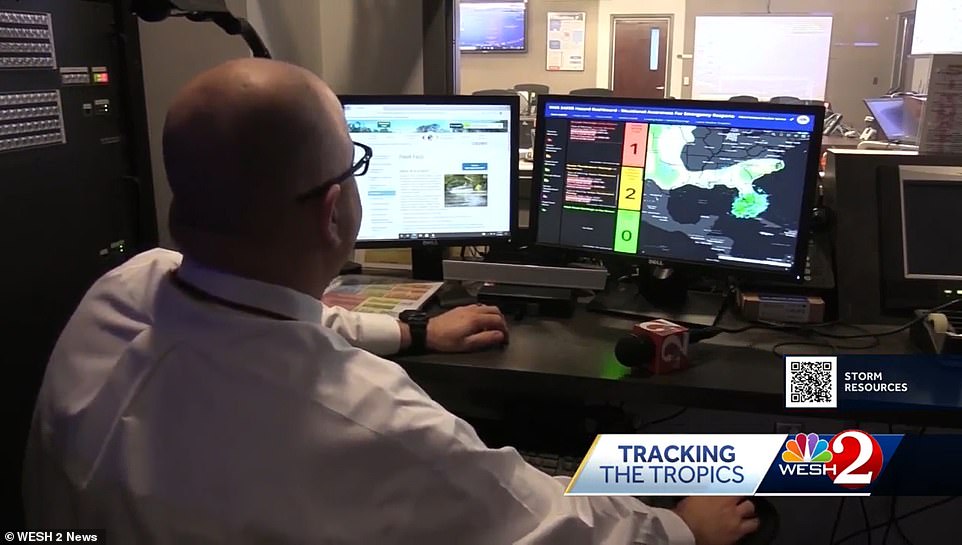 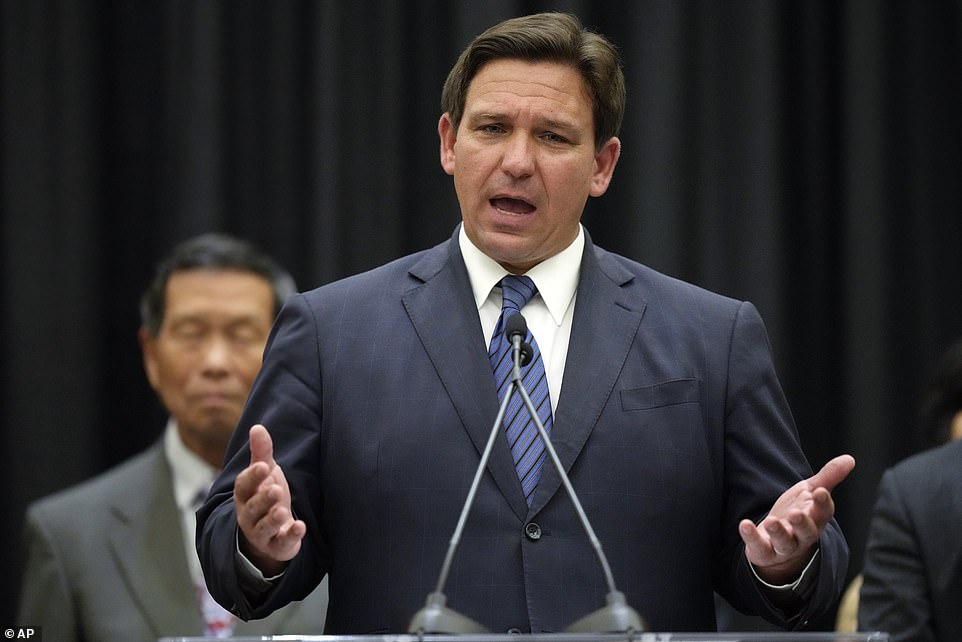 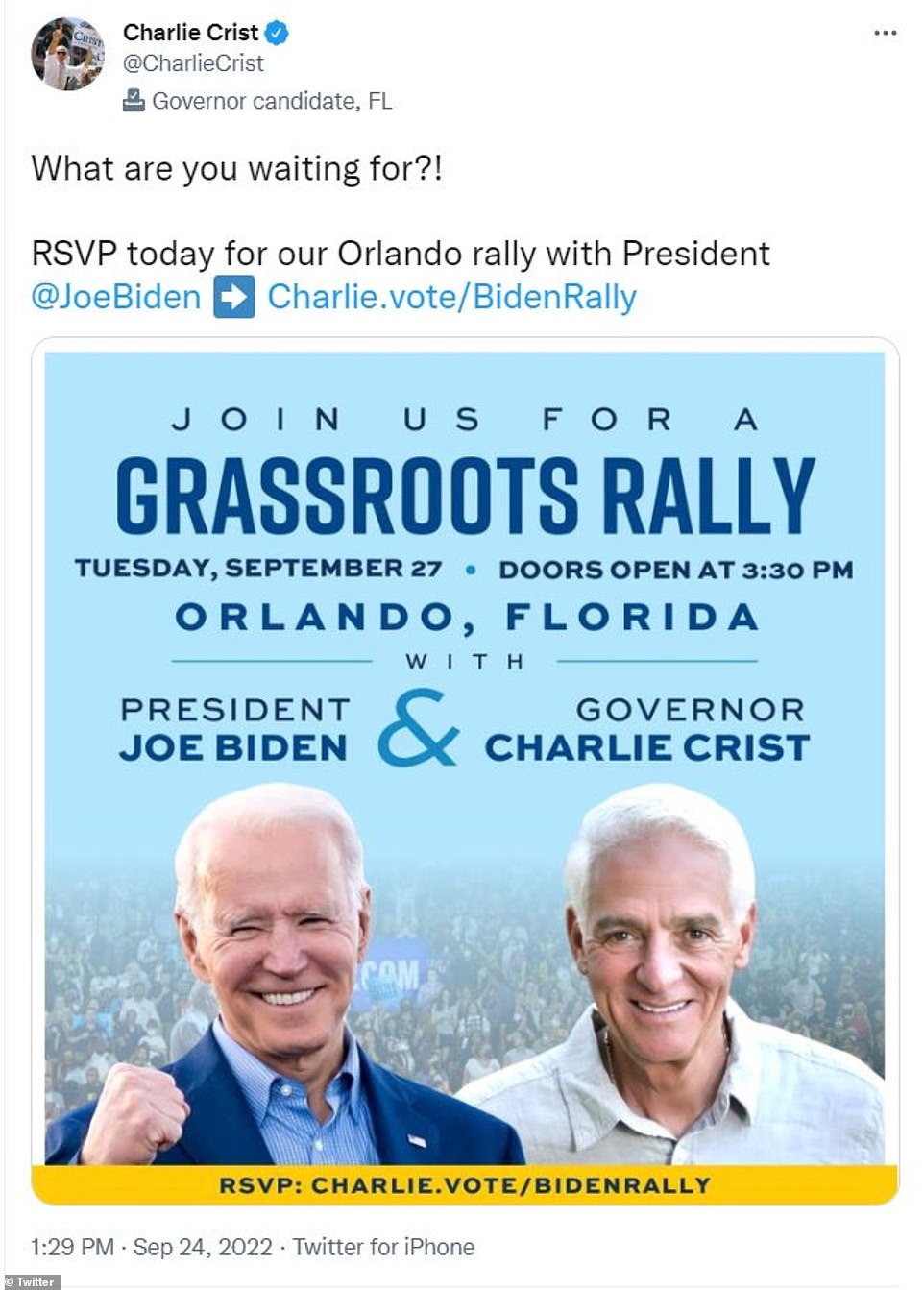 He’s locked in a tight race with Democrat House Rep. Charlie Crist, who was previously governor of Florida as a Republican from 2007 to 2011