United Press International reported the usually taciturn crewmen shook all inhibitions as they filmed themselves transferring from their command ship into the fragile lunar module Eagle. 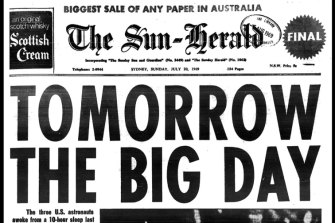 Front Page of the Sun Herald from July 20, 1969Credit:Sun Herald

Neil Armstrong and Edwin Aldrin, the astronauts who will walk the moon, broadcast for approximately one hour 36 minutes with fellow-astronaut Michael Collins. It was also the first colourcast from inside the lunar module.

The previous record for space broadcasting was 43 minutes three seconds by the Apollo 10 crew last May.

As Armstrong cranked a wrench to remove the docking probe to enter Eagle, he asked: "Can you see that?"

In the first demonstration of actual work aboard the spacecraft, the probe was removed from the tunnel and stowed into the cabin of the command ship Columbia.

"Mike (Collins) must have done a smooth job on that docking," Armstrong said. "There isn't a dent or mark on that probe."

Then Collins entered the tunnel to check some connections. The hatch remained closed on Eagle. 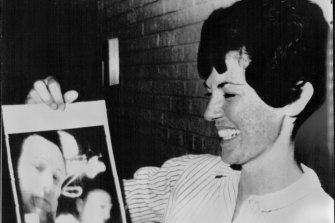 A proud Mrs. Michael Collins, wife of Apollo 11 command module pilot, looks at a photograph taken during a telecast from space by the astronauts. July 19, 1969.

"Everything up there looks just fine," reported Collins as Aldrin operated the television camera.

After both the Apollo crew and ground control inspected the yellow hatch cover for Eagle, Armstrong said "Looks like we'll be ready to go into the LM early if that's okay with you all down there."

Aldrin opened the hatch. Collins reported an automatic light came on "just like in a refrigerator." "The vehicle is surprisingly free of any debris floating around," said Aldrin who will pilot Eagle to the moon. "It's very clean."

The only jarring note came when – Armstrong reported some damage to a floodlight mast, which would be used as an aid in an emergency transfer of the lunar module crew into the command module.

But Space' Agency, officials said the problem was not considered significant and that even if such a transfer were necessary it could be done without the light.