The new “bendy tram” was unveiled at the Preston tram workshops yesterday.

The double section vehicle is hinged by a concertina passageway. 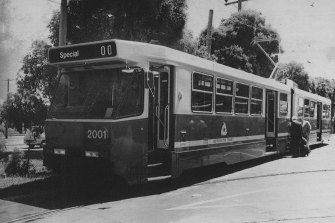 One of the prototype trams in action in 1990.Credit:The Age Archives

Commuters on the East Burwood tram line could be riding on Melbourne’s first articulated tram by late next month, the Minister for Transport, Mr Crabb, said yesterday.

As well as the East Burwood line, the Metropolitan Transit Authority says the vehicle can be used on the new Bundoora line and is suitable for use on proposed light rail lines to Doncaster, St Kilda and Port Melbourne.

But because the MTA wants the new vehicles to replace trains on the St Kilda and Port Melbourne lines, the Australian Federated Union of Locomotive Enginemen says its members should man the vehicles on former rail lines.

The tramways union says its members should have the exclusive right to operate light rail vehicles on all lines and has applied to the MTA for a special technology and extra skills allowance.

The State secretary of the union, Mr Jim Harper, said: “Unless that’s done promptly then that vehicle will be sitting in the workshop for some time.”

New vehicles on the rails

Melbourne’s first articulated light rail vehicle (LRV) yesterday went into service on the Burwood line, according to the Minister for Transport, Mr Crabb.

The LRVs, which cost about $800,000 each, have a greater carrying capacity than conventional trams and can be used on a light rail line, possibly between the city and Doncaster, St Kilda and Port Melbourne.