Is this why most people couldn’t give a XXXX for beer judging?

Wouldn’t you think that beer judges would be a rollicking lot? They should be banging their glasses on the table and telling rowdy jokes. It is sad to report that nothing remotely like this has been happening in the past few days at Ballarat. 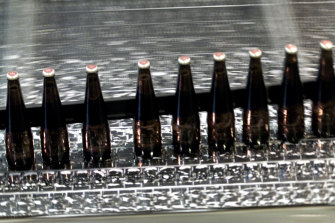 Beers on a production line.Credit:Joe Armao

Nine knowledgeable beer men have just finished judging 130 entries in the national brewing exhibition held annually at the Ballarat College of Advanced Education. Watching them at work was like spying on a life-and-death conference of doctors. They wore white coats, they nodded gravely, and they talked quietly and urgently. You felt afraid to move your chair in case the noise disturbed them. Every so often, they reached for a glass and took a sip.

They did this for five hours on Wednesday, and three hours yesterday, seated in groups of three at separate tables. Poor fellows, it turned out that they weren’t allowed to discuss the beer. They could discuss the beer they had last week, or the beer they would have next Tuesday, but not the beer in front of them.

Nor, having taken a sip, could they spit it out as the wine men do. This was made clear later by one of the judges, David Watson, who, 20 years ago, brewed Melbourne’s first Courage beer and created Crest lager. “You must swallow the beer,” he said: “You can’t relish the taste otherwise.”

They sipped and cogitated and, wrote numbers on paper, and then white-coated stewards would glide across the carpet with trays and more beer. Each entry reached the college in bottles that bore no markings except the number of the class, the type and a distinguishing mark. Each could score a maximum of 20 points, eight of which concerned physical characteristics such as carbonation, foam formation, colour and the way the beer clung to the glass. The other 12 points concerned aroma, balance, aftertaste and general palate appeal.

The 130 entries represented a huge rise over last year’s 32. Who would have thought a few years ago that there would be so many beers in Australia? The pub breweries are the main cause. As things turned out, the small brewers did badly this year. The judges did not make one award in the lager section. “An Incredible situation,” was how the exhibition’s director, Mr Neville Gower, described things. “They’ll have to work much harder.” A New Zealand entry, Mac’s Real Ale, submitted by McCashin’s Brewery and Malthouse, won the small brewery section ale award.

The judges named Old Hunter (NSW) as the best ale of the exhibition. It is said to be part of the Bond Corporation breweries. They named a New Zealand entry from Dominion Breweries, Waitemata, as the best lager. The champion of them all, the supreme entry of exhibition was Old Southwark Stout, made by the South Australian Brewing Company. Only two major breweries, Carlton and Unite and New Zealand Breweries, did not submit entries, Mr Gower said.