Glasgow: The COP26 climate summit is facing deadlock on its final day as countries clash over the future of fossil fuels, a mammoth financial compensation scheme and the depth of emissions cuts this decade.

United Nations Secretary-General Antonio Guterres declared the core goal of limiting global warming to 1.5 degrees was “on life support” due to the rising tensions, while Pope Francis warned world leaders would face “God’s judgement” if they fail before the Glasgow talks are scheduled to conclude on Friday local-time. 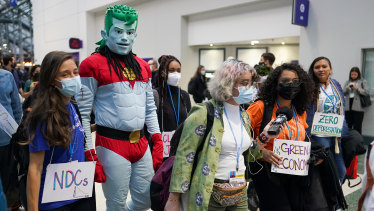 Environmental activists demanded more ambition from countries as the Glasgow climate summit draws to a close.Credit:Getty

In one surprise development, a group of nearly two dozen developing countries – thought to include major emitters such as China and India – on Thursday demanded the removal of a vast slab of the summit’s draft declaration, angering others who either want the document tweaked or significantly strengthened.

The chapter targeted for deletion makes explicit reference to the 1.5 degree goal, the need to reduce emission by 45 per cent by 2030, and the aim of net zero emissions by mid-century. It also calls on the world to “accelerate the phasing-out of coal and subsidies for fossil fuels”.

Removing those references would render the Glasgow summit a disaster, particularly given the chapter was already criticised for being too weak.

“That gives you a sense that there is not yet, at this conference, a consensus that we need to collectively ramp up our ambition,” said Archie Young, the COP26 lead negotiator. 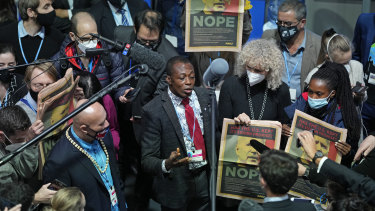 Emmanuel Tachie-Obeng from Ghana speaks to reporters ahead of the Glasgow climate summit’s final day.Credit:AP

Concerns about countries, including China, watering down the final language come only a day after the industrial giant surprised the summit by agreeing to a set of actions with rival US to counter climate change.

One official familiar with the deliberations said it was highly unlikely the chapter would be deleted but said the standoff meant it would almost certainly be watered-down.

The nations pushing for the deletion, known as the known at the Like-Minded Developing Countries, argue the chapter is unfair to poor countries. Bolivia’s chief negotiator and the LMDC’s spokesperson, Diego Pacheco, accused rich nations of trying to “transfer” responsibility for historic pollution to those with less responsibility.

“History matters and history is very important to understand and to put in the context of the discussion on ambition,” Pacheco said.

Asked whether a summit declaration that did not explicitly commit to phasing out fossil fuels was meaningless, COP26 President Alok Sharma told reporters to “wait and see” what the updated document looks like when released on Friday morning-local time. 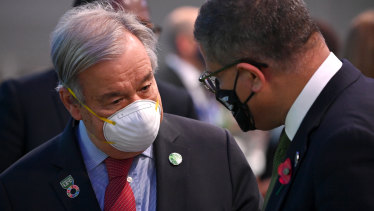 Sharma warned the summit was entering its final day with a huge gulf between countries on key issues such as how much financial support the developed world should offer developing nations to deal with climate change.

“While we have made progress…we are not there yet on the most critical issues,” he said.

“There is still a lot more work to be done and COP26 is scheduled to close at the end of tomorrow. So time is running out.”

So far, the talks have not come close to achieving any of the United Nations’ key priorities of cutting carbon emissions by about half by 2030 to limit temperature rises to 1.5 degrees. Nor have they come close to getting rich countries to fulfil a 12-year-old pledge of providing $100 billion a year in financial climate aid to poor nations.

Guterres said the Glasgow talks “are in a crucial moment” and need to accomplish more than securing a weak deal that participating nations agree to support.

“The worst thing would be to reach an agreement at all costs by a minimum common denominator that would not respond to the huge challenges we face,” he told AP in an interview.

The overarching goal of limiting warming since pre-industrial times to 1.5 degrees “is still in reach but on life support,” Guterres added.

Less than 36 hours from the scheduled close of the negotiations, Guterres said that if negotiators can’t reach ambitious carbon-cutting goals – “and very probably it will not happen” – then national leaders would need to come up with new pledges next year and in 2023 during high-level meetings.

UN climate summits are notorious for running over time and there is a growing expectation the Glasgow summit may be extended into Saturday and even Sunday.

Tina Stege, a climate envoy from the Marshall Islands midway between Australia and Hawaii, said low-lying nations were desperate for a positive outcome at COP26.

“We are far away from an ambitious Glasgow package,” she said. “This decade may be the most decisive in human history.” 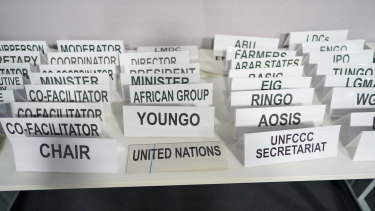 Department and position name plates laid out before negotiations begin on Thursday.Credit:Getty

Stege said she “can’t underestimate” the importance of the Glasgow summit resolving to phase out fossil fuel subsidies and coal, or “how hard we will need to fight” to keep those references in the final document.

Get daily updates on the climate summit that will shape our future. Sign up to our COP26 newsletter here.