Quetta: Three gunmen stormed a luxury hotel in Pakistan's southwestern port city of Gwadar on Saturday, killing at least one guard and battling security forces inside, officials and the army said.

Balochistan Home Minister Ziaullah Langove said most guests had been evacuated from the five-star Pearl Continental Hotel, which helicopters circled as fighting was underway. He said there were reports of casualties, but did not give details. 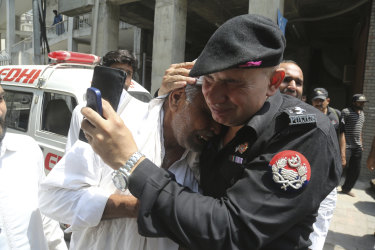 A police officer comforts a man who lost a relative in suicide bomb attack earlier this week. Credit:AP

The military said three gunmen killed a guard at the entrance to the hotel when they entered. Security forces had cordoned off the area and cornered the attackers in a staircase leading to the top floor, the military said in its statement.

Gwadar is a strategic port on the Arabian Sea that is being developed as part of the $60 billion China Pakistan Economic Corridor, which is itself part of China's mammoth Belt and Road infrastructure project.

The hotel, located on a hillside near the port, is used by foreign guests, including Chinese project staff, but there were none in the building at the time of the attack, Langove said.

Pakistani officials have said the security forces were on alert for attacks during the Muslim fasting month of Ramadan, which began in early May.

Security across most of Pakistan has improved over recent years following a major crackdown after the country's worst attack, when some 150 people, most of them children, were killed in an attack on a school in the western city of Peshawar in 2014.

But Balochistan, Pakistan's largest province, remains an exception and there have been several attacks this year, with at least 14 people killed last month in an attack on buses travelling between the southern city of Karachi and Gwadar.

Saturday's incident follows a bombing this week that targeted police outside a major Sufi shrine in Lahore, in the north of Pakistan, that killed at least 10 people and wounded more than 20, officials said.