Shocking footage has captured the moment a hair salon worker ran straight into a glass door when he sprinted outside to greet a visitor.

The CCTV clip, captured in Da Nang, Vietnam, shows a group of employees as they gather inside the salon on March 13.

One of the men then abruptly stands up when he notices a person approaching the store, before running towards the door which he believes to be open. 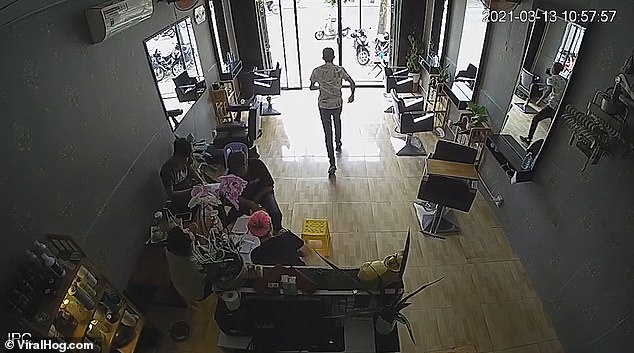 The CCTV clip, captured in Da Nang, Vietnam, shows a group of employees as they gather inside the salon on March 13

However, the floor-to-ceiling glass door is closed – and the man collides painfully with a loud bang before crashing to the floor.

His colleagues rush over to the man as he falls, with one of the employees helping the worker up into a seated position as he rubs his head.

Another checks the glass isn’t broken, before sliding the door open and running over to the customer who pulled up on a scooter outside.

The stricken man continues to hold his head as he attempts to stand up, with his friends bursting into laughter when they realise he isn’t badly hurt.

The man then limps into the back room as the short clip comes to an end.

The video, taken at almost 11am, was posted with the caption: ‘When the staff runs out to greet visitors to the hair salon.’