The Germany city of Hannover has become the first big city to ban hot water and central heating in public buildings in response to Vladimir Putin’s weaponizing of gas supplies.

The drastic step comes as Germans have been told to expect sky high electricity bills and sweeping gas rationing measures that will affect their day-to-day lives.

In a sign of things to come, Hannover, the capital of Lower Saxony in the north west of the country, will cut off the hot water in public buildings, swimming pools, sports halls and gyms.

Other desperate gas-saving measures include switching off public fountains and blacking out night-time lights on major buildings such as the town hall and museums.

The city’s mayor, Belit Onay, spoke of an ‘imminent gas shortage’ that meant they had to reduce the city’s energy consumption by 15 per cent.

The panic among European states – especially Germany – will likely come as music to Putin’s ears, as he is seen to be using energy supplies as retaliation for countries that have supported Ukraine after he warmonger in the Kremlin’s invasion.

The plans call for shutting off heating within public buildings between April and September each year, and thermostats set at just 20C (68F) for the rest of the year, although there will be some exemptions. 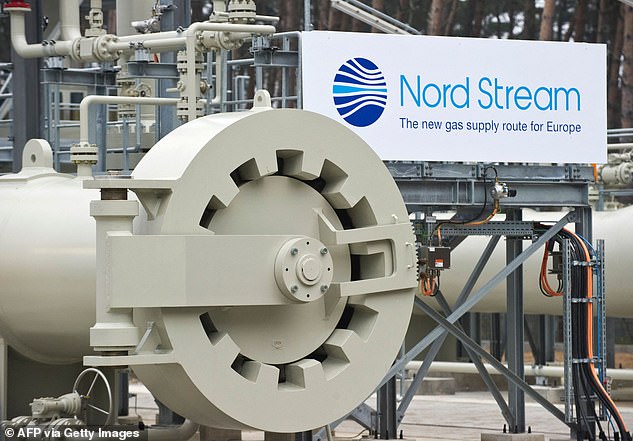 Germany imports more than half of is gas from Russia in a typical year. The vast majority of that gas arrived via Nord Stream 1, a pipeline that Moscow is now throttling it is thought in efforts to punish Germany for its support of Ukraine

There will also be a ban on portable air conditioners, heaters and radiators among the general populace as the average German begins to pay a price for standing up to the Russian dictator.

Germany, like most of Europe, has been enjoying a hot summer which should soften the blow of the cold showers, but public officials are introducing the measures now in fear of what awaits them when the season turns.

Gazprom, the Russian state energy giant, has been giving European leaders sleepless nights recently by disrupting the flow of gas via its Nord Stream 1 pipe line.

They cut the flow to 40 per cent in June, citing maintenance issues, and this week they reduced the gas supply through the pipe to just 20 per cent.

In response, European Union countries agreed to a controversial, bloc-wide 15 per cent reduction in gas usage on Tuesday that is hoped will reduce the pressure on European countries most vulnerable to Russian energy blackmail.

Germany is one of the countries most reliant on Russia for its gas supply. The country has been racing to fill its gas storage reservoirs ahead of the winter.

Plans to shield households from shocking price hikes are quietly being shelved in an effort to protect energy companies from absorbing the costs themselves and going bust.

‘We can’t say yet how much gas will cost in November, but the bitter news is it’s definitely a few hundred euros per household,’ said Economy Minister Robert Habeck.

Even this number might be optimistic, with some fearing that German bill payers could see an extra €500 (£420) added a year by the Russian gas squeeze.