BREAKING: Prince Harry and Meghan Markle leave Canada and set up home in LA amid the coronavirus crisis and flew by private jet to California before Trump closed the border

Prince Harry and Meghan Markle have left Canada for good to set up a permanent home in to California, according to reports.

The couple along with 10-month-old son Archie are said to have flown to the United States by private jet before Donald Trump closed the border.

A source told The Sun: ‘The borders were closing and flights were stopping. They had to get out.’

Harry and Meghan are said to want to be close to ‘their new team of Hollywood agents and PRs’. The source added: ‘Meghan has lots of friends there and, of course, her mum Doria.’

The had been holed up at their Vancouver Island waterfront mansion amid the coronavirus pandemic.

But their latest move is said to have ‘stunned and horrified’ others in the royal family after Prince Charles, 71, tested positive for coronavirus. Sources say it had been hoped that they might return to Britain amid the pandemic. 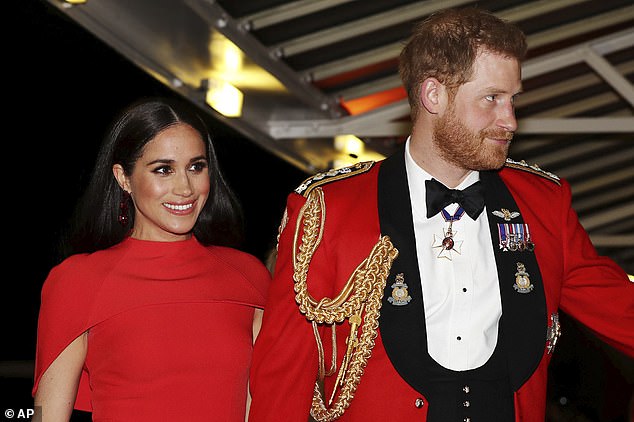 Prince Harry and Meghan Markle have left Canada for good to set up a permanent home in to California , according to reports. The couple are pictured in March

The news comes on the same day a trailer for Meghan’s first job since the couple stepped back as senior royals was released.

The Duchess of Sussex, 38, will voice a Disney documentary on elephants with her fee for the project is going entirely to the Elephants Without Borders charity – an organisation dedicated to conserving wildlife and helps protect the animals from poaching.

Meghan agreed to do the voiceover after a direct request from filmmakers, and it is understood that she recorded it in London this autumn after seeing footage of the documentary.

A trailer for Elephant failed to give fans a glimpse of Meghan’s narration – but it did reveal that the story follows a ‘family’s extraordinary 1,000 mile journey across Africa on an adventure that will change their lives’.

It comes after the Duke of Sussex, 35, was filmed touting his wife’s voiceover skills to Disney boss Bob Iger at the UK premier of Lion King in July.

Prince Harry pointed to his wife and said: ‘You do know she does voiceovers?’ A surprised Mr Iger replies: ‘I did not know that’, before Harry continues: ‘You seem surprised, she’s really interested’.

The Disney boss says: ‘We’d love to try. That’s a great idea,’ while Meghan, who was next to Prince Harry, continues speaking to Beyonce.

Meghan gave up a career as an actress – with her most prominent role being is US legal drama Suits – when becoming engaged to Prince Harry in 2017.

The Duke and Duchess of Sussex will officially end their roles as senior royals on March 31 as they ‘work to become financially independent’.