The outstanding reporting of journalists from The Sydney Morning Herald and The Age is being recognised with 14 of the mastheads’ reporters, photographers and cartoonists named as finalists in the 10th annual Kennedy Awards for Excellence in Journalism.

Investigative journalist Kate McClymont is nominated for three awards, including the $25,000 Kennedy Prize for Journalist of the Year, along with gongs for crime reporting and finance reporting that she shares with Lucy Cormack, Adele Ferguson and The Australian Financial Review’s Neil Chenoweth. 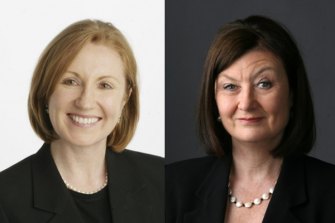 Kate McClymont and Adele Ferguson are among the Fairfax journalists who have been named as finalists in the 2016 Kennedy Awards.Credit:Fairfax Media

Eryk Bagshaw and Anthony Galloway are also nominated, along with Nine News’ Jonathan Kearsley, for their outstanding foreign affairs reporting on China.

Samantha Hutchinson and Stephen Brook are nominated for their CBD column, while education reporter Natassia Chrysanthos is a finalist in the Young Journalist of the Year category.

Both The Age’s Damien Ratcliffe and The Herald’s Chris Roots are vying for the Outstanding Racing Writer gong.

And in images, Louise Kennerley is nominated for her news photography, while Louie Douvis is a finalist for his portraiture. Cathy Wilcox is a finalist in the illustration and cartoon category.

Kennedy Foundation chair Rocco Fazzari said the field of reporting from 2020/2021 was a formidable test for adjudicators.

“In a really big news year the standard of submissions was exceptional,” Mr Fazzari said.

“The work of our 70 judges was really cut out for them this year and the Kennedy Foundation sincerely thanks them for their dedication and support.”

The awards are named after the Herald’s legendary crime reporter Les Kennedy, who passed away in 2011.

Winners will be announced at a gala ceremony on September 24 – pandemic permitting.