When Karrina Kemp shared her story about being stranded outside Queensland, she had already spent three weeks in a tent in northern NSW with her three children – and there was no end in sight.

Ms Kemp is now set to go home on Sunday and she and her children have spent the week in far greater comfort, thanks to the kindness of Herald readers and a grant from the NSW government. 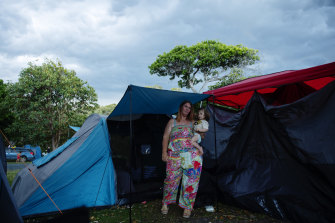 Karrina Kemp and her three children spent three weeks living in a tent while waiting to be allowed across the Queensland border.Credit:Elise Derwin

“I literally just cried when people were offering help,” Ms Kemp said. “I had no inkling and wasn’t trying to get that at all. We were just wanting to get our story out there and let people know what’s happening.”

As reported in The Sun-Herald, Ms Kemp and her children were among 11,000 Queenslanders stuck outside the state during the hard border closure to NSW and Victoria because of COVID-19 outbreaks in the southern states. She was one of several people who told this masthead they were sleeping in tents or cars as a result.

The NSW Department of Communities and Justice paid for the family to spend three nights in a basic hotel this week and Herald reader Cathy Beadnell from near Ballina helped them pay for several nights in a cabin. Discovery Parks Ballina also upgraded the family to a better cabin.

A department spokesperson said the grant came from a temporary accommodation fund for people facing homelessness and was not specific to COVID-19, though the budget was increased at the start of the pandemic. The Queensland government does not have specific assistance for people stuck outside Queensland, but people can apply for a waiver of hotel quarantine fees on hardship grounds once they get their bill.

After waiting nearly a month, Ms Kemp received her border pass from Queensland Police last Friday afternoon. This means the family can return to Queensland this Sunday, flying from Ballina to Brisbane via Sydney and leaving their car to be towed later.

However, they will still have to complete two weeks of hotel quarantine – at a cost of more than $5000 unless they are given a waiver – in Brisbane before they make it to Bundaberg at the end of the month.

Ms Beadnell said she felt strongly that an injustice had been done to Ms Kemp and her children and wanted to help.

“I really support efforts to keep everyone safe during COVID but failing to provide support to people in her situation and on compassionate grounds is just a travesty,” Ms Beadnell said.

“Seems it’s OK for football games to go ahead and certain people to be exempt from the rules but not the most disadvantaged.”

Since the publication of the article, Queensland Health has announced it will start a trial of home quarantine next week, for up to 1000 returning residents who have already applied for border passes.

Ms Kemp and her three children, aged 13, 12 and 18 months, had spent the ski season renting a cottage from friends in Jindabyne. Ms Kemp had planned to work as a cleaner for hotels and ski lodges but work dried up because of the pandemic.

They had to leave their accommodation when the property sold and the new owner helped with relocation costs. They drove north to Ballina while they waited for a border pass. The $360 a week for the tent park was all she could afford on top of the $585 a week she was already paying for her home in Bundaberg, and she has had to take out loans from payday lenders to cover the cost of the airline tickets and car towing.

“I got flak for leaving Queensland and going to a ‘rival state’,” she said. “I don’t see it like that. I see it as Australia.”

Another Herald reader also offered for the Kemp family to camp on their property in Glen Innes for free, and while Ms Kemp won’t take this up, she is grateful.

Meanwhile, another Herald reader offered to host Katrina Haslam, the other case study in the story who is pregnant in Sydney separated from her partner in Brisbane and can no longer work.

In need of some good news? The Greater Good newsletter delivers stories to your inbox to brighten your outlook. Sign up here.