Elderly woman, 80, trapped inside her car is rescued by police – just moments before fast-flowing floodwaters push her small Hyundai into a raging river

An elderly woman has been rescued by police from deep floodwaters on the NSW Central Coast shortly before her car was swept into a river.

The 80-year-old woman became stuck in her car in floodwaters along River Road at Wyong on Sunday afternoon.

Police spotted the half-submerged Hyundai Getz while attending to another incident nearby and realised the driver was still inside. 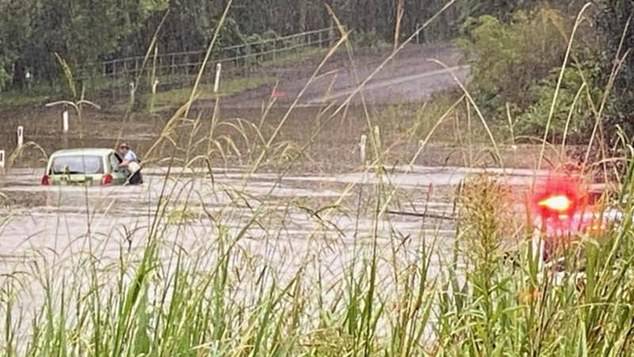 One officer waded out into the waters on foot and was able to free the woman from the car and walk her out to safety.

The car was then pushed by the fast-flowing waters into the nearby Wyong River.

Neither the driver or the officer were injured.

The incident sparked a warning from police urging people not to drive on roads that are submerged by floodwaters.

NSW is battling floods across the state in what authorities say is the most serious rain event in decades.