A £35 million conservation project to renovate HMS Victory which will include replacing rotting planks has been announced on the 100th anniversary of the warship being brought into dry dock.

Vice-Admiral Lord Nelson’s flagship was brought into dry dock 2 at Portsmouth Historic Dockyard 100 years ago, where it has remained as the world’s oldest commissioned warship and the flagship of the First Sea Lord and Chief of the Naval Staff.

A dockyard spokeswoman said that dry dock 2, which is 220 years old, is itself a scheduled ancient monument. 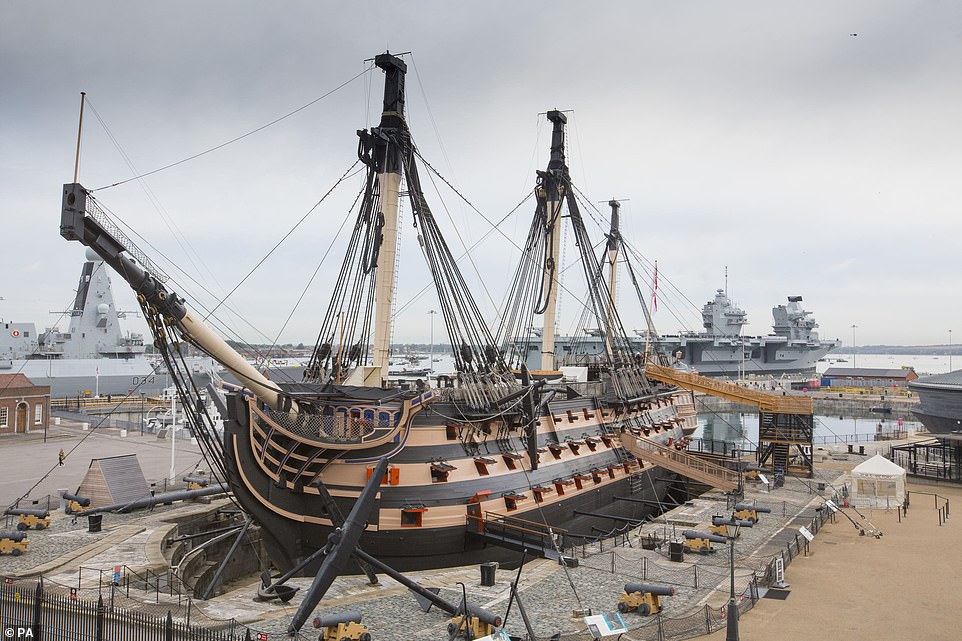 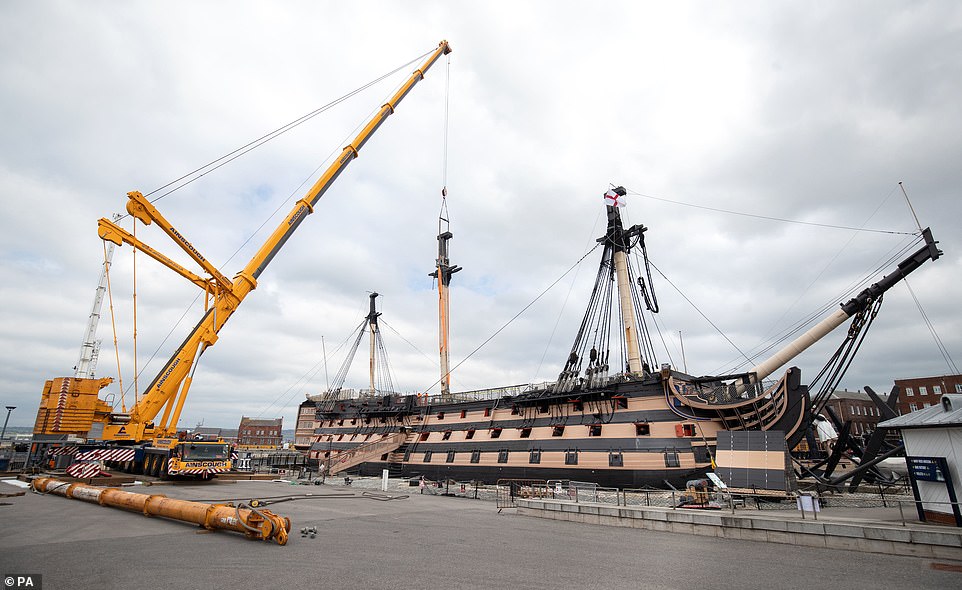 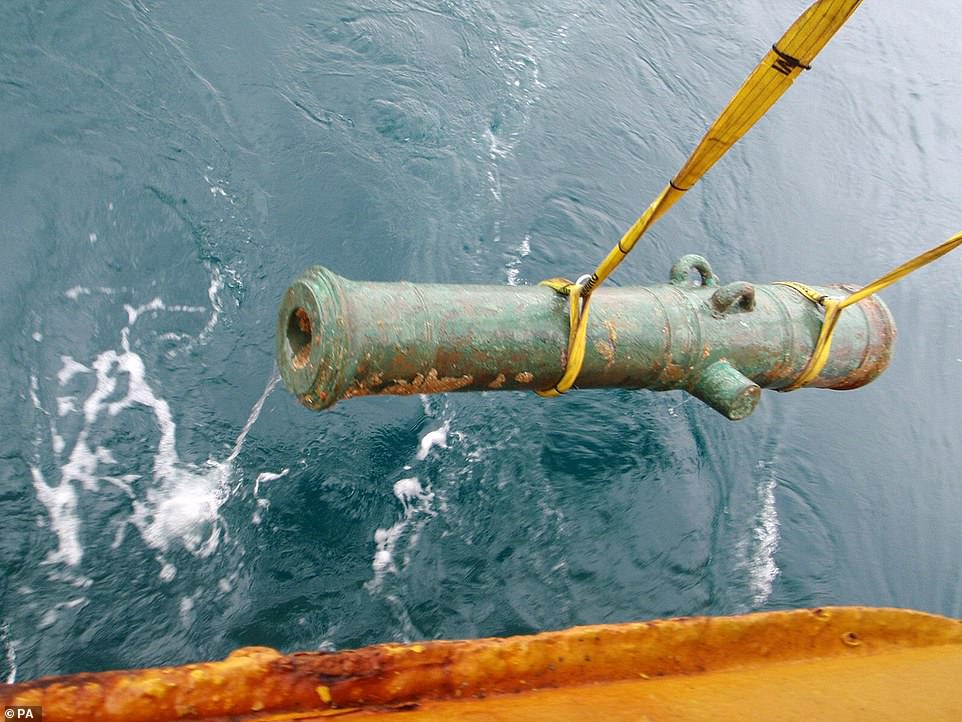 Admiral Lord Nelson’s famous signal, ‘England expects,’ flying from the significantly reduced rigging of HMS Victory to mark the 206th anniversary of victory at the Battle of Trafalgar back on 2011 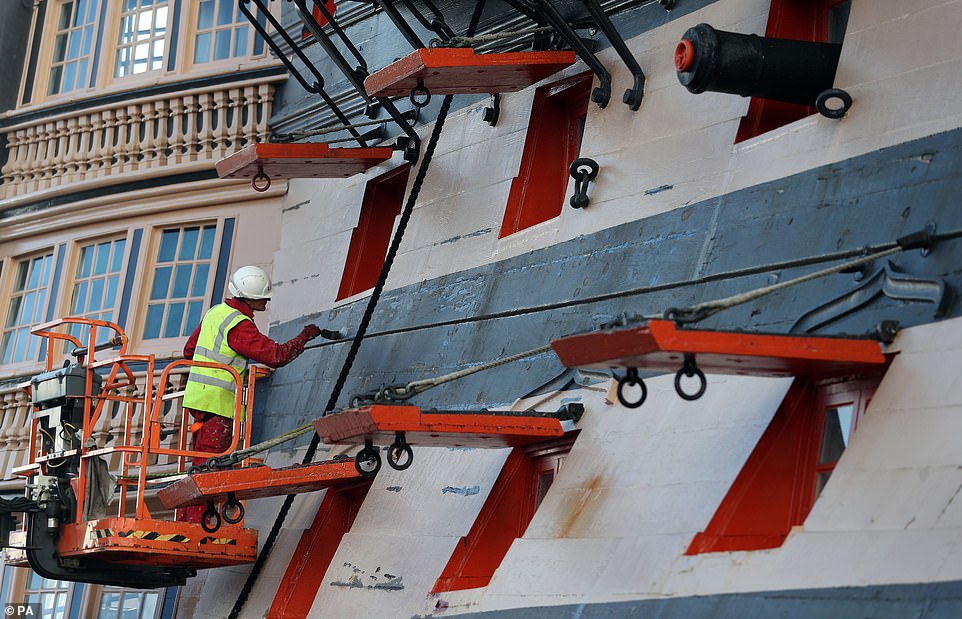 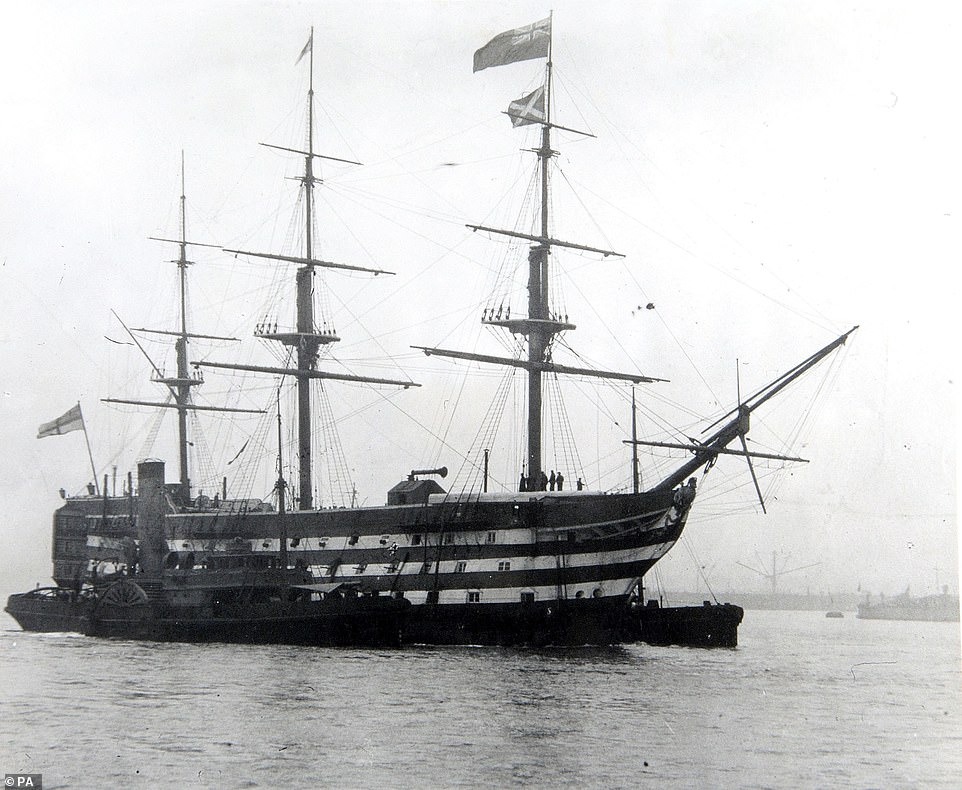 HMS Victory being taken in tow by steam tug dry dock no. 2 at Portsmouth Historic Dockyard 100 years ago in January 1922

She said: ‘One hundred years ago today, on January 12 1922, the world watched as Vice-Admiral Lord Nelson’s celebrated survivor from the Battle of Trafalgar was towed from her berth in Portsmouth Harbour and secured into the dry dock.

‘First floated out at Chatham in 1765, Victory enjoyed a varied career but by the 1920s was in poor condition and at risk of sinking at her mooring without considerable intervention.

‘Later in 1922, on October 21st, Trafalgar Day, the ‘Save the Victory’ campaign by the Society for Nautical Research was publicly launched and continues to play a hugely significant role in securing the world-famous flagship for posterity. 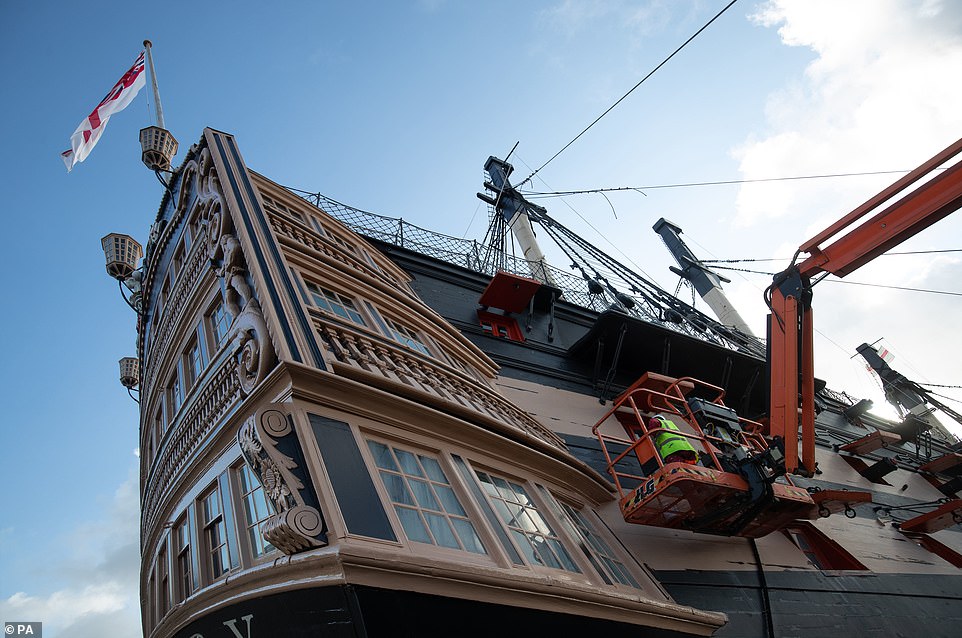 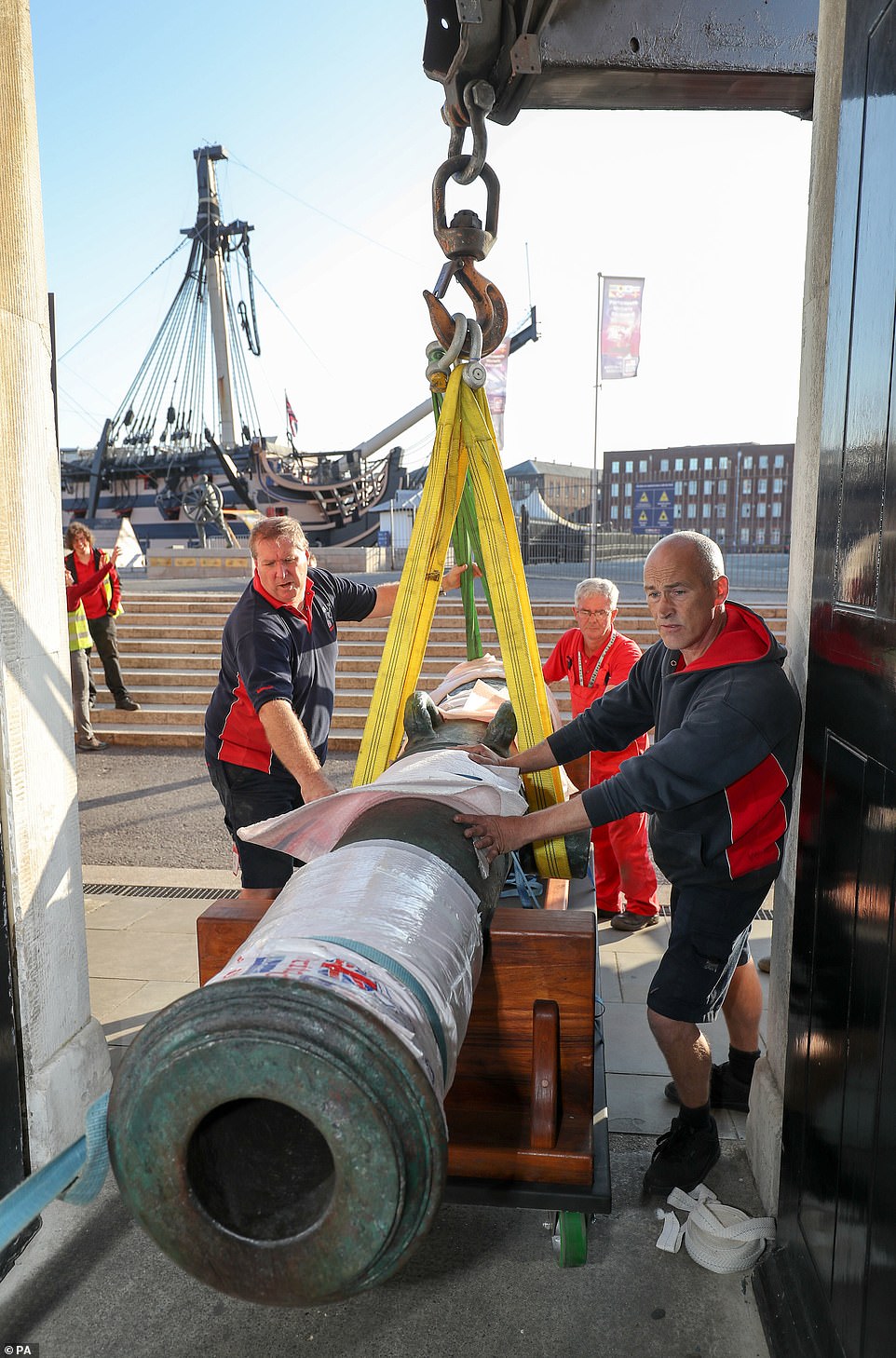 Workmen moving a 42-pound cannon into position, which was the first artefact from the HMS Victory 1744 wreck site to be shown to the public at the National Museum of the Royal Navy in Portsmouth Historic Dockyard 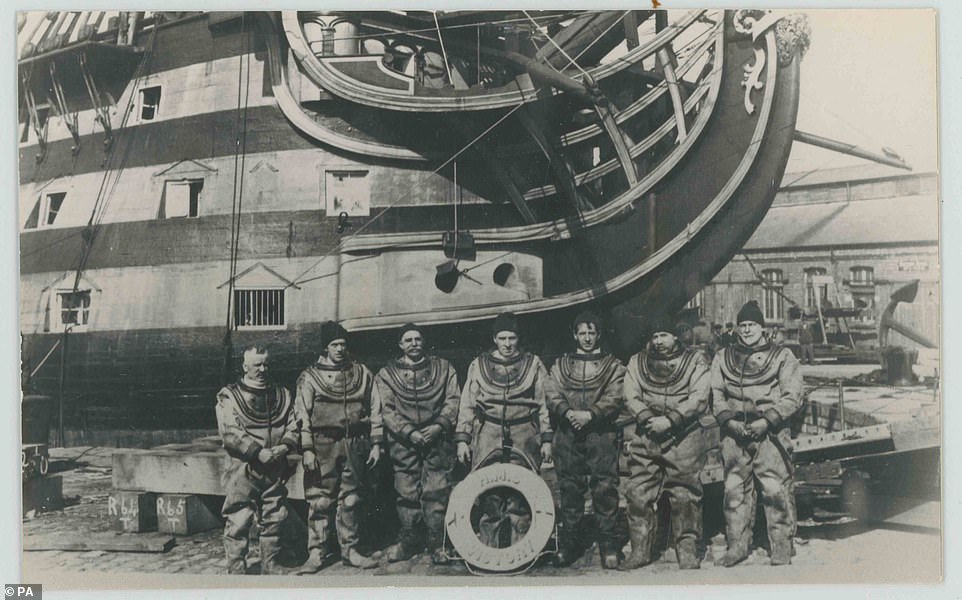 Divers with HMS Victory in dry dock no. 2 at Portsmouth Historic Dockyard in 1925. A century after HMS Victory was moved into her final resting place 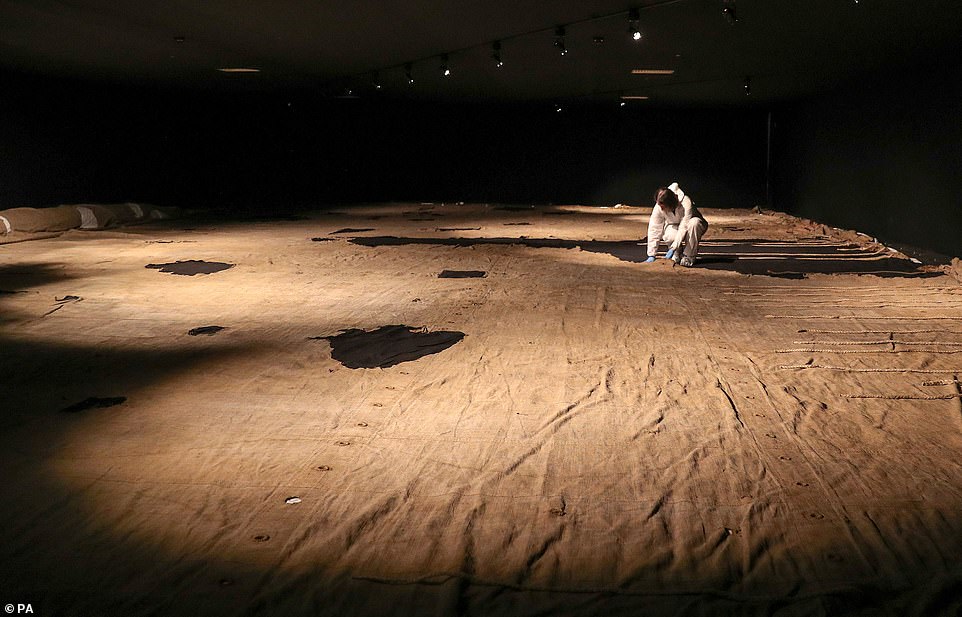 Diana Davis, senior conservator at the National Museum of the Royal Navy, tends to the Trafalgar sail, the only surviving foretopsail flown by HMS Victory at the battle of Trafalgar 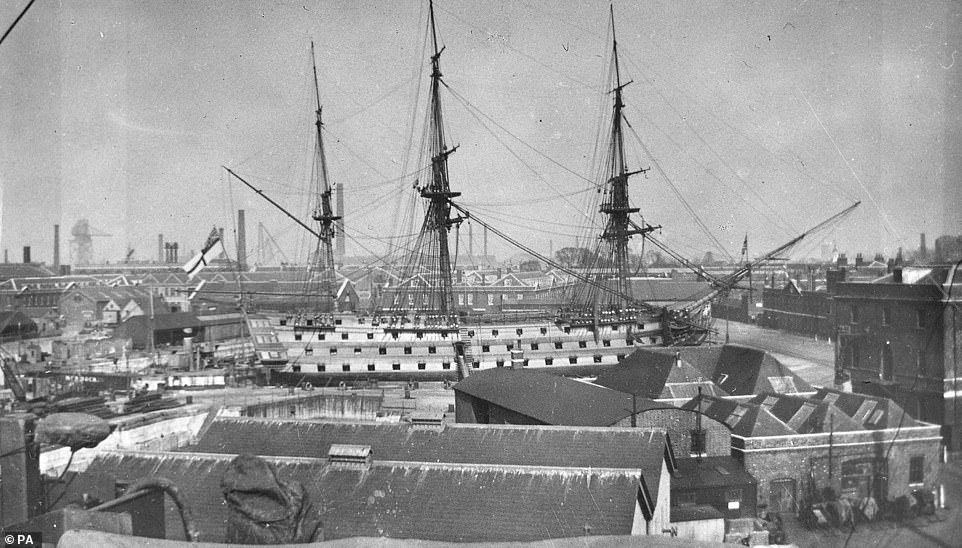 HMS Victory in dry dock no. 2 at Portsmouth Historic Dockyard circa 1928 rising high above all the surrounding buildings 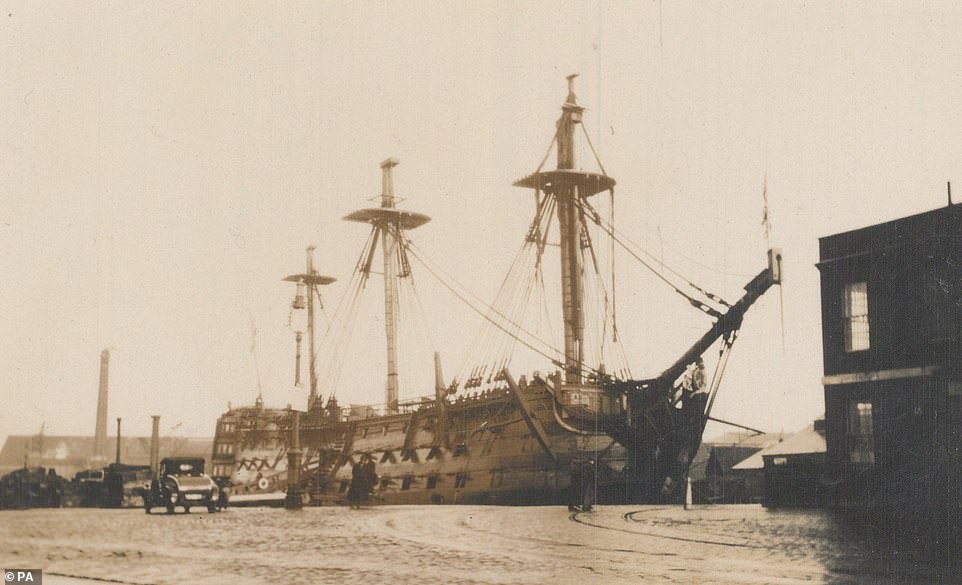 On January 12 1922 Vice Admiral Lord Nelson’s flagship was brought to dry dock no.2 at Portsmouth Historic Dockyard where it has remained as the world’s oldest commissioned warship and the flagship of the First Sea Lord and Chief of Naval Staff

1778 – First Commission. Flagship of Admiral Keppel in action with d’Orvilliers off Ushant.

1782 – Flagship of Lord Howe. Present at sinking of the Royal George at Spithead; boats from Victory used to save survivors. Relief of Gibraltar.

1797 – Battle of Cape St Vincent, nearly wrecked in Lagos Bay. Blockade of Cadiz. Paid off and struck from Navy List.

1903 – Rammed by HMS Neptune and docked to prevent sinking. After repair, returned to harbour mooring.

1922 – Berthed in No 2 Dock. ‘Save the Victory’ launched for her restoration and preservation to her Trafalgar condition.

1946 – Personal standard of HRH Princess Elizabeth broken at the main.

‘Although Victory had been a popular tourist attraction when berthed in the harbour throughout the 19th century, she was opened as a museum ship to the public by King George V on July 17 1928 and has since welcomed more than 30 million visitors.

‘Since then, she has welcomed a host of famous visitors including royalty at dinners and balls, and survived a 500lb bomb dropped by the German Luftwaffe during the Second World War.

‘The dry dock itself is now part of a greatly enhanced visitor offer for Victory which, in addition to a self-guided tour of the ship, now includes the chance to descend into the dry dock under the enormous hull on a dedicated walkway, weaving through the recently completed and new state-of-the-art support system.’

Victory has been undergoing a 20-year period of conservation including recently having its mast removed, with the next stage of works now being unveiled.

The spokeswoman said: ‘Rotting planking will be removed from the hull and replaced with new oak, repairs made to the ship’s structural framework, and she will be fully re-rigged, in a process lasting 10 to 15 years and costing £35 million.

‘The project will provide visitors with a once-in-a-generation opportunity to see beneath Victory’s skin and experience a first-rate line-of-battle ship being taken through a great repair.’

HMS Victory first floated out from the Old Single Dock in Chatham’s Royal Dockyard on May 7 1765.

During 206 years in service she would gain recognition for leading fleets in the American War of Independence, the French Revolutionary War and the Napoleonic War.

HMS Victory is renowned for being the flagship of Vice-Admiral Horatio Nelson, Britain’s most celebrated naval leader, fighting in the defeat of the French and the Spanish at the Battle of Trafalgar in 1805.

However, her service was not to end here – in 1808 she was recommissioned to lead the fleet in the Baltic, but four years later she was relegated to harbour service – serving as a residence, flagship and tender providing accommodation.

In 1922 she was saved for the nation and placed permanently into dry dock where she remains today, visited by 25 million visitors as a museum of the sailing navy and the oldest commissioned warship in the world.

The HMS Victory currently in dry dock in Portsmouth is the sixth ship to bear the name after five previous ships did so.

Of these, the first two were broken up and rebuilt, two were destroyed by fire and the fifth sank in 1744.

The current HMS Victory was launched in 1759 and commissioned in 1778.

It was used in two battles on the French island of Ushant in 1778 and 1780 as well as the battle of Cape St Vincent near Portugal in 1797.

However its decisive role came in the Battle of Trafalgar in 1805, under the captaincy of Vice-Admiral Nelson who was fatally wounded on board during the conflict.

The ship was taken out of service in 1812 and remained in Portsmouth Harbour until 1922, when it was moved into the Royal Naval Dockyard amid fears for its deteriorating condition.

Fought on October 21, 1805, the Battle of Trafalgar is one of history’s most epic sea clashes.

Not only did it see Britain eliminate the most serious threat to security in 200 years, but it also saw the death of British naval hero Admiral Lord Nelson.

This was not before his high-risk, but acutely brave strategy won arguably the most decisive victory in the Napoleonic wars. Nelson’s triumph gave Britain control of the seas and laid the foundation for Britain’s global power for more than a century.

Despite signing a peace treaty in 1803, the two nations were at war and fought each other in seas around the world.

After Spain allied with France in 1804, the newly-crowned French emperor Napoleon Bonaparte had enough ships to challenge Britain.

In October 1805, French Admiral Pierre-Charles Villeneuve led a Combined French and Spanish fleet of 33 ships from the Spanish port of Cadiz to face Nelson and Vice Admiral Cuthbert Collingwood.

Battles at sea had until then been mainly inconclusive, as to fire upon the opposing ship, each vessel had to pull up along side one another (broadside) which often resulted in equal damage.

Nelson bucked this trend by attacking the Combined Fleet line head on – and sailed perpendicular towards the fleet, exposing the British to heavy fire.

He attacked in two columns to split the Combined Fleet’s line to target the flagship of Admiral Villneuve.

11. 30am Lord Nelson famously declared that ‘England expects that every man will do his duty’, in reference to the command that the ships were instructed to think for themselves. The captains had been briefed on the battle plan three weeks before, and were trusted to bravely act on their own initiative and adapt to changing circumstances – unlike their opponents who stuck to their command.

Vice Admiral Cuthbert Collingwood led the first column and attacked the rear of the line, and broke through.

Nelson sailed directly for the head of the Combined Fleet to dissuade them from doubling back to defend the rear. But before he reached them, he changed course to attack the middle of the line – and Villeneuve’s flagship.

Speeding toward the centre of the line, HMS Victory found no space to break through as Villeneuve’s flagship was being tightly followed – forcing Nelson to ram through at close quarters.

In the heat of battle, and surrounded on three sides, Nelson was fatally shot in the chest by a well-drilled French musketeer.

The Combined Fleet’s vanguard finally began to come to the aid of Admiral Villeneuve, but British ships launch a counter-attack.

Admiral Villeneuve struck his colours along with many other ships in the Combined Fleet and surrendered.

4.30pm With the knowledge he has secured victory, but before the battle had officially concluded, Lord Nelson died.

5.30pm French ship Achille blew up signalling the end of the battle – in all 17 Combined Fleet ships surrendered.