Holidaymaker, 39, is killed by great white shark in shallow water off coast of South Africa during early morning swim to celebrate bank holiday

A screaming woman was killed in a horrific attack by a Great White Shark as she took an early morning dip this morning while celebrating a Bank Holiday weekend.

The 39-year-old victim was in shallow water when the deadly predator came in fast from deep water and grabbed her in its jaws close to fellow swimmers.

The woman who was on the edge of the group let out a scream as the shark hit her and bit into her flash and disappeared under the water.

The National Sea Rescue Institute was called as screaming swimmers and surfers cleared the water at Central Beach, Plettenberg Bay, South Africa, just before 8am.

An NSRI inshore rescue craft was launched and sped to the scene and quickly found the savaged body of the blood-soaked woman about 50 feet out from shore. 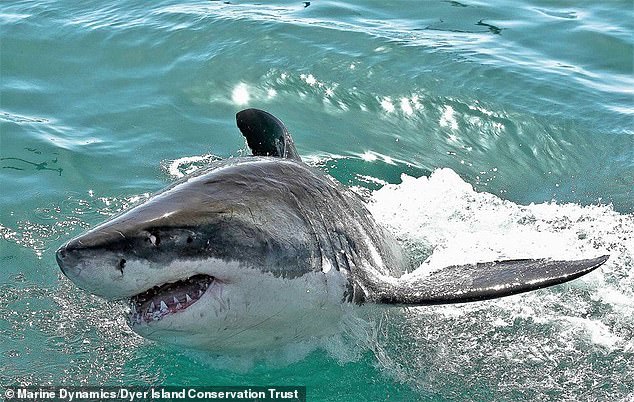 A screaming woman was killed in a horrific attack by a Great White Shark this morning at Central Beach, Plettenberg Bay in South Africa. Picture: file image

The Bitou Municipality which oversees the beach shut down the Bay and has put up signs and posted volunteers to warn people to stay out of the water.

The woman who was believed to be on holiday was the third to be viciously attacked and killed by a Great White Shark in Plettenberg Bay in the past 11 years.

An eye witness told rescuers: ‘It was a bit cloudy but there was some sun out and there were quite a few people taking an early dip as the temperature was quite warm.

‘Then I just heard lots of screaming and saw people running out the water. I guessed it was a shark attack but I was quite a way away and then the lifeboat turned up. 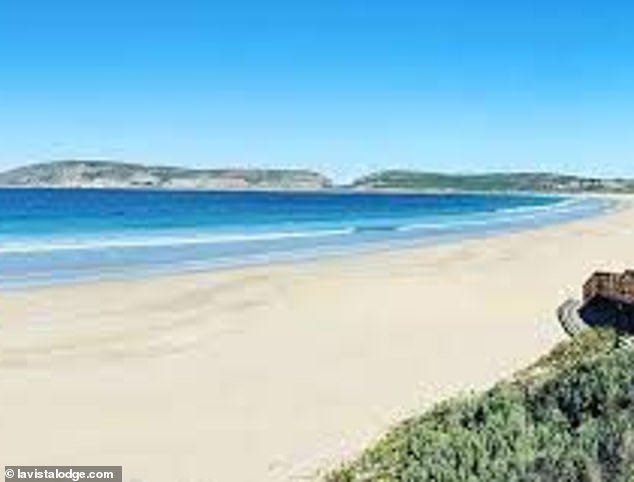 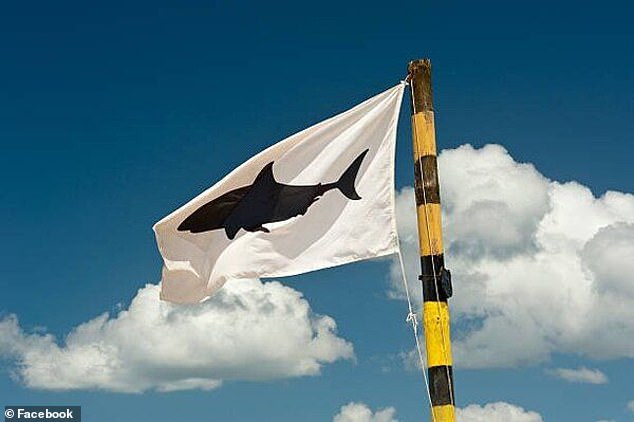 The Bitou Municipality which oversees the beach shut down the Bay and has put up signs and posted volunteers to warn people to stay out of the water. A South African warning flag at a beach at Plettenberg Bay

‘I then heard a woman had been attacked while swimming only two or three waves out so it was quite shallow but it was said nothing could be done to help her’ she said.

And in 2011 local carpenter and keen surfer Tim Van Heerden was on his board when a Great White Shark attacked while he was waiting to catch a wave.

It badly bit him in the attack and he was knocked into the sea and as he grabbed his board the Great White tore into him a second time with a final and fatal bite.

Despite a brave pal grabbing him and getting him onto rocks he had suffered two massive bite wounds to his groin and upper leg which severed the femoral artery. 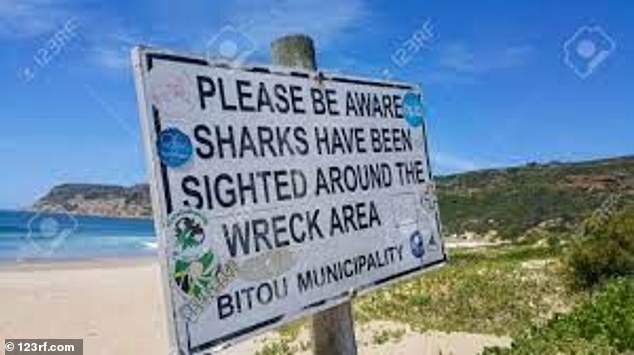 A witness ‘heard people screaming’ and saw people running out of the water. Pictured: A sign warning people about the sharks

Bitou Municipality Mayor David Swart said: ‘We have never had a fatality at Plettenberg until 2011 and now we have had three with two in the last three months.

‘We are researching into and looking at putting up a shark barrier and increased warning signage and starting our lifeguard’s season a month earlier than usual.

‘There seems to be no change in the shark’s behaviour in this area so it is a bit of a mystery why we have had three fatal attacks in such a short space of time.

‘Our thoughts go out to the woman and her family at this time’ he said.

In South Africa yesterday was a Bank Holiday for Heritage Day and traditionally it is a time for a long weekend break away to celebrate with family and friends. 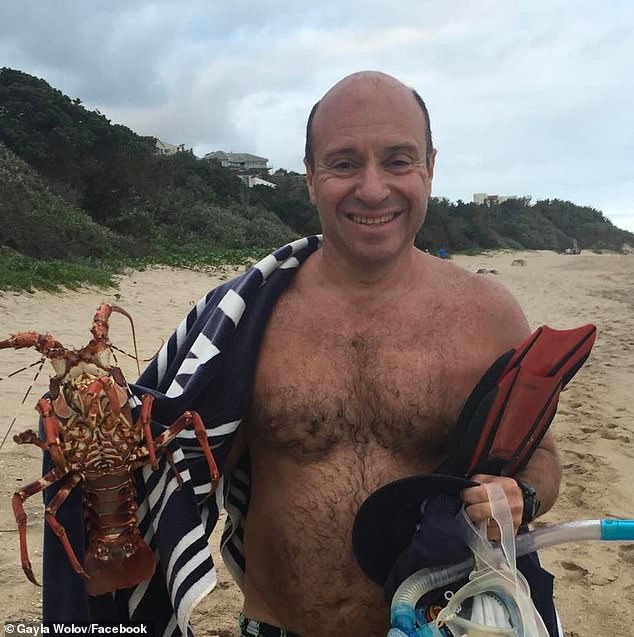 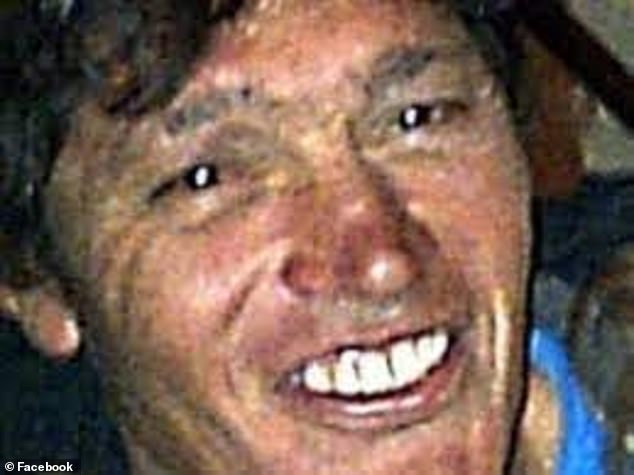 Her badly bitten body has been handed to forensic pathologists and the police for an inquest docket to be made while her next of kin are all made aware.

Great White Sharks can grow up to 20 feet long and weigh up to 2 tonnes and have up to 300 razor sharp serrated teeth arranged in rows in its giant jaws.

The predator when attacking can swim at up to 35mph guided by an extremely powerful sense of smell but normally prey on seals, sea lions, dolphins and turtles.

Humans are often mistaken for seals especially when wearing wet suits and attacks are said by experts not to be intentional but ‘experimental’ when they bite.

They usually move away after biting once when they realise the human is not their natural prey but the damage done by just one powerful bite is often fatal.

In the last 25 years 37 people have been killed in shark attacks off South Africa and going back as far as 1950 the figure rises to 66 who have fallen victim to their jaws.

Shark activity along the Garden Route from Port Elizabeth to Cape Town increases in winter due to the annual sardine run – an important food source for a long period. 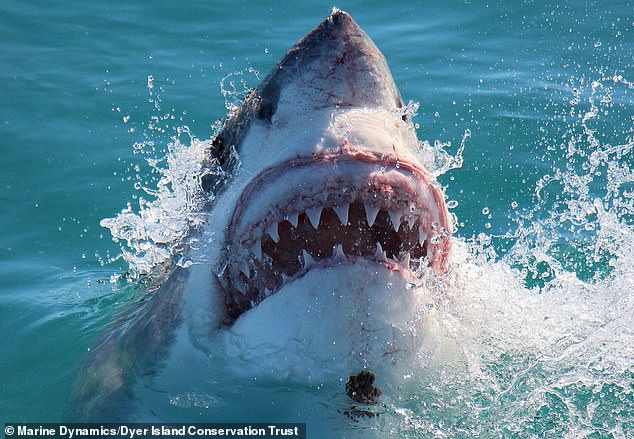 Great White Sharks can grow up to 20 feet long and weigh up to 2 tonnes and have up to 300 razor sharp serrated teeth arranged in rows in its giant jaws. Picture: file image

A South African shark expert, who asked not to be named, said: ‘You have to remember the ocean has always been the territory of the shark – they rule.

‘There are more and more people in the water these days what with surfing and paddle boarding and swimming and the sharks are always never very far away.

‘But they are not seeking out humans and attacks are rare and usually not intended as they mistake humans for prey but the results are often fatal.