Beijing: The young murder suspect who sparked the Hong Kong extradition bill crisis has left jail accompanied by his Anglican pastor and asked for the Hong Kong people to forgive him.

As the Hong Kong and Taiwan governments feud over how to arrange his surrender to Taiwan to face murder charges, Chan Tong-kai, 20, bowed before television cameras to apologise to the family of his dead girlfriend. 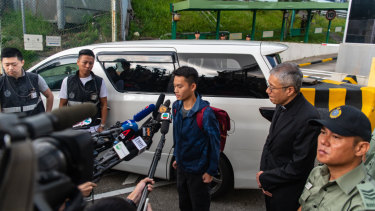 Chan Tong-kai talks to the media as he is released from prison on Wednesday.Credit:Getty Images

"To the society, to Hong Kongers, I can only say sorry," he said outside Hong Kong's Pik Uk Prison on Wednesday.

The Reverend Peter Koon, who has been visiting Chan in prison for six months, revealed he counselled him to surrender to seek atonement, and had earlier flown to Taiwan to hire a lawyer for Chan.

Chan had been serving a prison sentence for money laundering, the only charge Hong Kong prosecutors had evidence to bring against him, after he murdered his girlfriend in Taiwan and then fled.

Hong Kong chief executive Carrie Lam sought to introduce an extradition bill to deal with the case, but this sparked the protest movement, amid fears the bill would also allow extradition to mainland China.

In an interview with the Chinese newspaper Global Times, Koon said: "I think that Chan must feel guilty for the Hong Kong people because his case caused the [extradition] amendment storm." 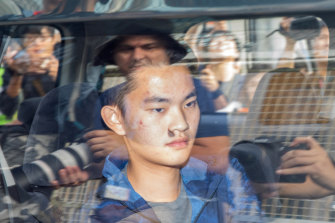 Chan and his girlfriend had attended Anglican schools, and Koon said he wanted to accompany Chan to Taiwan because "I have this responsibility for him".

"I invited the Taiwan lawyer to come to Hong Kong to contact Chan. About a month ago, he finally agreed to go to Taiwan to surrender and asked me to arrange it."

Hong Kong security minister John Lee on Wednesday blasted Taiwanese authorities for making contradictory demands since Chan wrote to the government on Friday to say he would surrender.

Lee said Hong Kong would not accept Taiwanese police officers arriving in Hong Kong to escort Chan because it was "utterly disrespectful to Hong Kong's jurisdiction".

China does not recognise Taiwan as a separate country.

Hong Kong has called on Taiwan to lift a landing restriction on Chan, so he can travel to Taiwan voluntarily. Taiwan has demanded Hong Kong authorities keep Chan in detention.

Koon said he had originally planned to fly to Taiwan with Chan on the same day as his release, but they had to cancel their tickets.

Taiwan's foreign minister Jospeh Wu said in a tweet: "Hong Kong authorities set Chan Tong-kai free to prove extradition to China is right. Wrong! He's a murder suspect and must be brought to justice via judicial cooperation with Taiwan, not letting him travel like a tourist."

Wu said that Taiwan "refuses to let Lam and China mess with Taiwan".