Beijing: Three politicians who had been elected to Hong Kong's parliament by popular vote were arrested by police on Friday night as Carrie Lam's government moved against democracy voices to stop protests. 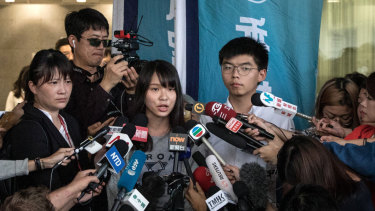 Hong Kong pro-democracy activists Agnes Chow and Joshua Wong speak to the media after being arrested and released on bail yesterday in Hong Kong.Credit:Getty

Around two dozen pro-democracy politicians in the Legislative Council had been working tirelessly over the past three months to try to calm protesters and reason with police on protest frontlines, because they said they want to avoid violence.

But as police ramped up pressure on Friday with a swathe of arrests, Civic Party's Jeremy Tam, a former Cathay Pacific pilot, was taken into custody for obstructing police officers at a protest march last month.

Another Legislative Council member, Au Nok-hin, was arrested for assaulting police with a loudspeaker at a Mong Kok protest, and Cheng Chung-tai of Civic Passion was also detained by police.

The vice chairman of the Democratic Party, Lo Kin-hei, wrote on social media that opposition party legislators had gone to protest frontlines because they saw it was "carrying out their duty to monitor the use of force, and to minimise the conflicts between police and protesters". 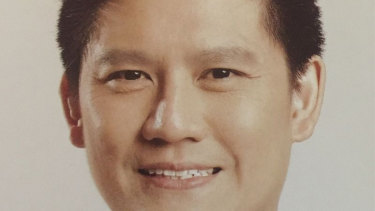 Politicians interviewed by The Sydney Morning Herald and The Age in July said it was "twisted" that after 2 million people had marched in the streets, neither Carrie Lam nor any of her cabinet ministers had resigned, as would occur in most democracies. It was therefore the duty of Hong Kong politicians "to ensure things don't turn ugly" on the protest frontlines, they said.

Wong said it was "completely ridiculous" for police to target leaders from a previous social movement to frame them as leaders of the extradition bill protests.

This year's protesters have described themselves as leaderless, and say they organise as a community through online platforms where ideas are voted up or down.

Pro-democracy politicians have also denied they are protest leaders.

The arrest of the prominent democracy voices, and the complete ban on a planned rally on Saturday, was viewed as an attempt to stop Hong Kong people coming out to the streets to mark the anniversary of Beijing refusing to grant universal suffrage for leadership elections.

Police warned that anyone attending the planned march on Saturday could be arrested, and also warned protesters against seeking legal loopholes for assemblies, such as religious gatherings which are exempt from public order laws.

Over 900 people have been arrested since protests began in June.