A homeowner had the fright of her life when she found a seven-inch, eight-legged spider-like creature on her kitchen wall.

Alina, 25, said she froze when she spotted the creepy arachnid splaying its legs next to her doorframe while going to get a drink.

The software technician from Cambridge, said: ‘It made me feel itchy and a little bit disgusted.’

While the insect resembles a spider, it is actually a harvestman – also commonly referred to as a daddy long legs. 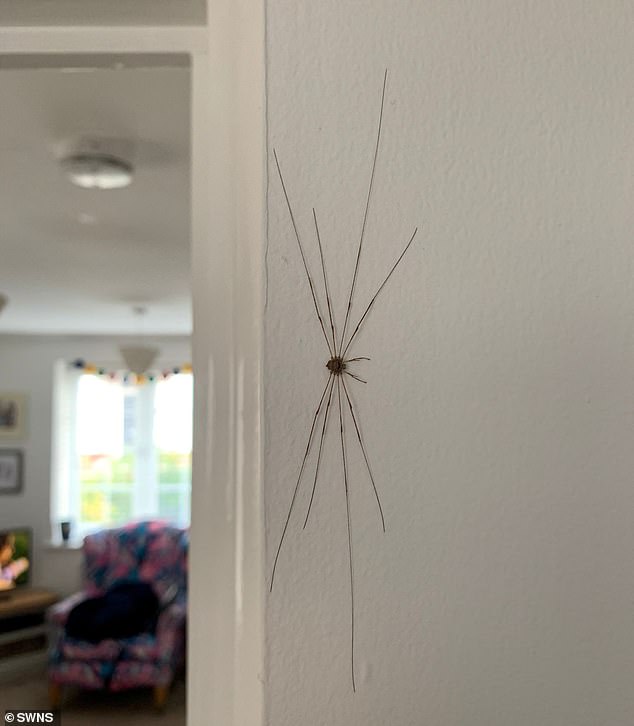 Alina saw the creature, roughly seven-inches in diameter, splayed across the wall in her Cambridge home

‘I went into the kitchen to get a drink, was watching the birds out of the window and then turned around and suddenly noticed it.

Seen a giant insect in your home?

‘I don’t know how long it had been there or where it came from, but it scared the life out of me and made me feel very itchy.

‘It must’ve been about seven inches long!

‘I froze and called my partner’s name – I didn’t want to get too close to it in case it moved.

‘We live in a fairly rural area next to quite a lot of fields so we get a lot of spiders and crawly things but I’d never seen anything like this before.

‘I’m glad to read they’re harmless but I certainly don’t want to see one in my house again!’

Harvestman are similar to spiders but cannot spin a web or produce venom.

Their most striking feature is the eight spindly legs attached to their small round bodies.

They vary in length, with the two middle appendages longer than the rest.

Alina uploaded the image to social media yesterday, alongside the caption ‘WHAT is this?!’

The post has gained significant attention, attracting over 1,500 likes and 400 comments so far, with users in disbelief at the insect’s beastly proportions.

It has since been captured by Alina’s partner Connor and released into the wild. 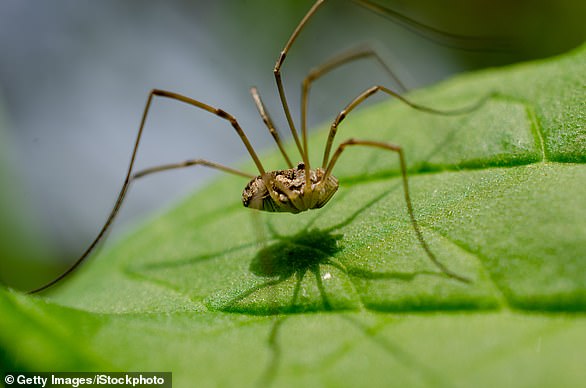 Harvestmen, better known as daddy long legs, are more closely related to scorpions than they are spiders.

Unlike a spider, harvestmen don’t have a constricted area between the two sections of their body.

Their bodies are broadly joined so it looks like an oval body shape with legs coming off.

They have fangs, like a spider, but they don’t produce venom.

When a spider feeds they inject venom into their prey to help to break it down, harvestmen grab their prey while it’s alive.

They are usually found in clusters.

Scientists think that clusters could make them look larger to put off predators and possibly for warmth.

Harvestmen defend themselves by secreting a foul-smelling fluid.