Thirty-four Sydneysiders have coughed up $1830 a year for unlimited parking at Bondi and Bronte beach car parks.

That’s the going rate for a beach parking permit from Waverley Council if you don’t live or pay rates in the area. A further 5000 people pay the locals-only price $165 a year.

It usually costs $9.50 an hour to park at Bondi and $7 an hour at Bronte unless you find free spaces on the backstreets.

The same day at La Perouse, some people removed fencing and parked on the grass area of the headland where families were picnicking, and someone ripped the door off the museum to use the toilets. Locals complained visitors were parking across driveways, leaving rubbish behind, and used hoses in front yards.

Bronte Beach was left covered in rubbish by thousands of revellers on Christmas Day, despite Waverley Council investing in extra rangers and patrols.

For Donnie and Mei Velasco, from Box Hill in north-west Sydney, going to the beach with their 21-month-old son takes a lot of preparation, costs a lot in parking and tolls, and is at least an hour’s drive.

“We start the day before, and so we sort of plan that we have to wake up usually before the sun rises to beat the traffic,” Velasco said. “Even then, it’s hit and miss as to whether we find parking.” 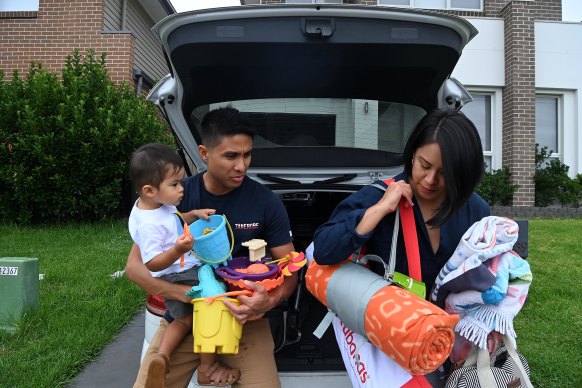 Donnie and Mei Velasco with Jonathan, 21 months, put a lot of planning and effort into going to the beach from Box Hill.Credit:Kate Geraghty

Other Sydneysiders told the Herald they had given up or found workarounds.

James See, from Summer Hill, said public transport was too hard with children and all the beach gear, so he usually drove to beaches near Wollongong. “We make an entire day of it and have dinner at a coastal town.”

Another inner west woman, who asked to be anonymous, said she and her husband, both on average salaries, scrimped and saved to buy a weekender on the Central Coast some years ago. She said it was only 10 minutes further by car than it took to take the train and bus to Bondi.

Professor Christopher Pettit, director of the City Futures Research Centre at the University of NSW, said access to beaches was an important social equity issue.

“The beaches and the harbour in Sydney is the quintessential Sydney experience,” Pettit said. “But property prices get exponentially higher the closer you get to a beach, so it’s those who can afford multi-million dollar homes who have access.”

Pettit said the problem would worsen as Sydney adds another 2 million people in the next 20 years and suggests that the state government try to direct some of that population growth to Newcastle, the Central Coast, and Wollongong.

With much of the population growth is currently in outer-suburban areas, where average temperatures are hotter than the city, and the Western Sydney Regional Organisation of Councils is calling for more public fountains to combat the heat.

NSW Cities Minister Rob Stokes said the government had opened new natural swimming spots such as Bayview Park Baths in Concord, a pop-up pool at Prospect Reservoir and Barangaroo Cove in the city and also improved swimming areas in Lake Parramatta and the Nepean River in Campbelltown.

Waverley Council is an outlier in making the beach parking permits for Bondi and Bronte available to anyone willing to pay the price.

A Waverley spokesperson said the parking system provided fair and equitable access to its famous beaches, which ratepayers paid to maintain.

Northern Beaches Council has the most expensive parking of all Sydney beaches, at $10 an hour during summer.

The council issues two beach parking permits per property for free. They permit Manly residents to park in Palm Beach and vice versa but are not available to people from outside the LGA or transferable between vehicles.

Randwick Council does not offer permits for its two paid council car park in Coogee, but parking on the streets and other car park is free, and sometimes timed. It recently expanded the car park at South Maroubra.

All parking is free at beaches in the Sutherland Shire, but the council is trialling timed parking in parts of Cronulla to improve turnover, upsetting some residents.

Stokes said councils need to be “mindful of their social responsibility not to overcharge people to access beaches that should be accessible to everyone”.

Randwick Mayor Dylan Parker said “no amount of additional resourcing by coastal councils can seriously address the fact that on hot summer days half of Sydney wants to spend the day at the beach”. He also called on the NSW government to reverse its bus cuts.

While there are direct buses to many eastern suburbs beaches from Central and Redfern, cuts include popular bus to Balmoral from Chatswood and a bus from the inner west to Bronte that now terminates at Bondi Junction.

The Greens have a petition for a “swim bus” from Summer Hill to Dawn Fraser Baths in Balmain in the same LGA.

Some inland suburbs have chartered buses, such as Canterbury Bankstown Council offering an occasional service to Cronulla. A bus driver who grew up in Mount Druitt is also offering a cheap express bus to Bondi as a community service.

Last year Fairfield City Mayor Frank Carbone said the state government should bring in toll-free Sundays and regulate how much coastal councils can charge for parking.