Labour paedophile peer: Sex assaults on women, a dangerous driver who killed a man, an anti-Semite… So, asks GUY ADAMS, how DID Nazir Ahmed grace corridors of power for so long?

At the height of the child grooming scandal that saw more than 1,400 local girls exploited by gangs of mostly Pakistani men, Lord Ahmed of Rotherham delivered a stern, and on the face of things, quite brave critique of the community he grew up in.

‘As a proud Muslim and proud Rotherham lad, who came here from Kashmir in Pakistan with my parents aged 11, I was shocked by the disclosure of appalling sexual abuse of young girls in the town,’ he declared in a newspaper article that sought to blame mosques for ‘not doing enough to provide strong moral leadership to young British Muslims’.

In an equally controversial speech in 2012, the then Labour life peer suggested that another reason so many youngsters from South Yorkshire were growing up to become sex offenders was because their parents worked long shifts.

‘Nobody knows the reason why Asian men are exploiting young girls, but obviously they are young boys who are brought up in this country,’ a section of the speech read. 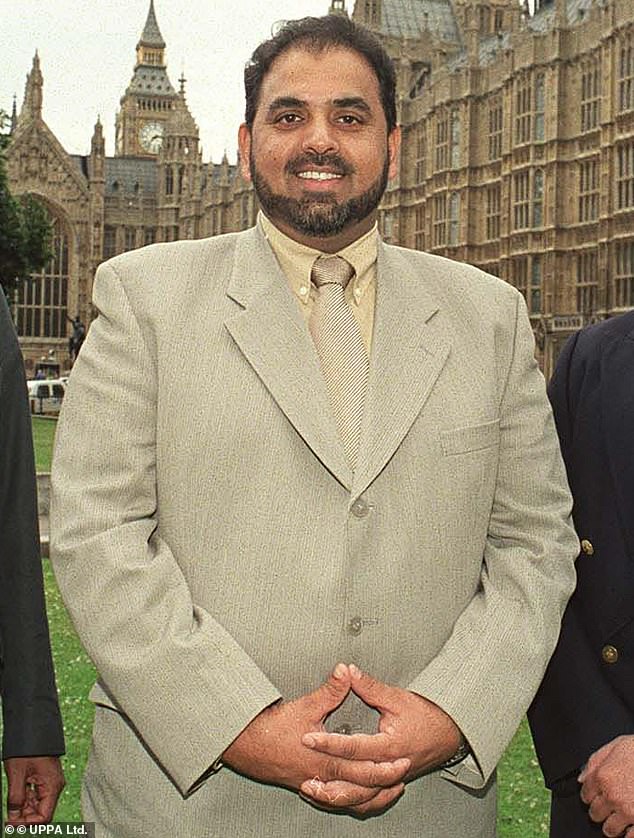 Lord Ahmed of Rotherham  (pictured in 1999) delivered a stern, and on the face of things, quite brave critique of the community he grew up in

‘Maybe because they have broken families themselves. Maybe because their fathers have worked 18 to 19-hour days, and they’ve been out of the house, and nobody is there to control or look after them.’

At the time, Ahmed was given a respectful platform for such contributions to public debate. His status as a pioneering Muslim parliamentarian – whose own immigrant parents worked endless hours in local steel factories – demanded nothing less.

Yet how twisted those remarks now seem, and how self-serving, following his addition yesterday to Rotherham’s extensive roster of convicted child sex offenders.

Hindsight is, of course, a wonderful thing but it’s hard to scrutinise Ahmed’s political rise and fall without wondering how on earth a man so manifestly unsuitable for high office was allowed to grace Westminster’s corridors of power for so long.

The recent trial at Sheffield Crown Court involved a series of vile crimes committed against two children almost 50 years ago. But many of Ahmed’s sexual misdemeanours are of an altogether more recent vintage.

For unbeknown to the jury, which unanimously found him guilty, this wasn’t the first time the 64-year-old peer’s predatory exploits had got him into trouble.

In late 2020, the outwardly respectable community leader – who had been ennobled with great fanfare by Tony Blair – was forced to resign from the House of Lords in disgrace after being found, on the balance of probabilities, to have sexually abused a young woman.

His victim, a single mother-of-two named Tahira Zaman, was one of several whistleblowers who had bravely contributed to a 2019 BBC Newsnight report that accused the married father-of-three of routinely using his parliamentary position to pursue sex with highly vulnerable women. 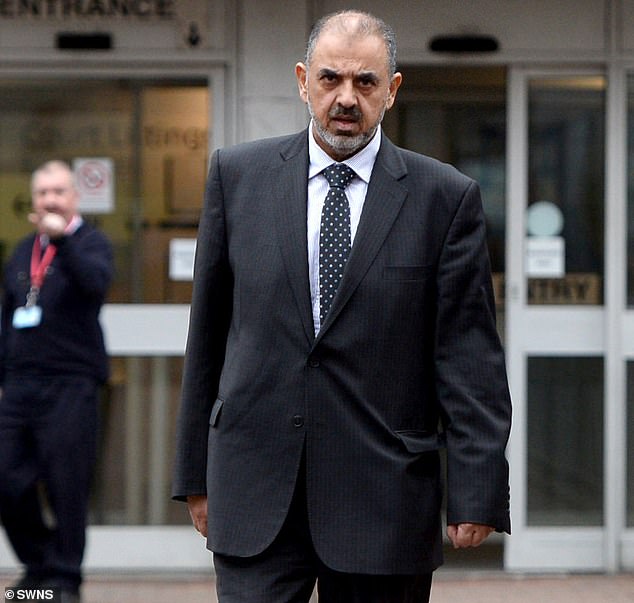 Yet how twisted those remarks now seem, and how self-serving, following his addition yesterday to Rotherham’s extensive roster of convicted child sex offenders. Pictured: Nazir Ahmed outside Sheffield Magistrates’ Court 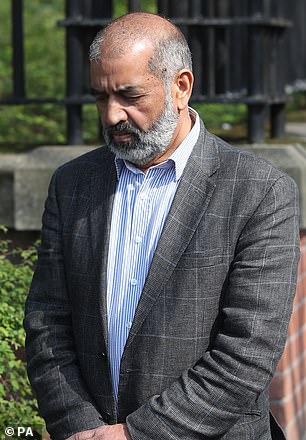 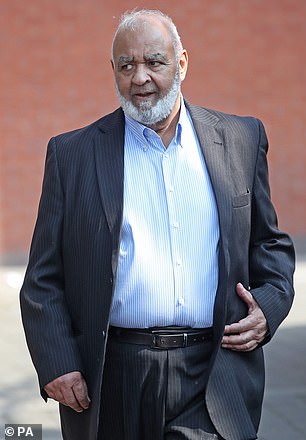 In 2017, Ms Zaman, who suffered from depression and anxiety, contacted Ahmed’s parliamentary office after being exploited by a Muslim faith healer.

After agreeing to write to Met Police chief Cressida Dick on her behalf, the peer persuaded her to join him for dinner, after which he ‘sexually assaulted her by placing his hand on the top of her thigh’, according to a 260-page report by the Lords Conduct Committee.

A couple of months later, Ahmed asked Ms Zaman to attend a meeting at his east London home.

He made her a cup of tea which she believes was spiked with a drug (an allegation he denied) before, as the report put it, ‘sitting on her lap and telling her he was sexually aroused’.

Later that night, she agreed to have sex with the peer. A two-month affair ensued, which Ms Zaman said ended only when ‘he made it clear he wasn’t going to leave his wife’.

She added: ‘He took advantage of me. He abused his power.’

Several other women told similar tales to Newsnight, alleging that they had approached Ahmed for help or support only to be asked for sexual favours in return.

One, speaking anonymously, alleged ‘he basically wanted to sleep with me’. A man also said that he’d witnessed Ahmed propositioning a woman who came to him seeking an internship.

Though none of the claims aired by Newsnight crossed the threshold for criminal prosecution, they were enough to force his resignation, days before the publication of the committee’s report which recommended his expulsion from the House.

The coverage of the allegations seems to have motivated his accusers in the recent trial to come forward.

Yesterday’s conviction completes a remarkable fall from grace for a man once feted as an inspiring role model.

Born in Pakistan-occupied Kashmir, Nazir Ahmed moved to the UK in 1969, when he was 11, unable to speak a word of English. Although teachers suggested he become a car mechanic, he gained a university degree and became a successful property developer.

Having joined the Labour Party aged 18 – around the same time he got married – Ahmed moved through the political ranks, becoming Rotherham’s first Asian councillor in 1990, and subsequently the town’s youngest magistrate.

When Tony Blair ennobled him in 1998, he became the third Muslim life peer, at the tender age of 41.

Home was by then a large detached house on one of Rotherham’s smartest streets, where the couple raised a daughter and two sons. Back then, Ahmed promised to be a ‘voice for the community’ in the New Labour mould.

In keeping with this theme, he soon began to attract attention for making outspoken remarks about the failures of multiculturalism.

In the early 2000s, for example, he criticised the wearing of the face veil, campaigned against forced marriage, and called for mosque sermons to be delivered in English to aid integration.

After the 9/11 terror attacks in 2001, he also called on British Muslims to confront ‘all those who preach hatred’.

Not all of his contributions to public debate were quite so well received by progressives, however.

In 2005, he hosted a book launch in the Lords for a notorious anti-Semite named Israel Shamir, and in 2006 he invited a suspected Al Qaeda terrorist to Parliament.

In 2007, Ahmed described a knighthood awarded to Salman Rushdie, author of The Satanic Verses, as an insult to Muslims, saying Rushdie had ‘blood on his hands’.

Fears about his judgment, by then doing the rounds in Labour circles, appeared to be confirmed two years later, when Ahmed found himself at the centre of an ugly court case.

He was convicted of dangerous driving after his Jaguar ploughed into the back of a stationary car on the M1 near Sheffield, killing its driver, Slovakian Martin Gombar, 28.

Police investigators found Ahmed had sent and received five lengthy texts while driving at up to 60mph on the motorway. The last was sent minutes before the crash.

Originally sentenced to 12 weeks in prison, he was released after just 16 days when the Court of Appeal suspended the sentence.

The affair would, in a roundabout way, lead to his resignation from the Labour Party, after he decided to share anti-Semitic conspiracy theories about what had happened to him on an foreign TV network in 2013.

During an interview with an Urdu-language TV station from Pakistan, Ahmed was asked about his time in prison. He responded that the judge who had jailed him had originally been appointed to the High Court after helping a ‘Jewish colleague’ of Tony Blair.

Ahmed then blamed the length of sentence on pressure placed on the courts by Jews ‘who own newspapers and TV channels’ and wanted to punish him for supporting the Palestinians in Gaza.

Although he issued a grovelling apology when the racist remarks emerged, he was summoned by Labour’s national executive committee. To avoid an ugly confrontation, he quit the party, sitting as a crossbench peer during the final seven years before his forced resignation from Parliament.

Crown court appearances are, however, harder to sidestep than political meetings.

The fallen peer was granted bail last night, and will return for sentencing in one month. The many victims who have chronicled his sexual misdemeanours doubtless hope that his next stay in prison is longer than his previous one.