London: When George Brandis arrived in London in early 2018 as a political appointee, the former attorney-general claimed to have transcended Australian politics.

“I am only a political figure in an historical sense,” Australia’s new high commissioner to the United Kingdom told this masthead at the time. 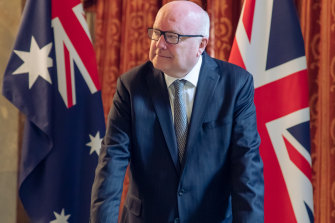 But as Brandis departs Australia House this weekend after four tumultuous years, his reflections reveal how he deliberately approached a diplomatic role in an unashamedly political way from day one.

Brandis introduced staff with political backgrounds into the High Commission so that they could act as links between the stuffy Department of Foreign Affairs and Trade and government — particularly the Prime Minister’s Office — and work the influential Westminster staffer circuit.

Invitations to Australia House parties became the hottest ticket in town, as Brandis threw bash after bash for Britain’s elite and the expat community from satirist Barry Humphries to Prince Charles. 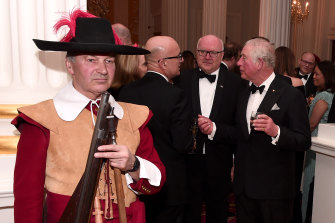 Prince Charles and George Brandis at an Australian bushfire relief event in 2020.Credit:Getty

In Canberra, Brandis’ reputation was one of deep intellect but he was considered by some as rather pompous and aloof.

Britain’s Business Minister, Kwasi Kwarteng, describes the Queensland QC as a “consummate diplomat, friendly, intelligent, and courteous with a great sense of humour”.

“He didn’t lose any time in reaching out to people, with an approachable, straightforward and honest manner as well as an attitude towards just getting things done,” Javid says.

UK Foreign Secretary Liz Truss, the minister closest to Brandis, says he has been a “hugely consequential ambassador”.

Brandis’ term has not been without controversybut he recalls one of Whitehall’s most senior bureaucrats observing that to make a government policy popular in Britain, “all we have to do is prefix something with the words Australia-style and everyone thinks it’s a good idea”.

Australia’s tough China stance has also not gone unnoticed. “Jacob Rees-Mogg said to me quite recently: ‘The most important thing Australia has done for the United Kingdom is not the FTA, it’s not AUKUS, it’s that you have awakened us to the China threat and more than any other country in the world you were the ones who did it’,” Brandis says.

But Australia owes Britain, too. 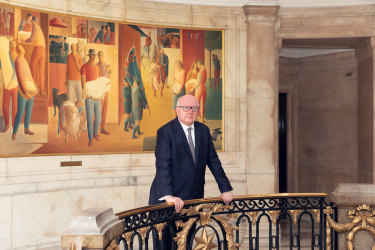 “The FTA is now signed, AUKUS is done, the relationship between Australia and the UK has not been better … This is a terrific time to turn the page,” Brandis says. Credit:Liliana Zaharia

When Prime Minister Scott Morrison put out the call to Australia’s diplomats to source Pfizer vaccines that could be loaned to Australia, just three countries responded: Singapore, Poland and Britain.

Javid remembers taking the first request during a phone call in August 2021. “It’s a big thing to trust another country with something so precious, especially at that time,” he recalls.

But the British knew just how much Australians needed the mRNA vaccines. Morrison was under relentless pressure to speed up Australia’s sluggish rollout – the only end to the lockdowns and border closures that had dominated Australia’s pandemic response.

Europe had blocked export of AstraZeneca supplies at a time when the doses being made in Melbourne were not yet ready. While the vaccine, developed at Oxford University, later fell out of favour over blood-clotting fears, at the time it was considered the workhorse of Australia’s vaccine rollout.

Javid and his adviser, Samuel Coates, who worked in Australia for the Liberals on the 2013 campaign, asked their vaccine taskforce how many doses Britain could manage to supply. The answer was about 4 million. It would be the largest recorded vaccine swap between countries.

Brandis believes much of his success lies with his ability to communicate with former cabinet colleagues in Australia and new friends in Westminster.

But he wasn’t always this sure. Early in his term, while watching a debate at the Commons, he was alarmed to hear a Labour frontbencher misrepresenting Australia’s position on trade.

He texted Australia’s then trade minister Simon Birmingham and advised him to message his British counterpart Liam Fox. From his seat in the gallery, Brandis caught Fox’s eye and gestured that he check his phone.

Fox swiftly rebuffed his opponent and corrected the record in the House about Australia’s true position.

Brandis sought the counsel of John Dauth, a professional diplomat. Assured by Dauth that the Commons texting intervention was exactly what he should be doing to stand up for Australia’s interests, Brandis’ confidence grew.

“From that moment on, I began to appreciate just how much better the outcomes I could get for Australia, of which the vaccine swap deal is probably the best example, by being unabashed about having been a senior politician,” he says.

“There are certain things that somebody who’s been a senior cabinet minister can do that a professional diplomat wouldn’t dream of doing like deal with political leaders and cabinet ministers in the host country in a very direct political way.”

His original mission when sent to London was to secure Australia a free-trade agreement.

As the British system suffered its “political heart attack” as it tried to execute Brexit, Brandis quietly spent the best part of 2020 making friends with cabinet rising star Liz Truss, who had just been appointed trade secretary. 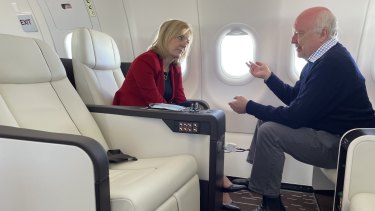 Britain’s Foreign Secretary Liz Truss and Brandis discuss the Australia-UK security relationship on their flight to Sydney for AUKMIN talks.

She became a regular visitor to the High Commissioner’s official residence, Stoke Lodge, attending working breakfasts and weekend croquet matches on the lawns, sometimes even staying on after dinner for a spontaneous karaoke session – usually to ABBA’s Dancing Queen or Waterloo.

“They say that the Battle of Waterloo was won on the playing fields of Eton, our FTA was clinched on the croquet lawns of Stoke Lodge,” Brandis boasts.

But their friendship did not guarantee a deal. Brandis faced enormous hostility from Tory backbenchers and the British farming union, who insisted the trade deal had sold them out. He ended up calling every single Tory backbench MP, and spent a week in Wales talking to farmers.

“I drew upon every lesson I’d ever learned as a practising politician to run a political campaign to sell the FTA to sceptical Tories,” Brandis says. 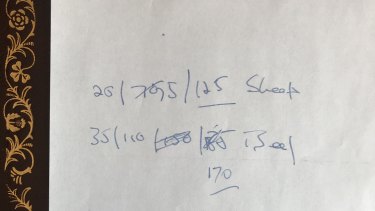 At times, Brandis had to go head-to-head against the British civil service and pit his own political insight against theirs.

This came to a head when Brandis learned the British government was being advised to publicly hector Morrison on climate change with the goal of forcing Australia to sign up to a net-zero carbon pledge in time for the Glasgow climate summit.

Brandis knew Morrison was working on the party room, and that trying to shame the government internationally would derail the backroom gains he was making. Brandis spoke to the Lords Minister for the Environment, Zac Goldsmith.

“I said: ‘Who are you going to trust to interpret politics of the government party room to you? Just trust me – Morrison will sort this’.”

Morrison soon announced a net-zero target in time for COP26.

At 64, Brandis is coy about whether his future holds any further public service. He ends his diplomatic career 22 years to the day after being selected by the LNP to fill a Senate casual vacancy and says he goes out on a high.

“The FTA is now signed, AUKUS is done, the relationship between Australia and the UK has not been better in anyone’s memory. This is a terrific time to turn the page,” he says.